ThoomCare Media Network
TMN: Thoom News You Can Use
Battle with Darshak 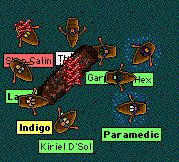 The Darshak invaded Puddleby yesterday. The Darshak invasion was repelled and exiles took the battle to Ash Island, where they were faced with some of the roughest fighting in a long time. Many longtime exiles participated in the fierce battle in the Horde. Click on the images below to enlarge.

Aravir has more on the battle in his journal, including a picture of the invasion of town.

In the second picture of the battle with the Darshak, there are three different colored Warships. The turquoise one's are the normal Darshak Warships. The red ones are Darshak Corsairs. Does anyone know what the blue one's are called?