TMN presents here Ahh's report on the Meeting Hall, located in the southeast corner of town.

The full article is presented below.

Guide to the Meeting Hall
by Ahh

For the longest time I've wondered what the reason and purpose was for having a meeting hall. After all, we can talk freely just about anywhere, why pay to go in a building and do it? I decided to find out more about this presumably little used area. I headed across town to the area near the park. 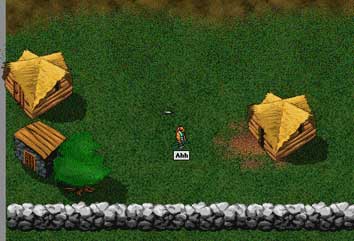 Inside, I met a Sylvan named Mabito. Getting right down to business, Mabito told me:
"You can rent this hall for a public meeting for 20c or 200c for a private meeting of up to 3 hours. Please say 'public' or 'private' if you are interested in renting the hall." 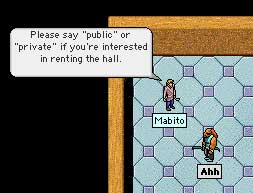 "Pay for a public meeting?", I pondered, "and why not use the Purple Tor for private meetings?" Mabito saw I was an easy mark, and persisted: "Please say 'public' or 'private' if you are interested in renting the hall." I finally broke down and told him "private."

Mabito pocketed my 200 coins quickly, then informed me that:
"You will chair the meeting using this talking stick. You will have the room for three hours, or until you adjourn."

I appeared in the middle of the room holding a talking stick. A message appeared, " Try /use ? to get help with your talking stick should you need it." 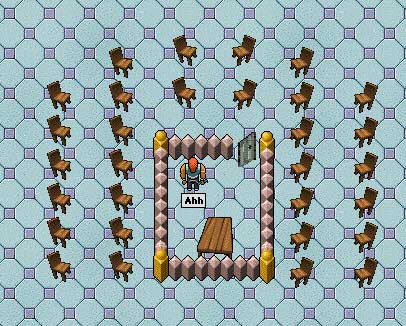 I noticed this huge area could hold many more then a hotel room. Huge groups of people may attend. Apparently whoever holds the stick, commands its powers. There are commands to allow someone to join, speak, be silenced or to even be ejected.

The list of talking stick commands are as follows:
1) To allow one to speak: /USE /TALK

I left and noticed the meeting had adjourned, because I could not re-enter the room without renting it again. Also the talking stick can be dropped but only picked up by you, and it cannot be sold.

What use could the Meeting Hall have? Large groups of people needing to meet and discuss issues, with the capability of keeping meetings free of people who love to cause distractions. The talking stick can allow (if properly used) order in situations with endless debates and arguing. While 200 coins may seem like a lot for this, consider the cost per person when you have large groups in there, and want total privacy.

It appears the only difference between public and private meetings (besides the 180 coins) is that you can't use the commands: /DENY and /EJECT in the public meeting to remove someone, though you can still /QUIET them.

As a follow up, I tried the "/QUIET" command on my unknowing subject, Shen Calin.

As a result, when you "/Quiet" someone they can talk, but it only comes out as whispering, and cannot therefore be completely silenced.
Some of the practical uses of the talking stick could be:

/Use /Quiet /All - Make all talk in the room come out as whispers.
/Use /Talk /All - Gives everyone in the room the ability to speak normally.

In all my years in the lands, I have only seen the meeting hall used once, and that was fairly recently, when Zorton hosted a public meeting to discuss Neige's actions against Manticore at the ill-fated FMOCR a few zodiacs ago. It actually went pretty well (except for the fact that a number of interested people who wanted to be there were still trying to make their way back to town from OC4, and Manticore was in jail).

I'd like to see this resource used more often.