ThoomCare Media Network
TMN: Thoom News You Can Use
Klur in Jail 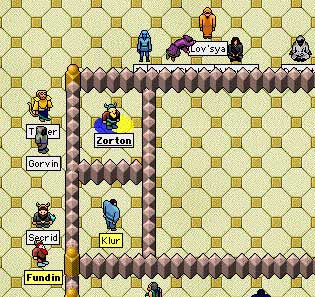 Klur has been convicted in Puddleby Court. Details are still coming in on this story. 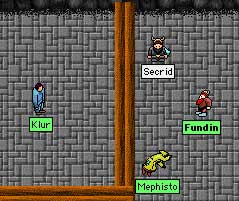 Read below for a report and opinion piece from Fundin, an organizer of the Foothills Expedition and use of the portals that Klur and others intend to disrupt.

"The battle for the portal began just as Zorton was about to leave and I was sleeping. A very exciting moment I have to say, considering Zorton had been hanging round with Valtrim guarding the portal for hours, and I was sleeping with one eye open ready to help. We were getting a tad bored waiting for Klur to make his move, and we knew he would...

So as we sat there, I saw Klur exit the library, 'uh oh' I said to Zorton, followed by Malkor, Reye and Baff it could only mean one thing. Klur, Malkor, Reye, Baff, and Grrr came running into Falinea's gardens with Grrr on a chain, how odd we thought, with Klur and Baff being healers! Now thats recipe for moving the portals if I ever saw one, and no denying it.

So the warning sunstone messages went up and exiles tried to help. Unfortunately, Malkor had decided to surround the entrance to the gardens with Ethereal portals, so only those in the gardens, including myself, Zorton and Valtrim could help, Mephisto, Sabbit and Gorvin (who were hunting on KI heading back through the portal) as did one other exile whose name escapes me (sorry).

After some pushing and pulling, they chained Grrr through to KI. I wasnt exactly sure of their plan but exiles rushed to the courts to try and sue Klur for sabotage of a pre-planned hunt. The first case went ok, considering we had 4 on the jury, 2 PM, Malkor and Baff, and two others, Mephisto and Slyph. Klur was found guilty after protesting his innocence with some waffle about them being dangerous for exiles (why did he use them on Noth then! One rule for us, another for Klur).

By this point I was running dangerously short of time, Klur and his cronies being the cowards they are had picked possibly the best time they could for themselves, and the worst time for everyone else. What do I mean by this, well they decided to attempt their portal horking exercise at 8.40 BST (7.40BST) a time when most US clanners are just heading to bed and most European clanners are at work, and the rest of the world clanners were few and far between.

I see this as a BLATANT act of cowardice and a snivelling backstabbing way to conduct a war as its been labelled, then again we expected nothing less from Klur and his cronies so there you go. Let's take a look into the mind of Klur for a moment. 'I know' thinks Klur, 'as I know everyone apart from a tiny majority of exiles is against me and my viewpoint, if I clan at the time when theres hardly any exiles, and bring my lackeys with me then the plan shouldnt fail. I know most of the US clanners won't be able to outstay us by keeping awake (being west coast) and the European clanners all have to work.'

Nice plan I have to say, undoubtedly the underhanded tactics wed have expected from you. With all the balls in the portal horkers court, we expected to have a major problem stopping you from taking it. Now that you have, expect no mercy whenever you plan to use the portal for anything, I, for one, wished I lived west coast US (OOC) so I could spend more time harassing you.

Standing by your views is one thing, doing it when theres no-one around to contradict you is another, its almost like you were embarrassed or scared to face us when we were all in Puddleby. Low, very low"