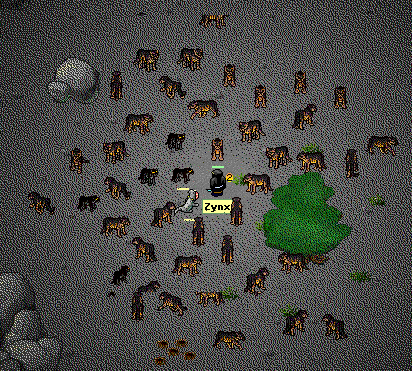 The other day Blackhole and I decided to go hunting in the South Forest/Kitty Beach area. We had barely gotten started on KB when we were ambushed by a horde of boloks. We were overwhelmed quickly. Pe Ell, who came to help, also fell. A friend of mine, Maelmianore, fell as well, departed, and with the help of Su'uub III managed to get the situation under control. I estimate that we killed 50 or more boloks on the beach by the end of it all.

Here is a picture of one of the swarms. This is the swarm that attacked us the first time round.

I've been seeing some large swarms of critters as well. A friend of mine came thru the east town PF from east field and was caught in a massive swarm of slugs. I've been getting into such large number of stuff I'm starting to think I need to start studying how to use a goss just to get to a fallen to heal them!!! Oh right, I can't do that... I guess I need to take a ranger with me on every healing run? well, maybe I'll just stay in town and let the ranger chain people in... GO RANGERS!!