The v999 update would normally have been scheduled for Wednesday 18 January 2017. However because we like round numbers as much as the next person (if not more), we will be skipping that one, in favor of a celebratory v1000 update one week later, on Wed. 25 January. Be there, or be not-round!

Chaos Storm #996 has swept the Lok'Groton island chain. Please post any changes you have observed and wish to share with others in the comments. If you don't want to read possible spoilers, please do not read any further!

12/28/2016 v996
Twenty years from now you will be more disappointed by the things that you didn't do than by the ones you did do. So throw off the bowlines. Sail away from the safe harbor. Catch the trade winds in your sails. Explore. Dream. Discover.  Mark Twain (18351910)

This be actual 2 moseys. First off a couple o zodiacs ago Slyph staggered outta tha liberry covered in cobwebs. Bein as she be creaky with age, she were havin troubles movin. We asked ifn she wanned ta be kidnapped and she didn't say no, so we kilt her and took her ta tha s-est and mountain. First off she were fergitn ifn she were married and stuff but gived her storied history is easy ta unnerstand. We thought tha unnerwater on tha way ta tha mountain were purdy so showed her tha Nyika critter. Then we died and came home. 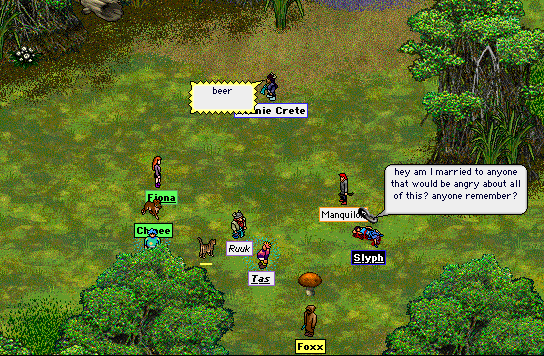 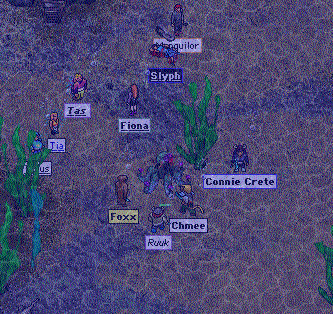 Has been a few zodiacs since then and tanight after tha mosey me and Morv and Manqy went ta tha annulus ta see how its lookin. (This be tha third pitcher apropos o nuthin other'n I aint writ up no story inna long time so is jumblin my thoughts tagither.) Anyways. Jumped. Trapped. Died. Manqy did fire that lasted a long time and got a roverskeleton. Them slugs is tenacious. He's right >> from me. Then he died too. "You are shattered" he said, so we thinks he died while morphed. 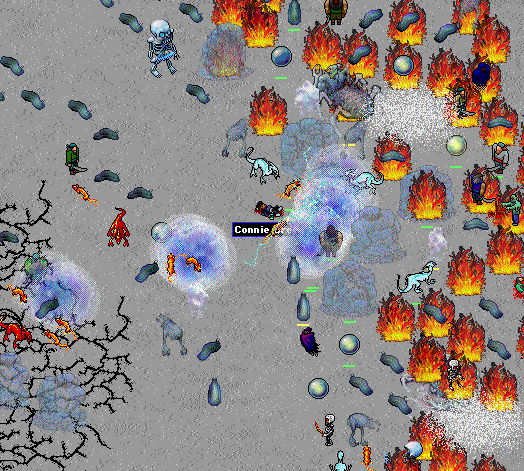 Chaos Storm #993 has swept the Lok'Groton island chain. Please post any changes you have observed and wish to share with others in the comments. If you don't want to read possible spoilers, please do not read any further!

* It's a little early, but we wont get another chance, so...
Happy Bawkmas!
Merry Skristmas!
Happy Thoomas!
Season's Beatings!
* More (minor) modernizations to the Mac client. Once again we hope that the number of improvements exceeds the number of new bugs.
* That client now requires Mac OS X 10.5 or newer.