"Klur, with the help of Pogue Mahone's pet spriggin Malkor, was moving the portals again to set up a small trap. I managed to catch them just as they set it. Folks might be interested in the method they used. They had moved the green portal out of the garden into a spot in south Puddleby, just south of the chapel/Purple Tor Inn and near the gate to west town (Image 1).

"Malkor started to teleport himself and Klur immediately pushed him into the portal (Image 2). Malkor disappeared and the portal vanished with him.

"Of course, nobody knew where the portal was (Malkor asked for money to return it), but someone suggested going through the green mirror on the cloud to find out. So that's what I did. Imagine my surprise after making the long, long trip to find that the green portal was back in the garden (Image 3). I must admit this was quite funny, despite everything. It really was the scenic route I took.

"After I got over my surprise and amusement though, I realized it was a trap: they had positioned the portal just inside the entrance to the garden, so that anyone entering would not be able to avoid falling into it. Quickly, I sent a warning to everyone about where it was, and dragged it away from the entrance. Of course, I could not avoid going through it, but at least I would find out where the other end was. It turned out to be (I think) Dredwood or Snaggy. There were twisty trees and lots of orgas. I managed to get back into the purple portal but got hit several times in the last few seconds by a big orga and fell just as I portalled out (Image 4).

"I found myself back in the garden, with the knowledge of where the portal led and the trap at the entrance still unset, temporarily at least. All that running about was so exhausting that I had to sleep for a while until Harper and Paranoidos found me, fortunately just before Malkor did (Image 5). Haffron also came for the rescue attempt a few minutes later. 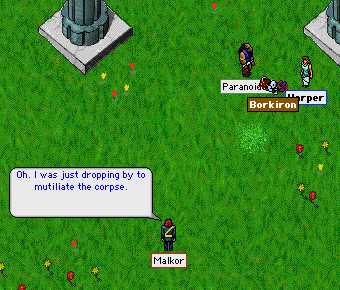 "Later, I found out Harper and Paranoidos had adjourned a University of Puddleby board meeting to come rescue me. I felt guilty about that but even more grateful to them. It's nice to know that there are people who will put their own plans on hold to make the effort to help others, even though there are others whose only plans and efforts seem to be to hurt others. However, I've decided that with the portal moving nonsense starting up again (maybe), it's a good time to take a study-vacation. Bye to all for now, and see you again whenever. Good luck and have fun."

Discussion of the portal trap can be found on the Clan Lord Sentinel.