The most interesting thing occurred outside of Jade Noids recently. It was near midnight (IC) when Blackhole calls me over to Jades to take a look at something unusual. He tells me it is visionstone-worthy. So I trotted over to Jades to see what he is talking about.

Sure enough, something VERY unusual is going on: there is a Jade standing outside the Jades cavern. It is motionless and non-hostile. So, while the other folks are bashing away at the Jades inside the cavern (they were rescuing some folks, I think) I set up my visionstone equipment and started taking pictures.

1. My first encounter with the Jade Noid; at this point I was not sure if it was hostile or not so I kept my distance . . . 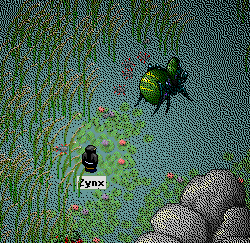 2. This is where I realized that this immobile Jade lacked any mandibles to attack me. Some kind of strange mutation among their species, I guess. 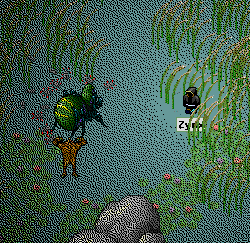 3. Here we see some of the folks that were hunting the hostile Jades in their cavern come out to heal themselves. A few of them commented on the Jade and its predicament while they rested and prepared for another round of Jade spelunking. As you can see, the Jade is injured from a recent attack of leeches. 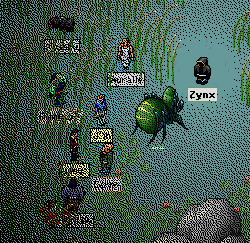 4. Oh, the effectiveness of the Dank Marsh leeches, dangerous to exiles and dangerous to toothless Jades. As you can see the jade is suffering at the hands of some leeches. I did nothing to help because of the pain I have suffered at the hands of his fellows in the cavern below. 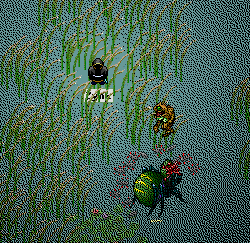 5. By this time, the jade was on its knees, its pinkish blood gushing into the swampy water that it was standing in. I felt, for a moment, sympathetic, but not for long. It filled me with awe to watch tiny little leeches kill such a large and (normally) dangerous beast. 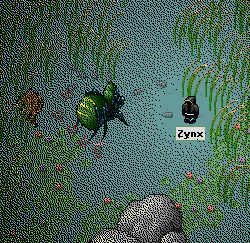 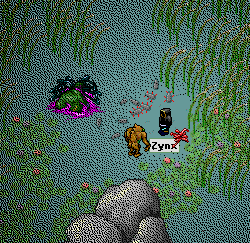 Do you not have OpenGL on your computer or something? If I played and had all those freaking black dots on my screen I'd go batty.

Gah, thanks for the bunch of pictures took forever to load