ThoomCare Media Network
TMN: Thoom News You Can Use
Portal Moved (not) and Okra in East Field. Err...Orga. 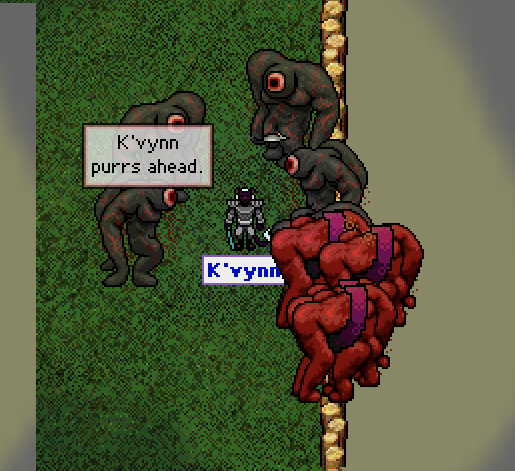 So, Killian posted on Koppi (and Connie let me know) that if i moved the portal to CD he'd pay me 40k. Connie mentioned a commission, i didn't pay too much attention to that . . . Well, that's hard for any poor mystic to resist you know. Although, I'd been happy to move it back if paid to do so. And from what Connie told me, some groups are able to make the entire trek back to village through the Mountain, so I didn't feel too terrible about taking the money. A poor mystic has his research to do and stuff.

I finally managed to catch up with Killian; unfortunately, but maybe fortunately, Connie were misreading when to do what I needed her to do (yup, she were helping) . . . maybe I should have given her some moonshine or something . . . maybe it was cause she didn't get her cut first . . . I were thinking I'd pay her her cut after we did it . . . anyhow, long story short, I broked my stone and thus lost my mark to CD. Porting is easy. Timing is hard for a semi-sober-drunk dorf. Of course, she'll say it's all my fault and I'm not a REAL mystic, but that's OK.

So, fortunately I have a spare--but the portal remains and I was kind enough to give Killian most of his money back.

I was a bit tired from being in the library so long anyway and then there was some excitement east of town--from East Field. I scanned a few times and decided after one BBQ bolt event and Xenos repeatedly asking me where Mork was while I was fallen--I decided if i were going to find Mork, I'd need to get paid. I thought 100c was reasonable. Well, that didn't go over well, I'd have to pay for his healer services from now on if I did that or something to that tune, 500c or something. Which is fine, I'm useless anyway, right? And Stora's free, just give him a beer now and then. Besides, I was sure Mork would be fine, he always comes back up on his 4 blue hooves . . . er . . . feet. I was too tired to remain, but here was one of my scans from the safety behind the east town pf.

Hoping to get out a little more often, but timing just hasn't been good for me lately.

Milk! Kudos to ThoomCare, that old fishwrap, for still posting stories. Enjoying Connie's adventures. Would like to see Misadventure post some!!! (Open Hands).

Hope the late night party survived the orga and weren't ported and spitted and eaten in OV.