Sycamore here. We had quite an adventure on Ash Island the other day and the citizens of Puddleby received an interesting proposition. Opinions vary widely on what our next move should be. Everything happened so quickly that Im sure I have missed some details, but I will do my best to recall as much as I can of our adventures.

As you may recall, a few weeks ago a certain Dorcas Direstorm appeared to the folks who were innocently taking a mosey through Ash Island. After flattening Jo and Mehan with seemingly no effort at all, she announced that her master would be arriving in the near future and that we may wish to speak with them.

On the appointed day, we gathered on Ash Island and prepared to fight through the usual ferals and minor Darshak that one often runs into on the way to Ash City. Once through the PF, though, we could tell that this was going to be no routine hunt. We were greeted by Darshak assassins, Slavers, Brawlers, and Darshak Necromancers. There was lightning everywhere, which was particularly troublesome. We heard someone yell, Get em, Captains! and then we were attacked by Darshak Captains and even more lightning bolts. Suddenly, we all started to fall to Kestrels. I thought for a while that the pirates had moved on from training ferals to training birds of prey. After many attacks and retreats, we made our way through the Ash Barrens to the wall around Ash City. Amdiroth made several threatening statements but we were unclear if they were directed at us or at someone else.

We threw a vine over the wall and infiltrated Ash City. On our way through the city, Kvynn noticed something new. Nestled among the normal plaster houses in Ash City was a newly-constructed stone tower with a purple pennant flying from it. In front of the tower was a burst of magical flame and a figure in a hooded cloak. This was the same Dorcas Direstorm who had appeared at the previous mosey. After a few people tried to approach and fell down, deteriorating, the cloaked figure began to speak. 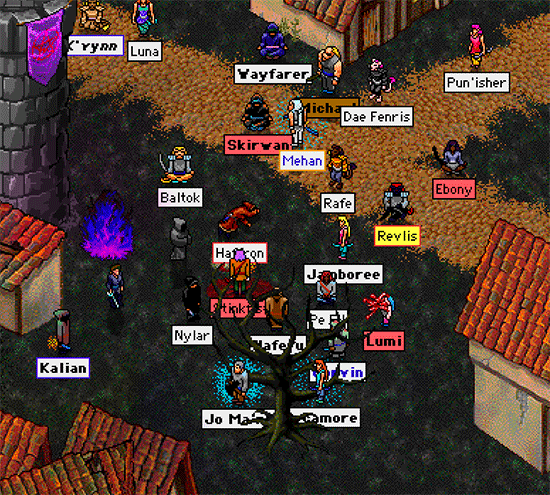 She announced that we had been summoned here to speak to her master. She said that the management on Ash Island was out of hand, and that her master wanted to ask for our help in gathering information. She explained, however, that only two exiles at a time would be allowed inside the tower. After much discussion, Gorvin and I were appointed to represent the exiles. With some trepidation, we entered the tower. 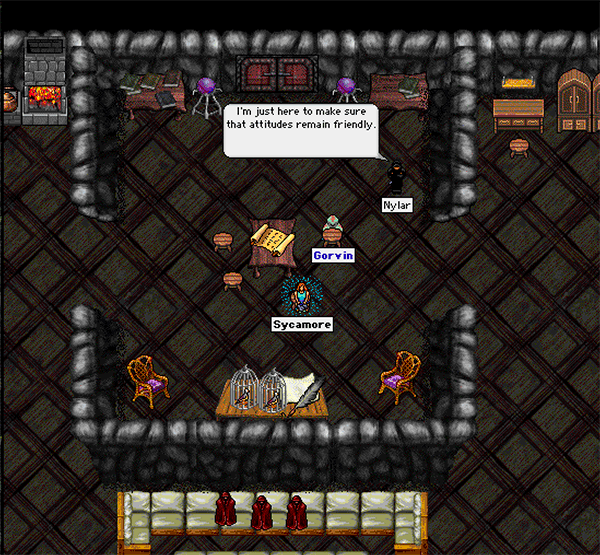 As Gorvin and I walked through the ante-chamber, I looked around. There was a large white couch with three red-robed figures sitting stiffly on it. I saw a desk with two birdcages on it. There was a table in the middle of the office, surrounded by chairs. Nylar was slouching nearby, idly playing with an apple. I wondered if he was the one we had been sent here to speak with, but he seemed to be playing the role of enforcer. After a few moments, a well-dressed pirate came out from some double doors. 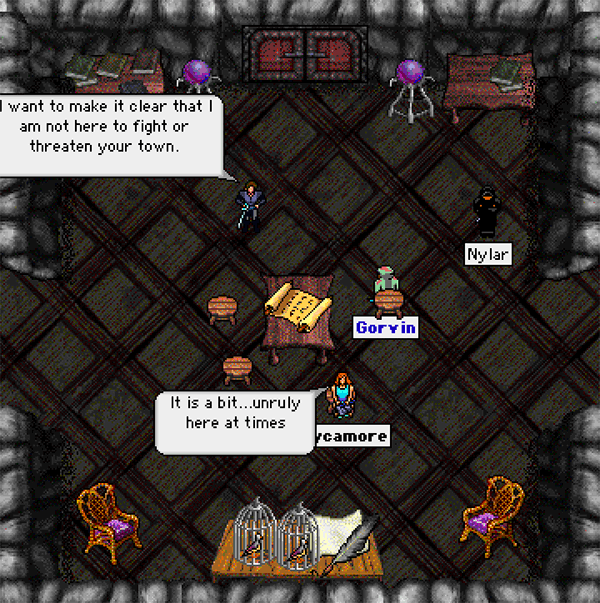 She introduced herself as Kestrel and started off by saying that she was not here to fight or threaten our town. She said that she had come from the Isles of Gathner, where the Darshak Theocracy is headquartered, to assess the management of the Ash Island outpost. She is most disappointed in the job that Amdiroth has been doing. She told us that her society is one of order and refinement, and that the petty captains and second-rate priests did not represent the Theocracy at all. She referred to all of the Darshak raids on Puddleby as purposeless conflict. 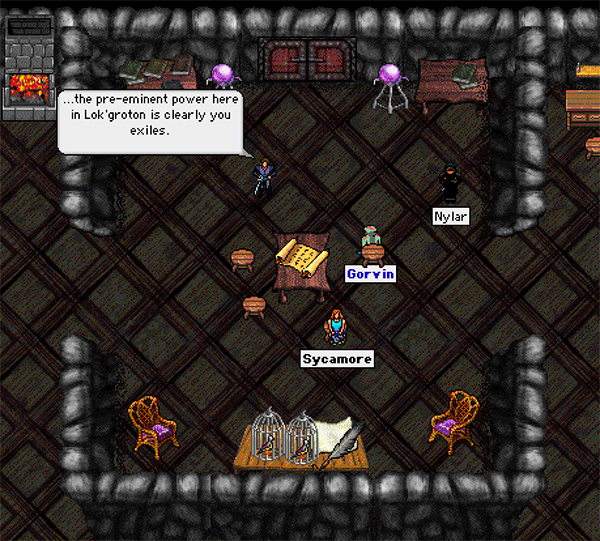 Kestrel went on to explain that she intended to take over from Amdiroth, and that she would like our help in collecting information about both the Darshak and the rebel faction. Gorvin asked how we could trust her, considering that she had recently been attacking us as we made our way to Ash City. Our past interactions with Darshak have not shown them to be very honorable. She replied that it was clear to her that the most powerful society in Lokgroton were us exiles and that it would be foolish to betray us. I suggested that she might make a gesture of goodwill to the exiles. 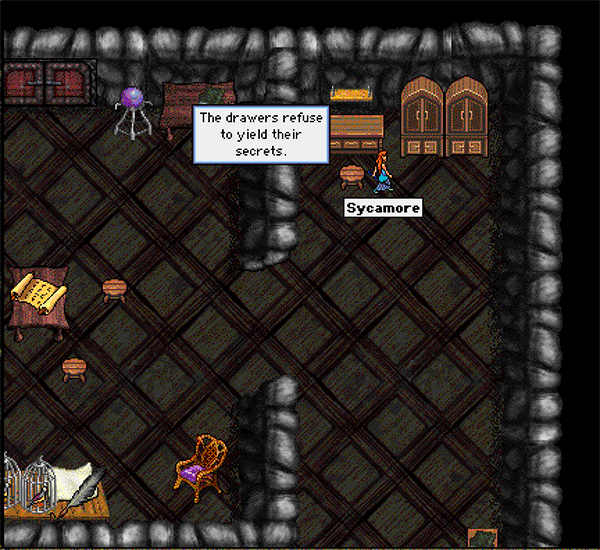 At this point, the sounds of battle from outside grew ever louder and we could hear our comrades hitting the floor. Kestrel sighed and said that she would take care of it. She swept out the door, followed by Dorcas and Gorvin. I took advantage of their absence and rifled through the office. I did not find anything incriminating although there were some desk drawers that I could not get into. The paper in the middle of the table seemed to be a list of bird names. There was a book about navigation and another about LokGroton culture. The wardrobe was full of silk robes. Before I could snoop any more, Kestrel was back in the room, grievously wounded. Apparently her sudden appearance in the middle of the fray prompted an attack and Stinkfist almost brought the meeting to a quick end. Dorcas came back in and healed her with a wave of her hands. We decided to go out and announce her exit so that no more misunderstandings would happen. 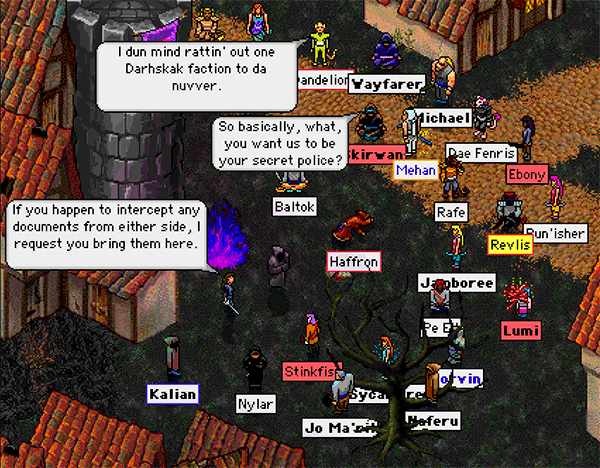 When Kestrel came back outside, the exiles mostly behaved themselves. She explained her position and offered an alliance with the Darshak Theocracy. She conjured images of advanced weapons, shipwrights, luxury goods, and access to new lands. In return, she asked for information: any knowledge that we can get about the Darshak and the rebels. She wants to know everything about their operations, their loyalties, leadership, and activities. She said that if we find any documents, to bring them back to the stone tower and turn them in to Dorcas. She also indicated that Dorcas may have extra jobs for people who prove their worth by bringing documents. Kestrel said that she would return in a few zodiacs to see what we have learned. 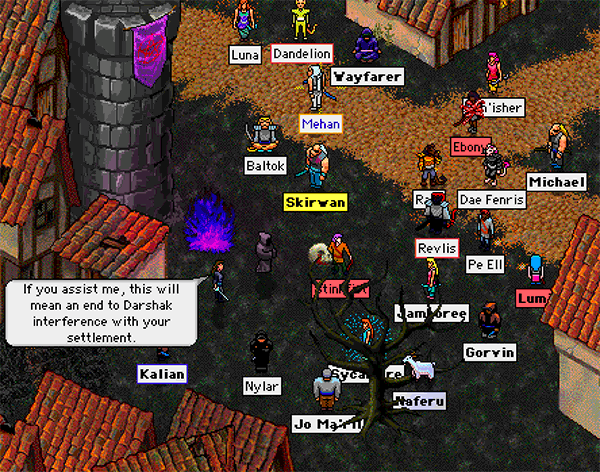 The exiles were still distrustful of her intentions and I reminded her about a gesture of goodwill. She thought for a moment and then offered us a gold-plated bathtub. Dorcas pulled a bathtub out from beneath her robes and presented it to Mehan in apology for killing her so rudely the other day. Mehan accepted the bathtub eagerly and said that all was forgiven. 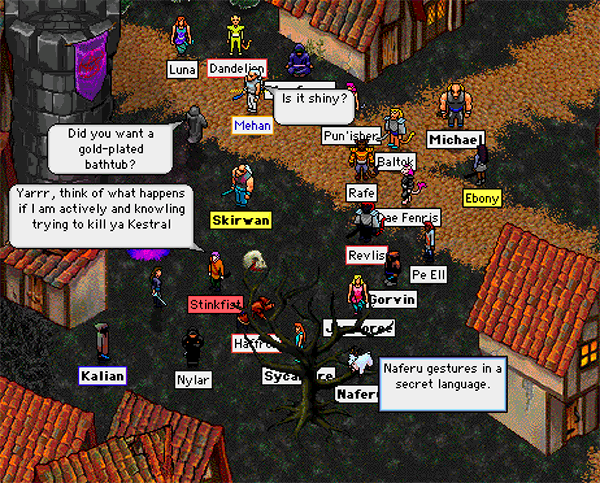 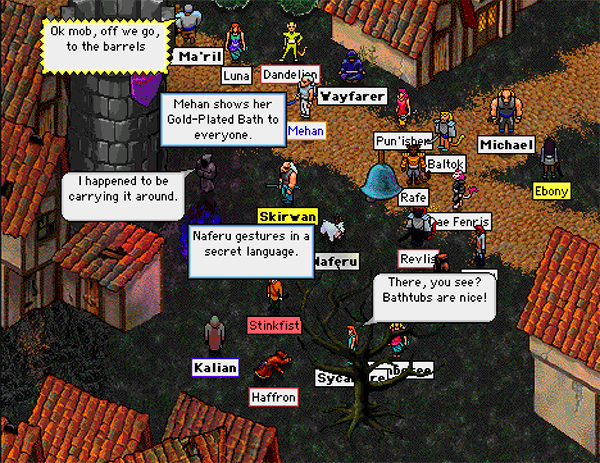 We gathered in town center to discuss what we had just witnessed, and Mehan ran off to install her new plumbing. Some people wanted to gather information for Kestrel, while others wanted to go to Amdiroth and Tyris Drakesblood to set them against this Kestrel. Others suggested feeding them all conflicting information and setting them to fighting amongst themselves. Everyone, however, agreed that the bathtub was magnificent and that we need more like it.

Answer: yes, yes it was shiny!!