Azriel reports on the land of Sarra in his latest journal entry.

Posted by Para at 01:13 AM
Crossing the River 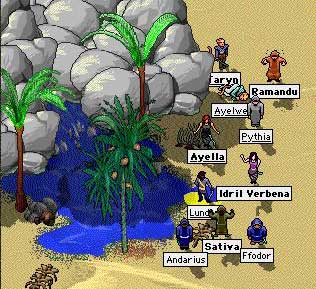 Ayella, Lundar, and Ramandu have made some key discoveries on Gungla Island. Find out more in Ayella's report in the ELF Blog as well as in Ramandu's journal.

Azriel has a report on these and other recent Gungla-related events, as well as a successful FMOCR, in his latest journal entry. You can find out more about the FMOCR by reading Lundar's report in the ELF Blog.

Posted by Para at 12:22 AM
Arista Stainfinger

Lundar has posted a report in the ELF Blog on Arista Stainfinger and paint production in the Alchemy Lab.

The inside of the western gate rat towers underwent some unusual effects after the most recent chaos storm. Exiles were able to pile up on top of each other, and access was gained to a peculiar grey void. You can read more about the rat tower chaos in the ELF Blog.

Posted by Para at 08:24 AM
ELF at Alchemist's Folly 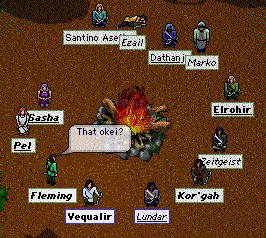 Read about the ELF expedition to Alchemist's Folly in the most recent entry on the ELF Blog.

Posted by Para at 04:07 AM
Gungla Exploration

Aravir reports on Bane of the Black Heart's trip to Gungla Island in his latest journal entry.

Azriel reports in his latest journal entries on expeditions to the Abyss, Melabrion's Keep, and the Foothills.

Chaos Storm #325 has swept the Lok'Groton island chain. Please post any changes you have observed and wish to share with others in the comments. If you don't want to read possible spoilers, please do not read the comments.

Drablak has been promoted to full mystic!

"I'm very proud to announce that the Mystic Council decided to bestow upon me the mantle of full mystic. I'm deeply honored and happy to take on these new responsibilities.

"P.S. thanks to all the well-wishers who sent nice comments during the event; I was a bit overwhelmed by it all and could not answer most of them, but every one of them made me happy."

Exiles are sharing their thoughts about K'Pyn on Clan Lord Sentinel.

Farhope and the Winds of Dawn clan are organizing a Second Edition of the Spring Farms Cleaning Hunt.

Says Farhope: "It's time to show again to the farmers that we support them ... and to the vermines that we will kill them all when they dare to invade our farms."

Reports are coming into TMN about the recent appearance of Senfantia.

"Senfantia says, 'I will come to town from time to time to sell pages. If you are interested in funding my research, you may find me in the castle.'"

"She were sellin big blue fires and lil blue fires. She says she be workin on other stuff. She says she lives yonder in Colmert's castle. She says she'll be comin back ta town and tha reason that Colmert be hard ta find be that he dont wanna be bugged.

"Behr, Richard, K'vynn, Sativa, and Sunblaze all asked her questions so they prolly has a more complete take on what all she said than I does."

"I heard from Xyn D'El and Lokar today that a merchant called Senfantia had been in town earlier selling a few phantasm spells, on pages. One of the spells was the normal small purple flame. It was sold to a few people, Behr, K'vynn, Catherine Cain, and Sativa among them. The other may have been a larger flame spell as well. No idea if the spell has any affect other than creating a large flame, though. The above names mentioned are all mystics, but Lokar said it was not only available to mystics. Xyn reported that the phantasm trainer has returned and that it's possible to train beyond the 50 training limit there was originally. It sounds like something that needs investigating further!"

In related news, Lundar reports on searching for Senfantia on Gungla Island in a recent update to the ELF Blog.

Posted by Para at 10:55 PM
Flags and Chiggers

Sunblaze reports in his journal entry for February 13, 2004 on a flag party in town that ended in a chigger and Juliosaur attack.

Norm's journal entry for 55 Spring 553 (2/14/04) contains a full report on Sor's recent unveiling of his latest piece of art, a portrait of Yor, for the Puddleby Museum. Sunblaze also tells of this event in his entry for February 12, 2004.

Distortions sent to TMN this picture of a recent Thoom line. 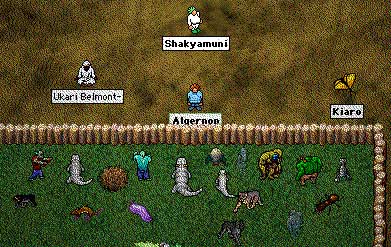 Shakyamuni sent to TMN this image of a recent collection of animals in the Puddleby Zoo.

Posted by Para at 04:01 PM
Himitsu on Training

Himitsu looks at some of the issues surrounding training in her recent entries for February 8 and February 9.

"At 12:12pm on Soldi, day 36 of Spring, 553 IC, Hepta successfully obtained a strange stone. A small, but gallant group of exiles assisted her. Everything went very smoothly and the entire raid took a mere two IC hours (about 35 OOC minutes). I would like to thank all the exiles who contributed to this raid. It wouldn't have been possible without you. Graha!"

Posted by Para at 11:08 PM
Hunting the Valley with Feauial

Feauial reports on a expedition to the Valley in his latest journal entry.

Aravir's latest journal entry includes a report on a trip to the passes during a Bane of the Black Heart clan hunt.

Posted by Para at 10:47 PM
Exploration Experience with Azriel

Azriel reports on an expedition to Kismia's Island and on trips to out-of-the-way places in his latest journal entry.

"All exiles are kindly invited to attend the official preview of my new painting, in the Puddleby Museum on OOC Thursday Feb 12, 2004 at 11 am PST. That should be the 47th day of Spring, 553, around 9pm in Puddleby time.

"Don't miss this very special and select event! There will be free beer, snacks and local delicacies, a few surprises, but most important . . . the very cream of Puddleby! Elegant sylvan babes in their best dresses, handsome fens in tuxedos, freshly washed and groomed dwarfs and zos, thooms in wigs, you name it!! :D

"The ceremony should last a short half hour, and allow everybody to attend their usual hunts or whatever. Please bring this invitation card, and a pie if possible."

Posted by Para at 12:48 AM
Clans Directory Needs Updates! 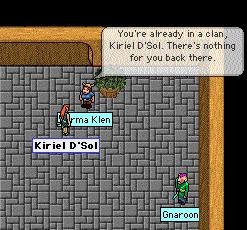 The Winds of Dawn hosted Clans Directory is asking all clans to please visit the directory page and send in updates to their clan information. Make sure your clan puts their best foot forward and help make it easier for newer Puddleby residents to find a clan that meets their needs!

Posted by Kiriel at 11:34 PM
Goldifen

Drablak reports to TMN that the movie "Goldifen and the Three Bears" is now available at his Web scroll.

The ELF Weblog is off to a great start. There are too many entries for me to link to each one individually. I recommend you check it out.

Aprender has sent his new map of Tanglewood (warning: image is 808x794 pixels) to TMN, along with the following commentary:

"A recent project of mine has been to draw for myself a new map of the Tanglewood, based on the existing maps of Drablak and the Sun Dragon clan (rather than my own exploration). The new map looks very different from current maps, as I not only used a different method of indicating the paths between areas, but also a new scheme for naming and distinguishing each area."

Aprender has asked that exiles please leave comments or suggestions regarding his map here at TMN. He's interested in hearing feedback based on the observations of other exiles.

Sor sent this report to TMN:

"Recently, I had the good fortune to meet Kalian right as he was starting to set up the Fashion Exhibit with Muzea. So I handed her my former Rainbow Knight attire, including my beloved purple helmet. I hope the museum is well guarded, because there are priceless wares displayed there now! Anyway, I did a couple sketches of the setting up by Kalian & Muzea -- unfortunately I had to go and missed the model for Slyph's bikini getting, uh "dressed". Damn! I recommend this fine exhibition to all your readers!"

** Koppi yells, "Muzea reports: Visit the Puddleby Fashion Exhibit, on display for a limited time in the museum!"

Aravir also has a report on the Fashion Exhibit.

"Shaky organized a mob recently what were good fun goin yonder ta tha foothills. While most foothills travelers be familiar with this critter, it were tha first time I dun saw it. Mangy fur ifn ya asks me.. it ended up only bein 9c. I have hopes it were a sickun and tha relatives be as furry as tha SAS.

"This be a 'Large Midnight Wendecka.'"

Posted by Para at 05:42 PM
Dragons and Elephants 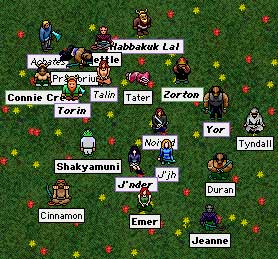 "The Order of the White Elephant and Sun Dragon Clan recently had a joint hunt in the Foothills. No real hiccups, and with the grand mystic skills of Zorton, and the leadership of Yor, we all made it home safe and sound. Tonoto also came, but he was too shy to be in the sketch."

Posted by Para at 05:20 PM
Battling the Darshak

Distortions sent to TMN some images of a recent Darshak battle.

Sunblaze reported on this invasion in his journal entry for January 31, 2004

The sea has a new look today.

Thanks to Kani for tipping me off to some changes at the Castle Alliance fort. Anyone have a report on the specific recent improvements?

The Chaos Storm has had unexpected and unprecedented effects at sea and perhaps elsewhere. Please file your reports under Comments.

Sunblaze has more images available in his journal entry for February 4, 2004, as does Aravir in his latest journal entry.

Chaos Storm #323 has swept the Lok'Groton island chain. Please post any changes you have observed and wish to share with others in the comments. If you don't want to read possible spoilers, please do not read the comments.

Azriel has posted an excellent account of a recent drake invasion and subsequent rescue. He also reports on a trip to the Tok'Han den within Melabrion's Mines.

Sunblaze also has a report on the Drake attack in his journal entry for February 2, 2004.

"I'd like to announce that clan E'las Loth'mon Ferindril has started a new weblog. It can be found at: http://www.ferindril.org/blog/. Below is a press release from our Clan Lord Fleming:

"We call these recordings a "weblog". A web reminds us of how the individual adventures of our members in the Lok'groton intersect and weave together into something greater. A log because we have chosen to record our adventures as carvings on these massive fallen tree trunks in this grove where you are now standing.

"Enjoy the shade and feel free to fill in the margins of our stories with your own comments.