ThoomCare Media Network
TMN: Thoom News You Can Use
Getting Jaded

Sunblaze has a report on adventures at Jade Noids and in South Forest in his journal entry for 78 Winter 553 (January 29, 2004).

Posted by Para at 01:01 AM
That Night We Went Down to the River

Azriel reports on a trip to Kismia's Island in his latest journal entry.

Posted by Para at 12:32 AM
Sunblaze Explores Gungla Island

In his journal entries for 64 and 65 Winter 553 (January 25, 2004) Sunblaze reports on some recent expeditions to Gungla Island.

Sunblaze is also holding a contest for the design of a dragon icon.

Posted by Para at 10:38 PM
Digging Dwarves and Advancing Healers

Aravir reports on changes in the Puddleby Underground and Maquiladora passing the third circle healers' test in his most recent journal entries.

Posted by Para at 10:27 PM
Lameer and the Mirror Room

Recently on Clan Lord Sentinel, exiles have been discussing the old pre-Ripture War Mirror Room. Back before the Ripture War, many exiles (including myself) would repeatedly run "the circuit." The circuit involved running from town through South Forest and then passing through the Mirror into the Mirror Room. From the Mirror Room, we would go to one of various destinations through the mirrors there before returning to town and then repeating the circuit. Unfortunately, during my many runs through the Mirror Room, I apparently never bothered to make any sketches. The only images I have been able to find in my archives are the ones below, apparently taken by someone named Lameer. I don't know who Lameer is. I have a vague recollection of grabbing these images from a long-gone Web page (at least, I assume it is gone--does anyone know otherwise or know anything about Lameer?)

Posted by Para at 12:48 AM
Vermine Problems

Reports on recent vermine-related invasions can be found in the journals of Feauial and Sunblaze.

Posted by Para at 04:33 PM
The Amazing Chainer

Azriel has a report in his latest journal entry on expeditions to Kismia and Gungla Islands.

Chaos Storm #321 has swept the Lok'Groton island chain. Please post any changes you have observed and wish to share with others in the comments. If you don't want to read possible spoilers, please do not read the comments.

Posted by Kiriel at 01:26 PM
Boars, Wyrms, and the Mirror

Hor reports on Edarians in the Rocky Cavern in his latest journal entry.

Fundin reports that he has given up on his Mirror Quest.

Sor sent the following report and images above to TMN:

"Here is just a small account of exiles spotting a new species on Gungla Island, and trying to tag it. According to fighters, the Baby Plesio'don is harder to hit than a Sun Wyrm -- and indeed it was a tough fight!"

Sunblaze has made available an account of a recent orga invasion.

"Many thanks to those who participated in this contest and submitted such
excellent designs. The results will be announced on January 23, after some
time for discussion on comp.sys.mac.games.adventure and on the Sentinel."

Azriel reports in his latest journal entry on further exploration of Gungla Island and a rescue at Wisher's Gate.

Phroon has news about the new alchemy kit in his latest journal entry.

Posted by Para at 08:05 PM
ELF Says Farewell to Nephilim

Lundar reports in his latest journal entry on a clan expedition to Gungla Island and on saying farewell to Nephilim.

Lorikeet sent to TMN this image of some massive healer power being used to raise Rathgorn after he fell in the Scarmis debacle previously mentioned on TMN and in Aravir's Journal. Unfortunately, healers were unable to raise "a messenger" (seen on the left-hand side of the image). Archemar sent to TMN this transcript of a conversation with "a messenger."

Aravir has a report on the warning from "a messenger."

Feauial reports on a Death Vermine invasion in his latest journal update.

Posted by Para at 11:47 AM
Gungla Rescue 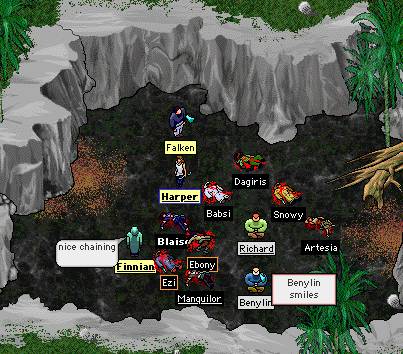 Blaise sent this report to TMN:

"Spent a busy day rescuing people in the new area. One of the rescues snowballed as--one at a time--the small groups of rescuers who came to help were themselves added to the body pile. (That's me in the middle!) This sketch was made after several got chained to the pit. (Thanks Falken!)"

Drathos sent this report to TMN:

"I found this on GI today. It is called a "Wumpa Gourd." No clue what its use is though!"

Posted by Para at 11:16 AM
Exiles Fall in Scarmis Pit

Aravir reports on troubles for exiles in the Scarmis Pit in his most recent journal entry.

Posted by Para at 10:53 AM
Clan Lord Design Contest Deadline

The deadline for the Clan Lord Design Contest is this weekend.

Azriel has posted a report on Gungla Island in his most recent journal entry.

Lundar also has a report on Gungla Island.

Posted by Para at 06:57 AM
South Melabrion's Island

Slyph sent these images to TMN, along with the following report:

"There have been a few muggings in town recently, around the town gates by small groups of female fens. They might be orphans."

Lundar sent along some additional information:

"A new clan was formed today (day 78 of autumn) by the name of 'The Violent Fens.' The clan was founded by Andrea, Unagi, Yasnaia, and Bat, with the help of Manx. I saw a number of their members harassing exiles in town, so they are really living up to their namesake!"

Posted by Para at 11:57 PM
Lundar Saves the Day

Lundar has two new reports in his journal. In the first entry, he tells of making a mark in the Foothills and rescuing his clanmates in Melabrion's Mines (see image above). In his second entry, he reports on the recent FMOCR that went well until the end, when a stone was not recovered.

Himitsu has a report on a recent trip to the Ethereal Plane in her latest journal entry.

Azriel reports in his latest journal entry on exploring the brushy passage east of Puddleby. He also reports that he has completed his training with Rodnus.

Chaos Storm #319 has swept the Lok'Groton island chain. Please post any changes you have observed and wish to share with others in the comments. If you don't want to read possible spoilers, please do not read the comments.

New news items are rolling in. Thanks to those of you have submitted news items via the ThoomCare Drop Box (recently redecorated by Odesseus) and have contributed to the new TMN advertising campaign in downtown Puddleby.

Himitsu has a report on the Bawkmas play in her latest journal entry, as well as an account of a recent Dal'Noth expedition.

Azriel reports in his latest journal entry on a FMOCR that went well until the end, when a stone was not recovered.

We seem to be passing through the post-Bawkmas news doldrums right now. More news as things develop.

Posted by Para at 11:33 PM
Noids and Chocolate

Feauial has updated his journal with news of expeditions to the Noid Cavern and North Forest. 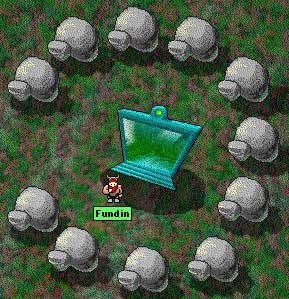 Fundin has started a new quest for information about the South Forest Mirror. Fundin's quest supercedes my earlier Mirror Challenge, which did not prove fruitful.

Posted by Para at 10:48 AM
Lundar Acquires Orga Stone

Lundar tells in his most recent journal entry of how he obtained an orga stone in a recent FMOCR.

Kirth Gersen, Lirr of Singdeep, and Bron Sgurr have left Puddleby and returned to their homelands. You can read their farewell in his final journal entry.

Hor and Jinx show their backs to bears in the above image from Hor's latest journal entry. 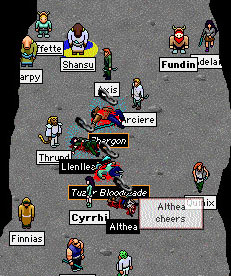 Rescues at the Jade Noid cavern have been the talk of Puddleby. Fundin and Azriel both have reports.

Azriel's report also includes an account of a recent expedition to Kismia's Island.