ThoomCare Media Network
TMN: Thoom News You Can Use
Carnival! 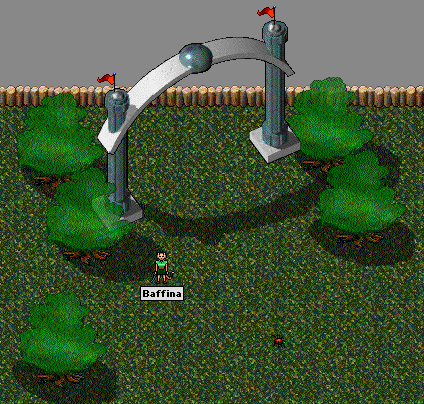 Baffina sends word to TMN that the Carnival has returned to Puddleby. 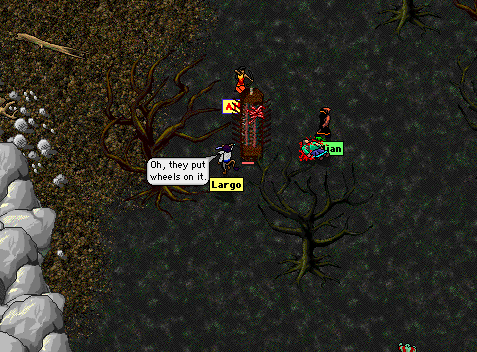 Fen President Largo reports on the use of new weapon technology by the Darshak. 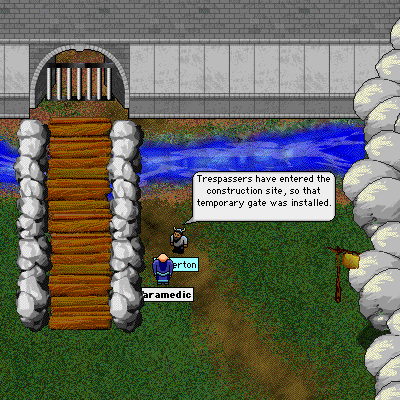 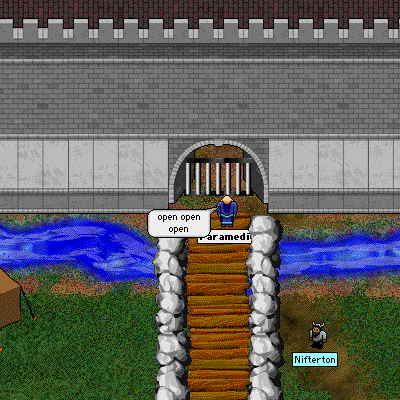 Posted by Para at 05:32 AM
Cammie Updates: Noids, Biting Bunnies, Toks, and More 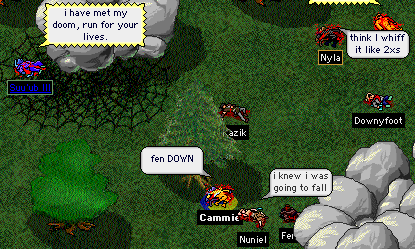 Posted by Para at 05:22 AM
Orga Invasion; Orga Curious About Exile Journal

Fishylish reports on an Orga invasion in her most recent journal entry.

Posted by Para at 05:07 AM
The Wizard of Peaceton

Puddleby Players is proud to announce a performance of an innovative playa musical!

It is called "The Wizard of Peaceton."

This will be a fun musical! Almost all of the songs and lyrics were written by highly esteemed bards and are cool to listen to.

We do not expect to release a visionstone, as technical difficulties cause the singing to be out of sync with the music.

We may have a more euro-friendly performance earlier on a weekday in that same week, but that is still being worked out.

Posted by Para at 04:51 AM
Twinkly Lights 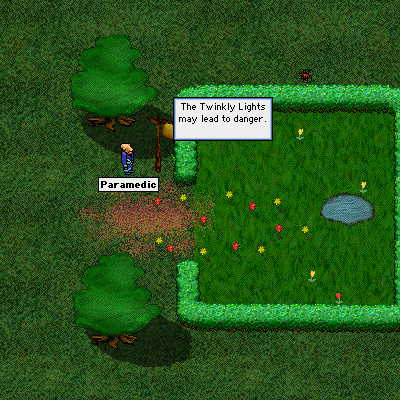 A new warning sign has appeared outside Falinea's Temple.

Chaos Storm #600 has swept the Lok'Groton island chain. Please post any changes you have observed and wish to share with others in the comments. If you don't want to read possible spoilers, please do not read any further!

* No crashes in 111 days and counting. The record is 723 days.
* Youll have to explore to discover the rest of this Chaos Storms changes. Enjoy! 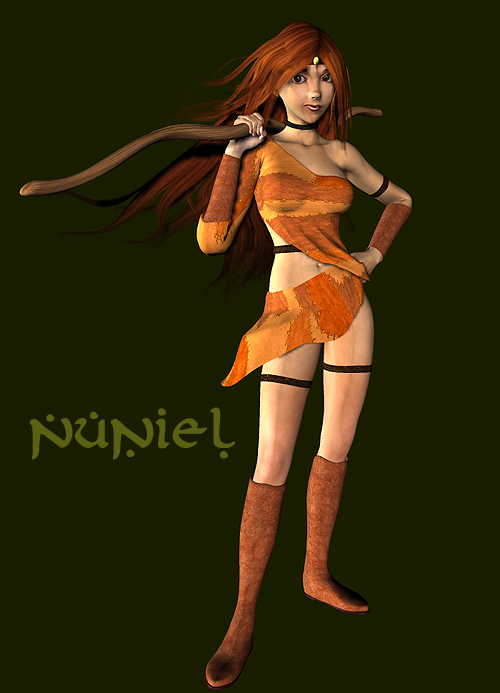 Nuniel sent to TMN the above self-portrait.

Posted by Para at 12:12 PM
Large Crowd for Trillbane Trip 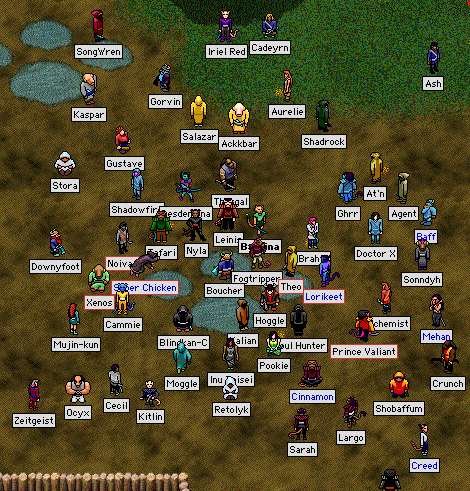 Baffina sent to TMN the above picture of the turnout for the Trillbane trip.

Posted by Para at 06:03 AM
Iriel Red's New Journal: Myrmfodder 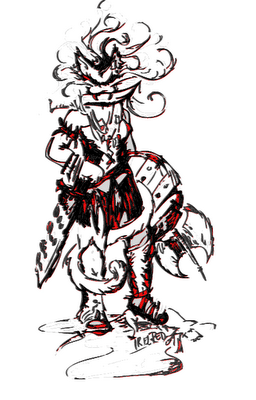 Posted by Para at 09:40 PM
Kisa Sketches: The Cloud, Doggle, and More 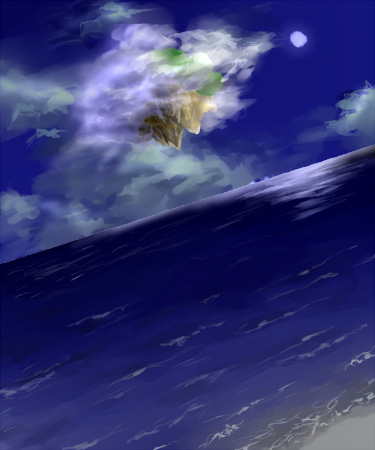 Kisa has posted several new sketches to her journal. 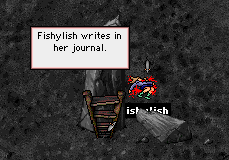 Posted by Para at 09:26 AM
Return of the Winds of Dawn

Some News! Check the temperature in the Abyss!

Winds of Dawn will be holding brief clan meetings at 10 ET / 9 CT / 8 MT / 7 PT on Thursdays. Meetings will be followed by a hunt or a Newbie-oriented activity. All who would like to participate or help (not just clan members) are welcome! 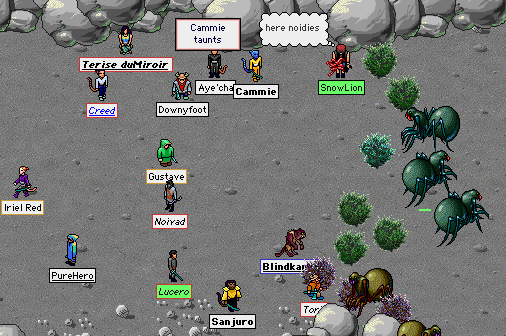 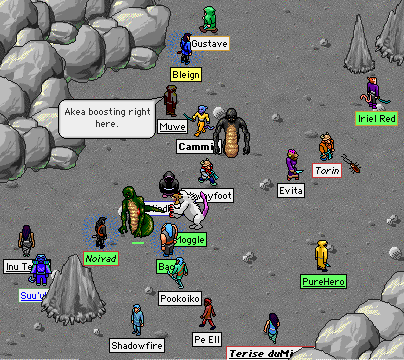 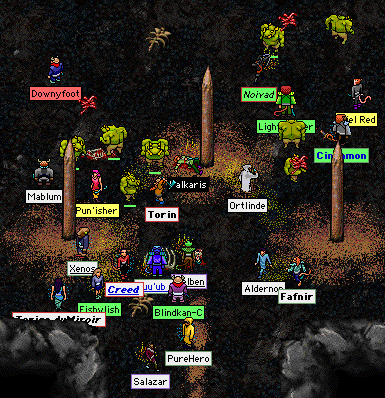 Torin has added some new entries to OWE News:

Chaos Storm #597 has swept the Lok'Groton island chain. Please post any changes you have observed and wish to share with others in the comments. If you don't want to read possible spoilers, please do not read any further!

5/6/2009 v597
In the face of the void, and in the absence of the deducibility of space, recourse to place becomes tempting indeed.  Edward S. Casey

* One especially lowly and mousy gerbil got new running shoes.
* No crashes in 90 days and counting. The record is 723 days.
* Youll have to explore to discover the rest of this Chaos Storms changes. Enjoy!

Fishylish has updated her journal with the following new entries:

Posted by Para at 05:28 AM
Creed Reports on the Cinco Invasion 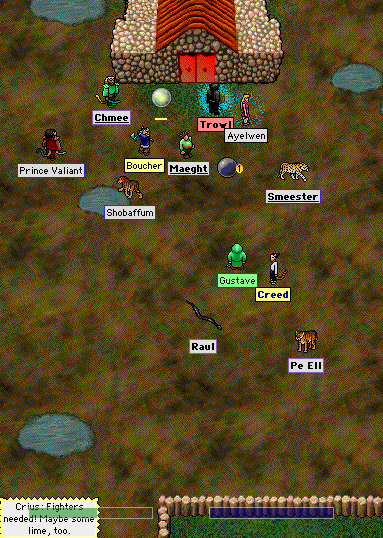 What a fun and challenging invasion we had last night. I just wanted to add a few sketches to Nuniel's account of the excitement.

The gods sent several waves of amusing creatures to challenge our strength and wits. First were beasts that resembled Astral Guardians but were called Coronas. As you can see from my first image, Crius even took on a bit of a sense of humor and called for limes! The next wave of creatures resembled herpetids but were very powerful and called Cincos. Alas, I didn't get a sketch of these.

Next there was a wave of Tequila Wurms, Darshak Tacolytes, Azurritos, and a wave of slime-like Guacamole. I didn't manage to sketch the Avocadoes, which resembled moving kudzu, but I did grab just the very edge of a Vio"ole"ne Arachne (LOL). 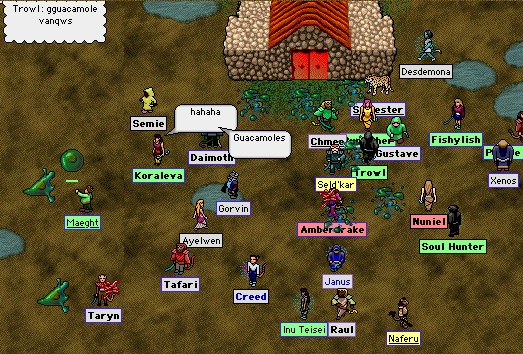 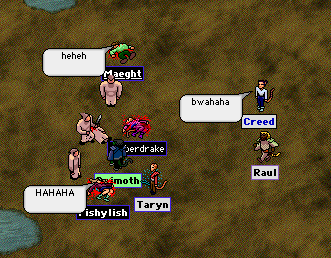 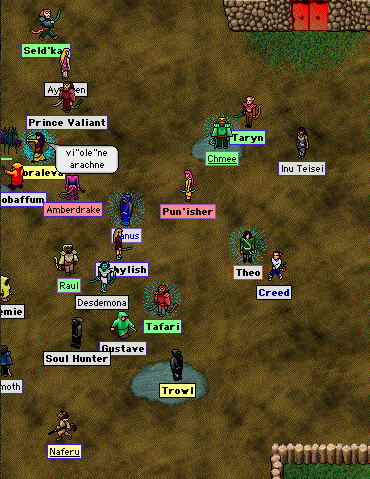 Many of the creatures were very deadly, and it took the exiles a good while to defeat them all. But it was all very funny and in good humor. Thanks again to the gods for granting our prayers for amusement and ranks.

Posted by Para at 12:29 PM
Nuniel Reports on Invasions 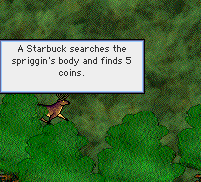 Tis I, Nuniel, which sends thee well wishes and what news of the land.

First off, t'was in the Spirit Wood seeking K'vynn. Many spriggins wert smooshed and a starbuck happened to wander in. Who knew deer hath need of coin!

Secondly, we in Puddleby experienced a number of invasions, one in the afternoon and several waves in the evening. I was, as usual smooshed early on, but I happened to fall in good company! Whilst fallen, I stubbornly kicked at a rat. Some rats art apparently kinky! 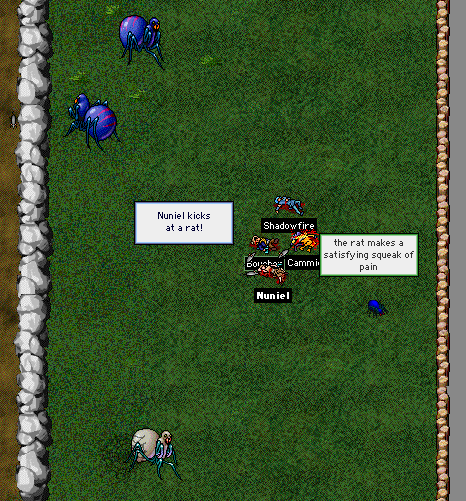 That night we hath a number of invasions by FAH, litches, and a few Greater Deaths! I got smooshed and dragged off to a lower portion of Town Center where the rats hath great fun of me... 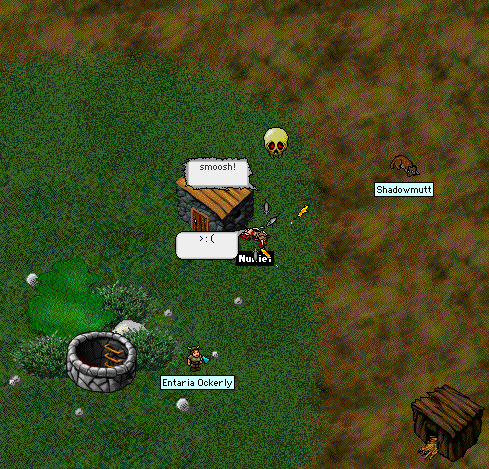 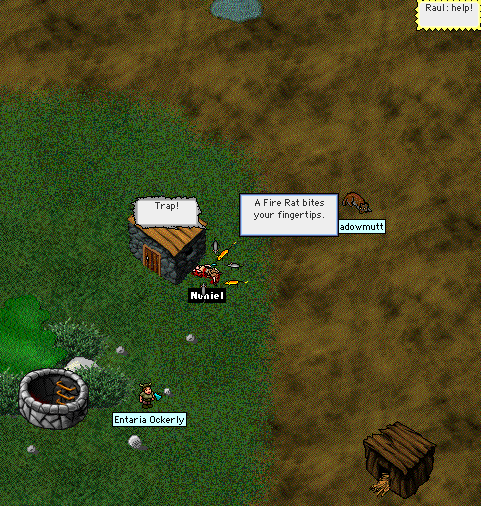 Defiantly, I stuck out my tounge at a Greater Death! T'was all i couldst do. 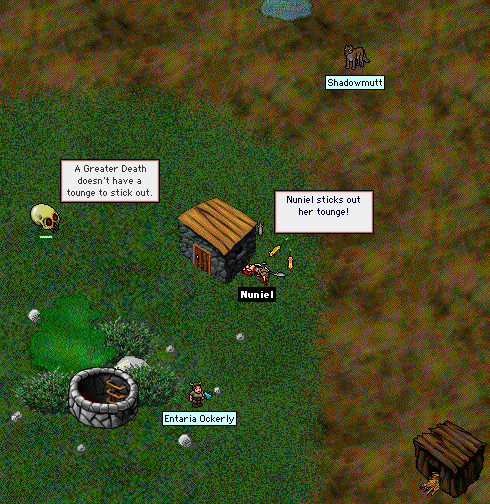 I was raised by our great healers and managed to entrap a litch (or is that a GD?) by the north wall jump point! 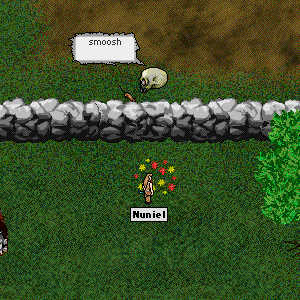 All in all, t'was wonderful seeing everyone pulling together and smooshing mightily!

Org du Lac is updating the Bestiary again. His Bestiary is a valuable source of information on the various creatures to be found in the lands.