Chaos Storm #708 has swept the Lok'Groton island chain. Please post any changes you have observed and wish to share with others in the comments. If you don't want to read possible spoilers, please do not read any further!

* Huan Husbard and his colleagues, who had had a totally fantastical and fictive grasp of their respective inventories, have been brought back to reality... insofar as thats even possible.
* No crashes in 199 days and counting.
* Youll have to explore to discover the rest of this Chaos Storms changes.

Posted by Para at 10:47 PM
Spreading Flames and Myrm Invasion 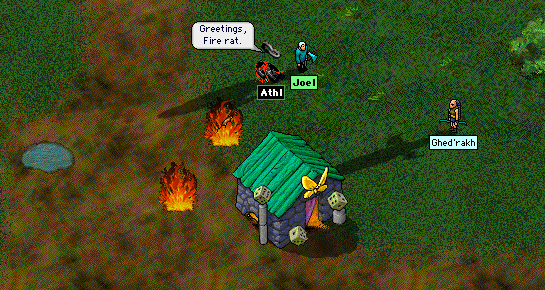 While on the way back to town from a hunt, Joel and myself encountered a ball of flames in the distance that seemed to start chasing us. Upon closer inspection, it appeared to be a rat (see above); completely unharmed by the flames, it proceeded to attack until we also caught on fire. The fire didn't burn, and I can't quite describe the feeling it gave, but it was definitely a rush! Anyone or anything coming in contact with it also caught on fire, so it spread quite fast, and if you weren't already in flames, you were quickly chased down by others and made so, as horrible as that may sound. 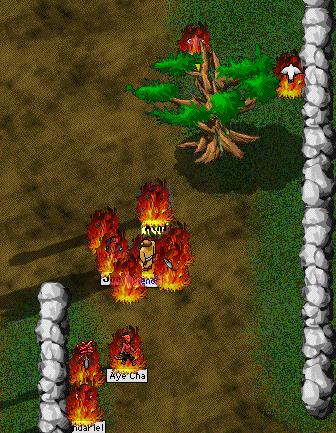 Spreading the fire a little 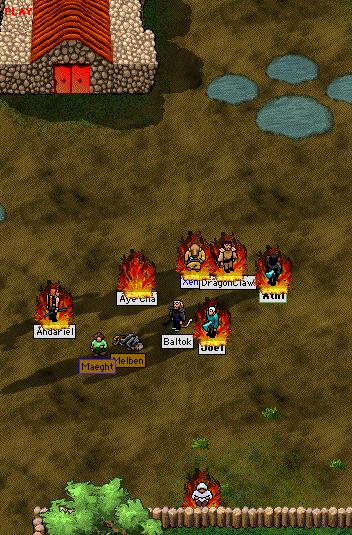 Everyone in town on fire

As I was saying, it wasn't long until the entire town was on fire when a few of us decided to see how an arachnoid would react to all of this. We ran to their cave as quickly as we could, unintentionally spreading the flames throughout the eastern forests as we went. I don't know what we thought we would achieve by any of this though. Despite resisting the flames for some time, the arachnoid eventually caught on fire too. We stayed a while and hunted some more. Once we grew tired and the flames had begun to die down, we decided it was time to head back to town. 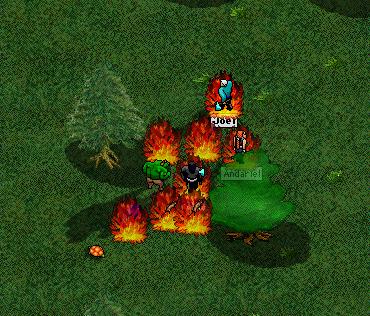 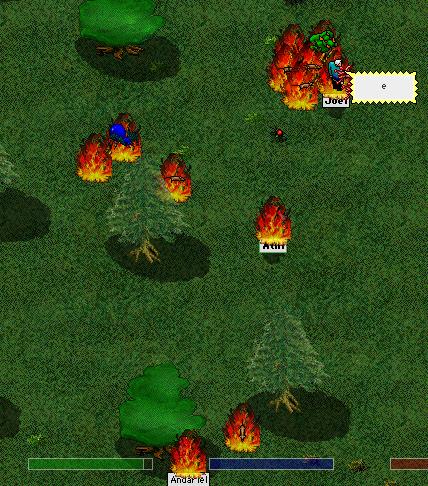 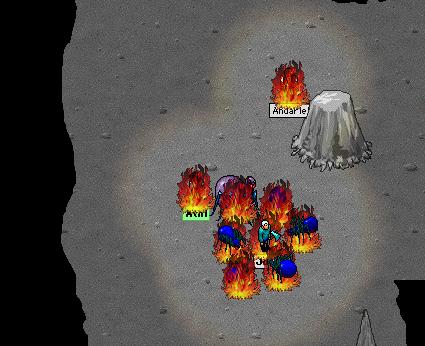 Spreading flames in the Noids Cave

Back in town, everyone was going about their business. The fire had stopped, and it was almost as if it never happened. Upon discussing the sudden and strange turn of events with others that missed the show, we quickly headed east in efforts to find any creatures still on fire. We managed to catch a glimpse of what looked like a flaming vermine, but this time we could smell it burning; suddenly out of nowhere, Fire Myrms showed up and began invading the Eastern Walls. 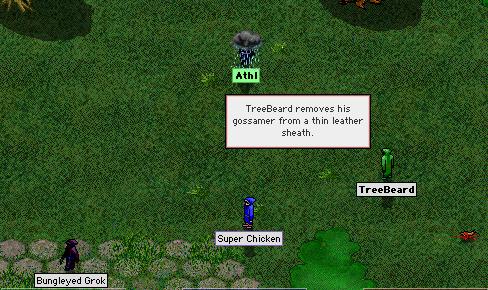 Searching for proof of fire with others 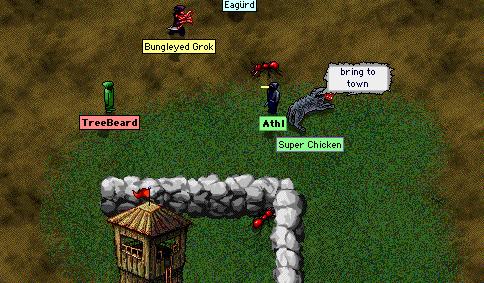 Many of the older and stronger exiles were able to hold them off for some time, though it quickly broke out into town as they started coming from all directions. The community banded together brilliantly, fighting off the massive hoards of seemingly endless myrms for several hours. Those that weren't strong enough to help fight chained the fallen by the masses to the many healers and mystics taking refuge with the dead and wounded in the library. It got very out of control, even mushrooms caught wind of what was happening and joined in the fight against us. Just as it was starting to look like a bit of a lost cause, and many were beginning to doubt their own survival, the town folk managed to seize control of the temple and slowly take back control starting with the western edges. 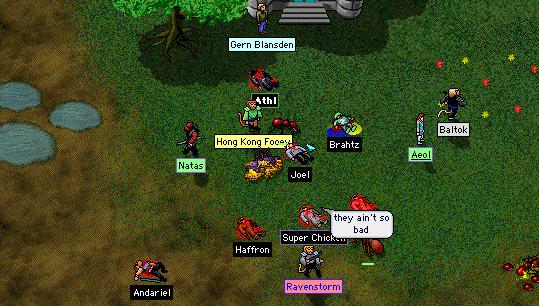 The fight in town 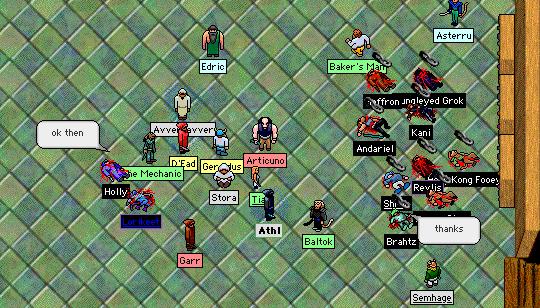 Fallen and wounded in Library 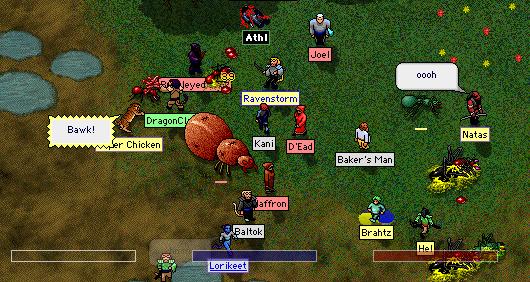 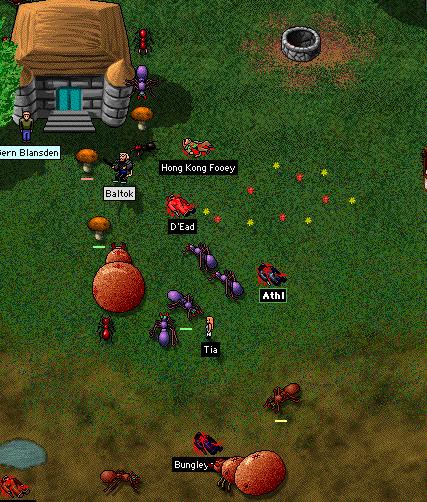 Every last Myrm was slaughtered, some of which are now big fat trophies by someone's fireplaceespecially those Matriarchs. The whole community came together as always and fought relentlessly, and without the efforts of many this could have turned out completely different. There are still some unsolved parts to the tale though: what unknown forces caused me to die by myrms down my pants; where did Stora get such foul language from; and why is the aura of flames still appearing around town? Perhaps this is only the beginning of something far more sinister. 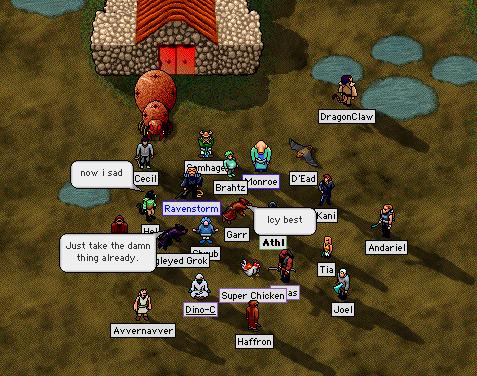 Big fatty myrm trying to get into the sketch 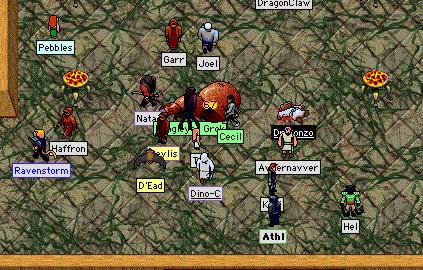 We quickly dispatched it 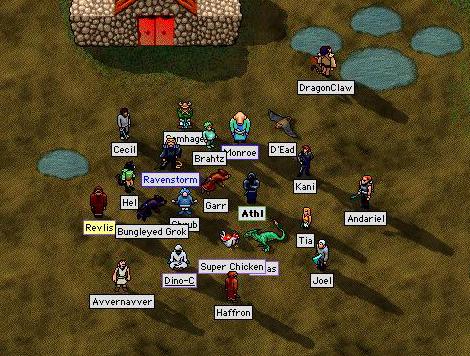 Final sketch of who was left at invasion's end

P.S.
Update: The fire can be "cured" by a Champion. You run into them, and they equip their Lava Cloak, and the flames disappear. Thought this might be valuable information, I didn't discover it.

Discussion on the Clan Lord Sentinel

Posted by Para at 09:41 PM
The Brotherhood

I have another small submission for you. This isn't the most exciting thing I've ever sent, but I thought it was strange and amusing enough to pass along!

I happened to walk through town centre just as three undead creatures appeared to be threatening Stora. On closer examination, though, I saw they were not attacking or hurting him, just standing around him. In fact, they were obviously in a formation of sorts. I did an info check on each of the three, and it turned out all three are members of a clan called The Brotherhood. Unfortunately, I don't know much about this clan or whether it requires one to dress as undine all the time!

After a while, though, the three costumed exiles took their leave one at a time. Each made a comment as he or she was leaving. One actually referred to the fact that this interlude had been a piece of performance art. I don't know whether I was the only person who wandered by and enjoyed it. Perhaps The Brotherhood will put on another performance one day soon!

Posted by Para at 07:24 AM
Relkin and Creed Engagement

Relkin and Creed are engaged!

Relkin made a rather spontaneous declaration of luv on an estuary hunt with just me and Kani along. I was so surprised that I only got a single, blurry sketch of the big moment, but Kani has a couple of better pictures. Hopefully he'll remember to send them!

No word on when we'll actually get married. Neither of us is in a huge hurry, and we want the wedding to be THE event of the season. Right now we're actually trying to figure out whether my marrying Relkin will also make me officially married to his various husbands. If there are any legal scholars in Puddleby who want to weigh in on that, we'd love to know.

Posted by Para at 07:21 AM
Journal of Eirian Caldwell

Check out the journal of Eirian Caldwell, an Impulsive Fen.

Chaos Storm #705 has swept the Lok'Groton island chain. Please post any changes you have observed and wish to share with others in the comments. If you don't want to read possible spoilers, please do not read any further!

* Mostly just internal enhancements this time. (Again).
* No crashes in 178 days and counting.
* Youll have to explore to discover the rest of this Chaos Storms changes.