ThoomCare Media Network
TMN: Still Thoomin' After All These Years
Sealing the Rift 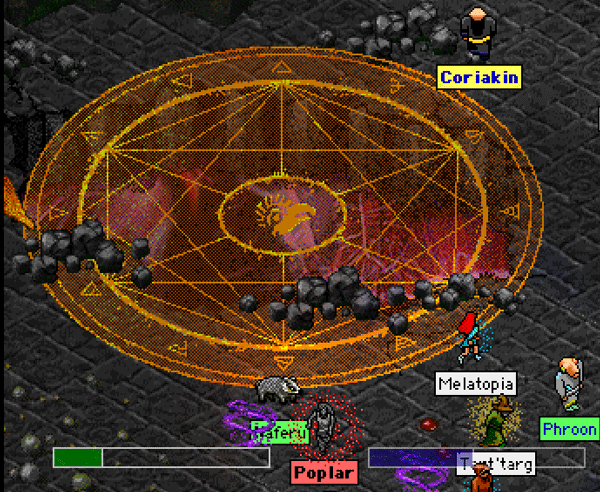 I bring good news! The assault on Shadowspring Citadel was a success, and the rift leading to the shadow plane has been sealed. Despite numerous setbacks, the Agronox Seal is in place. Working together with the aid of Tarttarg and Pelaegia, a large force of exiles was able to descend to the bottom of the Citadel, despite the forces arrayed against us. However, just as we began to approach the final chambers, the death of a particularly nasty shadow creature opened a portal to the shadow plane itself, blocking the staircase we needed to follow. 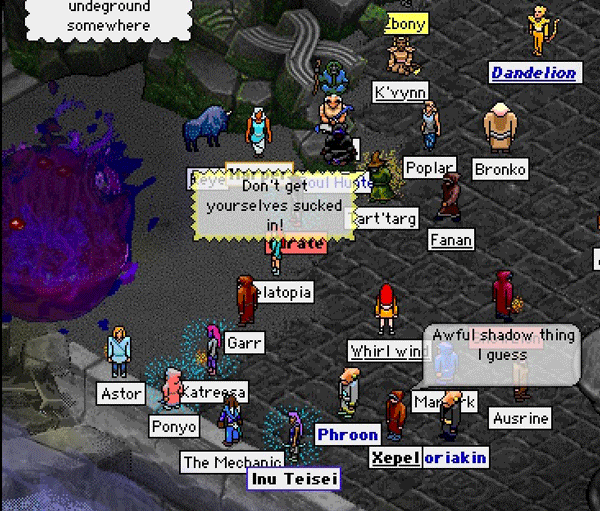 With no other options available to us, we bravely entered the portal to find ourselves in a peculiar, yet strangely compelling place. The shadowy growths that have invaded our island were pervasive there, as were even stranger sights. I was aghast and intrigued to see a plant that seemed to resemble my own harp! While there, I was overcome with a vision of a songa lament for something long-lost, but still missed. 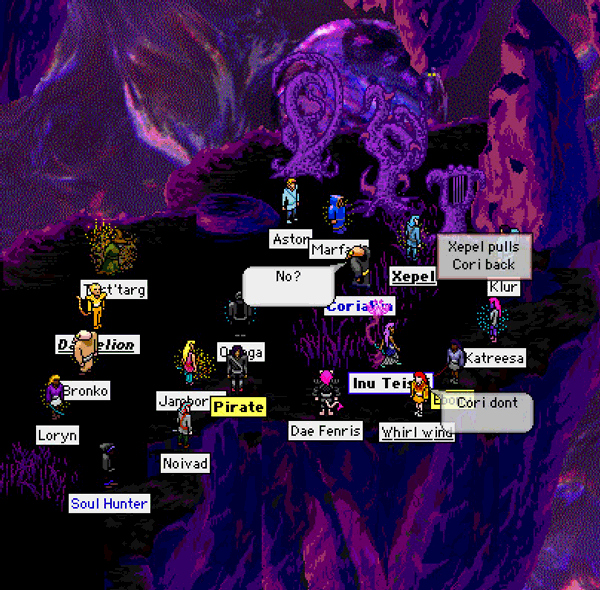 Sadly, there was little time to explore this place being there caused intrusive and unwelcome thoughts. Luckily, the lanterns held by Tarttarg and Pelaegia to dispel these thoughts. Despite the fearsome residents of the shadow plane, we were able to fight our way to a portal that seemed to lead to our destination, the lowest chamber in Shadowspring Citadel, the home of the rend. 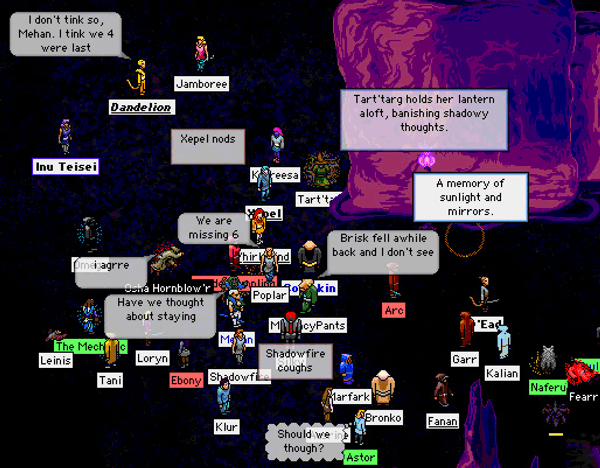 Unfortunately, too many shadow creatures had already followed that path before us, and the chamber proved to be a deathtrap. Despite everyones valiant efforts, it was not long before all were fallen. So close to our goal, it was out of our reach and all we could do was depart. 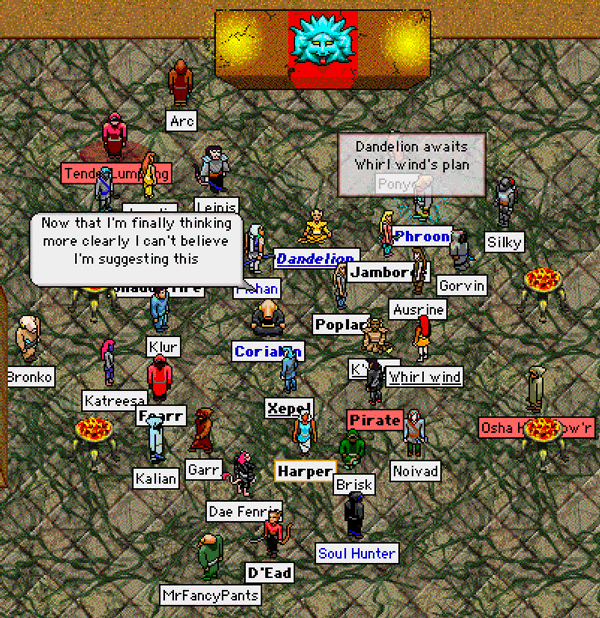 However, upon regrouping in town, we realized that all might not be lost. With so many departing from the shadows home, the borders between planes might be weakened enough to attempt to return to the shadow plane. Stinkfist had some individual success, but Im not quite sure how likely something involving higher states of consciousness, if you catch my drift. But then I realized that the song Id been almost possessed by earlier might be a connection between me and the shadowplane. An unwanted connection, but one that I might be able to use. After all, it drew me there once, perhaps it might do so again? 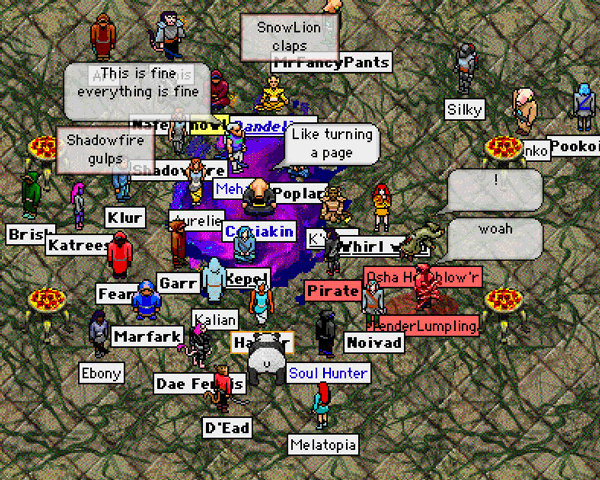 This was not an idea that came from nowhere. As much as I tried to deny it, I have had an experience in the past involving shadow music moving me. And not emotionally. Perhaps luring me might be more appropriate. Im not proud of that day, I would prefer not to speak of it. But the precedent was there, and amazingly my plan worked! A portal formed, beckoning back to the shadow plane. This time we did not have the support of Tarttarg and Pelaegia nor their lanterns, so we hastened to the familiar spot that promised passage back to our plane. This time we would be ready for what awaited us. 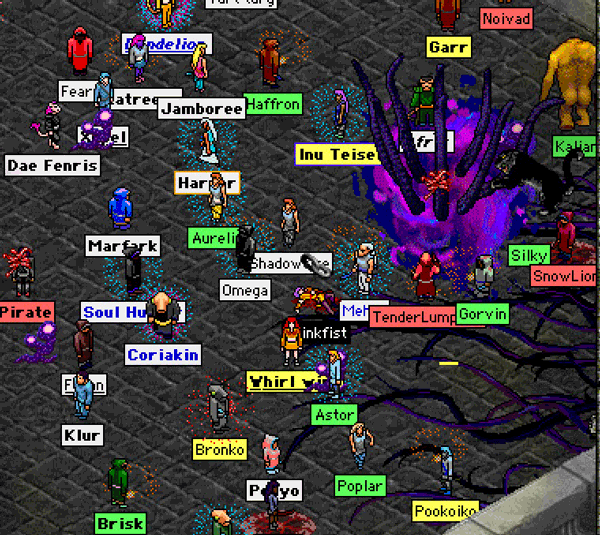 And indeed we were! After a frantic battle we were able to clear the area well enough to allow the ritual to begin. At this point I dont really remember what happened next, but Ive been told that the ritual began promisingly enough but the shadows retaliated. Wave after wave of shadow creatures appeared, attempting to slay the mystics performing the ritual but being beaten back by our valiant fighters and healers. At the same time well, the shadows possessed me. Without knowing what I was doing, I attacked Fanan with the blade of an assassin. One that had been used once before. 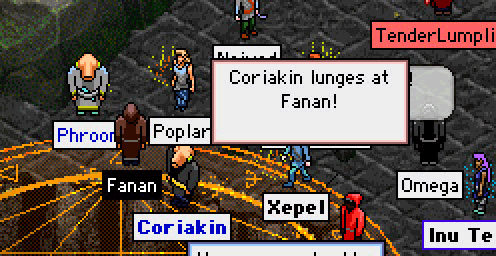 Im told I struggled wildly, but was restrained before I could irreparably disrupt the ritual. Nor could the shadow beasts cause lasting harm to the mystics. Once the ritual was complete, golden agronoxes appeared to help defeat the remaining shadows and I finally came to my senses. Im ashamed of what Ive done... I hope there is some way I can atone for my actions and seek forgiveness. 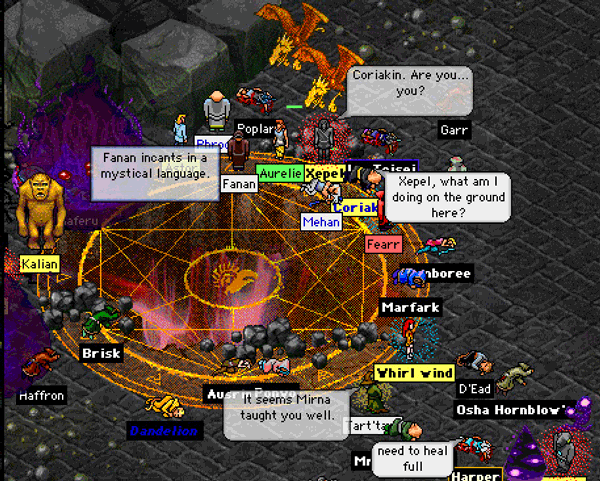 But in the end, the Agronox Seal is in place protecting Shadowspring Citadel. This was a victory for Puddleby, although not one without cost. Opening a portal to the shadowplane allowed shadow creatures into town, ones that needed to be dealt with when we finally returned. That portal is no longer open (thankfully), and we can hope that its appearance was a one-time-only event made possible by special circumstances, but its entirely possible that the shadows will be able to reach us much closer to home than the citadel, next time. We must be vigilant. 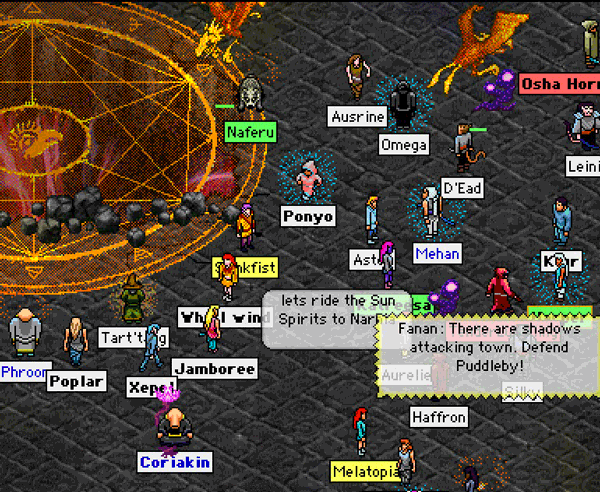 P.S. The next bard concert is happening next Saturday at 11AM Pacific Time! Come hear the entries in the latest composing contest; the winner will receive a museum token!

Posted by Para at 01:50 PM
Lore Tour of All Lore Tours 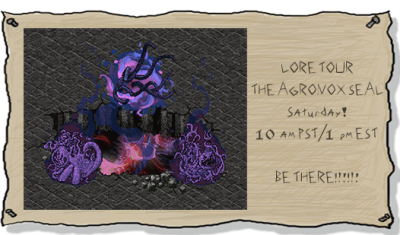 We will be traveling to the depths of Shadowspring Citadel to conduct the Agronox Seal Ritual that was taught to us by an Ancient Witch who went by just too many names to list.

Hopefully sealing the crack/rend in reality there will help the Shadow problem popping up Fane and ABC. At least not make any worse.

We need as many exiles as possible in order for this to succeed, so be there!
Mystics, Healers, and Fighters of All Flavors! Fate of our plane of existence depends on it! BE THERE 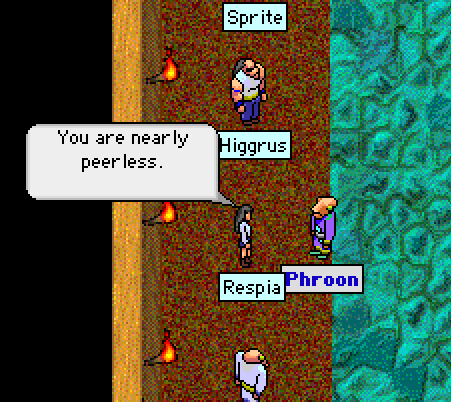 Chaos Storm #1258 has swept the Lok'Groton island chain. Please post any changes you have observed and wish to share with others in the comments.