ThoomCare Media Network
TMN: Thoom News You Can Use
Gurgi Gets Squashed

Gurgi was a victim of a simultaneous rockslide and pebble barrage the other day in the Foothills so a call for Horus rang out. What followed was one of the most impressive gatherings of Horus in the history of Puddleby. There was believed to be well over 10,000 Horus present! Amazingly, it still wasn't enough, as Gurgi remained perilously near death! Sadly, Gurgi eventually had to depart and the army of healers dispersed.

Posted by Para at 09:48 PM
Phineas's Mega-Amazing Book One Adventure

Phineas and PAG will be leading an adventure to Path Finding Book One on Sunday, August 12th, 2007 beginning at 11:30am PDT. This trip is open to everyone. We're gonna have so much fun on this adventure that we'll require surgeons to remove the smiles from our faces!

More information on this adventure may be read on the Clan Lord Sentinel.

In his most recent journal entry, Azriel reports on trips to Sarra, Metzetli Island, and the Tepui.

A message from Joe at Delta Tao:

We added a free month to all expired accounts, so tell your friends to stop back in and say hi.

Pathfinding: is it worth the effort? Mephisto has opened a discussion on the Clan Lord Sentinel.

Kerrah made the following announcement on the Clan Lord Sentinel:

I will be teaching a class on skinning fun and tactics on Saturday, July 28, at 12 pm PDT. I will probably resurrect my lecture from the one I taught last year. Participants will meet in the brewery at Noon and move on to the University lobby. Lecture will be followed by an in-field demonstration in the Valley. A pathfinding TA would be very helpful, but not vital in an absolute pinch.

Requirements: None. However, if you are a fighter that doesn't have the Atkus to hit Valley creatures, please understand that we'll only be able to hold the creatures for tags for a limited time before they'll need to be killed, to keep the hunt moving at a brisk pace.

Fees: None, although donations would be appreciated (by no means necessary). 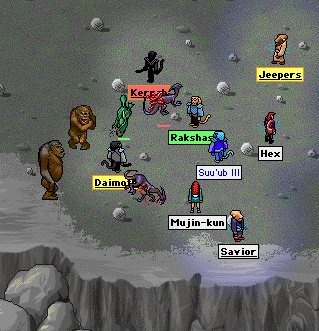 Recently a group of exiles lead by Mephisto made the dangerous backdoor entry to Tepui, with assistance from Xel (not pictured). We explored the region looking for yet unfound paths, though were unsuccessful in that regard. The hunt was a great success, however, and much fun was had by all. Once thought to be a dangerous and thus ignored route to Tepui, our increased strength seems to be making this shorter entrance much more viable. 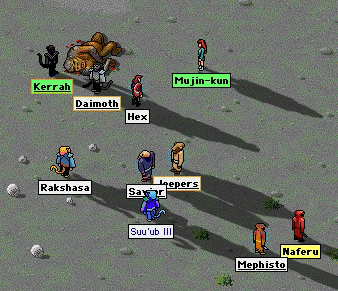 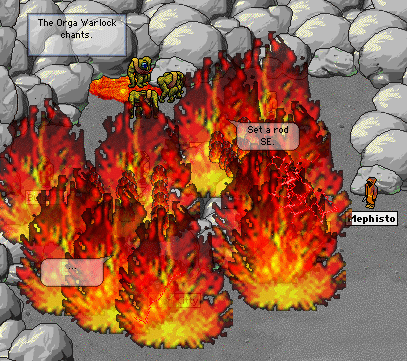 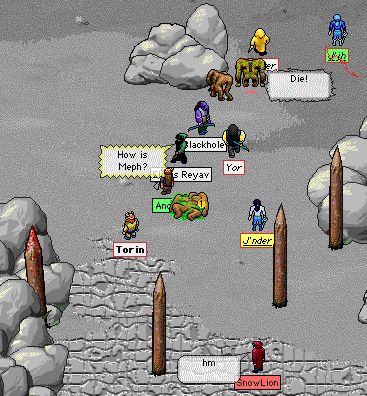 Torin reports on OWE News on the exploration of a new Orga Village path.

In his most recent journal entry, Mouser reports on his studies of the Darshak Liche.

Illora Mone sent TMN some pictures of a recent fireworks exhibition in Town Center. An exile named Sethy seems to have discovered a wand that he proceeded to use to produce the various effects.

Posted by Para at 01:14 PM
Planar Warming: Fact or Fraud?

So, what happened? Did the incursions stop? Did exiles stop them? Should we be doing something?

Posted by Para at 05:35 AM
Deathtrap Noids and Tepui Temple 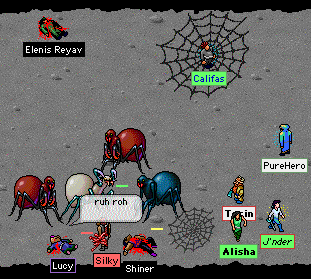 Posted by Para at 09:50 AM
Apprentice Mystic Eil'daen Passed Away 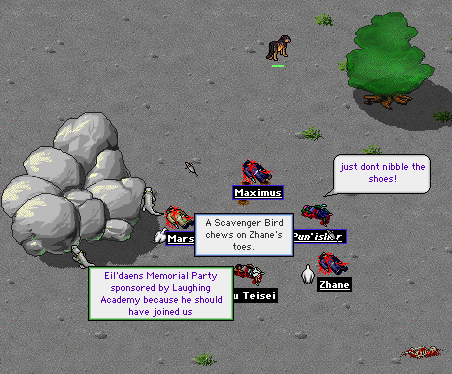 Zhane reports the news of the death of Eil'daen in Eil'daen's journal.

More information is available on the Clan Lord Sentinel.

Posted by Para at 09:41 AM
Nyssa Remembered; Sativa Denied 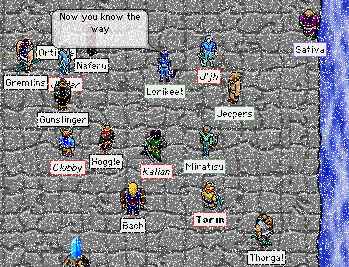 Posted by Para at 08:48 AM
Animated Chicken, Largo, Daimoth

Chaos Storm #502 has swept the Lok'Groton island chain. Please post any changes you have observed and wish to share with others in the comments. If you don't want to read possible spoilers, please do not read the comments.

Posted by Para at 11:00 PM
FMOCR and a Visit to the Ethereal Plane 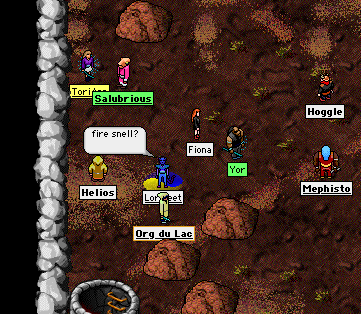 Hello again Para! Just wanted to keep you updated with the excitement I've had recently traveling throughout the lands.

First, during the most recent full moon event, I was lucky enough to join Asenath and a large crew through the Orga Camps to defeat an Orga Magician so that Miss Asenath could use his stone for some fangled Full Mystic tasks. I didn't get a chance to see the Magician, however, due to Yor's deadly assassination skills.

Less than a zodiac later, after careful discussion with my superiors, I organized a group to travel through the Ethereal Plane to visit Mr. Lugubrion's Tower. I'm learning more of the plane each visit I make, thanks to many knowledgeable, strong and kind exiles such as Yor and Lorikeet. Once again, a big thank you to everyone who assisted in our little expedition. Hopefully, our exit will be a bit more organized next time, though. <: 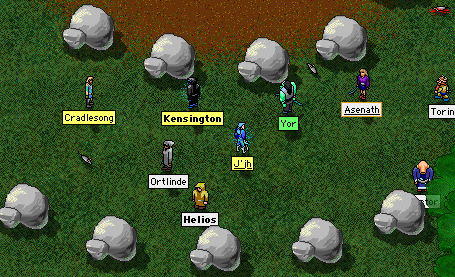 * mTooth is a very helpful application (OS X only).

* If you have any question, ask a bard (either in town or via PM)!

Posted by Para at 11:07 PM
Expired Accounts Activated for a Month

A message from Joe at Delta Tao:

We added a free month to all expired accounts, so tell your friends to stop back in and say hi.

We had a relatively a small group, which lacked fighters (for a change!). As a result, we weren't overly confident and it took 2 hours of head banging to get past the Orga Stronghold. We then made pretty quick progress through the other snells and luckily we had about five latecomers turn up to help out (so if you ever think you've missed the trip, just log on you might be able to catch up).

After taking the snell that Katpus resided in, Yor showed the fragment to Katpus, but she didn't react. Slightly disappointed by this after such a hard-won item did not achieve the desired result, we were resigned to having to find more fragments. We decided to look in 13 and see how we could get in deeper.

As it turned out, it was very hot and we decided instead to pile into the PF and map it. Luckily, as we piled through most got in. Some went through a PF that led to Dredwood, some didn't get through and got chained in 13, some backed out into 12. Myself and a few others cleared the small PF area of critters which was surprisingly easy (not much there) and then got everyone else from 12 who was fallen and formed up a group again. We moved back through the PF in 13 and then tried the 3 or 4 PF paths that we saw.

One we didn't take as it went to Dredwood, two other paths we could barely see, and one path with much staring no-one could open until Meph tried and opened it. The shout came up that Trillbane was there, and we all piled in.

Multiple people trained and then we all headed out and suicided in 13 trying to get some more parchments; it was just hard to rod with half the team dead.

Posted by Para at 07:16 AM
Trillbane Found 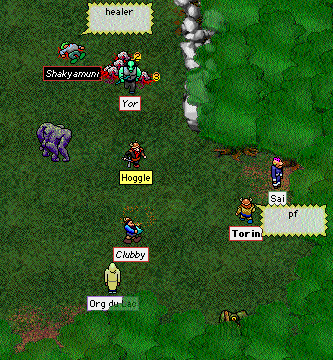 Torin reports on OWE News that Trillbane was found during today's EAT/PAG trip to the Orga Stronghold.

Posted by Para at 11:58 PM
Catching Up With OWE News

Hunter and Torin report on OWE News the following stories:

Posted by Para at 11:54 PM
Tenebrion on Crack

Azriel has posted his report on Chaos Storm #496. Featured in this report:

1) A crack in the Annulus and the fallen Tenebron therein
(Read Yor's report on the Clan Lord Sentinel for more information)
See also: OWE News Report: Ethereal Mystery
2) The fourth joint PAG/EAT expedition to the Orga Stronghold
See also: Shakyamuni's report
3) A trip to Sarra by PTF and friends and the discovery of a curious pool
4) The rainforest on Metzetli Island
5) Uli hunting and the wrath of angry orgas 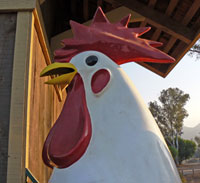 Once again we see the danger presented by the light-emitting evil beacons of the sea. Find out more on the Clan Lord Sentinel.

Org du Lac has updated his Bestiary, a valuable source of information on the various creatures to be found in the lands.

Read about and comment upon it here at the Clan Lord Sentinel: