Puddleby was recently under siege by various Orga and Death Vermine.

East Field was completely overtaken. Puddleby was for a period of time overrun by the Orga.

An Orga Ire rampaged through town and could not be defeated by exile forces.

Q: Does one have to be a Fen to be nominated or elected as Fen President?

Q: Does one have to be a Fen to vote for Fen President?

A: No, definitely not. All exiles should participate!

Q: Who selects the nominees for Fen President?

A: Stop asking so many questions and study up on the candidates. Your vote matters!

Q: Why isn't Relkin a candidate?

A: Every Fen Presidential election is packed with various conspiracies. Welcome to the first one.

Posted by Para at 07:21 AM
Fen Presidential Election Coming Up

What's that smell in the air? Sniff, sniff, boy, it stinks. It could only be one thing: Puddleby politics! You know what that means: it's time for Fen Presidential Elections.

Balloting for the office of Fen President will begin soon.

453: Who has your support for the office of Fen President?
Daimoth
Kerrah
Odesseus
Phineas, a.k.a. Fen-eas
None of the above 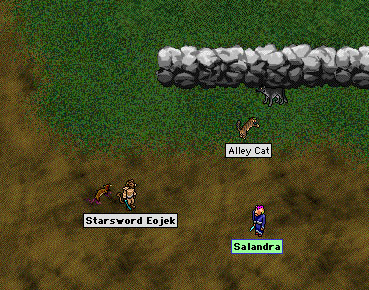 I'm writing you to report of a new ally in the fight against evil! Recently, "Salad" the Alley Cat has appeared in town and has taken to clearing Puddleby of all kinds of monsters. I drew this sketch of Salad earlier. So far I've seen Salad killing everything from rats to Darshak!

Posted by Para at 08:48 AM
Sentinel Makes a Sound 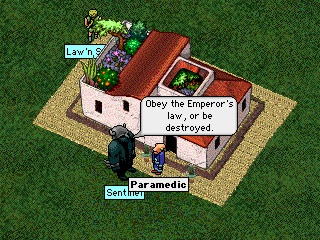 The Sentinel now makes a strange and ominous sound.

New types of powerful myrms have appeared in the hive and are venturing into Puddleby.

Posted by Para at 10:55 PM
Arianrhod: Myrms, Darshak, a Chicken, and More

Arianrhod has updated her journal with new entries:

Myrms
My Journey to Puddleby
Super Chicken, Darshak and Dying (my hair)
Dear Diary . . . It's the Anniversary

Eden reports in her journal on a controversy in town about the inability to dye the female Thoom crest (also known as a rill).

Posted by Para at 03:40 AM
Lugubrion Exploration Group Trip 3 & 4 Report 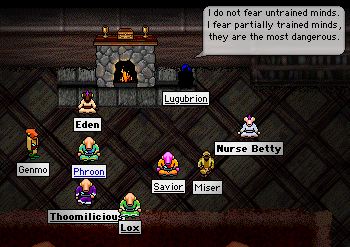 Dongle asked me to take a couple pictures and forward them to you, so here they are. He strutted into town saying he found some ore, then proceeded to drop several Earthstones. The next day he left even more on the ground in town center. Apparently there's a rather large hole in his sack.

In other news, Elindir' has joined OWE. Read more about it on OWE News.

Recently, a small Metz group hunting inside the Gloamings cave found a new path that requires full Trillbane (or close to it) to open. At the end of the river, there is a small crevice where this path lays.

"Talin squeezes between the stalagmites."

Immediately after entering the path, we found ourselves outside of the Metz island. This path is an easy exit out of the Gloamings cave! 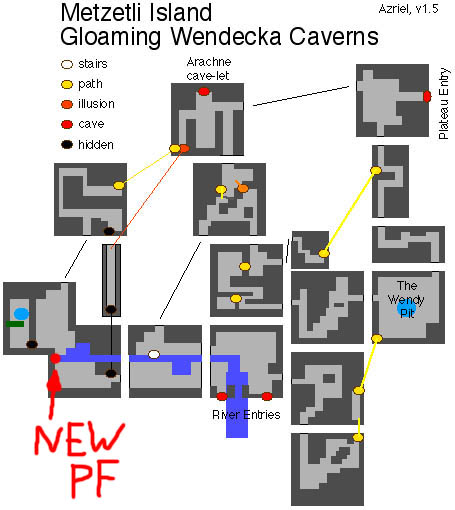 Chaos Storm #530 has swept the Lok'Groton island chain. Please post any changes you have observed and wish to share with others in the comments. If you don't want to read possible spoilers, please do not read the comments.

Posted by Para at 09:08 PM
Thooms Needed for Exploration of Lugubrion's Keep

The all-Thoom Lugubrion Exploration Group is recruiting for a new mission. Read about the details in Eden's journal.

Posted by Para at 06:09 AM
Gloria's New Journal

Gloria has started a new journal. Her first entry is a report on an expedition with Borkiron, Brahtz, and Super Chicken.

Posted by Para at 08:45 AM
Proximus Ledger for Nohurt

I am quite pleased to report that today, Terrdi, Day 48 of Summer, 569I, Nohurt have obtained my Proximus Ledger ;-D

Xepel reports on the Clan Lord Sentinel that Wangah Rah has been repromoted to full mystic status.

Posted by Para at 09:44 PM
Darshak Activity on TI Continues

Azriel has posted his report on Chaos Storm 527: Continued Darshak activity on Tenebrion's Island, including the construction of new outposts and docks, the presence of supply and troop ships, and a now-abandoned tunnel; the large hole in the area east of Flander's Field that leads to the Annulus in the Ethereal Plane; and a PTF trip to the Thaumaturge's Lair under Ash Island.

Posted by Para at 12:26 AM
Tenebrion Island Chasm 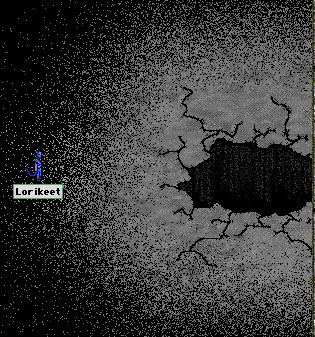 I was with a group that fought off the Darshak from the south entry of TI to the west exit. Then we decided to go to the keep. I was stunned to see what had happened to the area east of the Poppy Field in the short time since I had been there previously. The hole the Darshak apparently made when their kyuem efforts went awry has become very sinister-looking, as has the surrounding area. It is now very dark and gloomy. 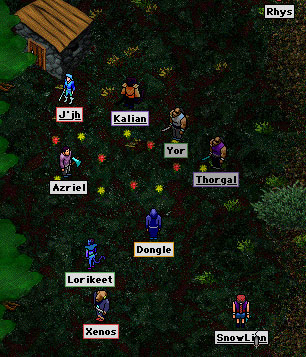 Measle reports on the Clan Lord Sentinel that Malkor has been repromoted to full mystic status.

What happened to Skirwan the Thoom? When last seen, she was working to fill in the chasm in East Field. Did she fall in? Was she pushed? Find out more at the Clan Lord Sentinel.

Could her disappearance be related to the recent incident involving Skirwan and her Zo namesake tossing Wangah Rah down the very same chasm?

Posted by Para at 12:10 AM
Darshak Cipher Discovered in Town

DeathLord reports on the Clan Lord Sentinel that a Darshak Carrier Parrot was killed in Town Center. It dropped a scroll with a coded message. 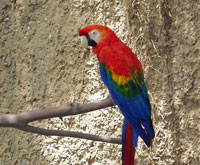 TMN has learned that the following mystics have been demoted to journeyman mystics:

More news as this story develops.

Just wanted to let you know some exciting news about Laughing Academy:

1. A new edition of the LA Inquirer has been posted to:

2. Laughing Academy has a new regularly scheduled hunt on the second Sunday of each month at 4PM EST, 1PM PST, 9PM UK. The Calendar has been updated.

3. We have been busy inducting many new members into our clan. Punny has a backlog of inductees to initiate.

Posted by Para at 09:10 AM
Clearing on the Cloud

Looks like the Cloud has changed a bit, as the smog at the opening has finally cleared.

Guess the no-smoking ban in the mystic control room turned out for the best.

P.S. I wonder if it was inspired by this image from "If Thooms Had Cameras"?

Posted by Para at 09:04 AM
Darshak Spies

I have been following the news through your organization, and it is a fine source of reporting for the community. I just wanted to mention that some Darshak spies were found in town recently. At first glance, they seemed like ordinary citizens of Puddleby, but they had a revealing tendency to slash at people with a knife that gave them away as spies. I wonder if the spies might try to hide within our community, masquerading as regular citizens, and then use their positions to bring ruin to Puddleby. The spies seem characterized by their green clothing.

Posted by Para at 08:44 AM
Recent Reports from Azriel

Azriel has continued to produce his excellent regular chaos storm reports during the time I've been away. Here are his most recent journal entries:

Chaos Storm 517: The Feast of Tsrrin and this year's unusual costumes and costume shops; Joel Crotchet; hunting on Kizmia's Island; exploring Metzetli Island; the final Ethereal Incursion at the Greymyr Village; Azriel's training progress; a picnic with a J'jh-kebab.

Chaos Storm 520: Bailey Barno's Carnival; the last Herald's Rune in the East Field; hunting Kizmia's Island with OWE; new access to a path to the entrance of the Foothills.

Chaos Storm 523: The Darshak invasion of Tenebrion's Island; the Necromancer problem; return of the Revour; return of the potato; Natas the Ranger; a PAG trip to the Second Pathfinding Book; the gaping hole in East Field being filled by Skirwan (no, not that Skirwan, the other Skirwan).

Chaos Storm #527 has swept the Lok'Groton island chain. Please post any changes you have observed and wish to share with others in the comments. If you don't want to read possible spoilers, please do not read the comments.

The all-Thoom Lugubrion Exploration Group has returned from its first mission. Read about the details in Eden's journal.

Eden also reports in her journal on a large Darshak presence on Kismia's Island.

Posted by Para at 08:29 AM
Santa Chicken Comes to Town

Eden reports in her journal on the appearance of Santa Chicken in town for Bawkmas. She also tells the story of How the Chicken Stole Bawkmas.

In another recent report, Eden reports on her trainers, Natas and Mujin-kun.

You can read more about the exploration of Lugubrion's Keep and the formation of the Lugubrion Exploration Group (LEG) on the Clan Lord Sentinel. 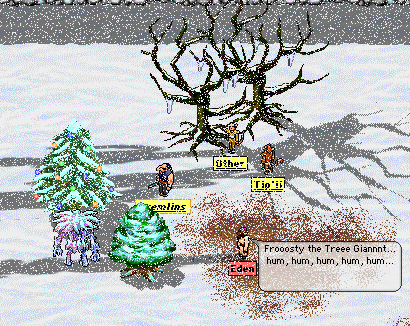 Eden reports in her journal on the Bawkmas holiday. 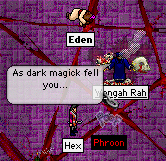 Eden reports in her journal on the recent and highly unusual raising of ThoomCare member and SNN reporter Phroon the Thoom.

Posted by Para at 11:10 PM
Jade Noids, Too Many Darshak 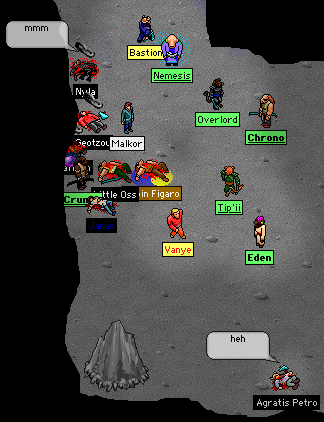 Eden reports in her journal on a Jade Noids rescue and the problem of excess Darshak on the shores on Tenebrion's Isle. 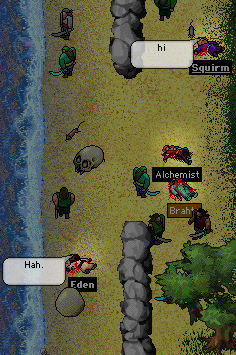 She also reports on a recent hunt to Metz and elsewhere, as well as her upcoming goals.