ThoomCare Media Network
TMN: Thoom News You Can Use
Eldon: The Producer

Measle reports in his most recent journal entry on the appearance of Eldon, Puddleby's behind-the-scenes theatrical producer, and the new affiliation status for the Puddleby Players.

Eden has updated her journal with the following entries: 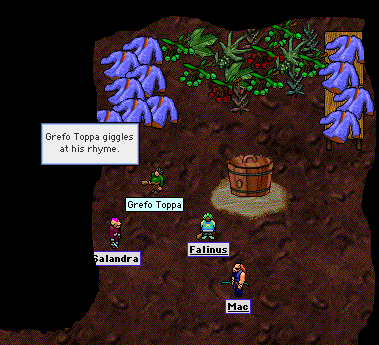 A small group of exiles (not all pictured) was recently able to visit Grefo in his workshop where he is busy working away on his sought after forest green shirts. We talked with him a while. He was not happy about his recent trip to the courthouse, but he was pleased that he was able to visit Puddleby again. He appears to be doing well and seems to be in high spirits!

Posted by Para at 11:14 AM
Retaking Puddleby 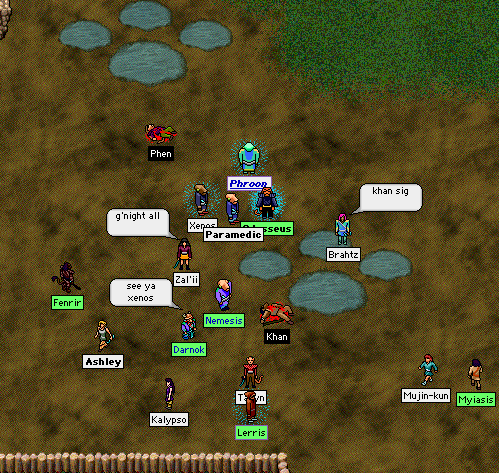 Town Center is now mostly free of invaders, but Darshak war parties continue to venture into the center of town and still control parts of South and East Puddleby. Exiles are advised to show caution until Puddleby is completely secured.

Posted by Para at 11:38 PM
Resisting the Darshak 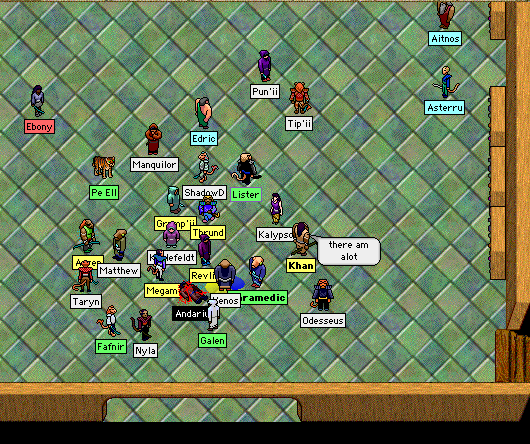 Exiles continue to resist the Darshak takeover of Puddleby. In the image above, healers work in the library as fighters launch attacks on the Darshak invasion force.

Odesseus sent this image of a pileup outside the library.

Posted by Para at 09:36 PM
Puddleby Falls to Darshak

Yikes has sent word to TMN of a massive Darshak invasion currently underway. Puddleby has fallen to the Darshak.

ThoomCare member Phroon has passed the sixth circle healing test. You can read more about it and see a visionstone in his most recent journal entry.

Posted by Para at 07:32 PM
PAG & EAT's Last Trip to the Orga Stronghold

Fundin has announced the end of PAG & EAT's regular trips to the Orga Stronghold.

Chaos Storm #542 has swept the Lok'Groton island chain. Please post any changes you have observed and wish to share with others in the comments. If you don't want to read possible spoilers, please do not read the comments. 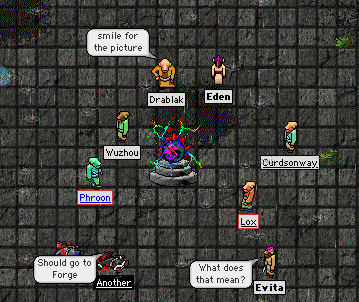 Eden reports on the latest efforts of the Lugubrion Exploration Group in her most recent journal entry. Shortly after Phroon planted this kyuem, it unexpectedly stopped working.

Posted by Para at 09:37 AM
Successful Book One Trip

I am pleased to report that today's Book One trip organized by Starsword Eojek went well. Thanks to a large, multitalented group of exiles, we were able to reach the book without too much carnage, and a number of exiles started studying Giayl's Guide to Hidden Ways. In fact, several exiles then waited long enough to get through one chapter and start a second!

So many exiles started this training that I am not able to list them all, but I did make a sketch of a few of the successful candidates.

On our way back to town, we also swung by Book Three for one exile who needed advanced training. All in all I believe it was quite a successful trip.

Rising Claw is completing their long-awaited statue to grace their space in the Puddleby Museum.

Years in the making, this heroic piece will depict an epic moment in Rising Claw's history. It features two prominent figures that are important in the creation and sustaining of the honorable clan. You'll have to wait for the big unveiling to see the actual piece!

Final touches are being done to the statue, which is expected to be unveiled in the museum soon. After its installation, Rising Claw plans to host festivities and games to celebrate this momentous event.

The Rising Claw scrolls (http://www.risingclaw.com) are presently being repaired after they were damaged in a move to a new storage area. The repairs will freshen the old scrolls, plus there will be additional information about the Fen'neko race, drawings by Odesseus, a photo gallery of historic sketches, and the history of the clan itself.

Reports on the Clan Lord Sentinel indicate that Bartok, the Orga warlord, has been killed.

The first images from the battle are now trickling in to TMN.

It remains unknown at present if there was a chest or catapult piece involved.

Posted by Para at 04:18 PM
Invasions of Zynx, Largos, Pun'isher 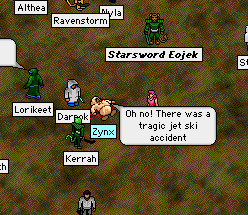 Pun'isher sent to TMN these pictures of the recent invasions of Zynx, Largos, and Pun'isher. 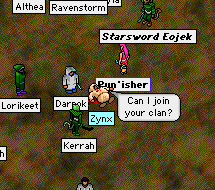 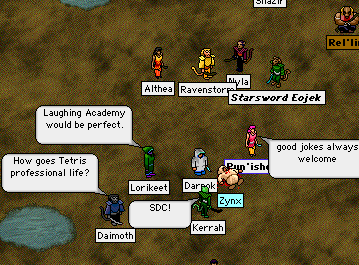 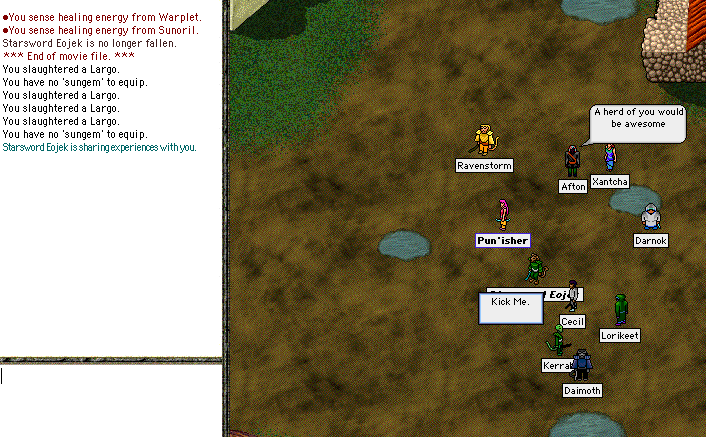 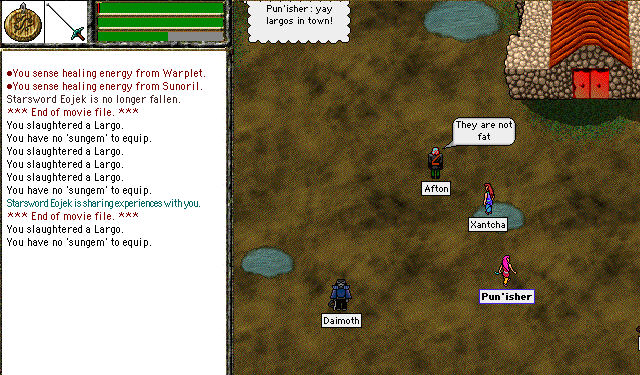 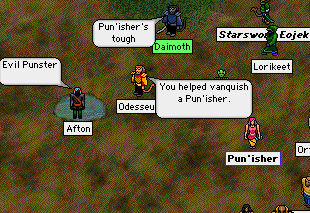 Posted by Para at 10:14 PM
Construction at Castle Site, a Book, and Skirts

With the recent controversy over the castle, I thought I'd send this recent sketch of when Geotzou, Kayander Mere, and I happened to visit the castle site just before construction started (this was literally just several hours before the chaos storm came that brought the construction workers). So this is a record of one of the last views of the farmhouse/fort before the "construction" work began that demolished it.

This house was itself built after years of donations by exiles, so why has it been demolished now? And what was all the point of all the donations that went to building it? Maybe someone should investigate.

As far as other unusual happenings, there were two that caught my attention. First, when I went to look around Joel Crotchet's candle shop in south town one day, he wasn't selling only candles, but also the black book with the cover of a full and crescent moon (the same kind as on the back table near his cat).

From the cover images, I thought it might be a healer book. But when I went to admire it, I was horrified to find it was a counterfeit book. This concerned me because a candle and a book are 2 of the 3 items to be found in the quest to become a healer. Does Joel sell unauthorized bells too? I wouldn't want to have counterfeit healers around. But then, if they only have counterfeit moonstones, maybe it doesn't matter after all.

Second is from quite a few weeks ago when I went to the tailor shop to try out some dyeing/bleaching combos. There were three fashion designers (I guess) giving out trial garments. Maxie, a Thoom, handed out a navy blue skirt; and Minnie, a Fen, gave out a maroon one. More interesting was a Zo named MacSporran who had forest green trial kilts. However, once I had possession of them, they all turned out to be identical skirts (except for color). I tried them all on, but bizarrely, they all made me look fat. It's not my imagination, is it (compare with the mannequin made up to look like me up north)?

Unfortunately, I wasn't allowed to take any of them out of the shop, as they were only trial skirts/kilts (same as the trial shoes or trial hair dyes or trial musical instruments in their respective areas). Skirts aren't my style anyway (even if I didn't look so bloated in them), but others might be interested. However, when I went back not long after, the fashion designers weren't around any more. No idea about their whereabouts or if they'll come back.

Well, those are some odd incidents I encountered recently. Seeya, bye for now.

There's a rift in town that leads to a unusual environment known as NetHack.

Posted by Para at 08:38 AM
Hints About the Next Puddleby Players Production

Miug gave TMN some hints about the next Puddleby Players Production:

"It also has a chicken."

Posted by Para at 08:34 AM
Bard Audition Time

It's that time of year again! Time for a Bard Audition!

We have one person signed up so far, but are willing to audition others if anyone is interested. Audition information can be found on the Clan Lord Sentinel.

So come one, come all (especially Bards for the judging committee!) to our Bard Audition, Saturday April 5th, 12PM Pacific/3PM Eastern/9PM German.

As always, there will likely be food and drink (but I'm not bringing it, so I need you to bring some) as well as plenty more music afterwards.

Posted by Para at 05:42 AM
Call for Members of Winds of Dawn

Therian and Rios Dearg would like to put out a call to any remaining members of the WoD. There has been a proposal posted on the members-only section of the Clan Forum, and we would be grateful if clan members could read and respond with their thoughts.

We are not sure who still reads the forum, which is why I thought it would be a good idea to have this put up on TMN to try and reach as many clanmates as possible.

Posted by Para at 05:32 AM
Yor's Gambling Problem 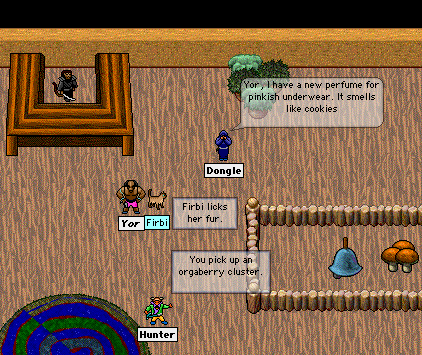 Hunter reports in OWE News on the latest development with Yor's gambling problem.