Chaos Storm #612 has swept the Lok'Groton island chain. Please post any changes you have observed and wish to share with others in the comments. If you don't want to read possible spoilers, please do not read any further!

8/19/2009 v612
Some people think only intellect counts: knowing how to solve problems, knowing how to get by, knowing how to identify an advantage and seize it. But the functions of intellect are insufficient without courage, love, friendship, compassion and empathy.  Author Unknown

* No crashes in 194 days and counting. The record is 723 days.
* Mystics suck less.
* Youll have to explore to discover the rest of this Chaos Storms changes. Enjoy! 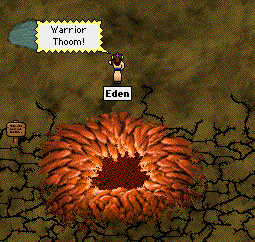 I have returned and defeated the 6th circle fighter test. 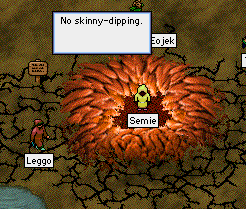 TRAP has an important announcement to make. As you may know, the normal flow of Town Center was recently interrupted by an Abyssal invasion. While the Hunters have gone back to whence they came, an obvious result of this invasion is the gigantic lava pit now marring TC. TRAP representatives* have studied the pit and decided on a classification: "Definitely a Trap" with an intensity of 8.

(Note: The Ackkbar-Epic Scale was invented in order to calculate the danger of traps. The Ackkbar half of the scale runs the gambit from, "Could be a Trap" to "Trap of all Traps". There is no "Not a Trap" - that'd be silly. The Epic scale defines just how stupid it is to go near said trap (intensity runs from 1-11. an intensity of 1 = "pretty stupid". there is no "not stupid", 'cuz that'd be silly).)

Some helpful townsperson has posted a sign warning exiles off of skinny-dipping. Nevertheless, there is still a good likelyhood of being struck blind upon approaching the pool. This accounts for the majority of the danger rating. Other dangers involve teleportation to the second circle of the Abyss, having your head bashed in by a giant skeleton, plunging into Puddleby Underground, roasting alive in lava, blah blah blah etc. etc.

So Puddleby, TRAP says unto you . . . be careful! And remember: traps are not your friend! (but TRAP is)

*me, myself and I

Posted by Para at 07:18 PM
Fissure to the Abyss Opens in Town Center 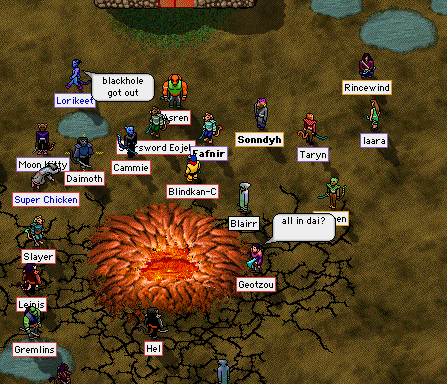 I looked up from my books to see a huge crowd of people in the library, many fallen. They reported that town was full of abyssal hunters. When they finally made it safe enough for me to peek outside, I saw what is pictured above.

Everyone went in except for me and Rincewind, so when the Abyssals checked back in, only one was needed to come in. I saved Rincewind by falling between him and the Hunter. Kisa appeared from the temple, and the main force arrived immediately. She chained me, found another fallen while running around, raised us both in the Fairgrounds and left us.

We took the tour to see if town was safe. Eventually I did cross into the Abyss myself, found that I can survive about one second in lava. Abyss 2 is chilly, and crowded. We won though!

Natas was having a house party with Melben playing the role of most excellent hostess. A bunch of us were enjoying some slick 'noid action when things got a little wierd. First there was this standoff at the top of the cave. Then once one of us took a swing all heck broke out. In the following battle, one with a lot of retreat & return, a couple new 'noids joined the dust-up.

That they do, Gremlins. Not a lot each hit, but they do seem to get a lot of hits. Oh and who's its buddy? That looks like it means business. 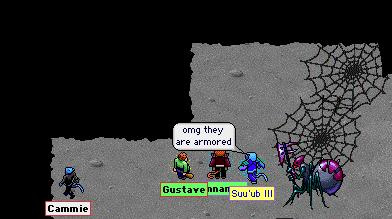 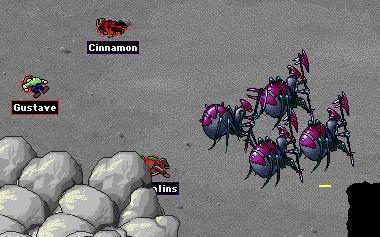 And organized. They took up position between the fallen and the exit, or maybe the fallen and the living. Point is, they have a plan. They're like the guards outside The Emperor's Palace, you could walk right up to them and sneer in their faces. Take a swing and they burst into action.

Not sure what this all means. Are they being engineered by some sinister force? Have they always existed and are just visiting from out-of-town? What's with all the hissing and what does The Epnguin have to do with it?

Posted by Para at 09:09 AM
DTN Sinkhole and Executioner Noids

Greetings Para, I bring you the following epic story...

Hearing reports from Melben and Salazar of suspicious noid activity outside DTN, a few brave exiles (me, another fighter, and two mystics - you can prolly guess how that turned out XD) went to check it out. We encountered a routine sampling of Noid invaders, until we started hearing a strange hissing coming from the DTN cavern. Of course this intrepid reporter ran in to die, I mean investigate. 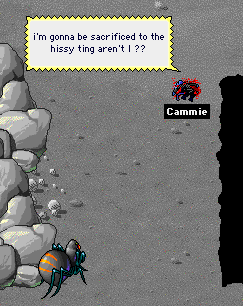 But that was just the beginning! There were Pitch noids, Black Widows and then a series of earthquakes, culminating in a massive one that pulled trees from the ground and seriously endangered the home of local Zo, Natas! 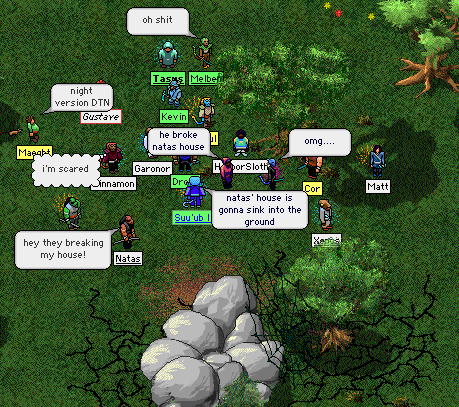 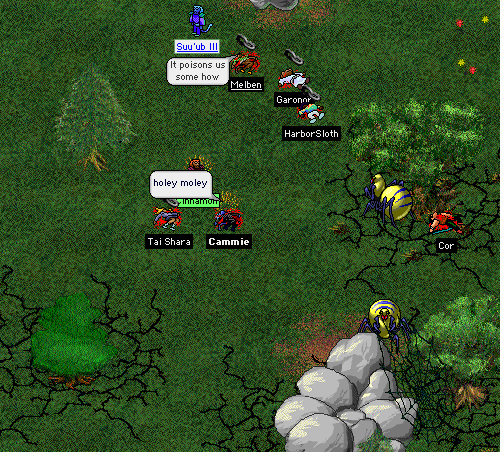 Then these nasty yellow poison noids appeared. They were called Wood Arachnoids, but they should be called Nasty Yellow Poison Arachnoids in this reporter's humble opinion. (You can also see the scope of the earthquake damage here.)

But that wasn't the end yet! Apparently the Noids decided to take "Death Trap" literally and unleash armored executioners on us! 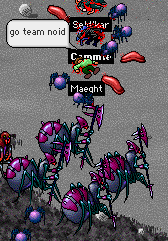 Noids marching in formation. Not sure if they are plotting our demise or practicing for the next pep rally, but either way it was CREEPY! Our merry band of Noid squishers finally managed to defeat the Armored Arachnoids, but to the great disappointment of this reporter they were not chainable to make trophies. Come on, who wouldn't want one of these cuddly guys in their house, am I right??

The questions remain: How did the Noids fashion this armor and weaponry? Is this the beginning of a great War with the Noids? Will DTN collapse into the ground, taking half of East forest with it? And does anyone have a couch Natas can sleep on?

Posted by Para at 08:14 AM
New Armored Noids 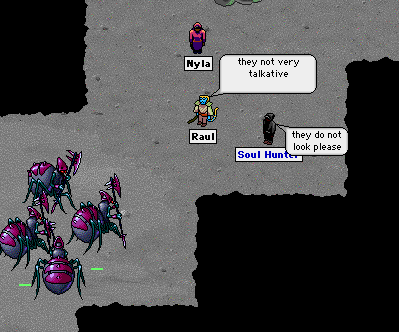