Arrr, the Pirates of Lok'Groton & Friends took a trip to Venables Island (TI) today ta drop off some building materials with Barny and ta hunt some Frozen Abyssal Hunters.. Tha fight to tha outpost was tha usual, rather uneventful fare of midranking shak and assorted ethereal nasties... until after tha materials gots donated. 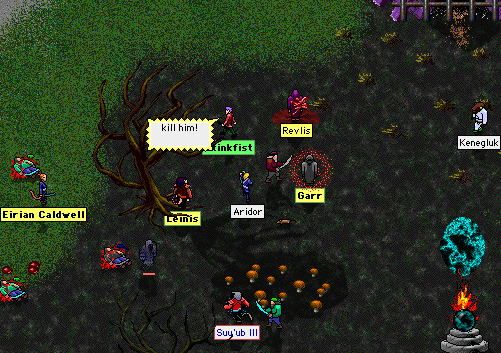 Initially we was caught off guard but soon, we turned tha tables on him and cornered tha old salty shak an he was slain in a most painful mannor. 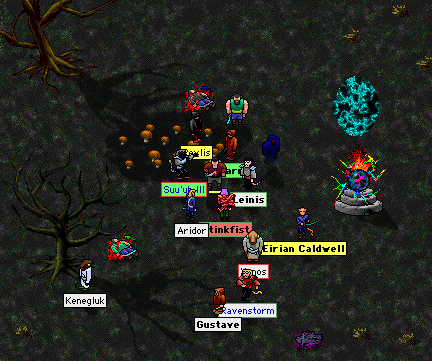 After tha old goon's death and making into a trophy, we decided ta venture into tha ethereal plane as Merek was jumpin in and out of tha open portal there likes a mad man.

We searched and slew some frozen abyssal hunters and other ethereal monsters but thar was no more sign of shak in tha immediate area in tha ethereal plane so we decided ta exit....

That's when we were greeted by another ambush, this time a large amount of lesser undead and banshees greeted us outside. They wern't much o a threat but then we noticed HIM.

An old Greater Death was watching us from tha corner of tha mini-temple tha shak gots thar, once his minions were destroyed he moved in for tha attack. 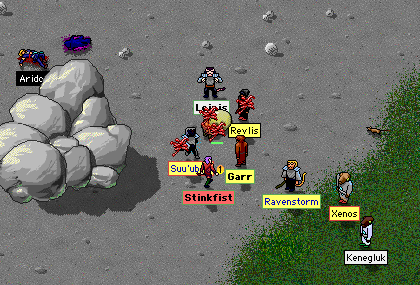 After a long, long, bloody battle, Boneshaker was destroyed, and so we decided, heys you'd make a nice trophy too, I gaves tha order ta tha crew ta pick themselves up and head on home. 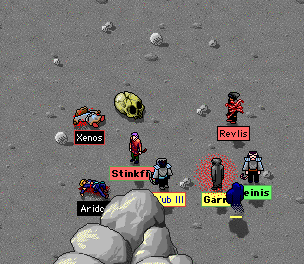 On me ways out Barny congratulated us on our well fought victory. He will spread tha word of tha crew & friend's epic victories over their shak "heroes"... soon... with any luck, tha shak will start ta turn away from tha cult in favor of tha Pirates of Lok'Groton & Friends. I wouldn't be surprised if soon thar were other shak willing ta throw their lot with us hangin around Barny & the greater Venables Outpost Area... our reputation on tha island is only growing more fearsome.

Keep an eye out when venturing around old Tenebrion's Island... ya may run into a shak who wants ta join us... or kill us... be on guard.

Chaos Storm #651 has swept the Lok'Groton island chain. Please post any changes you have observed and wish to share with others in the comments. If you don't want to read possible spoilers, please do not read any further!

* Development continues on new areas.
* No crashes in 467 days and counting.
* Youll have to explore to discover the rest of this Chaos Storms changes. Enjoy!

For Mac users, weve recompiled the client in Xcode, so that it will run natively, more or less, on modern systems.

The traditional PPC/Carbon client is still available for v651, but unless theres a show-stopper bug in the newer one, we intend to drop the older client for v654 or v657.

The new native client requires Mac OS X 10.4, at a minimum. Accordingly, those few players still using older operating systems (Mac OS 8  10.3) will no longer be able to access the game. Were sorry about that, but its becoming impossibly difficult to maintain the old client, relying as it does on long-obsolete development tools. 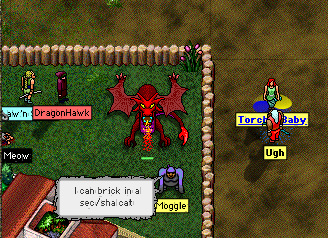 There were only a few exiles out of the library this morning. I heard the call from Torcher Baby that there was something hideous in the center of town. I abandoned my usual search for orga near town and hurried back to find people running all over the place trying to find out what was causing that loud piercing sound. It send shivers up my spine as I joined in and found it had been trapped behind the fence where exiles congregate.

Law'n was there to watch and stood speechless as the monster was literally incinerating those who dared to attack it right at her feet on her lawn!

It looked like the drakes I remembered, but it was much brighter and appeared to be something that would come out of a volcano. Its breath was searing, and was difficult to survive for more than a couple of seconds before falling. People were finally starting to come out of the library, and we made sure all had a chance to try to kill it. It finally fell and the body was stuffed, mounted, and presented to Torcher, who bravely healed the weak and fallen.

Chaos Storm #648 has swept the Lok'Groton island chain. Please post any changes you have observed and wish to share with others in the comments. If you don't want to read possible spoilers, please do not read any further!

My apologies for posting the Chaos Storm entry so late.

* Several construction projects around town have been completed.
* A metaphysical gerbil has been retrained.
* Great swords are once again merely great.
* Bank tellers now understand withdraw all and deposit all for personal accounts. (Fiduciary regulations require that banking commands for clan accounts continue to use explicit, numeric amounts.)
* Fixed a silly bug that caused the Mac client (under OS 8/9) to quit immediately upon launch.
* Numerous other bug fixes. Please continue to /BUG any problems, comments and suggestions.
* No crashes in 446 days and counting.
* Youll have to explore to discover the rest of this Chaos Storms changes. Enjoy!

Posted by Para at 10:50 PM
Southern Estuary or New Vreeland? 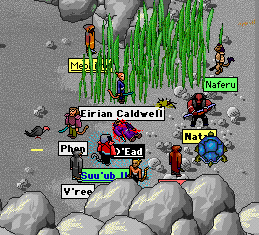 Here are some pictures from a newly discovered area, the Southern Estuary, renamed to New Vreeland. 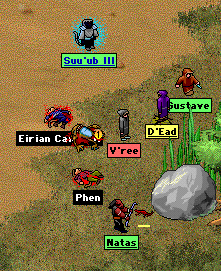 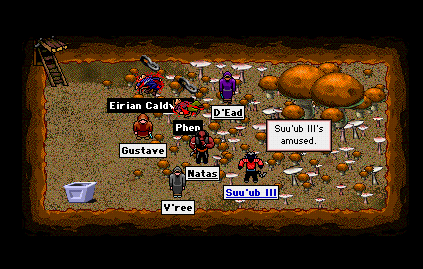 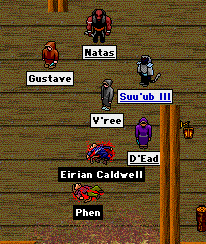 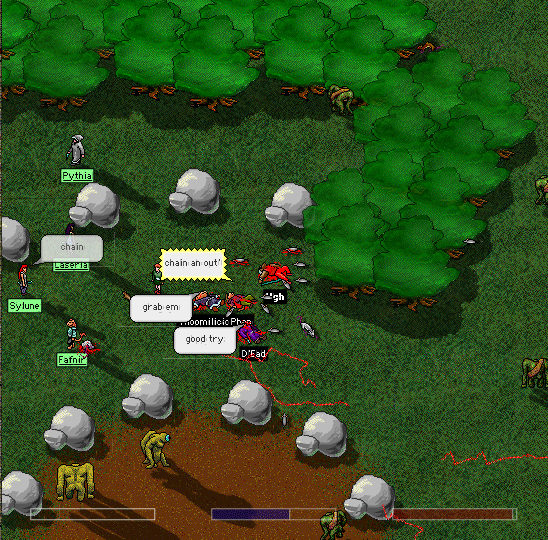 After some of us fell in the first attack on OC4, we were rescued and healed. We then regrouped for the final assault, which was successful. 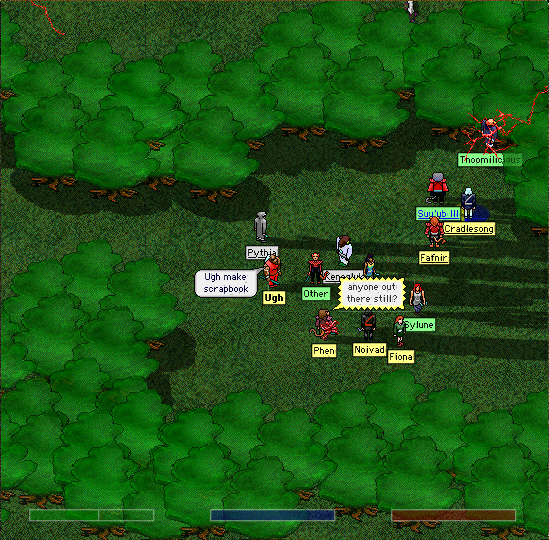