Chaos Storm #843 has swept the Lok'Groton island chain. Please post any changes you have observed and wish to share with others in the comments. If you don't want to read possible spoilers, please do not read any further!

* Happy New Year!
* No changes this version are public.

Posted by Para at 07:41 AM
Lily Fren Promoted to Full Mystic 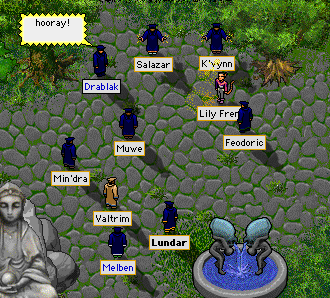 Lundar reports that Lily Fren has been promoted to Full Mystic.

Posted by Para at 07:35 AM
Court Archives and Election Archives

I've added the Court Archives and Election Archives to the TMN Favorites buttons.

Posted by Para at 03:32 PM
A Mammoth Org in the Ensconcement Village

As your readers have already heard, several storms ago we exiles found our way into the Ensconcement where we discovered a secluded village and heard mention of the mysterious and elusive Org.

After this most recent storm, I was asked to move the cloud back towards the mountains village so explorers could drop down and continue hunting and exploring the area. When we reached and secured the village, we first found that one of the village residents, Ovar, is working to repair the walls in the village. 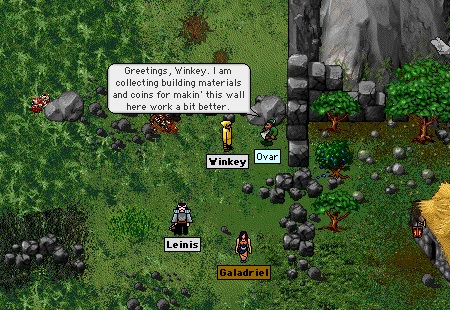 Our expedition quickly supplied Ovar with all the materials he needed and hes just waiting on permits to come through to finish his work. However that is not the most interesting thing we learned. Several hours into our hunt, our group encountered an Org who followed us into the village itself. 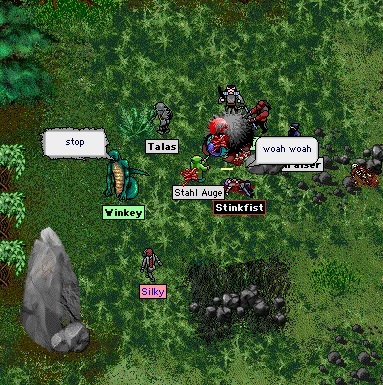 At first we were unsure what the creature was, but as it attacked our group we realized this was in fact a Mammoth Org and the group stopped our attacks and corralled the Org into a corner of the village where I made attempts to interact with the creature. 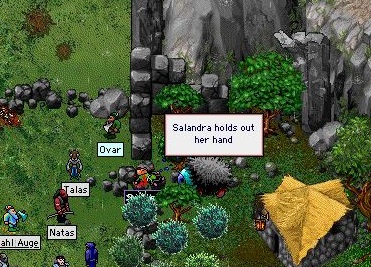 Despite our efforts were unable to establish contact with the creature, but the Captain did his best to preserve its essence for the lands. It is strongly recommended that exiles avoid killing these creatures, as best as possible, until we know more about them.

Realizing what the Org look like, members of the Pirate crew seemed to recall the presence of caged Org in the Orga Stronghold. It seems like the Orga are still seeking to kill or capture these ancient predecessors.

Chaos Storm #840 has swept the Lok'Groton island chain. Please post any changes you have observed and wish to share with others in the comments. If you don't want to read possible spoilers, please do not read any further!

* Happy New Year!
* All changes this version are secret.

Posted by Para at 10:16 AM
New Underground Builder 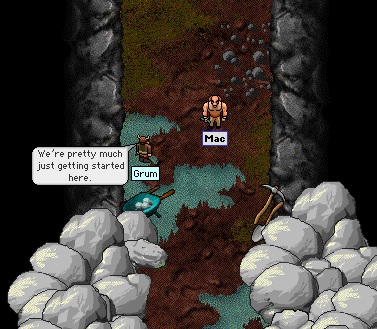 I found a new builder in the tunnel to the University earlier and though I would share since he's hidden himself behind a path. He's a couple snells east (or is it Zo east?) near a pile of rubble along the south wall.