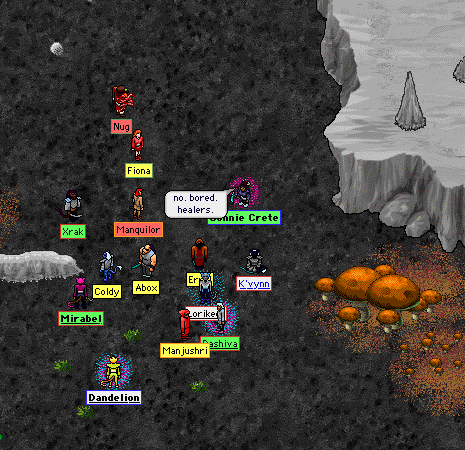 I knows its been a while since tha last report. I gits distracted bashin and dont do so good with tha reportin pitcher takin.

Our mosey tooked us ta tha rainforest. We sumhow ended up with nearbout everybudy (Stora dont git outta town much). While technical, were (not we're fer ya grammarians) strong enough fer bigger things, is more a case o "Where aint we been inna while?". Also, didnt wanna scare Lorikeet too bad (everybudy else has internalized my plans fer keelin alla town - she jest knows innellectually) . First (tha gray pitcher) we did tha pit dive - because no one in their right mind would do a pit dive rather than go tha long way through gloamins. Then, ta keep pepples on their toes, we charged tha yorilla camp.

Tha handy thing about champeens is they gots tha ability ta brick on demand. Xrak came along causn he felt bad that we dont got no token ranger. Honest what does better is more bb'ers causn then less likely ta git bored healers. Is tha conditionin aginst red I think.

We dropped Abox off in tha water ta git home at Clairbreak and perceeded on our way. Tha grand plan were ta git ta Tepui. Thing is, um, I dunno my way around tha RF after tha Tree o Patience. It's all a big ol blur. So anyway, we were workin our way toward Tepui but got distracted by a web place that I honest aint never been. So we saw that and I were sightseein rather'n takin pichers. Then there were a secret (ta no one but me) lil tunnel that I aint never been so were sightseein rather'n takin pitchers. And then we were at Tepui. Had a grand ol time and realized we didnt got no vine ta git out tha south door. So we EPS'd home.

*Disclaimer: We is technical an invite only group. But we'll invite anybudy that wants ta come. Big Huge Problem: Ima actively tryin ta keel tha party and cause a depart. Also retreatin be dun mostly when one healer's left standin what happens ta have a chain. This aint fer tha faint o heart. Nor be it fer tha departophobes.

Chaos Storm #1033 has swept the Lok'Groton island chain. Please post any changes you have observed and wish to share with others in the comments. If you don't want to read possible spoilers, please do not read any further!

Posted by Para at 12:22 PM
Clan Lord on Discord

Org du Lac reports on the Clan Lord Sentinel that many exiles are now using Discord to communicate.

Posted by Para at 09:05 PM
Missing Connie on Top of a Bookcase Somewhere 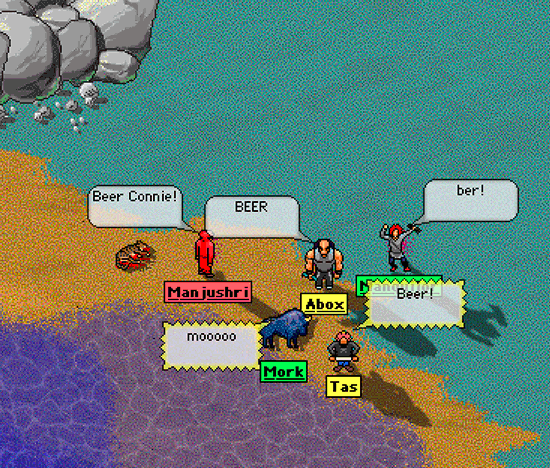 We've been missing Connie cause she's stuck on top of a bookcase in the library for the last couple of hunts for nearly a week now and her interwebs are all wonky; but, FB and FB/DM hunts continue and been either kidnapped by or kidnapped folks anyhows and we still go out and have some fun.

Last night we took a shot from southern? estuary (entering from savanah/dunes) after Manj and Manqy and I kidnapped Abox and eventually Mork for some fun and falling. Shaky bailed us out a few times, but in all we had some fun and missed Connie so we took a picture to share with her and thought it'd be cool to send ya a report that we're thinking of her and everyone else around that area.

We know Connie's bookshelf is drip dry, but the library around her gots some water she's waiting for it to recede so she can wade out to the nearby store and get more beer 'n and we hopes anyone else flooded or damaged in the library is doing OK. Missing Fiona, hope she's OK - I think we last saw her on Tuesday. Dunno who else, hope they're ok... keeping them in our thoughts.

Our best from Falinea's Blade and Dwarven Militia to all those affected by that nasty library storm.

P.S. Yup, Tas sees a PF, he has to take it. So we pf'd our way through! Huzzah! Unfortunately, we didn't find Mork any dispatches, we kidnapped him late and Tas was having so much fun he almost forgot to take a beer break. *gasp*

P.P.S. Connie from the library is asking after Shiner and Kaitlyn if they're OK too.

Chaos Storm #1030 has swept the Lok'Groton island chain. Please post any changes you have observed and wish to share with others in the comments. If you don't want to read possible spoilers, please do not read any further!