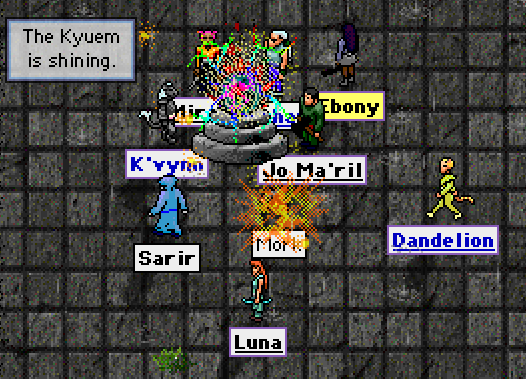 Falinea's Blade is back, and we decided on Soldi, day 26 of Fall, 620 -- on the day of the New Moon -- to go exploring Lugubrion's Castle, as one of our members had a theory regarding fish . . . (yum) and Lugu's Keep. It has been years since I've explored the keep. I really dislike the damp, but libraries . . . I could spend hours in the library there!

We explored,and we tossed fish here and there (restrain me) . . . and we inadvertently startled one of Lugubrion's Sarirs! She fled from us initially; she was scared and frightened. Lugubrion detected she was attempting to . . . escape and attempted to track her. We decided to assist her and hide her while we endeavored to establish a way to take her to safety, out of the material plane to the ethereal plane. 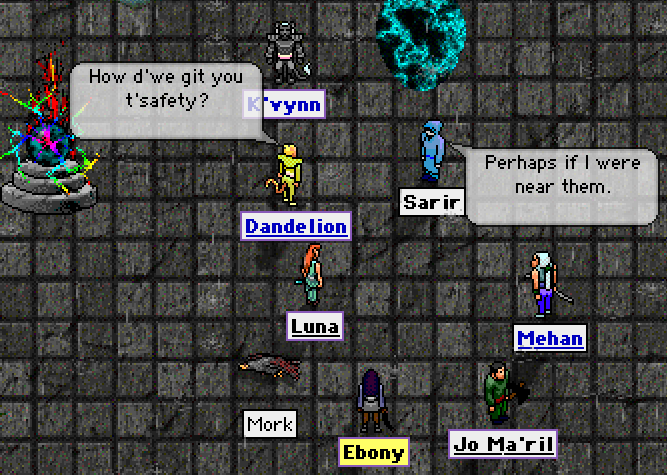 The town began eventually holding back the flood of water guardians that approached through the marsh, east field, north field and into town. The walls were not quite enough to keep back the water; however, the town exiles kept them at bay. The flood of guardians kept tracking Sarir and I where I had taken her for temporary safety, so I whisked her back into the keep, to hide her right under his nose, in his own keep, as we worked to put together the parts I needed to create a kyuem.

Between the fish, the exploding kyuems, and the flood of guardians, we eventually were able -- with the Sarir's guidance -- to place and activate a kyuem within the keep and thus she was able to escape. Although, we may have disturbed things even further between EP and the lands.

Lugubrion was not happy at all. We, of course, meddle in what we do not fully understand -- which he made blatantly clear.

The folks who were in this main endeavor were: Connie Crete, Dandelion, Ebony, Jo Ma'ril, K'vynn, Luna, Mehan, Mirabel, Mork, Warplet, and Wayfarer.

Hopefully the world is still intact . . .

Chaos Storm #1171 has swept the Lok'Groton island chain. Please post any changes you have observed and wish to share with others in the comments.

5/6/2020 v1171
The greatest compassion is the prevention of human suffering through patience, alertness, courage and kindness.  Amit Ray (b. 1960)

* We hope that everyone continues to remain safe and healthy during the new normal.

* Its so very good to see old faces again. And by faces we mean pixels. Welcome back to Puddleby, returning players!

* Fixed bug where monsters that spawned friends on spawn would spawn additional friends when they were befriended and the befriend ended. Nuff said-ed?

* Extended the amount of ranks the newbie experience booster will boost to. It previously boosted up to 2000 ranks; it now boosts to 3000. This also tweaks the amount of boost at different ranks (for example, it used to switch from a 9x bonus to a 8x bonus at 200 ranks; it now does this at 400 ranks). Any suggestions for further improvements to the booster, or newbie experience in general, are very welcome.

* Fix a bug affecting certain capped skills after untraining. For some trainers, it would not let you get back up to the cap after untraining due to fractional rank gain (for example, if you had 9.3, and the cap was 10, it wouldnt let you train even once, because that would go to 10.3). Now in this case it will let you train just up to the cap (so from 9.3 to 10, for example).

* Development continues behind the scenes on new areas.

* One more secret change; we cant spoil everything.