The pop-up law office of Skirwan'slawyer and Associates has closed after being open for a brief period.

TMN has received word that the following note has been found posted to the sides of several buildings in Puddleby.

As of this day, Soldi, day 79 of Summer, year 623, MaTa Salandra renounces her membership in the Mystic Council and the Mystic Guild of Puddleby.

(Written lower and in a slightly messier hand:)

The guild is dead.

I was there in the years after the Ripture Wars. I saw the height of life within the Guild. I saw what I thought was corruption and it drove me to what was the Shadow Council. It drove me insane.

Years later I returned full of anger and hatred. I know now that the corruption I saw before has poisoned the body. I see now the lingering death of the Guild and a Council who is without the will to stop it. It drove me to freedom.

Now I walk alone filled with despair and longing. The tendrils of that dying body no longer have purchase on my soul. I have broken a vow to those I consider friends and for that I am sorry. I pray for their escape.

Now I walk alone  Now I am truly free.

(The last words are written deeply.)

On Saturday February 6, at 11 AM PST / 2 PM EST / 7 PM GMT / 6 AM AEDT we will be attempting to place a Kyuem in Orga Camp 3. Over the next several weeks well be collecting donations to build the Kyuems needed and power them once they are placed (Salandra is the point of collection). This event is open to every exile.

For more information please visit this scroll (http://maps.clanlord.net/Salandra/Information/Kyuem.html) or go to the Kyuem Event forum on the Discord.

We're going to need a lot of help to get this done. Please join the community to forward the Ethereal Story!

Posted by Para at 12:13 AM
Sticklord News Network. Season 1, Episode 1

My apologies. Somehow I missed bringing attention to the inaugural relaunch of SNN. I hope more broadcasts are forthcoming.

Posted by Para at 08:13 PM
Here Be Dragons Mapping Guild

Here Be Dragons has been a hopeful project for the last few decades or so, and it's finally becoming a reality. More information can be found on our scrolls, but the general intent is to create a mapping guild that brings together the various exiles who have not only dedicated themselves to the creation of maps, but also the sharing of the knowledge of our world.

As of today, the first handful of invitations are being sent out and the first members are officially joining. Their works will be coming to our scrolls over the next days. If you are interested or know someone you think should be a member of our guild please read through our membership information and get in touch with Salandra.

Posted by Para at 06:45 PM
A New Tariff on Textiles 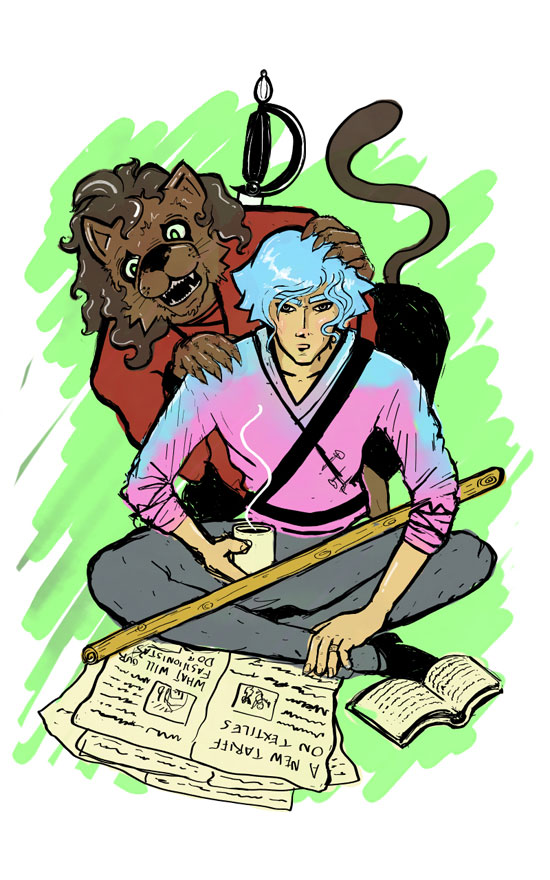 TMN received this report from Borzon and Largo today:

PUDDLEBY  Ascendancy officials have levied a new tariff on textile exports to the LokGroton island chain. Affronted flocks of foxy fops and fabulous fashionistas fear the fallout of this frocking fabric fee. Community conversations concerning the complexities of this clothing crackdown have commenced. The consensus? Contempt. Can our closets cope? Find out on the Discord sinstone network.

An intrepid investigative force set out today to explore the workings of the Annulus. A formidable group of fighters, healers, and mystics made their way to the large gaping pit on Tenebrions island. After some discussion, they jumped down in tactical order. It was immediately apparent that this part of the EP is unhealthy for mystics. It was rather perilous for fighters and healers as well. Most were fallen within minutes. This was repeated several times. Luckily, after each foray, at least one fighter survived long enough to chain the others back to town. The chore of chaining often fell to newly-eighth circle fighter Lexa and champion extraordinaire Haffron.

Healing was provided by Darth Wader, Penthka, and Kathius. After six successive rounds of dying, chaining to TC to be healed, and re-entering TI, they were able to clear enough for science to take place.

A number of interesting phenomena were noted during the course of the investigation. The group concentrated their efforts on the west side of the annulus. Although surrounded by an invisible barrier of some sort, there seems to be some sort of path or other mechanism by which one could theoretically enter. Several exiles reported being randomly ported out of the snell and onto PI or back to the edge of the pit on TI. There was an earthquake preceding one of these random ports. Salandra, the prominent mystic, was twiddling with the friendly clouds surrounding the annulus when a large spawn of decidedly unfriendly clouds of ether appeared out of nowhere and wreaked havoc. Aspasia, Borzon, and Poplar all reported negative side effects after touching the clouds of ether. After another trip to town and back, the acclaimed ranger Biro brought along a befriended banshee and attempted to use it to probe the mysterious pathways. This resulted in her immediate porting back to PI. The remaining exiles started noticing episodes of being ported short distances from their original positions. One such instance resulted in the illustrious healer Kathius falling to an ethereal whirlpool.

The adventurers decided that enough science had been conducted for one day and that a larger force would be needed to investigate further. They retreated to town and celebrated their several near escapes.

Chaos Storm #1206 has swept the Lok'Groton island chain. Please post any changes you have observed and wish to share with others in the comments.