ThoomCare Media Network
TMN: Thoom News You Can Use
Sor's Auction and the Big Bet

In the most recent entry on the ELF Blog, Lundar reports on the auction and Sor's subsquent big bet at the blackjack table. Sor donated the proceeds to the Armor Fund.

Azriel reports on a rescue deep in Melabrion's Mines in his most recent journal entry.

Posted by Para at 02:50 AM
Phroon Advances

Posted by Para at 02:40 AM
Danger: Falling Rocks

The Control Room can be a very dangerous place, as I discovered when a boulder landed on top of me.

Posted by Para at 02:36 AM
Discovery of the Control Room

Shortly after the chaos storm had hit, I decided I would hit the Cloud for some coins (and earth knowledge)! On my way out, I noticed the weird patch of ground which leads into the control room. The place looked pretty mystic-y, so I recruited Sutai, and Talin and Manx just in case pathfinders were needed. After (secretly) experimenting with the controls for several hours, our team could not figure out the purpose of the control room. This honor was left to Phiros' team of mystics! Later that same day, the Cloud was sucessfully "driven" to the mirror to allow people to obtain Cloud access! This is a great day for Puddleby!

Malkor recently opened a portal in Town Center, right on top of some coins dropped by Kerrah. Kerrah was able to carefully move up next to the portal and grab the coins without falling into the Ethereal Plane.

Unfortunately for Malkor, he managed to fall into his own portal.

Chaos Storm #387 has swept the Lok'Groton island chain. Please post any changes you have observed and wish to share with others in the comments. If you don't want to read possible spoilers, please do not read the comments.

Fellow Exiles,
Friends whose company I have enjoyed for many years,
Various arch-enemies,

Time has come for me to retire from the realm of Puddleby. I never really believed this day would happen, but it has! I have found inner peace, and I'm going to meditate until the great Sun Dragon calls me.

To rightly celebrate this festive moment, there will be a major keg-opening, pie-throwing and pretzel-crunching event in town center, followed by a big auction of valuable stuff I no longer needincluding chains, metal, various ores, EPS, clothes, weapons, instruments, pass key, horn!

You better come with an empty bag and padded pockets.

Profits will go to a last round of blackjack, and/or the Armor Fund.

If there are leftovers, I may hold another auction the day after, Sunday, at the same time.

-Sor, Knight of the Rainbow

Posted by Para at 11:53 PM
The Flutuador

The ship Flutuador was originally built to sail to the fabled land of Peaceton. Unfortunately, it didn't float so well, so we lodged her on the bottom near the docks and converted her to housing.

I am offering a prize of a free crew cabin plus rent for a season or two to the first person who can tell me the original name of the ship. All clues are aboard but some outside research may be needed. If I appear to be sleeping, please submit your entries via Koppi in town and I'll keep my ear open.

Vequalir has posted the latest ELF meeting minutes and hunt report on the ELF Blog.

Posted by Para at 06:13 AM
Found: One Floating Electric Rock

Has someone lost his or her floating rock? Find out more in Aravir's latest journal entry.

Dude sent TMN these images of a landshark attack on Kismia's Island.

TMN Spoiler Warning: this story may contain information some readers would prefer to find out on their own.

with the booster stone that teleports you to PC6.

You can now also see the maps from PC6-9; it's within PC9 that the legendary Pathfinder book 2 lives. You will also notice in PC7 there is a PF area that needs a trip to book 2 to visit; beyond this lies PC10+, areas which are still being explored by us. More on that later.

There are also PF entries in caves in the Foothills, which we have called the Slate Caves (SC) for the obvious reason of the new critter in there. We have currently found SC1-7 but have yet to stabilize in anything but the first few of them.

More on this another time too. When we have news of worth, you'll know it, trust me!

As an update on our progress for those who ask me or care, we did our 80th trip this week. We have still only reached the PF book once though! We are concentrating our efforts on the new areas that we have found with our book 2 pathfinders. We hope to make a breakthrough soon.

Lastly, I hope someday another group makes use of these maps. They aren't the most interesting read in the world, but for people like me, who love maps, I know you'll like them!

Posted by Para at 09:24 PM
Changes to TMN Favorites

Slyph's excellent resource, the Puddleby Calendar of Events, has been added to the TMN Favorites menu. I removed the OpenGL Client button because that application is no longer necessary as a separate download. The OpenGL Client link will remain for now under Key Applications for archival purposes.

Recently in town center, Zorton did his most amazing mystic stunt ever! The visionstone is only a few seconds long.

Posted by Para at 07:53 AM
Tenebrion's Tower

In his most recent journal entry, Azriel reports on expeditions to Tenebrion's Tower and Melabrion's Mines.

In other Tenebrion news, Aravir sent TMN the following evidence that Tenebrion has been spotted in another land.

Chaos Storm #385 has swept the Lok'Groton island chain. Please post any changes you have observed and wish to share with others in the comments. If you don't want to read possible spoilers, please do not read the comments.

Some exiles have wondered how Slyph would look after undergoing a race-change operation to improve her chances to join ThoomCare now that she is seeking a new clan. TMN has commissioned an artist's rendition of Slyph as a Thoom (as seen above) to satisfy our curious readers.

Puddleby, last nightlying in wait, Zen, of the Sisters of Benevolence, cast a spell on me, convincing myself that I was a witch. Once I was a member of Zen's ugly little cult, Astor made his move, grabbing all the power he could. (I'm shocked: these two can scarcely dress themselves without help, and they've taken my clan.)

The Temple of the Moon, glorious clan of healers, is ruined by the presence of Fighters and even a dirty mystic. I remain clanless, homeless, alone (yes, Althea dumped me in the middle of everything), and without a single idea as to what might happen next.

Are any clans looking for a healer?

Super Chicken, that pesky and plucky poultry, will recount "All About The Rift Wars" today from 12 P.M. to 1 P.M.

Posted by Para at 08:59 AM
Clan Lord Java Client

The Java client previously released for Arindal is now being openly tested for Clan Lord. Details on the Java client can be found at the Clan Lord Sentinel.

Some poultry fell on a particularly busy night in the Northwest Forest. While the rescue party didn't have any trouble finding him, none of them had chainsthus began a pull line that went all the way back to the town center. Check out the visionstone of the pull line. 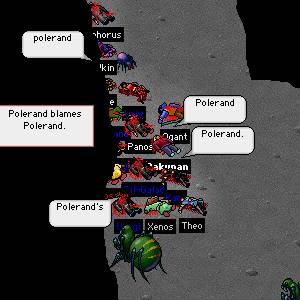 Bakunan sent this report of a series of rescues at the Jade Noid cave that happened shortly before the retrograde days in Puddleby:

I was involved in the 2nd-to-last Jade Noid rescue attempt. :-b

There were more fallen, but either they departed, or were still sliding down the cavern. A last massive rescue effort succeeded, but not before multiple chain breakages and a lot of web-slipping. Thanks to the huge community support that made the last rescue work. 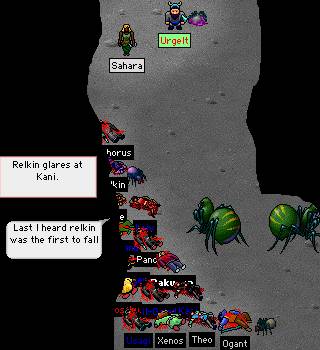 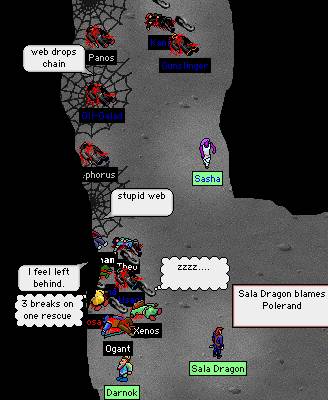 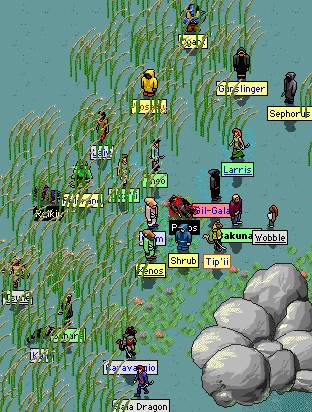 Posted by Para at 07:37 AM
Captain Morgan's Boat

Captain Morgan's boat is now docked at the Puddleby Pier. Exiles are renting rooms on board.

The nautical atmosphere naturally has proven very popular with the local Thooms.

The boat has a small rockodile infestation problem.

Posted by Para at 09:33 PM
Holes in Puddleby

Lundar reports on the recent retrograde chaos storm in his most recent entry on the ELF Blog.

Chaos Storm #383 has swept the Lok'Groton island chain. Please post any changes you have observed and wish to share with others in the comments. If you don't want to read possible spoilers, please do not read the comments. 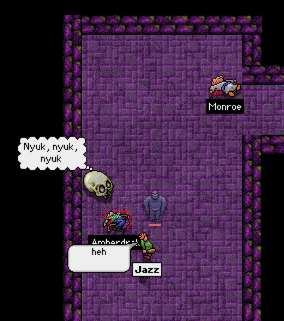 There was a group in the Dark Temple last night trying to figure out what to do with a Greater Death, which as you know in our weakened states is a not a critter to be triffled with. Anyhow, apparently this Greater Death has a sense of humor because it actually "nyuked" at us at one point. Monroe suggested punning it to death and I tried to tell really bad jokes with no punchlines . . . neither worked in killing the critter, and in the end we were forced to flee after Amberdrake was raised. Good times, great oldies . . . CL v34! :-)