ThoomCare Media Network
TMN: Thoom News You Can Use
The "Orga Ire"

This is a follow-up report on the orga infestation of the eastern areas from town, which Sativa reported for the 85th day of Summer. We thought we could sense the leader of this new tribe, but we could not reach him. Today, just four days later, during the early morning on the 89th day of the season, drums were once again heard to the east.

Sure enough, with a quick investigation (which left me fallen for a number of hours), many dangerous orga had once again taken hold of the dark east forest near the southern wendecka passes. After some hours of fierce and often-tiring combat, the relatively small but persistent team cleared the orga to the slime cave.

It was here that the orga "ire", as many had taken to calling this orga, had his (her?) last stand. We first tried to communicate with this mysterious figure, though he did not respond well, even when J'nder gave him a back massage to try and soothe his tensions about being faced with so many unknowns. The orga summoned a number of minions to attack us, though not enough to be truly effective. It was then that he revealed some of his other powers; he transformed into an orga wrath, and then into a lightning-shooting shaman. This display of power seemed to have made he weak; he was quickly dispatched by eager fighters at this point.

With that being done, the offending orga were seemingly completely eradicated from the area.

Another important note: during this encounter with this orga leader, I received strong and definite sensations from the waterfall behind the 'ire'. The emanating power from behind the waterfall made it distinctly clear that there is a path of the orga hidden there. I could unfortunately not determine what sort of path that may be; but as of yet, no one has seen or been able to open it. 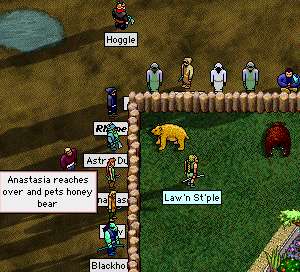 Hoggle made a request for all manner of critters to be brought to the zoo, to accompany the grizzly bear that he found. They were to aid him with a Ranger demonstration.

He mentioned that he had a contract with the grizzly, whatever that means. I missed the artak and the two slugs being taken out, but had my visionstone ready for the main match. 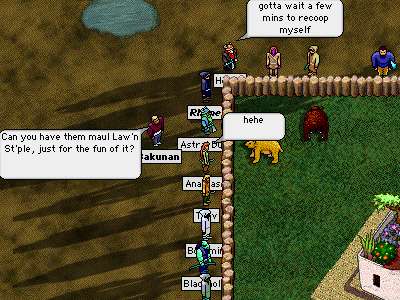 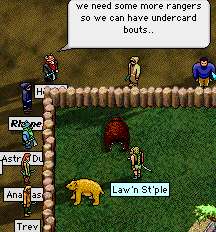 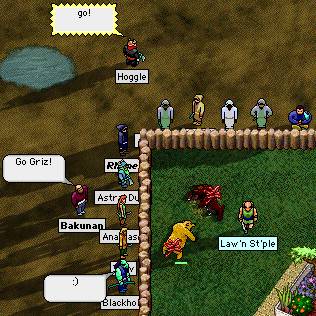 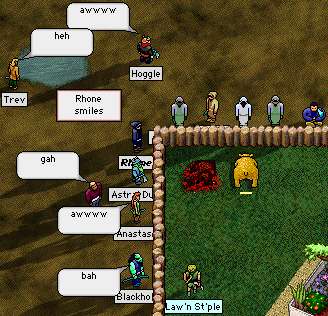 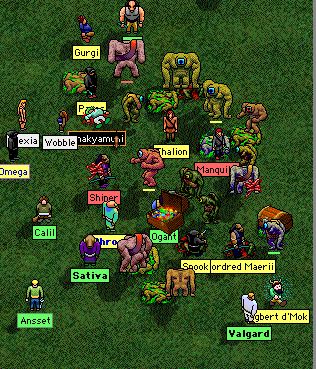 I was relaxing in town center, when suddenly yet another attack from the orga came from the east. In a short amount of time, we could tell from their drum beats that they were from the new tribe. Sure enough, we found our mission was to find the war party leader in the midst of throngs of orga. 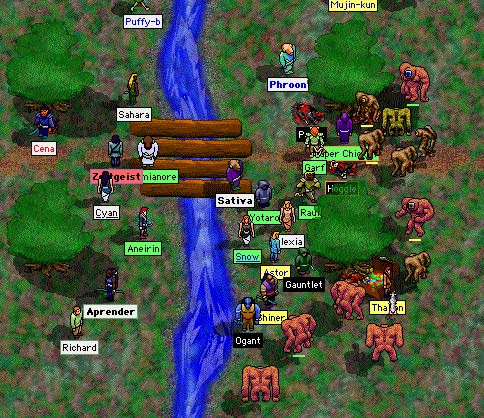 We were stopped at the east field bridge for quite some time, but soon were able to break through, and push the orga back further and further. 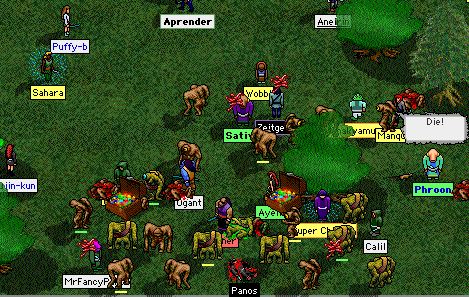 After hours of battling east and southward, through hordes of Warlocks, Hemlocks, Dredlocks, Furies, Frenzies and more, we cornered them in Gerag's slime cave. 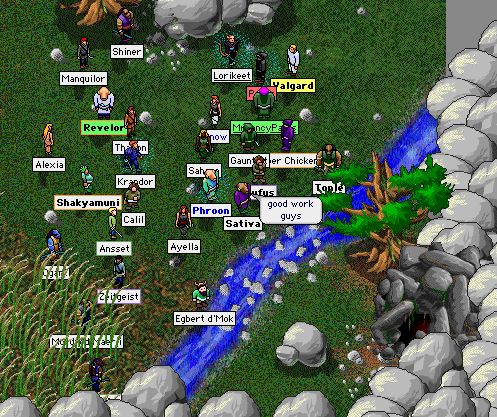 Through my scanning, I was able to find a green orga within the cave, and we can only assume this was the leader. Unfortunately our party so far has failed in our mission, as the cave was filled with Dredlocks, making it impossible to get inside. For now, the green orga is still hiding in the cave. With luck, during another attempt we may be able to find it, and learn more about this mysterious new tribe of orga.

Chaos Storm #391 has swept the Lok'Groton island chain. Please post any changes you have observed and wish to share with others in the comments. If you don't want to read possible spoilers, please do not read the comments.

Drablak reports on enjoying a glass of fermented fish oil in his most recent journal entry.

The armor deal with Melabrion has been completed. Lundar has filed a report on the gathering and the transaction at the ELF Blog.

Fleming reports on Dun'ilsar discussions and a trip to Camp Dred in the most recent Meeting Minutes at the ELF Blog.

In his latest journal entry, Drablak reports on the departure of Sor, the return of Babajaga, and recent developments with the Cloud (including the discovery of Sfoft's Peak).

Posted by Para at 06:48 PM
Kudzu: A Miracle Cure for Dwarves?

Recent research suggests that dwarves may benefit from the medicinal effects of kudzu.

A HUGE group of exiles moved the green portal so that we could jump off the Cloud to get to Sfoft's Peak. Trev and I were the first to land on the peak successfully. When you jump off the Cloud to the peak, you land hard, but it does not take nearly as much Histia to survive the fall from the Cloud to normal ground. Parachutes are for sale for 300 coins from Faleen Sfoft. My last few zodiacs of determination to find this place has paid off!

My fellow chickens attacked Town Center recently! Although they weren't very effective, next time we will take town for sure! Oh, my chickadee friends, next time we'll eat the thooms first!

Posted by Para at 12:34 AM
Ethercle Gathering

Azriel made a trip to the Ethereal Plane with the Puddleby Task Force. Read more about it in his latest journal entry.

I finally passed my second circle test, using the unfashionable "Zo Method". This proves that you don't have to be a Zo to use it. It's a hard and slow way to pass, but it's the proper way (because if it was the south rat towers, you can't just raise the fallen with the vermine still around, you have to kill them all
first).

Immediately after, I passed the third circle test, though I used the "cheating" method to do so, by just healing without even trying to kill the creatures first. Couldn't pass fourth after that, so it serves me right for cheating.

Thanks to Shaky, who always encouraged me to pass in my own style, and for his gift of a sylphstone ring. And now who's the new strongest first circle healer?

Not sure how many folk will be interested, but anyway, I made a visionstone of the event and it's in the Puddleby visionstone repository at http://movies.puddleby.info/search.t?show=82

Posted by Para at 12:06 AM
Music Writing Contest

Music Writing Contest!
Official information and rules can be found at:
http://shadowearth.pucks.org/index.php?page=BardContest

Posted by Para at 11:39 PM
The Future of Dun'ilsar

Interested in revitalizing Dun'ilsar? Exiles are discussing ways to bring back the Dun'ilsar tradition of clan challenges.

Chaos Storm #389 has swept the Lok'Groton island chain. Please post any changes you have observed and wish to share with others in the comments. If you don't want to read possible spoilers, please do not read the comments.

This be prolly old news, but it were news ta me so here goes.

I were out wanderin around tha Isle o'Contested Ownership or Tha Isle Formally Known as Tennys. First tha peculiar thing I found were there were at least 3 separate Sarirs moseyin around. Asked em what they were doin, but they might coulda had an issue with tha phrasin o tha question. Anyways, no response. Then I decided ta go see tha sheeps. So there I were leanin up aginst tha fence tryin ta pet em and thinkin that beer went good with mutton. And I were able ta jump tha fence. Down right peculiar.

Posted by Para at 11:32 PM
The Cloud Control Room

Aravir has filed a report on the workings of the Cloud Control Room in his most recent journal entry.

Here is the group that helped Sutai complete the Giant Crawler Challenge (not pictured is Hadji). After roughly 90 minutes of prep time, the group was able to smoothly and systematically hit four areas and allow Sutai to kill the required number of giant crawlers needed to complete the challenge!

Congrats to Sutai and all involved -- and thanks to the citizens of Puddleby for supporting him during the hunt!