ThoomCare member Phroon now has 1,000 Respia. Read more about it in his latest journal entry.

Shakymuni reports to TMN that the University of Puddleby is searching for volunteers to help with the administration of scheduling tasks. Those interested in working on this project can find out more at the Clan Lord Sentinel.

Behold! My annoyingness has doubled! Now I can grab foot or gnaw foot!

As reported in the ELF Blog, Thoom Merlisk accompanied ELF on a recent hunt.

Posted by Para at 09:24 AM
Training and Travelling

Azriel has updated his journal with some thoughts on his future training as well as reports on trips to the Ethereal Plane and the Dredwood.

Posted by Para at 09:11 AM
Desperately Falling

Measle has two new updates to his journal. The first features various images from the perspective of a new exile hunting. The second is a guide to dating in Puddleby.

Posted by Para at 08:24 AM
Beer and Decorating

So I were wanderin about and drinkin, and stopped by Marshybeby's. Seems he too luvs tha subject that be near and dear ta my heart. I caint believe in alla time we has visited, we hasnt talked extensively about beer.

Then I were thinkin about tha darshak that were considerin a rumble yesterday. So I moseyed over ta see how they was doin. Well, lookin at their headquarters, I realized that they needed serious decoratin help. I tol em ta contact Tara causn she is tha best decorator in tha lands what be in tune with tha pirate mindset.

In his latest journal entries, Raul reports on training with Evus and his most recent hunts.

Posted by Para at 10:26 AM
Groggy Chicken 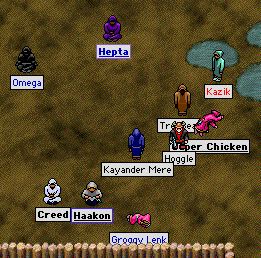 An alarming (to some) sight was seen in Town Center in the wee hours of a recent morning. Is it possible, as some speculated, that Groggy Lenk is turning into a Mini-Chicken?

Posted by Para at 07:46 AM
Anwen Botsney

I discovered a new phantasm collector in my travels; her name is Anwen Botsney. She also sells phantasm pages for 100c.

Chaos Storm #395 has swept the Lok'Groton island chain. Please post any changes you have observed and wish to share with others in the comments. If you don't want to read possible spoilers, please do not read the comments. 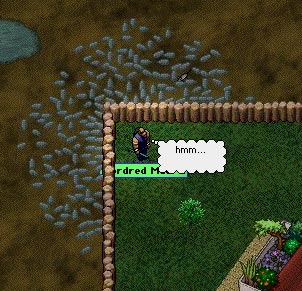 Today town was overwhelmed by some miserable little critters called Devil's Leeches. They bite really hard for something smaller than my toe, and they like to attack in swarms. I happened to be lounging in town by myself drinking some of Connie Crete's beer when they showed up. I killed a few, then they chased me into Gaia's Garden. I made faces at them from behind the fence and tried to alert the townfolk who were out hunting, but alas, the leeches learned to hop fences, and they laid the smackdown on me. Lots of folks fell, but eventually we rallied and fought them off. Town was saved, and I went back to Connie's beer. Uh, maybe don't mention the beer. . . Ooga! 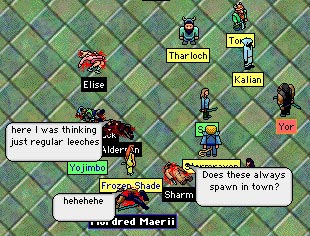 Posted by Para at 07:25 AM
Clan Hunter's Newcomer's Guide

Clan Hunter has a Newcomer's Guide that is valuable for those newly exiled. 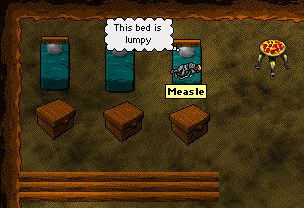 New exile Measle has started a new journal. The first entries cover an undine invasion, a field trip with the University of Puddleby to Hatred Hollow run by Jo Ma'ril, and the purchase of a place to live from Zynx. 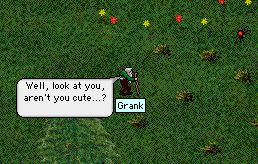 I saw something north of the Orchard that was new to me, and I thought I would share a couple of sketches even though this may be "old news" to many exiles.

I was hurrying north to see if I could rescue a fallen Klio just inside the entrance to NWF. Just as I emerged from the Orchard, I saw Grank shuffling along, but what was unusual (to me) was that he was also talking . . . to a rat! He was just in the act of saying, "Well, hello there . . . aren't you cute?" to a rat as I appeared in the snell.

I dashed past him and went on into NWF, found Klio and was able to raise her. She needed a quick break before hunting further, so we went back south into the snell between NWF and the Orchard. Grank was still shuffling about. And as you can see from these sketches, still talking to critters. Although I must add that he greeted me and Klio very politely as well. :-)

What an odd old fellow Grank is. Has anyone else seen him do this before? 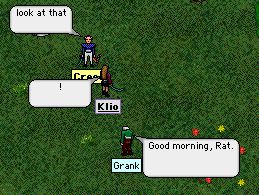 In other news, Clan Destine is proud to report that our Halfling healer, brewer and zuer extraordinaire, Sim, has passed his 3rd Circle test! Congratulations, Sim!

Also, my friend Antha, a sylvan healer who is fairly new to the lands, recently passed her 2nd circle healer test. She is not a member of Clan Destine, but we congratulate her as well.

We were never here!

Posted by Para at 07:48 PM
Raul in South Forest

Raul reports on trips to South Forest, Zerkwood, and Kitty Beach in his latest journal entry.

This is the 2,000th entry on TMN. Thanks for reading for over three years (OOC) now.

As Himitsu pointed out recently at Eyes of Puddleby, Sweet Azember upstairs at the bakery is collecting materials for some sort of "renovated shrine."

Posted by Para at 05:56 PM
Azriel Catches Up

Azriel has recently posted some entries on the last few chaos storms in his journal.

Fleming has filed a report on the ELF Blog about the most recent ELF meeting. Among other topics, members discussed how best to publish Dun'ilsar standings.

Well before TMN was even around, The Puddleby Post published stories and articles about life in exile. The Puddleby Post has not been updated in quite some time, but it is still accessible and remains a valuable resource for the history of Puddleby.

You can read more about the development of Stylunk in "Introducing Stylunk" on the Clan Lord Sentinel.

Stylunk has been added to the list of key applications in the right-hand column.

J'nder recently passed the seventh-level healer's test. She has sent to TMN an image of the eighth-level test.

(Spoiler warning. If you want to see the image, look below.)

Raul the Fen has created a new journal, Raul's Hunt.

In his most recent journal entry, he reports on pants in town and an invasion from the north.

Raul's journal has been added to the list of journals on the right-hand column.

I have posted two updates to my notes. 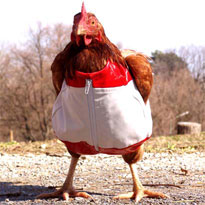 I'm not running for sheriff, and I won the pre-election opinion poll in the votey building thingy. Chef Haricot did a Koppi message to mock me. I believe this is the reason I won this poll.

Chaos Storm #393 has swept the Lok'Groton island chain. Please post any changes you have observed and wish to share with others in the comments. If you don't want to read possible spoilers, please do not read the comments.

Posted by Kiriel at 11:41 AM
Ansset Promoted

Ansset has been promoted to the position of Full Mystic. You can read more about this news in Lundar's most recent post to the ELF Blog.

Afton and Lundar have posted the minutes from the last two ELF meetings.

Topics of discussion ranged from the new availability of armor to the new Ranger class. The most recent meeting was followed by a hunt on Melabrion's Island.

Merlisk sent this image of a recent chicken invasion to TMN. Merlisk notes, "On behalf of other exiles, I want to apologize if this was a Super Chicken family reunion."

Posted by Para at 05:04 AM
Stone Cold Thoomline

Sativa sent the following picture and comment to TMN:

An impressive line to say the least!