Measle has become a squire. Read more about it in his most recent journal entry.

Posted by Para at 07:24 AM
Deathtrap Noids

In his most recent journal entry, Azriel reports on the dangerous new cavern known as Deathtrap Noids.

Azriel also reports on expeditions to Kismia's Island, the Foothills, and a recent FMOCR, as well as his thoughts on farming Sun-zu.

Chaos Storm #426 has swept the Lok'Groton island chain. Please post any changes you have observed and wish to share with others in the comments. If you don't want to read possible spoilers, please do not read the comments. 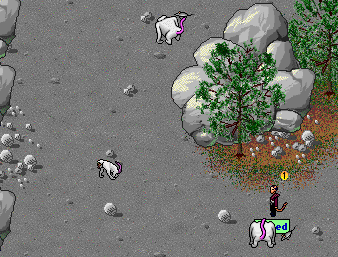 I have a couple of news reports that I just haven't had time to send you until now. None of these are particularly earth-shattering, but some of your readers may find them interesting or entertaining.

On a recent MI hunt, my clansister Sian and I saw something neither of us had seen before: Baby Wendecka! I managed to quickly sketch one of them before running to join the rest of the group. We actually saw three or four during that hunt, and I saw another Baby on another hunt soon after. But I've never seen them before that day or since.

I'm also attaching a sketch I made near the Camp Dred portal. As you can see, a group of us were preparing to enter the pf to Foothills. But I was distracted by the interesting site of a pinch of catsbane sitting in a tree. This catsbane may or may not be the same one that was spotted sitting on some rocks inside Camp Dred a couple of weeks ago. Its behavior certainly is odd! No one seems to be able to pick it upit just sits there out of reach and taunts us!

Last but not least, I thought I'd thank Panos on behalf of my friend Antha for taking her and Finegas on a long mosey recently. It was very kind of him to shepherd two younger exiles through some very difficult areas so they could gain some experience. Among other places, they went to Crawler's Revenge and then as you can seethe tah'xis cave (spelling?). Antha and Finegas both managed to tag this Blind Amphibia and gain a vanq when it succumbed to all of our blades (mostly Panos and Finegas' blades!).

Live from somewhere in Puddleby,
-Creed of Clan Destine 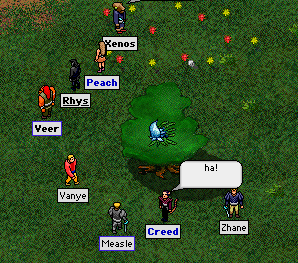 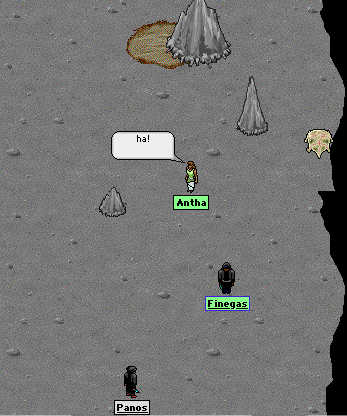 Posted by Para at 09:04 AM
Pitch Assault Group Needs Recruits

Due to the ever-changing cycle of life, the Pitch Assault Group needs more members. Please see The Sentinel for more details. 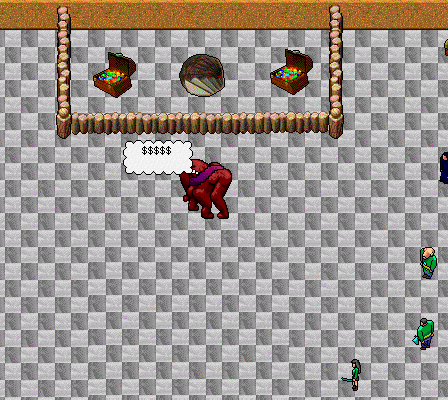 Recently I emerged from the library, and things were very quiet in Puddleby. All the exiles around were off in various places hunting, so I was alone in town. At least, I thought I was. An Orga Frellock decided to take advantage of the situation, and I spied him sneaking into town and looking around! I followed him around into many places, including our bank, where he seemed to be especially interested. Fortunately he didn't see me, and I managed to make this sketch.

What could the Orga be up to? What's their interest in our bank? Where did this Frellock come from? This is a most disturbing development indeed.

Posted by Para at 08:52 AM
Destine Invades MI

"We Were Never Here!": the echoes faded softly like the white sand on the beaches of Melabrion's Island. The sand and rock now stained red with the blood of young sasquatch, with numbers low and power lacking, we trio of explorers were left with one option, the mind. With sweat-beading-destine-tactics the healers formed rod-bricks while my bloodblade proved sufficient to vanquish the SAS before they could make us fall. With the sun setting and temperature dropping, we returned to Puddle Isle with our coin purses a little heavier and with the knowledge that MI was safe once more. This is what our time has rewarded us. To believe that we once ran at the sight of great vermine . . .

We now stand proudly before the young sasquatch, blades sharpened and cads glowing . . .

Farhope and the Winds of Dawn clan are organizing a tenth edition of the Spring Farms Cleaning Hunt.

Says Farhope: "It's time to show again to the farmers that we support them . . . and to the vermines that we will kill them all when they dare to invade our farms."

Hail Para! I was sitting on this, but your recent plea for news has touched me. Farhope was expressing concern that with the disappearance of most of the regular spores, that beer bread would become more expensive than iron metal. We were tipped off that mutated mushrooms sometimes yield regular spores, so we checked the town mushroom. Lo and behold, bump the 'shroom and out pop non-mutated spores! We should rename it Hoggle Mushroom, in honor of our anonymous tipper.

Just writing in to let you all know I've returned from my extended studies. I focused mainly on Puddleby history and poetry during said studies, and am very glad to be fighting again, as poetry is boring.

It's good to see everyone again. Cena and I had an especially tear-jerking reunion (see picture). Shortly after re-meeting each other, we made a short trip off-island. We met some pirate friends on Fire Island, and then rested a bit on Centaur's Island.

I hope to be meeting up with the rest of my friends, and peace-making with Orga again very soon. 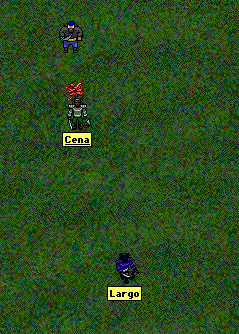 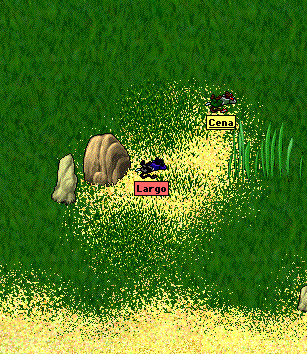 I haven't posted any news in a while because I haven't received any submissions in quite some time. I hear there is some sort of new Noids cave, but no reports have made it to TMN . . .

Posted by Para at 03:23 AM
The Wrath of Zynx's One Good Idea

The last two weeks saw the New Year's celebrations, in the form of a Frivolous Friday, to close out the Bawkmas season, which was loads of fun. During the celebrations we had loads of fun, being allowed to be any critter we wanted for a few hours. There was a great battle in Town Center, in which we fought some re-creations of my ideas. My One Good Idea held out for a long time, killing most it came across in one hit. Alas, it was eventually slain.

I passed the third-circle test only a few days ago and I am now trying to qualify for gossamer. It is a boring and tedious exercise, let me tell you. While working on my gossamer qualification in the Vermine Tree, I met an unusually large and diverse swarm of vermines. They included many GV, about a dozen DV, a couple of Dark Vermine (as you can see from when I had nearly cleared the Vermine Tree) and even one solitary Demonic Vermine. Man it was tough, but I managed to clear it with much effort. I very nearly fell several times; thank the Gods for Troilus.

Posted by Para at 04:47 AM
Booty and Piracy Explained

Ahoy me hearties - report to the Captain . . . Cap'n Stinkfist teaches "Bootyology and Piracy" this coming Sunday at 11 AM PST.

Posted by Para at 04:20 AM
Yor Grunts Happily in the Abyss

In his latest journal entry, Azriel reports on Tremolite and Judder, Warlocks in the Orga Camp, a trip to the Abyss, and a trip to the Slate Caves.

Chaos Storm #424 has swept the Lok'Groton island chain. Please post any changes you have observed and wish to share with others in the comments. If you don't want to read possible spoilers, please do not read the comments. 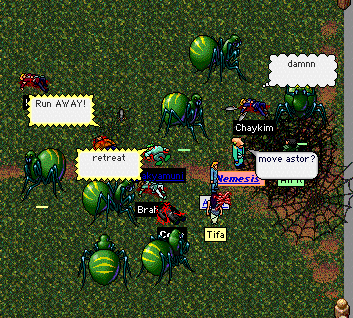 Hey Para. Well, the noids are back after their holiday break, and here's a picture I took of the action.

Posted by Para at 04:30 AM
Field Trip to the Valley 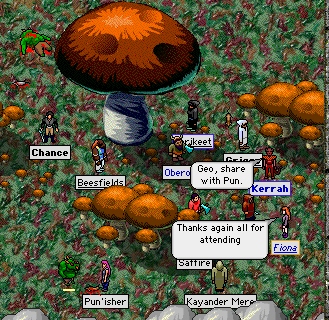 Today (Sunday, January 8 at 11 AM PST, OOC) I had the pleasure of attending Professor Kerrah's lecture entitled "Suffering From Chronic Fur Loss? Get the Skea lowdown from an expert." The lecture was extremely informative, and led to a field trip to the Valley--a place where many of the younger exiles attending had never been.

Everyone agreed that they learned a lot from Kerrah, and everyone also made many coins on the Valley hunt. I would like to thank Kerrah for the class, and also thank Fiona as university dean for organizing the adventure. Attached is a photo of the class participants gathered by the shroom by the Valley entrance, ready to plunge in to the unknown!

Cheers to all,
-Chance

I would like to report that a trip to Lake Leonin and the Orga lands beyond there (beyond the waterfall in the slime cave near South Pass) is being organized for (tentatively) Saturday, January 21st, sometime between 4 and 7 PM PST (7 and 10pm EST).

We need at least eight good healers and about eight fighters. More details on this expedition can found on the Sentinel.

To you folks out there, please feel free to join us. Although eight and eight are the minimum required, more are welcome to join us.

Posted by Para at 10:19 AM
Sasquatch at the Coliseum 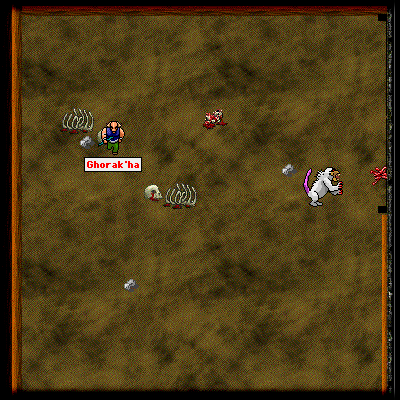 Hi. I fell in the Coliseum, and there was a Sasquatch in the fallen room! We attacked it, and it was soo hard to hit, but I managed to hit it anyway. Skywalker did most of the hits, and we had a few healers helping. Calmcacil wasn't healing very much; he was attacking the Sasquatch and hit it a few times! At the end, Calmcacil chained it. I don't know what he did with it, but he disappeared and appeared again with a vermine on his chain instead of the Sasquatch. Well, it was fun killing it! 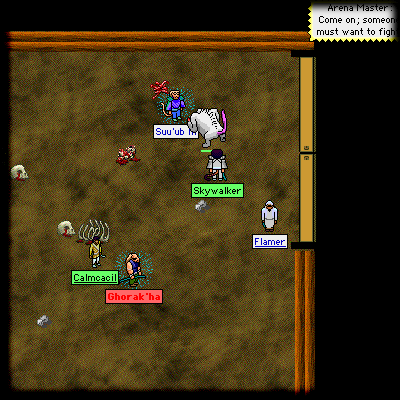 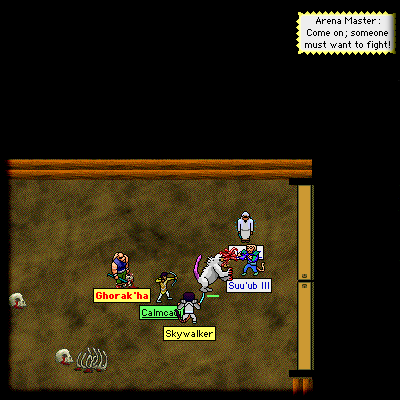 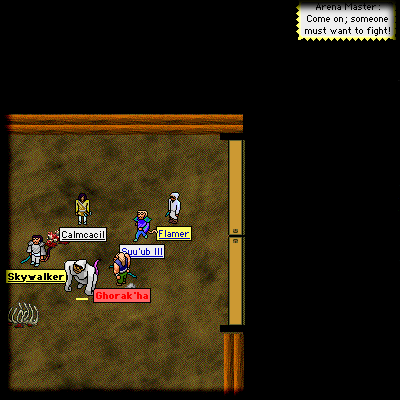 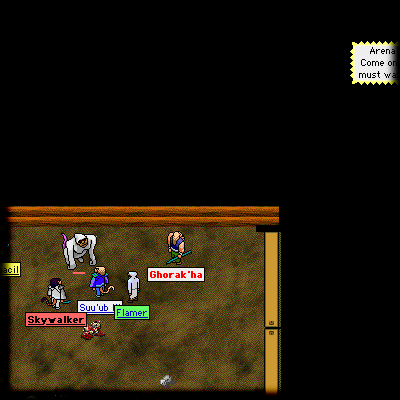 Posted by Para at 06:56 AM
Learning About Plants

ELF has been studying the plant life of Gungla Island. Read more about it in Fleming's recent report on the ELF Blog.

Suffering From Chronic Fur Loss? Get the Skea lowdown from an expert . . . Professor Kerrah lectures and leads a field trip Sunday, January 8 at 11 AM PST (OOC).