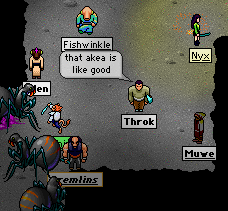 Eden has updated her journal, The Warrior Thooming, with some new entries:

The Great Feast of Tssrin

Posted by Para at 09:02 AM
Harbingers 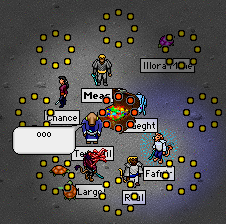 More about the Harbingers:

Measle has a report in his most recent journal entry.

There's a discussion thread on the Harbingers on the Clan Lord Sentinel.

Posted by Para at 04:49 PM
"The Halfling" and a Call for Phantasm Experts 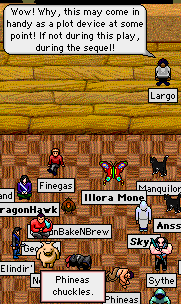 Measle reports in his journal on the Puddleby Players' presentation of "The Halfling."

Measle reports to TMN: "Also, I'd like to send out a call to any phantasm experts to be involved in the Puddleby Players. Any applicants would need to be able to rehearse weekly in the West End Theatre on Thursdays at 7PM PST for about an hour each time. We'd love to add a special effects wizard to our troupe."

I am happy to announce that the fruits of my labor during my extended study break are now ready to be picked!

Yes, the Laughing Academy scroll is up and running.

It can be found at

On our scroll, guests will find:
* the LA Inquirer: our award winning mustard journalism rag
* our sketches
* our graffiti scrol,
* bios, tips, and a calendar

It's not perfect, but if I waited until it was, the scroll would never be announced!

Calling all Laughing Academy members (and former members and a Snow Lemming), sunstone me when I am out of the library so I can send your "Magic Pen" information for the scroll to your enchanted mailbox.

Posted by Para at 03:59 PM
Extended Tsrrin and Mysterious Harbingers

Chance and I would like to share some sketches of some of the recent strange happenings in and around Puddleby.

Chance was part of the battle in Trooltown recently, and was able to make a sketches of the "Terror'kin," which also was apparently one of the "harbingers" that have been appearing one by one. I did not record any message, if there was one.

I was there for the Ona Chigger invasion, and once again I was able to be present at the killing of the herald, which I did sketch. This time I also was able to record the herald's message of impending distress.

I'm sure everyone has noticed that costumes and pumpkins have remained around long after Tsrrin would normally be over.

It was fun for about 8.2 seconds, but we found that when noids attacked, it was hard to tell friendlies apart from enemies, and the rescuers fell.

Unfortunately, I lay fallen for quite some time during what turned out to be a Scavenger Bird invasion and the third harbinger. I have heard there was also a Starbuck invasion, but both Chance and I were in the library during that time.

However, Chance did play a small part at the end of the Tor invasion. It appears this was the fifth harbinger. She sketched the fall of the Tor herald, and recorded its message. We all seem to still be awaiting the final message or outcome of these harbingers . . . of course, if anyone has more information, that would be welcome.

Two other items that may or may not be related. Recently Chance joined Drablak and several others in an attempt to find the entrance to Lugubrion's demesne. At one point while exploring in the marsh, the group approached the Marsh Hermit's hut. They were not able to go inside; instead the Hermit greeted them at the door, actually stepping outside and making one of his usual odd comments.

Later, this group traveled all the way down into the depths of the Jade Noids Lair, entering the second room and finding a new entry apparently recently blasted into a third, deeper chamber. This chamber held Jade, Azurite, and Pitch Noids and a couple of odd features, including an underground river that appeared to be blocked where it should exit into the chamber. Lugubrion seemed to be nearby but still could not be located. I understand that some of the group, including Drablak and Phroon, eventually found yet another entry in the marsh, but Chance was not able to follow them into it and so her part in this quest was ended.

Just for fun, I want to add one silly sketch. Chance, Maximum, Pun'isher, and some others went to LP to hunt. As there were numerous Swamp Ferals and CMRs there, Pun'isher decided to put down some zu. Chance and Maximus just had to tease Pun'isher about putting down enough zu to hold back an army of ferals, but as usual, she was ready with a comeback.

I hope everyone enjoys these recent reports. 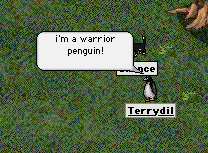 I'm sending along several images of Tsrrin fun. It sure was an eventful Feast this year!

I'd also like to congratulate Peril for passing the third-level fighter test. 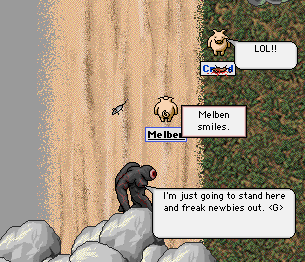 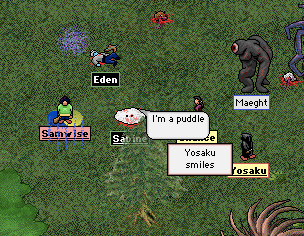 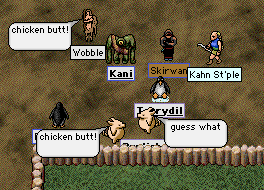 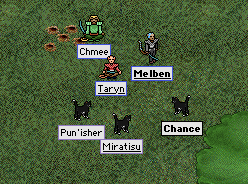 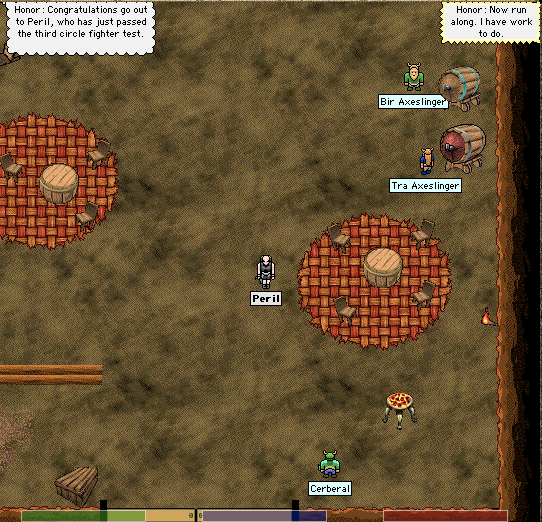 Posted by Para at 07:26 PM
Feast: Orga Loathings in Town 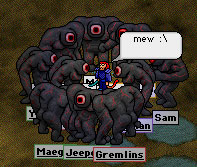 I thought I'd send some pictures about the Orga Loathings in town. It's that time of year, you know!

The first image is of the Orga Loathing huddle; notice how they've trapped poor Revlis. 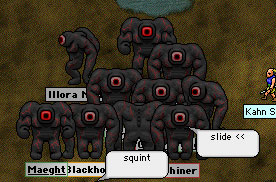 Here is their effort to make a pyramid. Almost as good as trying to make a fighter circle. 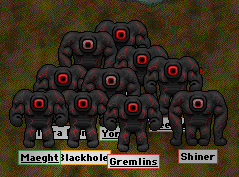 At last, they got it right! 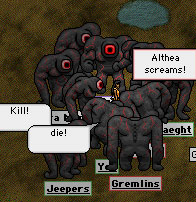 They circled Althea as she came out of the library! At first she screamed, and sadly this is where the camera broke down, but Althea was rather effective in defeating many of the foes.

(This image submitted by an anonymous exile.)

Your intrepid Thoom reporter came out of the library recently to find an invasion in full force. A Baby Wendecka had wandered into town only to be killed by a cruel and heartless exile.* The pass-dwellers took their revenge and invaded!

Exiles battled Gloaming, Twilight, Night Wendecka, Day Wendecka, and silverbacks of various stripes through the farms and the fields, pushing them slowly back to the forest and finally the passes.

Awaiting us in the GMV was the Furious. Mother. Wendecka.

She unleashed her wrath on the exiles who charged into the greymyr area. With cries of rage, she dropped hapless fighters and healers in just a few blows. In spite of a solid Thoom presence, it was rough going.

Numerous sorties were made against her to little avail. Blows were landed here and there, but by and large, she held the upper hand.

The Furious Mama does a victory dance!

We tried to talk to her.

We tried some alternate plans.

Kani gives it his best shot. She wasn't receptive.

Strategic falling to try to reason with her.

It only angered her more.

We finally realized we couldn't calm her down. Mephisto played some music for her, which seemed to calm her some, and exiles put her down.

After many hours of battle and attempts at negotiation, exiles healed the fallen and headed home. Farewell to Mama and farewell to Baby Ook.

*The exile in question, a certain sylvan fighter, was heard complaining that she got baby munkie brains on her dress.

I have a couple of reports for you! First and foremost, let us all congratulate Antha for passing the fourth-circle healer test.

Second, as we all know, the feast of Tsirrin is upon us. I took part in a Valley hunt a day or two ago, and as our group gathered by the usual mushroom landmark, Leinis happened to run into a pony wandering in the brambles. This pony was apparently a witch or wizard in disguise, for it offered all of us a costume like the one it was wearing.

We commenced to have a Pony Valley Hunt, which I found extremely awesome (heh). Even when the hunt went south, we were chained back to town in pony form. And when raised, we were able to return to the Valley for revenge still in the form of ponies.

My third report is of the recent large invasion of Puddleby by wendies of all shapes, sizes and descriptions. I made many sketches, but I am only sending a few representations to TMN. That's because it seems like almost every exile in the lands took part in the fighting at some point as it raged all over town, south town, east town, the east field and farms, East Forest, and throughout the passes.

Finally, we encountered a Furious Mother Wendecka in the passages leading to the Greymyr Village. She was one of the strongest wendies I've ever seen, if not THE strongest. It seems that this whole invasion may have started because an exile killed a baby wendy near town; in fact, there were numerous babies sighted wandering around in town, the east fields and east forest. The FMW bellowed and growled constantly, and Drathos, who was able to understand her to some extent, translated that she was furious over the death of her baby.

After a long battle, some exiles actually began to question whether we shouldn't leave her alone. But in the end, all of the strongest fighters and healers that could be gathered surrounded the Furious Mother and wore her down. She was defeated in the end, and the remaining wendies were mopped up by the tired exiles.

Although exhausted, many exiles were in the mood to celebrate after this great victory. Soon, several of those gathered in town formed a thoomline. It turned into quite an impressive thoomline and eventually a thoom pyramid! The gods were pleased, it seemed, as several exiles began to sparkle and glow, but to keep us in our places, we were zapped by divine fire that caused many exiles to fall. They were quickly raised, but the thoomline dispersed and another day of battle was over.

Measle reports to TMN of an upcoming production by the Puddleby Players:

Details and discussion on the Clan Lord Sentinel.

Here is a pic I took.