ThoomCare Media Network
TMN: Thoom News You Can Use
Book 3 and Sarra

Cheers, Para! It's me again. I thought I'd send a quick report of another successful visit to Trillbane's "Book 3." This OWE-and-guests trip started with a relatively easy run to Book 3 so that PureHero and ShadowSky could continue their PF training.

The group then decided to go to Sarra for a change of scenery. It was a very interesting and challenging trip with ups and downs that included vanquishing a very strange pair of Angry Mother Sasquatches. As you can see, they appeared to be connected, whether as Siamese twins or just reaaallly close friends we couldn't tell.

Of course, a couple of exiles had their opinions to offer . . .

I've been away for a while, but I made it back in time for the Feast.

Chaos Storm #517 has swept the Lok'Groton island chain. Please post any changes you have observed and wish to share with others in the comments. If you don't want to read possible spoilers, please do not read the comments.

I have a couple of news items to report.

One is that another group of exiles recently made a trip to "book 3," or "The Tao of Trillbane," to continue their studies of pathfinding. In the attached sketch, you can see Omega beginning his latest studies as I and several other exiles wait our turns. Omega instigated this trip, and I was very grateful to have the opportunity to further my PF studies.

Second, I am very happy to report that my dear friend Chance finally has become a Ranger! Her studies have been long and challenging, and she was very happy to be accepted by Garre Verminebane. Many exiles have helped Chance in her quest, including Yosaku, Yotaro, Klio, Shiner, Super Chicken, J'nder and Geotzou. She is especially grateful to Geotzou for taking so much time to help her finish the final two challenges (Night Wendies and PMRs).

Posted by Para at 04:53 AM
Twilight Arachne Temple

Today an informal hunting group traveled to the Twilight Arachne Temple on Metzetli. Led by the able Yor (N.O.T.O.R.I.O.U.S Y.O.R.), the group, a collective of Purple Haze and Yor and friends, explored several floors.

Outside the temple ruins, Yor leads us in

Thooms were an important part of this effort. Thooms Phroon, Xenos and myself along with the jolly Califas, beautiful Talin, and stoic Arbitur provided the healing for this group.

Thoom at work in the temple entrance

After a few hours, it was time to head home. All fallens were gathered and healed and we exited the temple.

Some exciting Thoom news. There is a new fish vendor in town named Brandon. He performs elaborate fish rituals (called "the Fish Parade") and then will sell you the fish for a very reasonable price.

I recommend that any Thoom in the lands seek out Brandon and ask to see the Fish Parade. His acrobatics will astound you.

Kerrah has updated her journal with reports on:

strength and studies
Kismia Island and the incursion there
sabotage 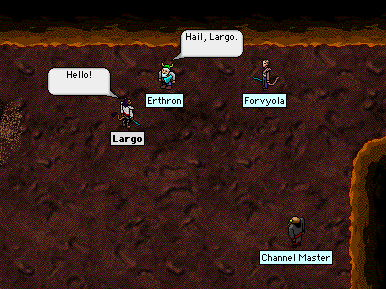 Largo reports on becoming a Champion in his most recent journal entry.

Posted by Para at 07:22 AM
Studying the Large Death Vermine

I wish to announce that I have completed my long studies of the Large Death Vermine! I began my basic studies in Autumn of 561 (March 2006) and completed the advanced studies on the afternoon of Soldi, day 34 of Summer, 568.

I wish to express my thanks to my hunting partners who offered me the opportunity to study these animals, and I offer my deepest thanks to Lorikeet, who devoted so much of her time and energy on those long hunts.

Posted by Para at 07:16 AM
Darkstones and the Sanctum Beneath Ash 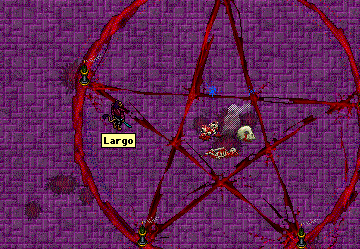 Largo has updated his journal with an entry on Darkstones and the sanctum beneath Ash Island.

MaryJane reports on the Clan Lord Sentinel that the the next (final?) incursion will occur in the northernmost GMV Snell on the night of Fordi, the 88th Day of Summer (OOC: Fri, 26 Oct 2007 11:51 am PDT)

Details and discussion on the Clan Lord Sentinel.

I do believe the attached sketches speak for themselves!

Posted by Para at 11:03 AM
New Paths and the Rainforest

Azriel has updated his journal with a report on pathfinding and exploring the Rainforest. 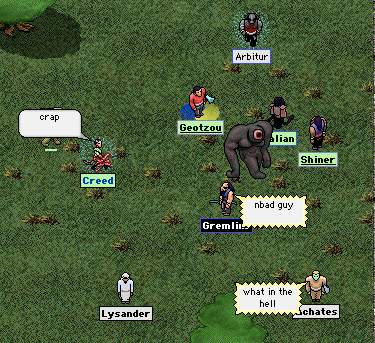 I don't believe anyone has reported on the recent appearance of an Orga Loathing in OC1. It was very startling to see such a high-level orga in a relatively "easy" area, and the first group of fighters who encountered it were startled, to say the least.

After a few moments of panic and attempts to S&P the beast, the exiles retreated and brought in reinforcements while Geotzou displayed his zu-planting skills. The zu proved useful when a large swarm of regular orga rushed in to rescue their companion. They were relatively easily defeated, and the exiles then concentrated on the Loathing.

With a strong group effort, the exiles brought the huge enemy down. We then celebrated with a well-deserved drink right there in OC1. Exiles win again! 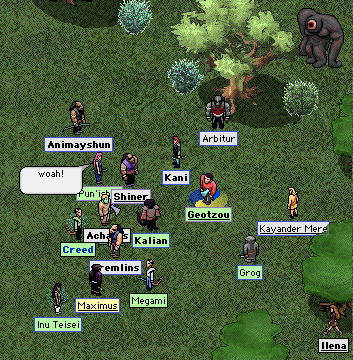 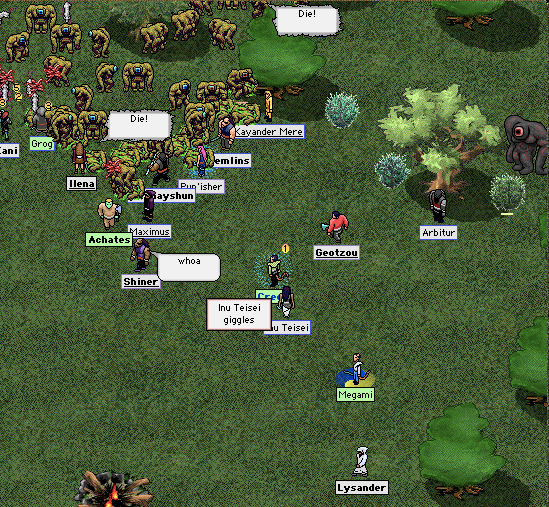 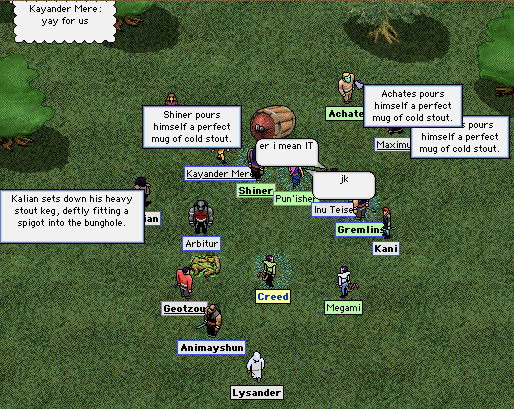 Posted by Para at 02:49 AM
Boo Boo Kitty Passes Fourth 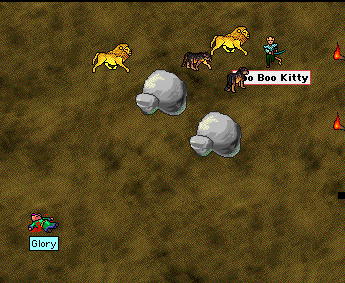 After several dozen tries, Boo Boo Kitty passed the test and is now a 4th circle healer. Here are some images of the glorious event.

Boo Boo Kitty dodged and weaved. Glory congratulated her but was kind of rude by shooing her off. I guess that's Glory's perogative . . . *pfft*. Later, BBK visited the 4th circle training area, where she has happily started her training with Virgil. 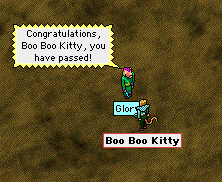 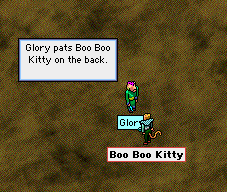 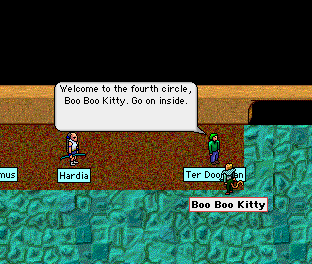 Posted by Para at 12:22 AM
Healer Shortage, Vermine/Darshak Attack, "Ook."

I have a few more submissions for TMN. Many interesting, funny and/or newsworthy events have taken place in our puddly little town over the past few days!

Lately there have been several times when healers have been very hard to come by. As you can see by one of my sketches, I was recently the only healer in the lands (except for Stora) for a little while one day. On another occasion, during a hunt at the noids cavern, we realized that we had all four available healers with us!

The brave exiles of Puddleby repelled an invasion a few days ago that began with rats and vermine and ended in a full-scale Darshak attack. I was able to make a few sketches during the vermine invasion, including a sketch of Phineas doing his usual brave deeds. I was too busy wielding moonstone and cad during the Darshak invasion to make any sketches, but it was an impressive defense effort, and of course, the exiles prevailed.

I have to tease my friend Chance just a little. She was fighting in the meshra cavern, and was much wounded by meshra, Lair Guardians, etc. . . . but when she fell, it was to a leech. A LEECH! Oh, the humanity . . .

And last but not least, I was hunting in the passes with Nyx and Bleign when we were felled by a large group of wendies and night wendies. Bleign fell in a different snell than Nyx and I, but after a few minutes, he suddenly appeareddragged over the snell boundary by a wendy. This was a most odd wendecka. It seemed to be more intelligent than its fellowsat least it seemed to be trying to communicate. It beat its chest several times and exclaimed "Ook!" as if trying to tell us something. 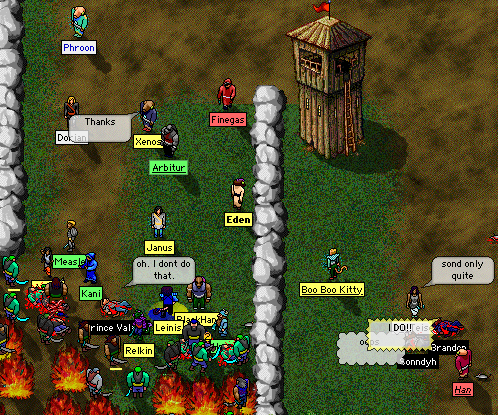 Eden has updated her journal with a report on a recent invasion by rats, vermine, and Darshak. 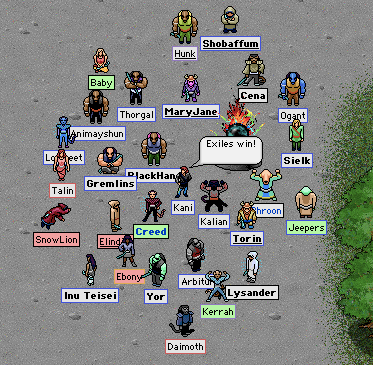 I wanted to share this sketch from the most recent ethereal incursion, which took place on KI. This is a bit late in coming, but I think it's still newsworthy becausethe exiles prevailed! You can see the kyeum glowing brightly next to Kani in this sketch.

Posted by Para at 08:28 AM
Master Hekus and MaryJane

Greetings Paramedic. I hope this note finds you Thoomy.

Two badly fallen were in town recently. Master Hekus came out of the healer hall exclaiming "what is this commotion?"

First, he looked at a perilously-near-death Kani and was nonplussed.

Then Hekus moved on to the real reason that brought him out of the healer hall.

Miss MaryJane had fallen and couldn't get up. Beer was involved. When healers tried to raise her, they got a mysterious message that "healing was blocked." Did a Bloodstone Ring eat her?

Not even a bloop.

He was finally able to raise her, but then he couldn't heal her whole. After some Merc Staff fiddling, he raised her. She was still unhealable.

And finally he got her to full. But he cautioned her to be careful until he could find out the problem.

Master Hekus had many fans among the healers in Town Square. Miss Boo Boo Kitty was on him like scales on a fish. Master Hekus, the kind Master he is, gave her his own special attention before leaving.

After the excitement, I had to leave to heal in the field. We Thoom are always in demand. But I understand Master Hekus came back and fixed the mystic.

Posted by Para at 11:16 PM
Indigo Falls in the Dark Temple 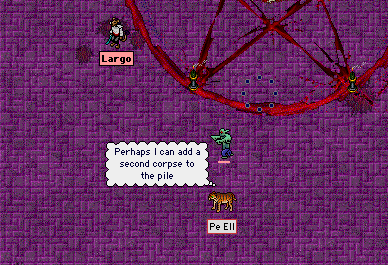 Fen Vice President Largo reports in his most recent journal entry on Indigo falling in the Dark Temple. 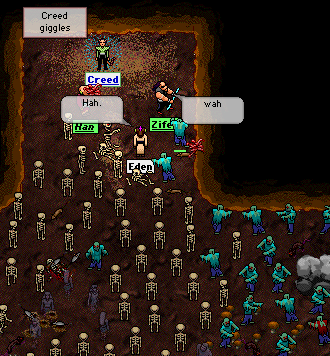 Eden has updated her journal, The Warrior Thooming, with some new entries: 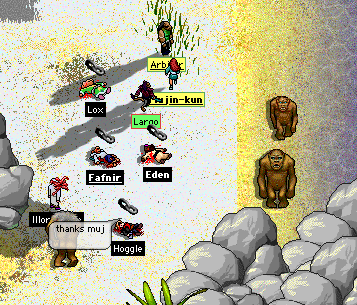 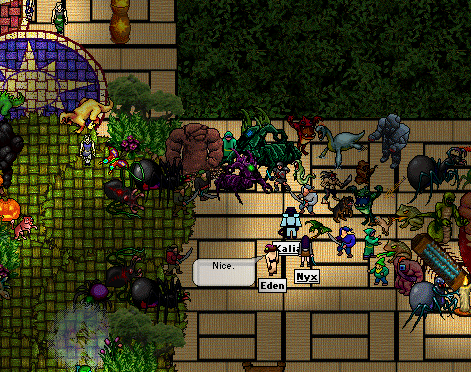 Chaos Storm #514 has swept the Lok'Groton island chain. Please post any changes you have observed and wish to share with others in the comments. If you don't want to read possible spoilers, please do not read the comments.