Yesterday I emerged from the library to hear that the Orga were in East Field in force. I hurried over to find exiles holding the bridge against the massed Orga ranks. 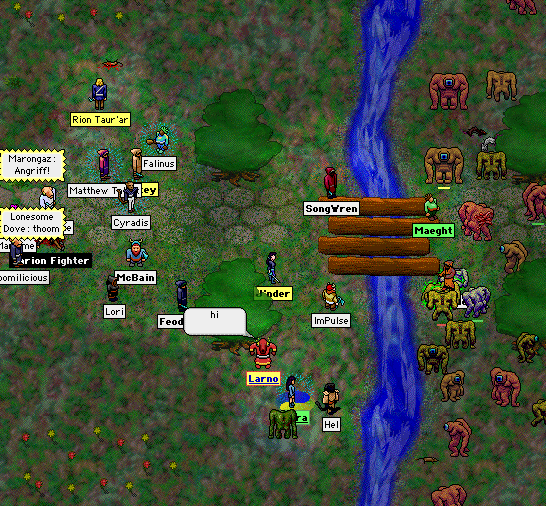 The Orga arrived in more and more strength, aided by an army of slimes! The exiles were forced to abandon East Field and defend Town Center. 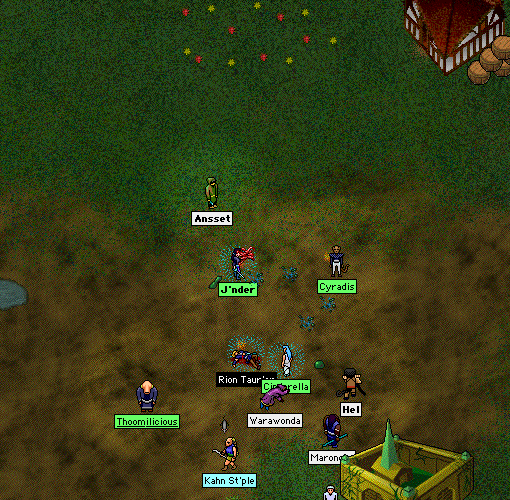 Eventually we beat them off only to find they had built Orga huts in East field. The huts could be attacked so we set about destroying them. 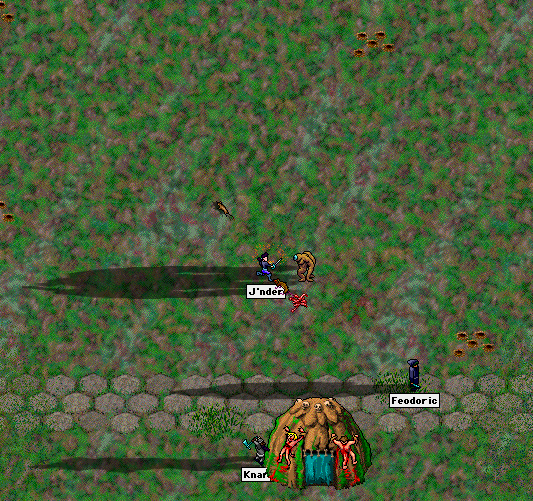 Some were invisible! And hit back! 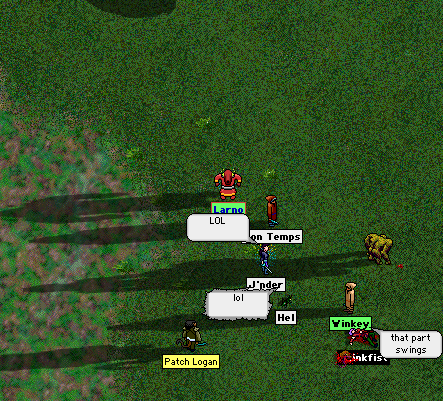 We eventually destroyed them. 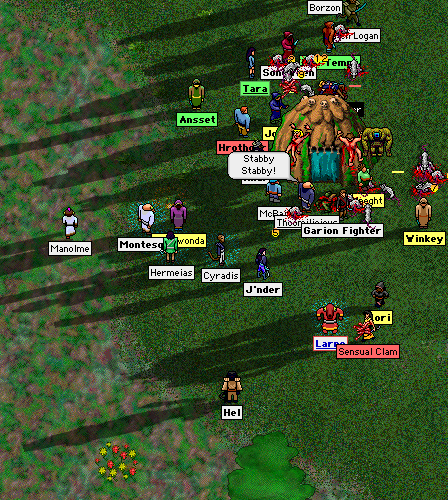 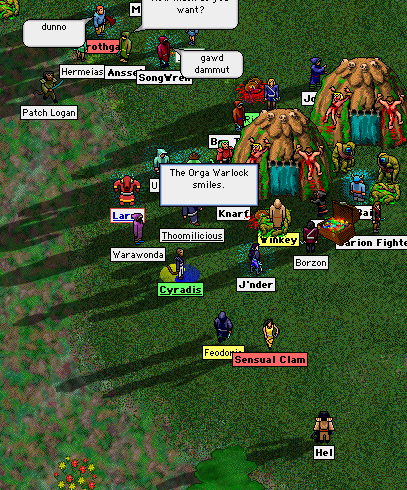 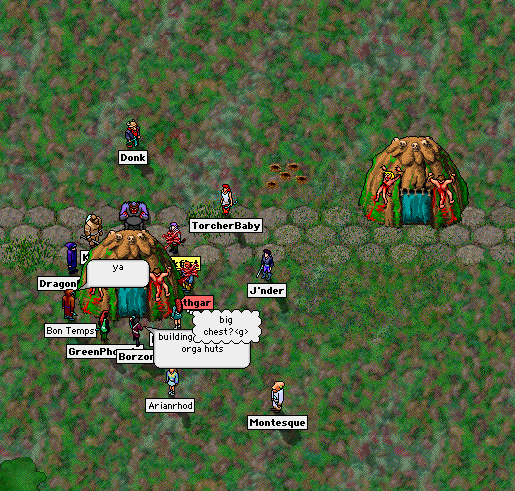 One exploded, with devastating results.

We then took the fight to the Orga in East Forest, only to run in to Orga we'd never seen before. These included the Orga Fierce--much stronger than a Hatred, and the Bam Bigfingers (looks like a Dred, but
much tougher). 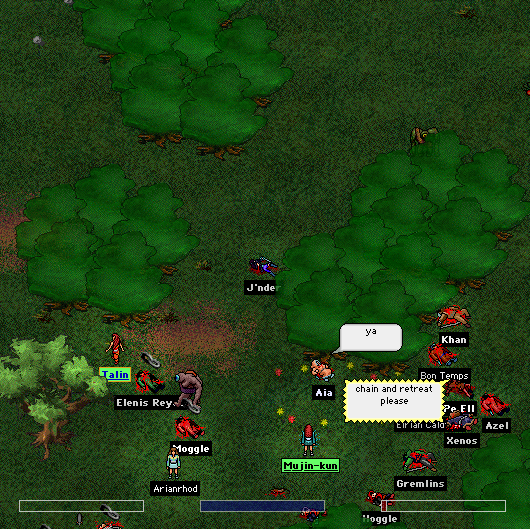 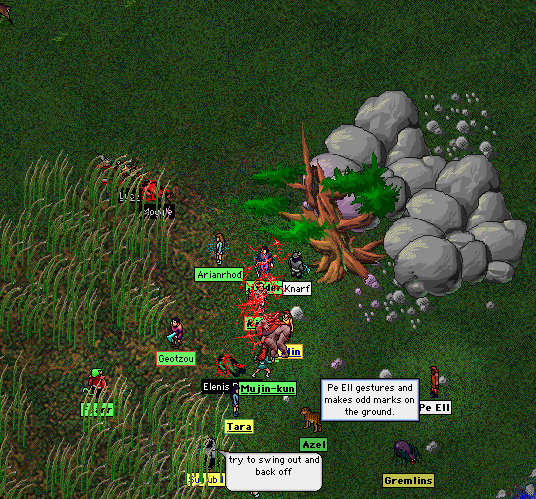 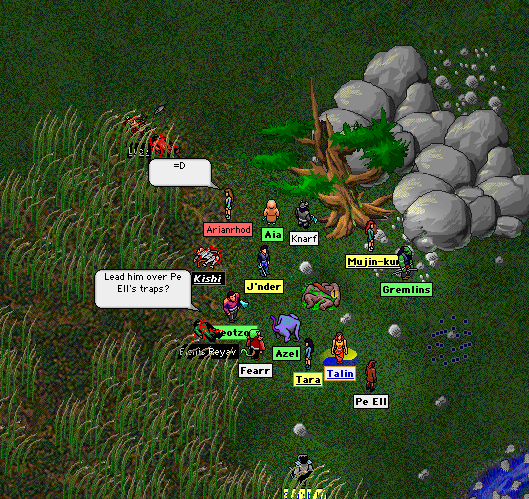 The Orga's leader, Bigeye Exilemushtargtar, was cornered at the University, and after a long battle, fell. 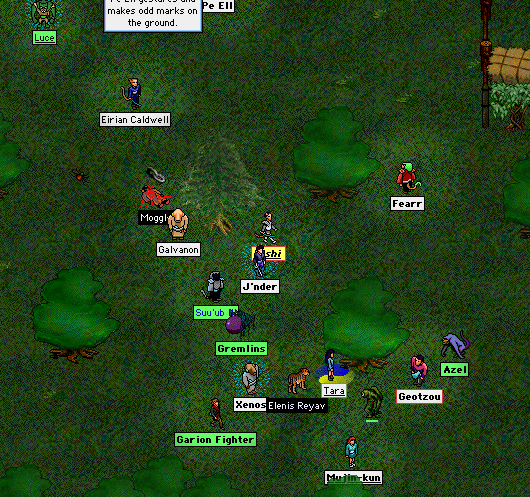 Discussion at the Clan Lord Sentinel.

Posted by Para at 09:13 AM
Trowl's First Task to Greatness 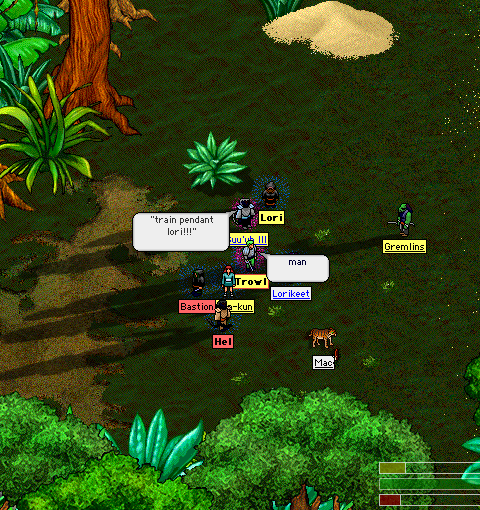 After all the talk about lack of new items here, I thought I'd send a little something your way.

But, being as boring as I am, I thought I'd rather just give a big thank you to everyone for helping me advance so quickly.

So, from the cackles of my heart: Thank you all you healers who have put up with my antics, healed me when I screwed up, and trained Horus when I forced you to.

And thank you, all you champions, for keeping all of the horrible, horrible creatures from eating my bone marrow.

And thank you, Mystics, for always being there with advice, especially you Kvynn, who always looks out for the newlings.

I guess the main reason I'm so thankful today is because today is a very special day for me. Today I accomplished the first of my 7 tasks to greatness. When I first came to the Lok'groton, the gap between myself and the rest of the players seemed insurmountable. I remember everyone telling me that no matter what, I would never be able to catch up.

After he issued a challenge to take me on in the arena, I, as any good pirate would do, went instead to the badlands. There, and only there, can two fighter truly match wits and brawn. After a few minutes of collecting an undead army, trapping Blindkan with them, deflecting his many shots for my head, and doling out damage as fast as I could, I finally defeated my worthy foe. 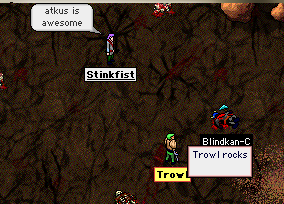 And again, thanks everyone who helped me with my goal.

(I took a stone of the whole thing, but it's full of gloating and mean words, so I'd rather not post it. If anyone wants it, PM me at the Sentinel.)

Posted by Para at 10:12 AM
Fearr Joins Neko No Kessha 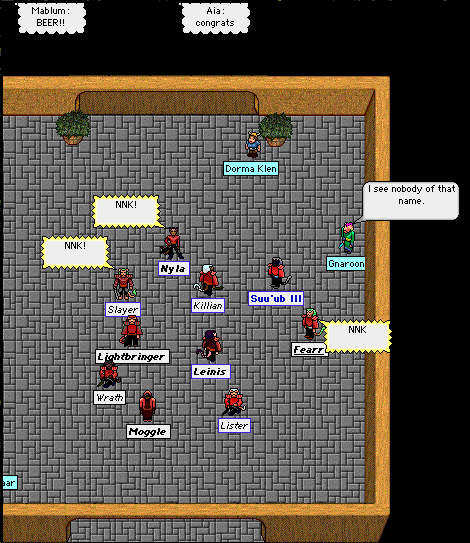 Neko No Kessha is proud to announce the induction of its latest fresh fuzz: Fearr! Fearr, a long time prospect of the clan, was unanimously voted in this Sunday, with a majority of the clan present to witness the event. Fearr will be the only active NNK Mystic in recent history, and we trust his mystical abilities will compliment the clan well.

So again, welcome to Neko No Kessha, Fearr! We're proud to have you wearing the red and black! 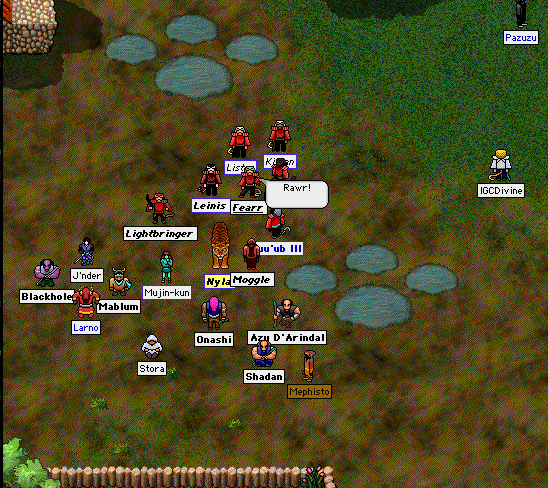 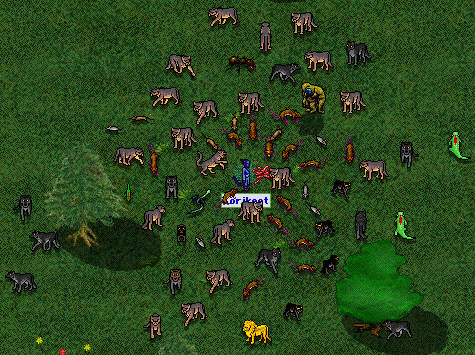 Sigh. So I was hunting in Northwest Forest, and it was rather busy. I showed my friends the safe cave, but I broke a couple of chains on the way, so I decided to go and fix my chains. Big mistake. As I crept south to the exit, a large number of creatures ran toward me and got me stuck. You see, Gaia doesn't think it's useful for healers to be able to get out anywhere they might get stuck. After the first creatures were successful, they called all their friends in to pile on. I didn't want to call a fighter to dig me out because then the hunters who were hunting there would have had nothing to hunt. So I told them to peel the creatures, and eventually they all disappeared. In this picture, you can see some of them were chasing a couple of healers who came to help. 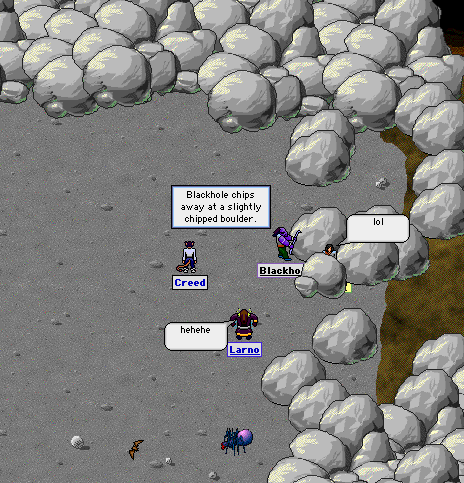 Creed here, with a couple of random news items for ThoomCare News!

The first item is just a little touch of humor. I was on a rescue mission in the foothills, and on the way out, my clanbrother Noivad had a very, VERY narrow escape! He was surrounded and trapped by the huge rocks that fell all around him, yet he was not killed -- thank the goddess!

Quite a close call.

I'd also like to congratulate my friend Antha for passing the 5th circle healer test. Antha reports that she was very pleasantly surprised to pass. She's now studying with Mistress Metta Sylpha. :-) 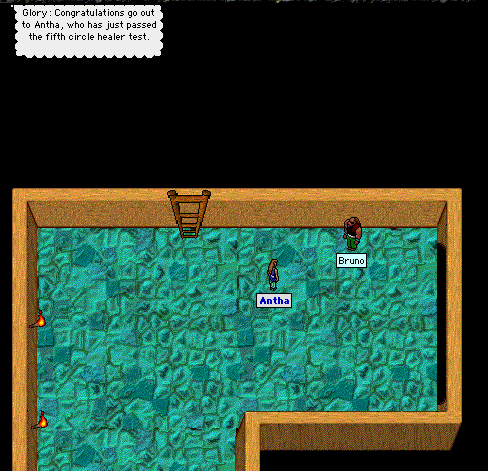 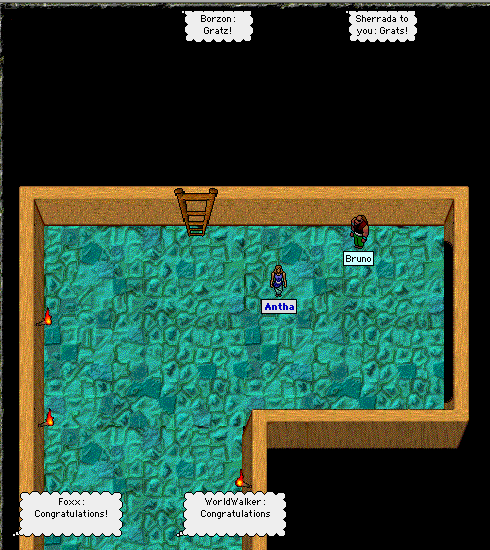 And speaking of Antha, you can see by one of the sunstone messages that a very special visitor was in the lands recently. That is ... WorldWalker! Yes, a name from many many years past showed up in the lands. Antha spoke to him for quite a while, but neglected to make a sketch! WorldWalker was very pleasant to talk to, and he wanted to hear all about the changes in the lands since he last visited.

That's all for now. Be well!
-Creed

Posted by Para at 11:57 AM
The Mystery of Master Mentus

What exactly are the benefits of training with Mentus?

Chaos Storm #663 has swept the Lok'Groton island chain. Please post any changes you have observed and wish to share with others in the comments. If you don't want to read possible spoilers, please do not read any further!

* Pebbles, in the temple, has been dismissed for gross incompetence. Luckily we were able to hire a replacement, her identical twin sister, also (confusingly) named Pebbles. Despite the apparent similarities, the new Pebbles is expected to be much more helpful than the old.
* Many minor bug fixes.
* No crashes in 551 days and counting.
* Youll have to explore to discover the rest of this Chaos Storms changes. Enjoy!

Posted by Para at 12:02 AM
Report on Tatterflesh from the Pirate Co. Science Labs

Arrr I did some secret Pirate Science and anchored Tatterflesh's souley remains to an undisclosed location with a darkstone ands left it thar ta hopefully rematerializeitate. Who's Tatterflesh ye may ask? This guy dead guy seen lastime on The Adventures of the Pirates of Lok'Groton and Friends

So after some time... and some more scientific application of various magics, ands a healthy amount of zu smoke, it appears, his soul has reformed, free of shak influence. His memory be hazy, and does not be recallin his original name but he be reasonably well mannered and friendly thus far. So friendly that I have changed my mind about makin him into a slave as admittedly originally planned. 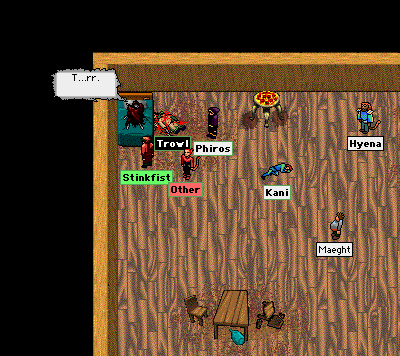 This breakthrough, the knowledge that possibly, through a combination of a wide array of magic, a powerful soul can be destroyed, anchored to rematerializeitate, be rid of their dark controlling chains and regain their free will. A very interesting prospect indeed. For if one can free a soul from tha shak, one could theoretically turn their undead army against them some day.

All Pirates are here by ordered to protect our new undead friend while he recovers, for once he be well, he can aid us against tha cult who stole his soul and free will.

This be a breakthrough that all learned citizens of Puddleby should help study, I call on tha help of tha University in this matter. For if this knowledge can truely be used for good, we must know more about it. Brutal and cunning citzens of Puddleby shoulds seek out any dark knowledge tomes or artifacts they can for study. Despose of those currently using them so they don't needs them anymore, so we can just haves.

P.S.
If he shows up and be hungry, point him to Trowl, or the bloodpool in the cemetery in NW town. Thanks yous.

Posted by Para at 04:39 AM
Estuary Story

I came late to Azel's Estuary Hunt, but was able to join partway through, as some of the exiles had left. We were searching for the reed cats that Azel is studying. Suddenly, things took a turn for the worst, and I had to chain the rest of our group members. Unfortunately, much of the grass in the Estuary is very heavy, and an exile cannot cross it. Also unfortunately, I didn't know exactly where we were, so I zigged instead of zagged and got stuck in a little itty bitty part of a snell, losing Hunk to a Hellebore on the way. While a rescue group was on the way, we were trying to see if I could pull one of the fallens and sneak out past the sortoise that was hanging around us when suddenly there was a spawn of 8 more. They look very pretty, but we weren't going anywhere. It looked like this: 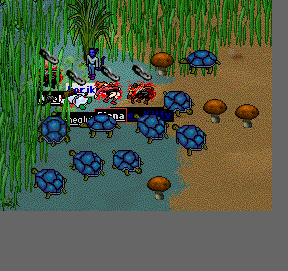 I do think the powers that be may have wanted me to rue the day I decided not get a pendant. Oh well. It was a tough rescue, but eventually the group was able to find us. Thanks to all of them. (I'm afraid to name names because I will no doubt leave one out.)