ThoomCare Media Network
TMN: Thoom News You Can Use
More on the Mad Mystics

It was a day like the day before and the before that day and so on . . .

Everything was normal, and the people were going on hunts or resting in town.

But then at the evening of that day, it happened. the town had a mystic invasion.

Eight mystics from every part of the island arrived, and we formed a strong group of mystics.

After some discussion about useless things, we headed to the QC to kill the Queen of the Myrms.

Of course, we didn't find the correct way within the first try, but anyway . . .

While everybody else prepared to rescue this group of strange exiles, we moved into the Hive and killed the first Noble Myrms. Lasties of those were booked to V'ree because he wanted to become more royalty.

Nobody expected it, but it happened: nearly all of us were alive when we met the Queen.

But we recognized very fast that without a healer, we would probably fail. So we ordered Omega to help us out. With his help and our brilliant boosts, we managed to vanquish, kill, dispatch, or slaughter that Queen of the Myrms.

Brilliant Mystic storm to the QC!

In keeping with ancient traditions as set down by Sutai, when mystics reached a critical mass today, we held a mad mystic hunt, and stormed the hive QC! 8 brave mystics joined in, with Omega coming along as independent and official observer. As you can see, a combination of excessive boosting and mind control baffled the poor queen, and we emerged victorious!

Chaos Storm #669 has swept the Lok'Groton island chain. Please post any changes you have observed and wish to share with others in the comments. If you don't want to read possible spoilers, please do not read any further!

* Ranger morphs and Champion petrification should now be back to normal.
* The gerbil responsible for distributing Arindal ranks was discovered to be facing the wrong way round in its cage, which had so upset it that it had silently failed to distribute any ranks at all during v666. The gerbil has been chastised and reorientated.
* Master Hekus cleaned his ears.
* No crashes in 593 days and counting.
* Youll have to explore to discover the rest of this Chaos Storms changes.

So, lots of folk told me it couldn't be done, but they were wrong. Recently, I passed my 5th Circle Healer test after first killing one of the noids. (I would have liked to kill all of them, but there's a silly time limit on the test, so had to be content with just one.)

This is the same method that I used for my previous circle tests, which was to kill at least 1 monster (for 2nd circle, it was all monsters). I'm including 3 drawings to illustrate the 3 main stages of this test-passing method, for 5th circle, for anyone else who would also like to try it.

1. Using the rocks, position yourself and the noids to attack only 1 noid & vice-versa: 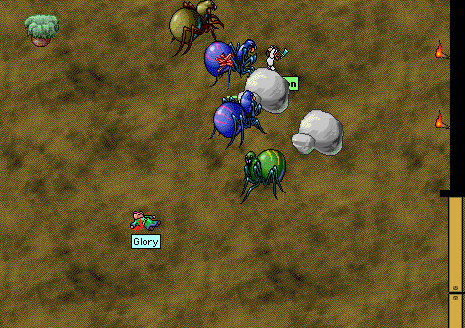 2. After killing the noid, start healing Glory (just ignore the attacks of the other noids): 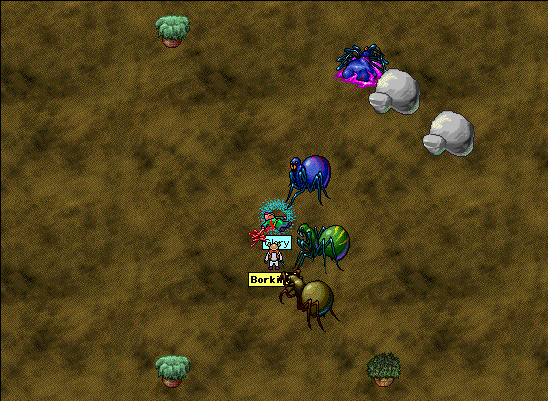 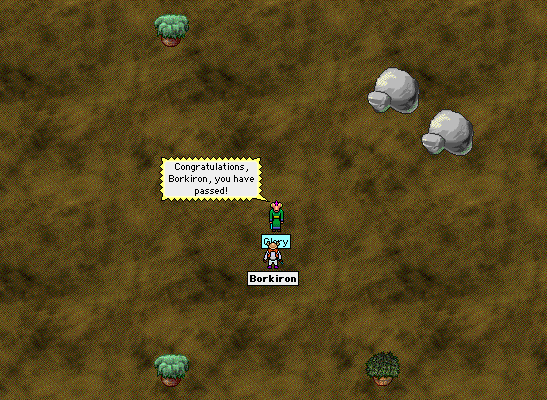 In case there are some who might doubt my drawings, I also made a visionstone, and submitted it to the Puddleby Visionstone Repository.

In closing, my message to everyone else is to believe in yourself and follow your dreams.

Posted by Para at 01:16 PM
Captain John, Darshak Pacifist and Some Impudent Birds 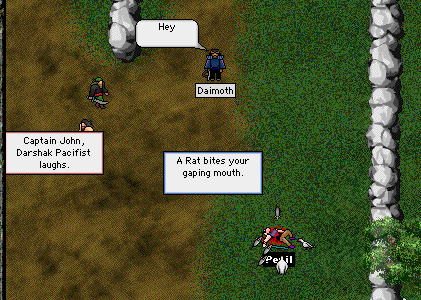 Peril here with some reporting from the most recent Darshak invasion. (There seems to be a lot of shak activity lately!)

As you can see, the invasion brought with it a new Darshak "leader," if in fact he was a leader . . . he styled himself "Captain John, Darshak Pacifist," but he certainly proved able to fight once he was surrounded in Town Center. Up until that point, he ran around laughing crazily (Har! Har!) and just sort of making a nuisance of himself. 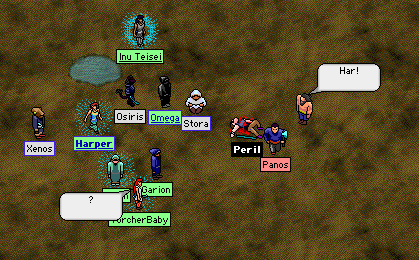 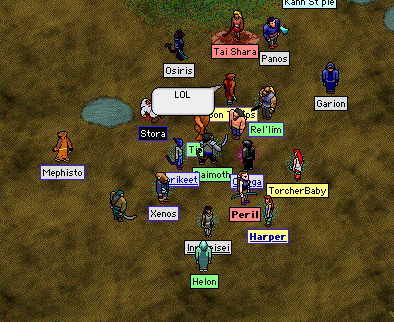 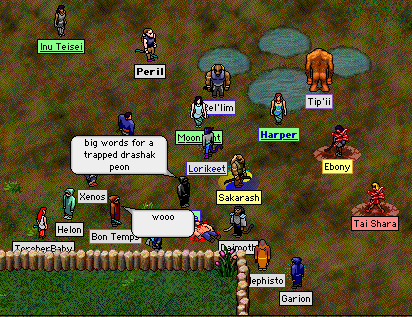 Another odd thing happened during the invasion. I fell at one point and lay alone for quite some time, with random darshak running to and fro. Then a Scavenger Bird flapped up to me and squawked something very strange.

I couldn't resist making a comment about it, and soon the bird and I got into a sort of conversation. Then a rat joined in. It was all very strange, but in spite of my terrible wounds, I managed to make a few sketches. 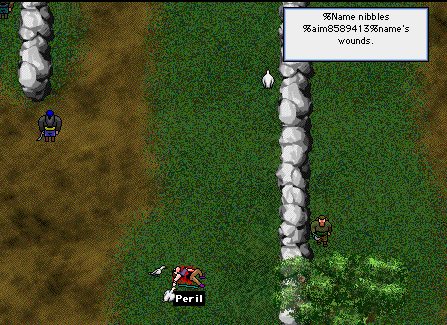 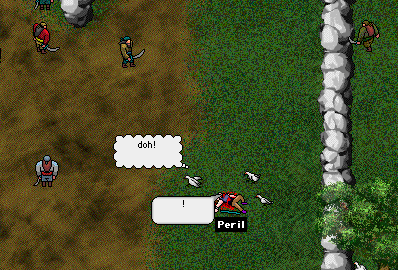 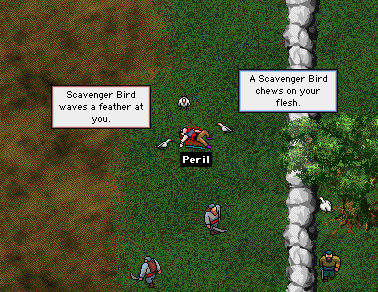 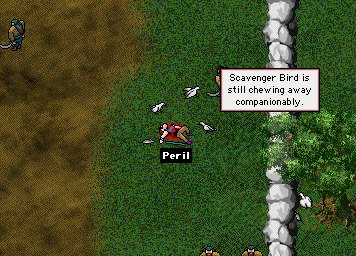 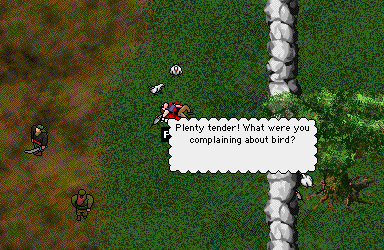 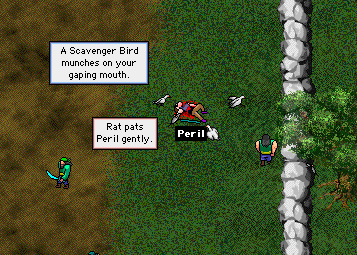 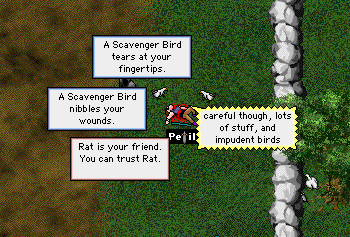 Posted by Para at 07:29 AM
Wangah's Drum Solo Gone Wrong 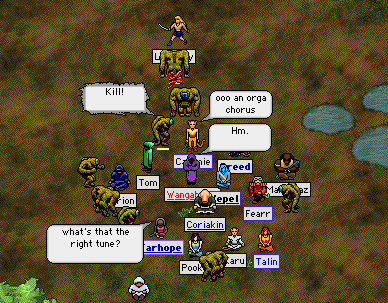 I have a small news report to offer you.

It has to do with everyone's favorite bard 'n' mystic, Wangah Rah. The other day during an impromptu concert in TC, Wangah was asked to play the orga drum as part of a trio. But he apparently played . . . the wrong drum? Wrong notes? Wrong song? As you can see, instead of playing music. he summoned a mini-orga-invasion. 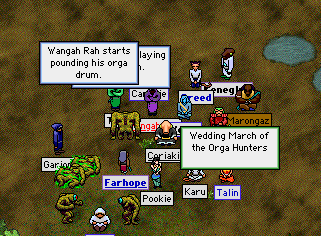 Luckily there were enough exiles in the audience to dispatch them quickly (or kill, vanq or slotter them...). 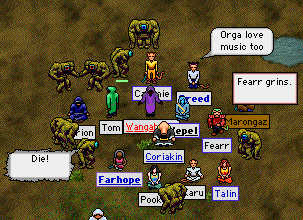 I know I said my next post would be Task 2, but it's not! Nope, instead I was on the exploration hunts for 2 different places this week!

The first one was boring old Abyss 3, which was crazy amazingly hard. The best part of that hunt was either the snowball fight in Abyss 2, or the indulstone actually working on me. But the second one, The newest area of the Estuary, is where the fun is.

Tip'ii, Lorikeet, Geraldus, Ravenstorm and I were heading to Estuary 1 for a quick jaunt, oh i forgot Shiner, in order for Trowl to finish his reedcat studies at a time where Azel couldn't join. I finished my studies after the second reedcat (the first one was ranger'd) and so I finished my cat studies! We continued onward throughout the Estuary. Tip'ii traded me a log for his roguewood club. We finally wound up heading to Brigid . . . and instead there was a bridge! 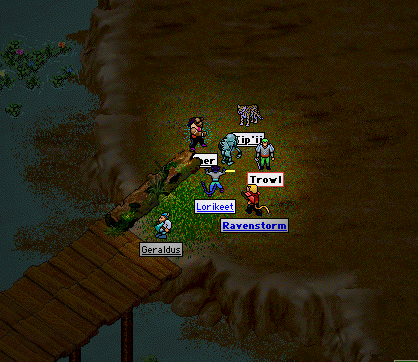 We crossed the bridge, expecting it to just be more estuary. It wasn't! As soon as Rave lured the northern border, we were attacked by Super Scavenger Birds and Glowing Blue Meshra! The Super Scavenger Bird almost wiped us out before we took it down, and we had to retreat across the bridge! We decided to call the vulture a Lowland Vulture, because of the cheap way that it tricked Ravenstorm into swinging out. 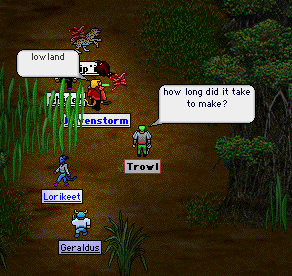 We then healed a bit, but before we were finished, a grey, streamlined meshra attacked! It was hard to hit, and it feralled like crazy! 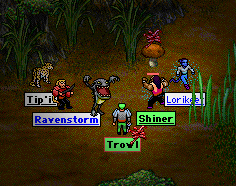 We killed it and named it a Flotsam Meshra, because of how its erratic motions reminded the sailors among us of the sea. We went back across the bridge and tried to take down the Glowing Blue Meshra. It hit like a girl, but it took a while to take down. 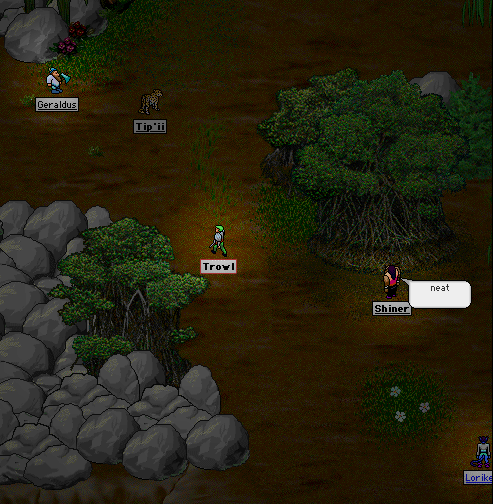 One thing we noticed about the new section of the Estuary was how many pretty swamp trees there were. They were shockingly pretty, and did a great job to conceal the grey Flotsam Meshra.

After a while, we encountered two of the Blue Meshra, as well as a swarm of other creatures. As we tried to kill the Spicy Mander, we noticed that the more we hurt it, the brighter blue it glowed. Not only that, but it was healing itself incredibly fast. We finally killed it, but it took a lot longer than your normal Spicy Mander. 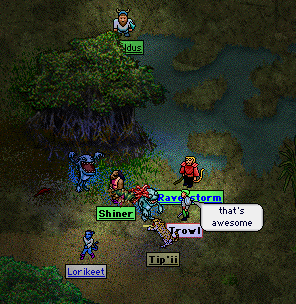 We turned our attention to the Blue Meshra, and tried to take them down. Much to our surprise, the meshra's wounds healed almost as fast as we could hurt them! And the more we hurt them, the brighter they glowed! They were healing each other! And not only that, but they were rodding us!

We finally took down both, and continued on through the Estuary,

My goodness, it's pretty.

Our hunt ended as we ran into another waterway. This one also had bridge builders, who claimed to have taken out Brigid because she wasn't part of the Fen'neko building union. They said that they have enough materials for their next bridge, but that they just needed their permits. Darn you bureaucracy!!!

We found a path down to the south western border of New Estuary, and took it to the Old Estuary. Our explorations were over.

I must say, this was a fun week for trowls such as myself! New adventures, and no complete wipeouts!

The Clump has moved to its new home at http://clump2.noivad.net/.

Chaos Storm #666 has swept the Lok'Groton island chain. Please post any changes you have observed and wish to share with others in the comments. If you don't want to read possible spoilers, please do not read any further!

* Some types of inadvertent health poisoning should now be fixed. Advertent health poisoning is a whole nother matter, of course.
* For those transitioning Arindal players who had registered with GygesGM, your characters should start receiving accelerated ranks this update.
* Development continues on new projects.
* No crashes in 572 days and counting.
* Youll have to explore to discover the rest of this Chaos Storms changes... if you dare!