I have a few more sketches from Bawkmastime to show you and your readers.

The first are from the great NNK Bawkmas Coin Giveaway in town center on Bawkmas Night. As you can see, several members of NNK, including Suu'ub III, Ravenstorm, Lister and others, announced they were going to give away coinsthen proceeded to run around Town Center dropping piles and piles of coins on the ground! Any exiles around were invited to run around and grab the coins. Healers like myself and mystics who were lucky enough to be around were able to fatten our purses by hundreds or even thousands of coins!

Thanks to NNK for the fun and profitable Bawkmas merriment!

Santa Chicken made another appearance around Bawkmas as well. He gave out several intriguing toys, including a clockwork chicken and a fragile stick cartboth of which can be wound up and set down to roll around on their own. I've attached a few sketches of my attempts with the clockwork chicken.

One last Merry Bawkmas to you!

Posted by Para at 10:45 AM
Wendeckas and Santa Chicken 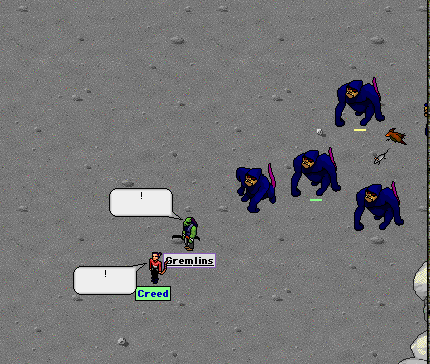 Two exciting events happened in Puddleby recently. The first was probably a little less thrilling to most than the second. :-)

The first was a much larger than usual swarm of Large Midnight Wendies in the Foothills. Gremlins and I were running through coining a little when we were confronted by four LMNWs at once. We thought that was rather a lot, but even as Gremlins had those nearly polished off -- more appeared! All told, I believe Grems killed 10 to 11 LMNWs! 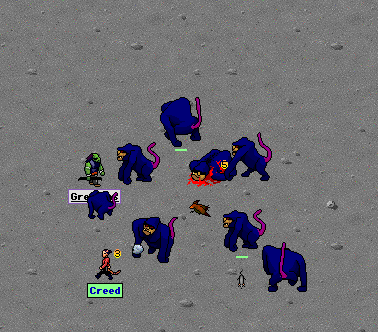 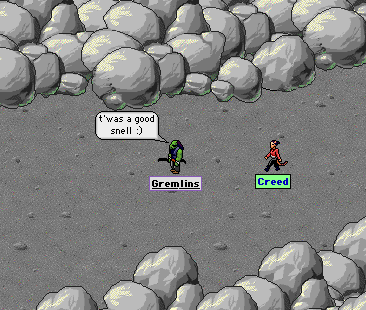 We returned to town soon after to find none other than SANTA CHICKEN HIMSELF in Town Center! He was, of course, surrounded by happy exiles. I got in line, wished Santa a Merry Bawkmas and told him I'd been a good fen this year. I asked for a cluster of togron nuts, and my wish was granted! 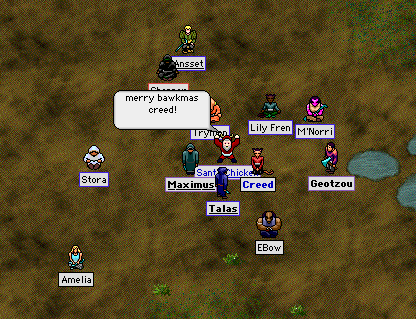 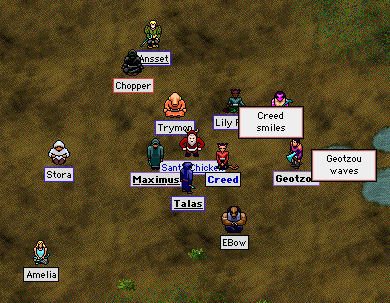 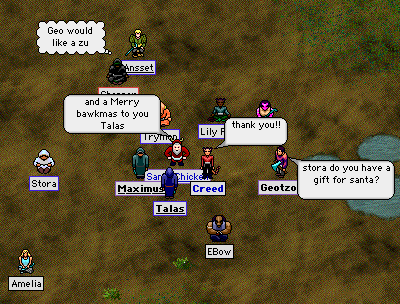 Cheers and Merry Bawkmas to all,
-Creed

Posted by Para at 09:12 AM
Snow Yorilla Vale 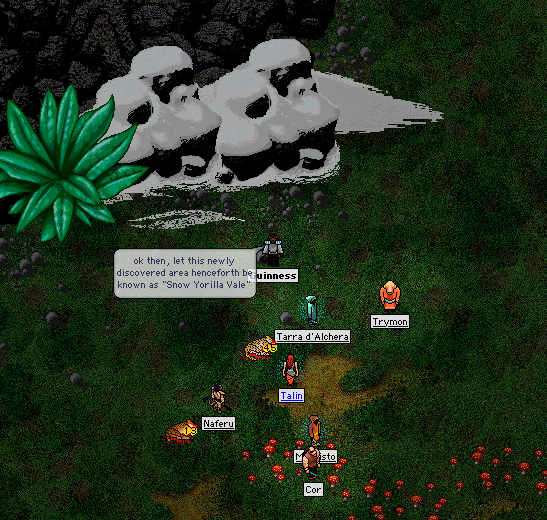 It all started with a rescue on Metzetli Island . . .

It was deep in the night on the 16th of Autumn, 581. Talin and I were on route to rescue a fallen journeyman mystic, Trymon. The rescue attempt was tricky, and almost failed. While Trymon and I were fallen, a strange looking Yorilla showed up. He was greyish in colour, and upon noticing us he beat his chest. Trymon showed him we meant no harm, and the Yorilla calmed down a bit. The Yorilla then pointed west and beat his chest again. Then the Yorilla pointed east. I pointed west and made a quizzical look on my face. The Yorilla responded by beating his chest again and pointing west.

That was when Naferu, Cor, and ShadowD showed up to help with the rescue. The Yorilla fled before they could arrive.

After we were all back on our feet, ShadowD left. but Trymon knew we should try and find out what the Yorilla was trying to tell us. So the five of us headed west, and north and west and north. It was a little confusing, we were mostly following Trymon's vague feelings. Along the way, we encountered odd creatures that seemed better adapted for the cold than for the jungle of Metzetli.

After awhile we came upon a vale, covered in snow. It seemed this was that Yorilla's home. We heard the Yorrila's cry of "Au au au!" from deep within the vale. We stepped inside and felt that we all had grown somehow from the experience of being the first to discover a new land. But the creatures inside were strong! So we retreated quickly and waited for Mephisto and Tarra d'Alchera to come and assist us explore.

While waiting for them we decided on a name for the place. When someone had mentioned the name "Snow Yorilla Vale", the Yorilla made a gesture to us that he found the name fitting. I made an announcement there and then.

Upon going back in to explore we encountered a variety of creatures that seemed well fit for the cold. There were Snow Haremau Kittens, they hit hard and were fast. Also some Snow Cougars, but these I had no problems handling even on my own. I sighted some Polar Bears that seemed much like the ones you'd find on the cloud. We encountered one Glacial Greymyr. Also there were a few Snow Yorillas. We even encountered a Snowbuck! The Snowbuck was tough, not impossible to hit but much harder than a Fellbuck. The most dangerous creature we found there was the Abominable Snow Yorilla. The ASY would throw abominable snowballs; Naferu fell to one, and we could not get him back on his feet.

Upon entering the Snow Yorilla Vale, you can head west and come to a lava pond where you can warm yourself up a bit. If you head east there is a cave, we tried to make our way into there but the entry was made tricky by a Snow Yorilla.

I'll be posting some of the scribbles I made onto the Sentinel, keep an eye out there for some pictures!

Posted by Para at 08:32 AM
Mystic Invasion 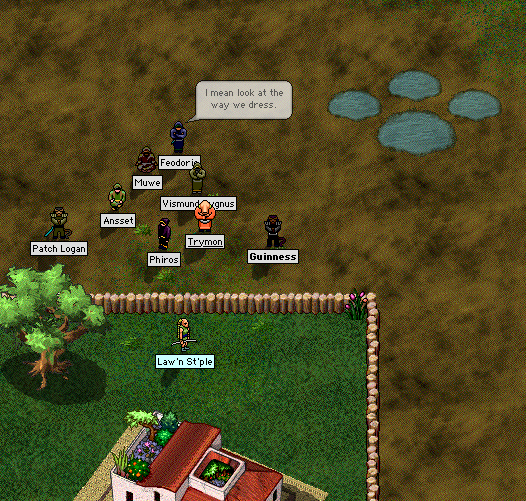 Early in the morning on the 88th day of summer, 581, most exiles were fast asleep in their beds. There was just myself and Patch Logan around to fend off creatures from the town. And all of a sudden, six mystics of various ranks showed up!

I thought it was rather unusual to see, so I took a picture to remember the occasion. So, here is a picture of mystics doing what mystics do best.

Chaos Storm #681 has swept the Lok'Groton island chain. Please post any changes you have observed and wish to share with others in the comments. If you don't want to read possible spoilers, please do not read any further!

* Happy Bawkmas!
* No crashes in 10 days and counting. There was a single (as yet unexplained) server crash on 25 November, which had the side effect of revealing a hitherto-unknown flaw in our server monitor tools. That flaw, in turn, triggered a number of unnecessary and annoying server restarts, every ten minutes or so, during the evening of the 25th  until a smart GM deduced what was happening and assassinated the misbehaving monitor. The monitor tool has been repaired, and diagnostics have been installed to try to discover what caused the original crash.
* Youll have to explore to discover the rest of this Chaos Storms changes.

ClientGMs faithful iMac G5 has passed away after a protracted degenerative illness. As a result, were no longer able to build the traditional PPC/Carbon client, for users of Mac OS 810.3. If you havent already switched to the newer Univeral Binary client, now is the time to do so. Accordingly, the minimum Mac system requirement is now OS X 10.4.

Posted by Para at 07:18 AM
Strange Invasion 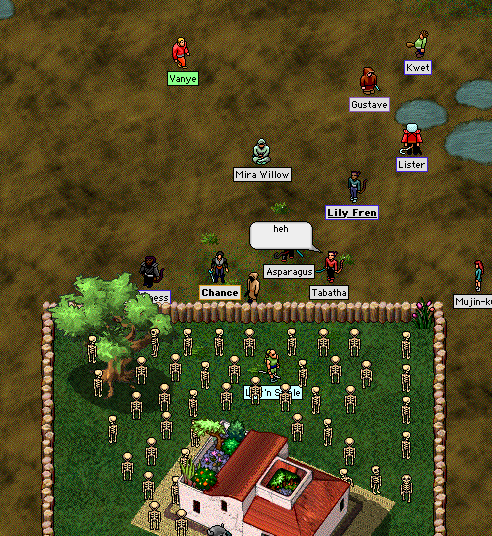 Chance here with a few sketches from the recent strange invasion of a host of "random" creatures, ranging from Skels to Ember Wyrms and Lava Beetles! I thought those who missed it might be interested to see how the invasion began. Well, I actually missed sketching the first wave of Abyssal Hunters, but soon after that wave, a huge crowd of skels appeared near the Sentinel (see above).

Strangely, the monsters were quite threatening toward Law'n.

But some of those in town did not seem too worried about losing her! 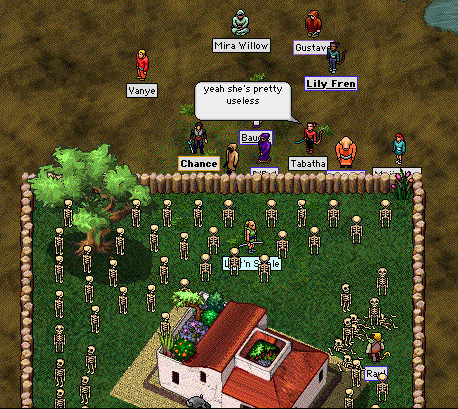 A couple of exiles entered the "zoo" area and started slaughtering the skels, which seemed to trigger a wider invasion of them. 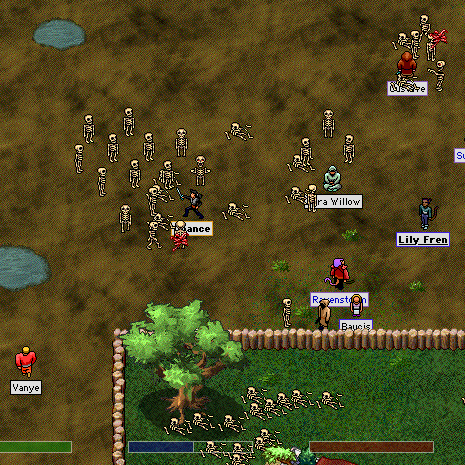 This was followed by several more waves, including more AHs, Lava Beetles, Ember Wyrms, Lava Wurms (I think!) and many others. I can't even remember them all. After some time, when many exiles were gathered in the free library healing up, we all received a strange feeling...

Shortly after, the gods generously granted experience to everyone involved in the battle.

It took a while for the effects to die down, though. I moseyed north and was surrounded in north forest by a huge swarm of vermine, mostly regular ones with a few larges thrown in. I had to call for some help! There were also an unusually large amount of vermine, including LVs and GVs, in the orchard and the snell one north of orchard. Then, in the first NWF snell, I was surrounded again by GVs, DVs and Artaks. I had to call for help again, and luckily, numerous exiles came to my aid.

One of the groups that came to help consisted of Trymon, Lily Fren, D'Ead and Zaerion. Trymon had been having difficulty since the invasion earlier. He kept coughing and choking, and he had coughed up a chulie in town. Now he fell right before our eyes! 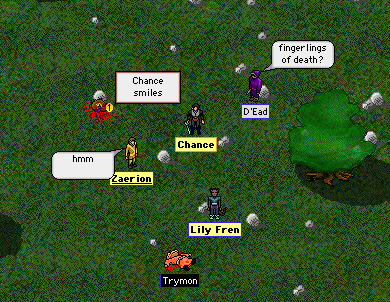 Lily Fren made a momentous announcement. 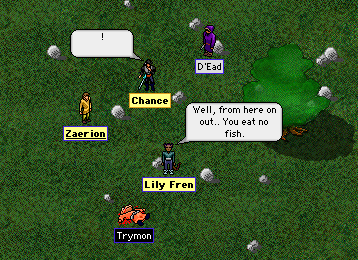 But Trymon wasn't having much of it. For the rest of the time I was out of the library, I could hear Trymon and his companions arguing about his future dietary needs.

Best of luck to Thoom Trymon with that fish problem... 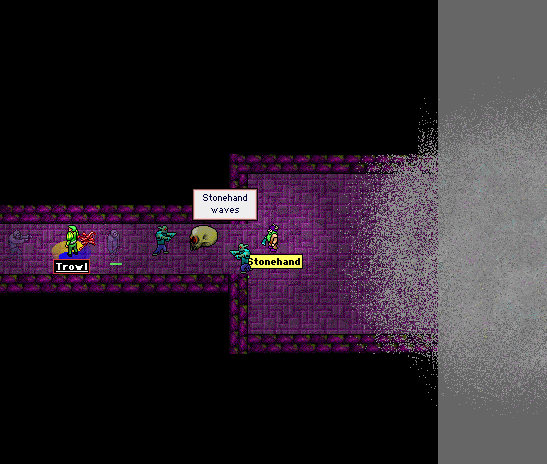 On the 14th day of Summer, 581 Stonehand, seen here tampering with forces beyond his ken, got one step closer his goal of gaining the evil powers of the Darshak Liche. In an effort that started in what those who still use the old calendar call October 2009, Stonehand has learned to befriend the Darshak Liche. No word yet on whether he can begin on morph, but it is unlikely that his training is sufficient at the moment.

Stonehand is quoted as saying that he seeks the power of the liche for "Totally not evil and nefarious purposes" and that he is "in no way determined to gain power and eternal life, no matter the costs".

It is likely that this morph will be his stepping stone on to greater, more powerful, things. The liche's extremely high balthus will allow Stonehand to brick much more readily and allow him to solo creatures he needs to study for future morphs.

Truly this is a great day for Stonehand. We all wish him well in his future rangering endeavors.