Chaos Storm #696 has swept the Lok'Groton island chain. Please post any changes you have observed and wish to share with others in the comments. If you don't want to read possible spoilers, please do not read any further!

* Reason-messages are once again allowed with anonymous good karma; the v687 restriction, disallowing such messages with anonymous bad karma, remains in effect. (Our bad, so to speak.)
* Wisewood wands are slightly, um, wiser.
* No crashes in 115 days and counting.
* Youll have to explore to discover the rest of this Chaos Storms changes.

I am very happy to pronounce that my squire Lafiadem has been promoted to Ser Lafiadem of the Order of the Golden Dawn.

Congratulations to her, after she had to solve a lot of different tasks to become a knight.

Below you see some pictures of the promoting. 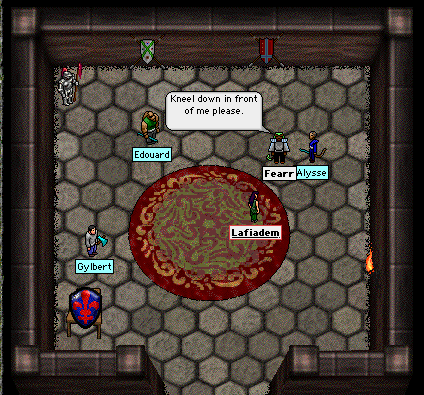 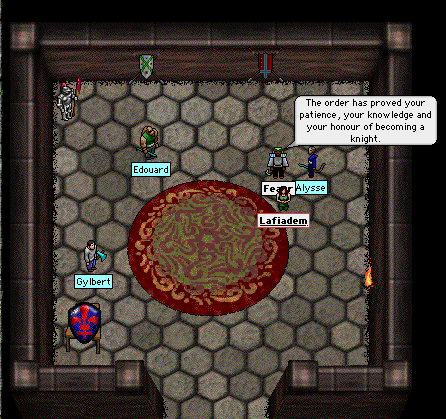 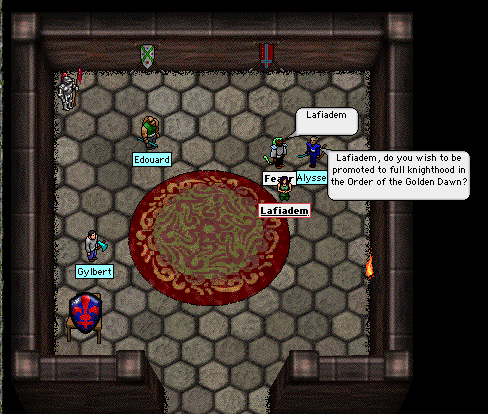 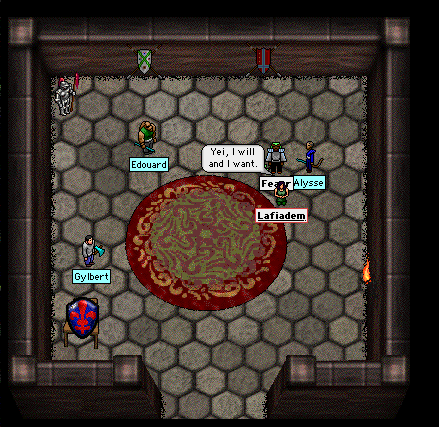 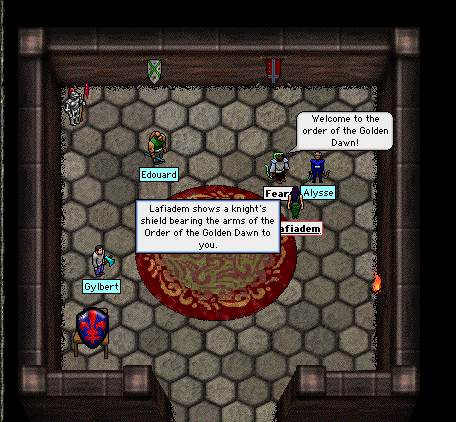 Hold your knight shield into the air for the honor of your order and with best wishes, 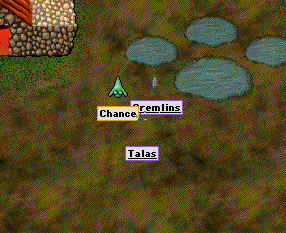 Just for fun, I thought I would send you this tale of three Rangers, also titled:
A Mini Mini and Her Many Mini Friends

Posted by Para at 06:40 PM
Neko No Kessha Updates 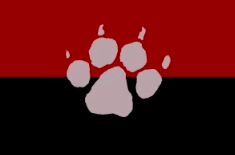 Neko No Kessha has updated their blog with clan and Puddleby news, player achievements, and hunt updates, along with pictures and stunning artwork from our new member Aye'Cha! 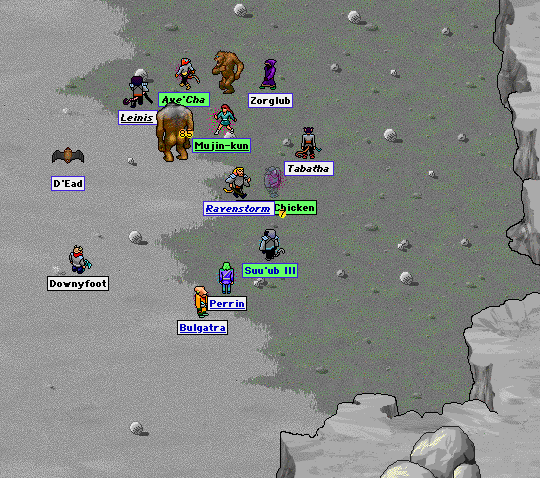 We'd love to have your readers check us out sometime!

Posted by Para at 07:54 PM
Slyph and Trymon's Engagement Party

Ser Slyph and Trymon's Engagement Party turned out to be a fantastic successas anticipated. Thank you to all who attended. I thought I would send these sketches of the event to TMN, so that those of your readers who did not attend might experience true regret at having missed this marvelous occasion.

The afternoon kicked off with several scintillating speeches. 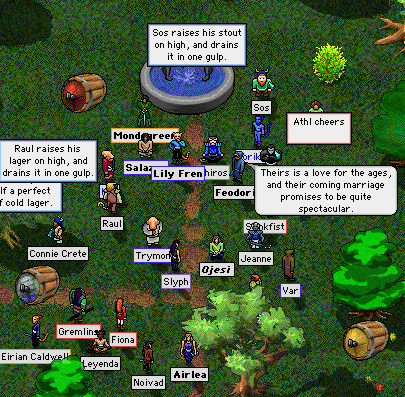 Some guests were rather quick off the mark. 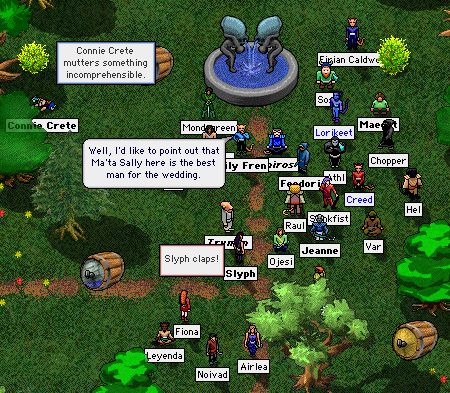 Things really get under way, and certain people get painted. 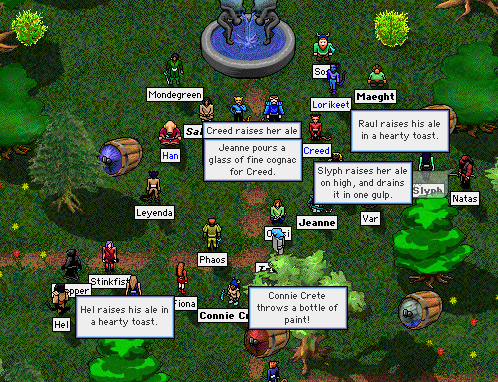 Our gracious hosts take the celebrations to a new level. 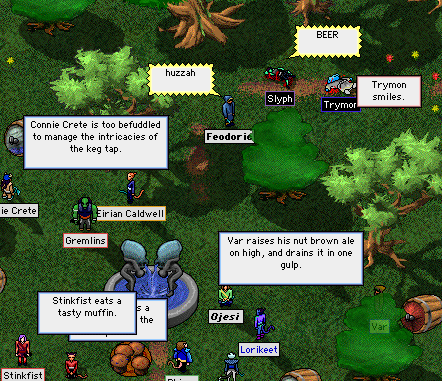 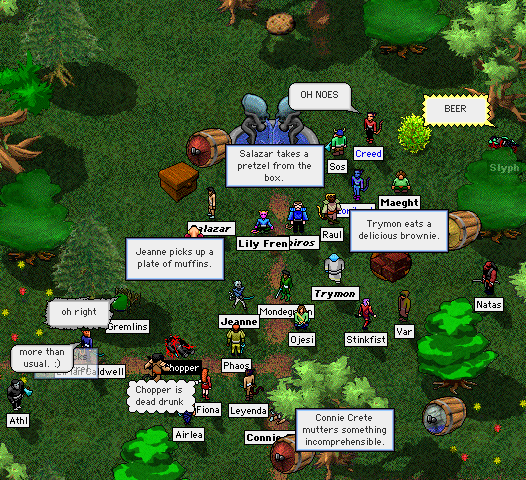 Ser Slyph entertains the admiring crowd with an impression of Prue. 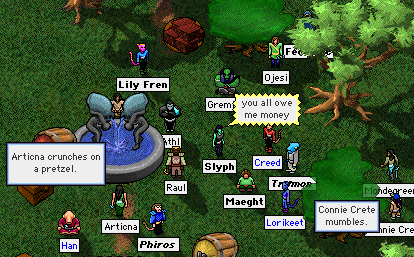 The party moves to the casino, and the bride-and-groom-to-be treat every guest to a roll on the 100c slots! 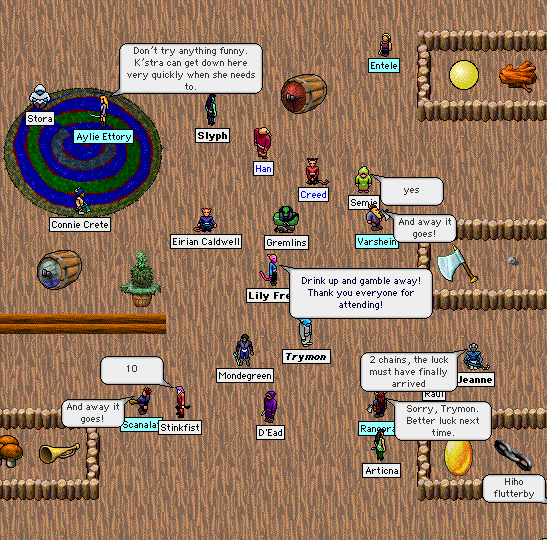 Posted by Para at 11:13 AM
InGame Timer by Talas

Talas has created a new InGame Timer to help you track the time and date in Puddleby. I have added it to the right-hand column of TMN under More Clan Lord Links.

Chaos Storm #693 has swept the Lok'Groton island chain. Please post any changes you have observed and wish to share with others in the comments. If you don't want to read possible spoilers, please do not read any further!

* Minor acoustic retouchings in the Bard Hall.
* No crashes in 94 days and counting.
* Youll have to explore to discover the rest of this Chaos Storms changes.

Last night one of the Darshak, or something that knew about the Darshak, talked to exiles over the sunstone. "Something" started by thinking to Atlantix and trying to get him to join a hunt already in Ash City's 2nd Dark Temple.

People on Ash were being contacted by this mysterious being as well.

"Something thinks, "Baker's man should go to the library. Only real healers deserve these lands.""

"Something thinks, "The Claw of the Dragon shall rise up against its foes and vanquish all and shall be victorious.""

In the end, I was wondering what this Claw of the Dragon was. It may have been referring to the exile DragonClaw, who happened to be in Ash City at the time, but it didn't seem to be in context of "Something's" seemingly pro-Darshak stance. I figured this news was worth reporting.

Well, my good friends, citizens of Puddleby, I am very pleased to inform you that the event we have all sensed and in whose mysterious approach we have all delighted has arrived! Though I can barely grip my pen, overcome by emotion as I am, I put the truth down here for all to see:

Ser Slyph (renowned and admired knight, healer, socialite, celebrity and many other things besides) and Trymon (esteemed Journeyman Mystic, the ever vigilant watchman over the young) are engaged to be married! 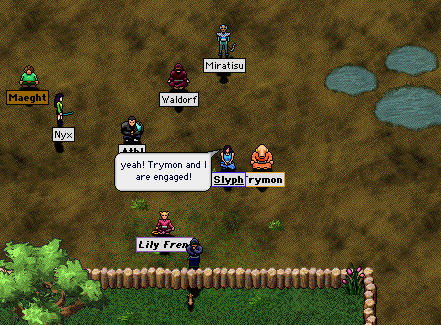 And perhaps even more importantly, they are throwing a party to celebrate it! This (OOC: Saturday at 4:30pm PST) an engagement announcement party is planned whose splendor promises to be surpassed only by the wedding itself. The gracious nature of these lovers, so exquisitely well suited for one another, clearly shows no bounds, as they invite one and all to come and witness the refined beauty and radiant passion of their love. Yes, that's right. YOU are invited to this most intimate and exclusive of gatherings. (Some exceptions applyyou know who you are. So do we. We also know where you live.)

Be sure to attend and look your best for this fine garden party to be held at Gaia's Gardenjust west of the playground in east town. 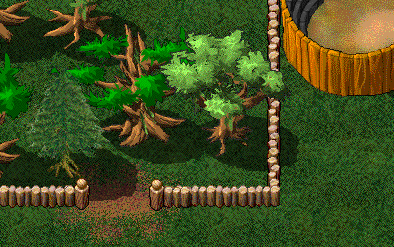 And now a summary for our valued lazy or semi-literate friends:

What: Slyph and Trymon's Engagement party!
When: (OOC) This Saturday, the 5th of March at 4.30 PST!
Where: Gaia's Garden, just west of the playground in east town.
Dress: Spiffing!
Bards very welcome but no poetry please.

In the event that the venue becomes too crowded, some guests may be relocated to the Ethereal Plane.

Discussion and more information on the Clan Lord Sentinel.