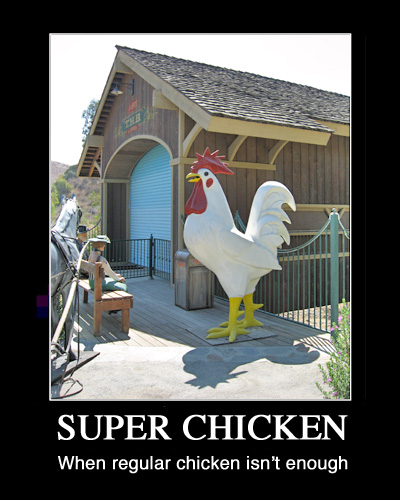 Hello Puddlebeans! Three silk and a trip to New Estuary gets you a nice pink shirt. That nice pink shirt and three brambleberry dyes gives you a gold shirt! there is also a nice light blue healer like shirt with enough lila berries. Also, a good hot pink! I wasn't sure who to share this with, so I figured everyone would do. 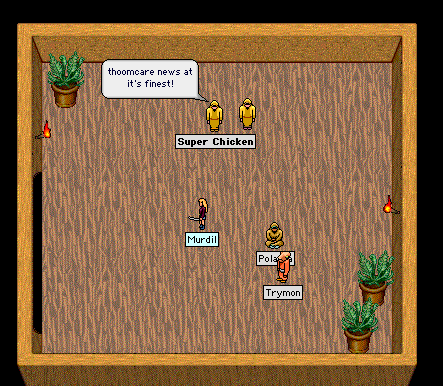 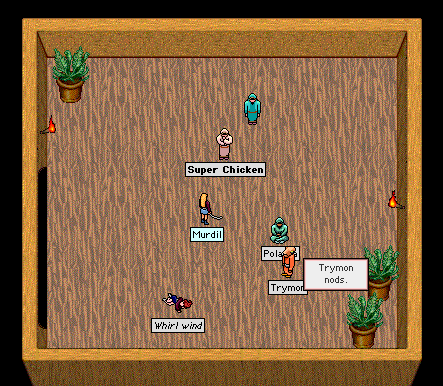 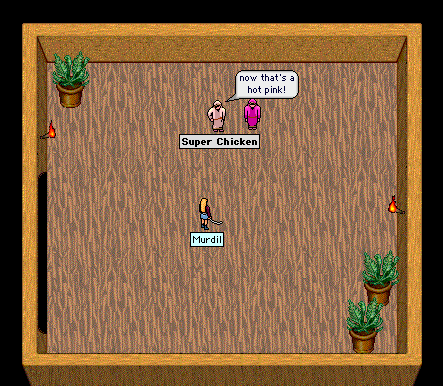 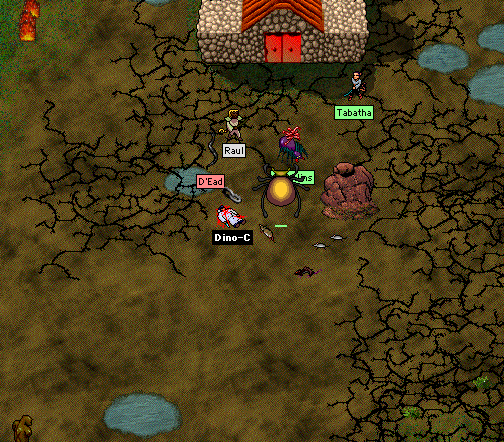 Dino-C sent to TMN these images of the recent Earth Day Rage. He reports there were "All kinds of nasties!" 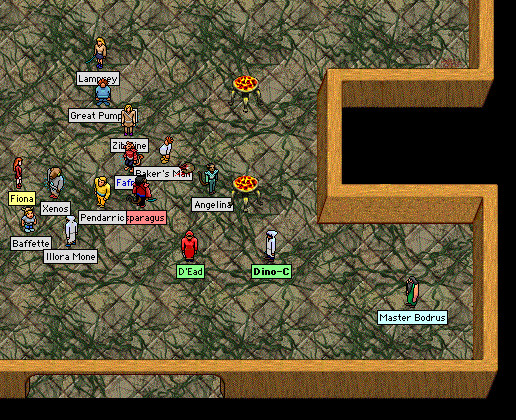 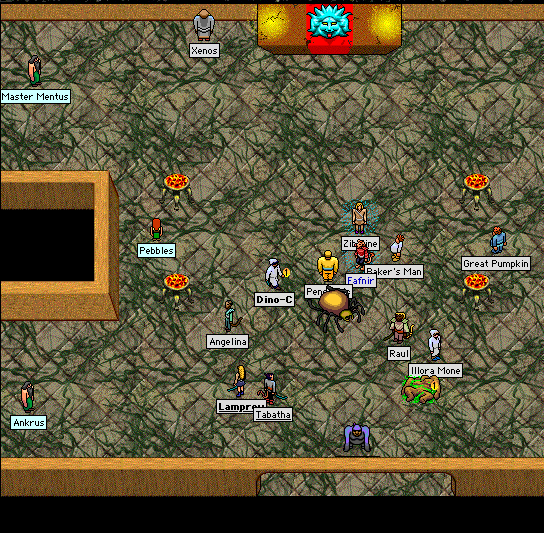 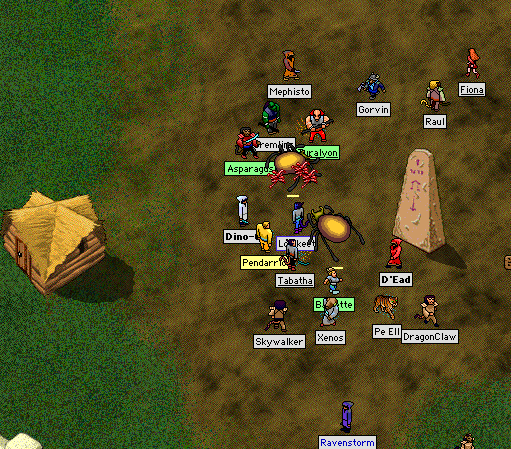 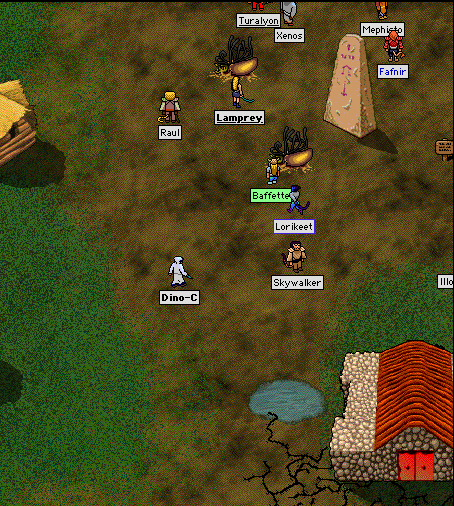 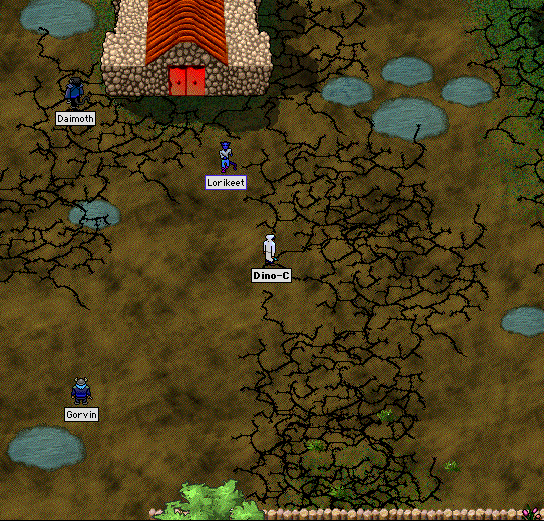 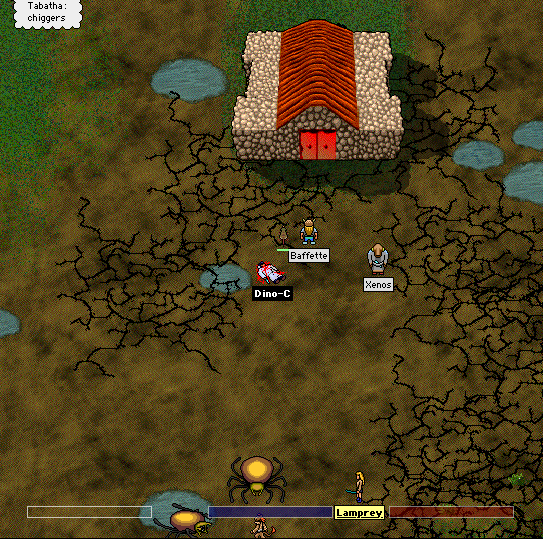 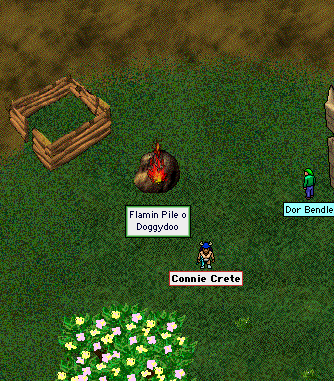 So there were an invasion in town tanight. Actually I oughta back up.

There be this flamin pile o doggydoo by tha fighter hall. Raul and sum folks swears blind that they recharges champeens fast.

I were out fer ta mosey fer coins and were leadin a giant feral ta tha town when I first saw it so assumed tha feral had dropped it but it seems it was there befer. Melly got a spidysense and felt it and so decided ta investigate. He brunged a bunch o earth critters ta looksee and study it and stuff. Cut ta invasion with innerestin critters and a daid Maeght and a Stora in tha liberry fer safety. Time passes.

Me and Vree and Trymon went ta visit with Melly ifn he had sumthin ta say in his conference room (basement). He were plumb tuckered out from lookin at tha flamin pile, but did gitta talk with us briefly. Durin tha invasion he said tha invasion were him sendin stuffs ta see tha flamin pile. He said he wanted tha flamin pile. He were curious about why it were flamin (nobudy said it were born that way). He noted it had sum lines in tha rock and that it didnt move on its own. Ima cuttin out alla sunstone spam in response since it were mostly me.

After tha invasion were mostly dun, he camed ta his basement. Vree talked ta him and I translated fer Trymon who be gonna larn dorf "soon." Melly said he finished lookin at tha flamin pile. He tol Vree it were temporary and concentrated fer ta be o earth magics only he said magic with that magik accent what be jest soundin funny. Melly be askin us ifn we knows tha source o tha earth magical flamin pile. We said we didn't. Vree asked ifn it were dangerous. Melly said it prolly warnt fer ta him. Vree asked ifn it were dangerous fer ta folks mebbe o tha mystical persuasion (i.e. damned all Higgy). Melly said we'd prolly mebbe git better. (By this time Lorikeet were out so is easy ta git better at that point.)

Vree asked ifn mebbe it were harnassable sumhow. Melly didnt use tha term ephemeral but tha sense were there. Melly then said ifn we found tha source he wouldnt mind his own flamin pile o doggydoo fer ta do experiments and play jokes on his brothers with.Vree asked what kinda jokes and Melly said mebbe he could do sumthin or not with it. Vree asked whatfer we oughta look fer ta see tha concentrated stuff. Melly said it might be crystallized or gemlike.

Then Melly were dun causn he were tuckered out from havin his folks lookin at tha doggydoo and chattn with us. Me and Trymon kinda concluded combin tha feral den fer doggydoo would be sumthin better suited fer other folks.

Chaos Storm #699 has swept the Lok'Groton island chain. Please post any changes you have observed and wish to share with others in the comments. If you don't want to read possible spoilers, please do not read any further!

* The Bloodpools cravings have been somewhat... adjusted.
* The Belt of the Wild should no longer track monsters into the wild gray yonder.
* Homes containing absurdly excessive amounts of furniture should no longer crash or lock up the client.
* No crashes in 136 days and counting.
* Youll have to explore to discover the rest of this Chaos Storms changes.

Strim, Paramedic. I do not often contribute to your fine publication. But I was able to witness some GM antics in the fairgrounds recently, and I made a few humble sketches that some exiles might enjoy.

As you can see, YappyGM was speaking to some exiles. He provided entertainment in the form of Biological Space Monsters, which were quite easy to pwn. Alas, we quickly found we could not stuff them as trophies. As you can also see, several people were very upset about this . . . especially Mystic Salazar, who became rather . . . attached . . . to his BSM.

Cheers to all,
Peril.

The other night in Town Center, I got to see Gremlins showing off his brand-shiny-new Spicy Mander morph. Those in attendance thought Gremlins might be the first Ranger to achieve this particular morph. (Of course Natas had to make a joke . . . and a hilarious one, I might add!)

In other Ranger news, Chance is STILL working on her kit morph. Heh.

And speaking of firsts . . . there was an announcement made recently that a Thoom fighter had become a Champion. But I don't remember who it was! (I apologize to that person.) Some exiles were speculating that he or she might be the first Thoom Champion. It really may be the case, since there aren't too many Thoom fighters.

If anyone knows more, please comment or send in your news!