Chaos Storm #735 has swept the Lok'Groton island chain. Please post any changes you have observed and wish to share with others in the comments. If you don't want to read possible spoilers, please do not read any further!

* No crashes in 387 days and counting. The record is 723 days.
* Youll have to explore to find the rest of this storms changes. 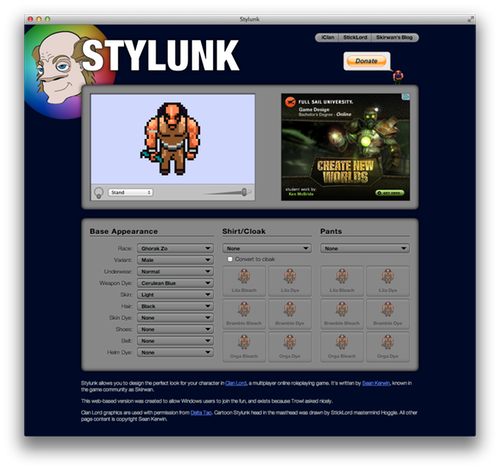 Stylunk is now a Web App! Check out the beta version:

Posted by Para at 09:11 AM
Overview of New Areas by Chance

I wanted to share a few sketches of some of the new areas and creatures recently seen around the lands. None of these is big news to anyone, but there may be younger exiles who haven't seen them yet, so againI thought I would share. 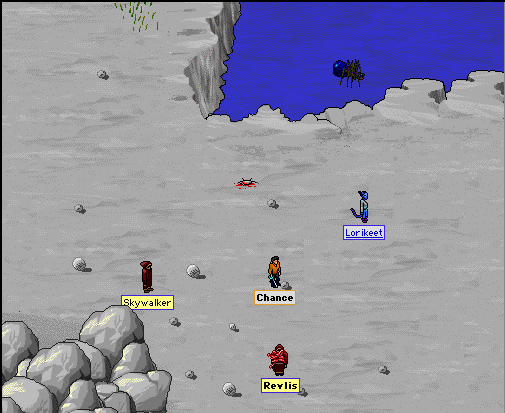 The first item is actually an anomalya swimming spider! A wall arachne followed our group by water throughout the gloamings area of Metz and stayed close to shore whenever we paused. It was very strange, and we wondered whether our friend Gremlins might want to join the hunt! 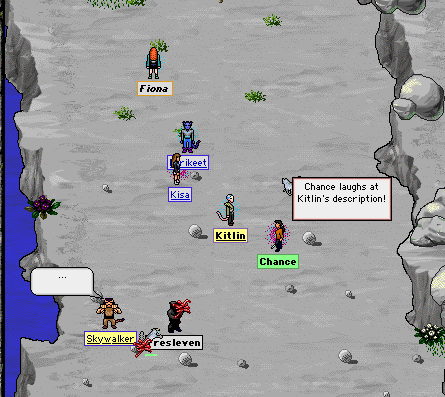 The next sketch is of some snowcats that attacked our group on the same hunt. Apparently these snowcats have shown up all over the lands as winter has settled in. 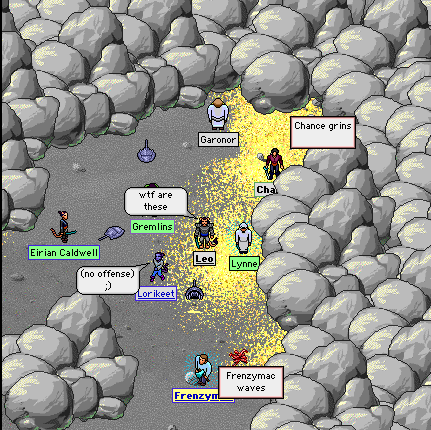 There is a new area off the southwestern beach, far south of Kitty Beach, where one can find some strange new creatures . . . including horseshoe crabs! These are fascinating creatures and good expy for mid-range fighters. 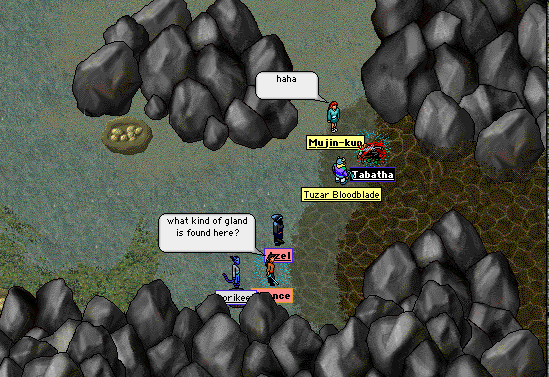 And finally, I had the chance recently to visit more of the Undermarsh than I ever had before. We killed the Lord of the UndermarshI was only able to sketch the aftermath, but missed the Boss himself (itself? herself??). Apparently he drops a gland that can be used to make some really cool pants. Being a Mini and a connoisseur of fashion, I shall have to explore that further! We also saw a third pet Reedcat in the marsh village of the estuary, named Poppins. I had not met Poppins before, only Penny and Piper. 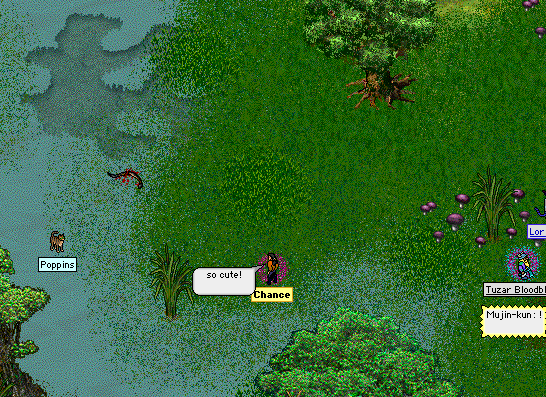 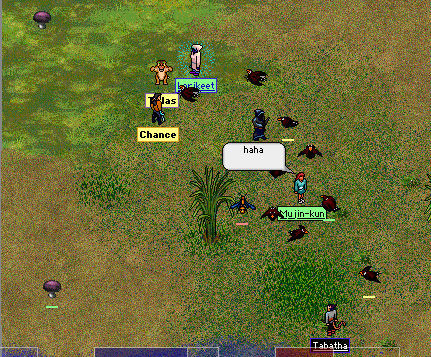 Thank you for posting the sketches I made on a recent estuary hunt. I wanted to share some more sketches from the estuary. These were made by my friend Chance, who showed them to me so I could share the fun and unusual events she witnessed!

Mujin-kun was hunt leader and jokingly requested a spawn of lowland hawks from the gods. To our surprise, the hawks actually appeared!

So Mujin, again joking, requested the two creatures that our group was seeking for Ranger lastiestoads and andvari. 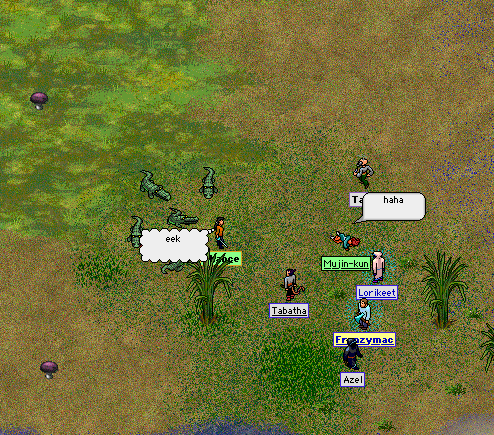 The toads and andvari immediately appeared! Thank goodness, though, her final prayer was NOT answered! 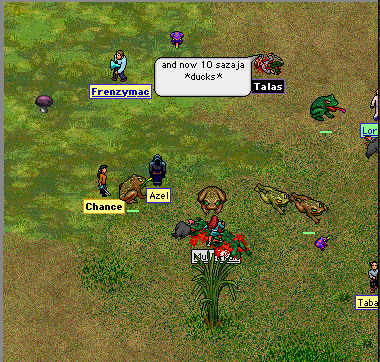 Chance adds that it was a fun hunt, and the gods were especially good to the group.

Posted by Para at 07:06 AM
Farm Cleaning 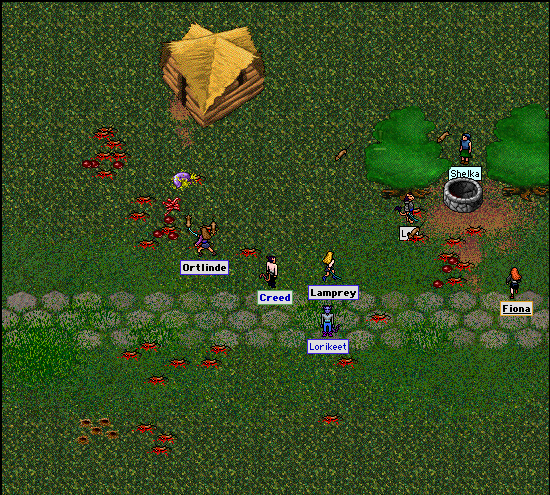 On our way to the nexus recently, a few of us ran into a very large swarm of vermine in the east farm. 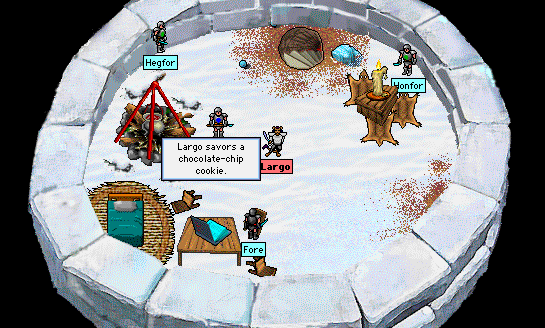 Fen President Largo reports on his discovery of "a truly awe-inspiring expanse of ice and snow to the northeast of the savannah." Find out more about the region he has named "Largoland" in his most recent journal entry.

Chaos Storm #732 has swept the Lok'Groton island chain. Please post any changes you have observed and wish to share with others in the comments. If you don't want to read possible spoilers, please do not read any further!

(The operator of Bawkmas gifts assumes sole responsibility and liability for all deaths, injuries and/or damages to body and property directly or indirectly caused by or resulting from usage of Bawkmas gifts. No warranty is expressed or implied. Individual results may vary. Void where taxed or prohibited. Past performance does not guarantee future results.)