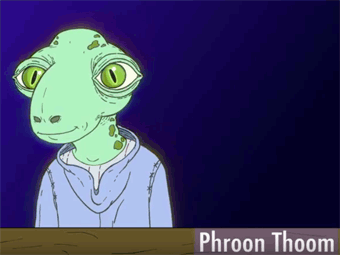 More info and poll on the Clan Lord Sentinel. 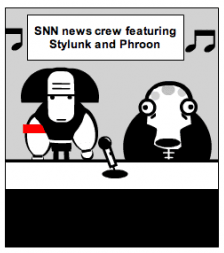 Hoggle posted on the Sentinel some great selections from the Stripgenerator comic strips he and other clanners (including Daimoth, Largo, Gorvin, Skirwan, Reckinyards, and Batkat) were creating some years ago.

Later in the thread, Hoggle supplies links to the collections and wonders if there might be more out there to find...

Posted by Para at 08:50 AM
Fairgrounds Chat 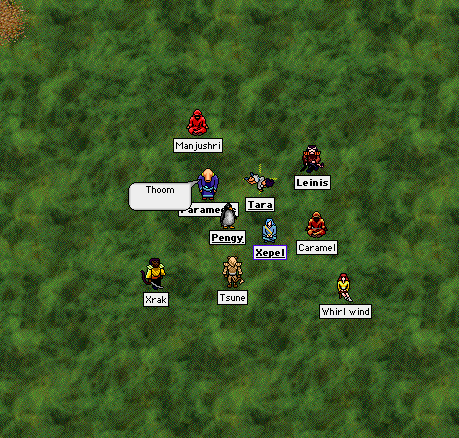 Some of us gathered in the Fairgrounds last night to discuss recent concerns.

A transcription, Fishwrap-style, is included below.

Chaos Storm #1042 has swept the Lok'Groton island chain. Please post any changes you have observed and wish to share with others in the comments. If you don't want to read possible spoilers, please do not read any further!

* No significant changes this version.
* No crashes in 1,693 days, and counting. (A record!)
* Today marks the 1042nd week of the games existence, more or less. This means that Clan Lord has been up and running, almost continuously, for just over 20 years. Happy anniversary to us!

However... as you will have noticed, the Account Portal has been out of order for some months now. Unfortunately, weve concluded that, for reasons of time and resources, we are unable to revive it. This means its basically impossible to sign up new players, or for existing ones to modify their accounts, add new character slots, transfer characters, etc.

Moreover, we have to recognize the writing on the wall for our current Mac and Windows client apps. Both are technologically out-of-date by decades, not just years. Weve nursed them along as much as we could, but without drastic rewrites theyre not likely to survive more than, say, 1218 months.

Even if we had the time, skill, and resources to rewrite the clients (not to mention our associated internal world-building tools), were still stuck with game assets  primarily artwork and sounds  that, although they may have been acceptable or even ambitious back in the late 1990s, are nowadays woefully inadequate. They would all have to be redone, from scratch, to look and work reasonably decently on modern hardware.

Finally, even the least observant of players will have noticed that the pace of world enhancements has lately slowed to a trickle. Many of the volunteer GMs and their helpers and the artists and contributors who had put so much time and effort into the Clan Lord world over these last 20 years or so, are now inactive. Without their enthusiastic participation, the game world stagnates.

We have enormous gratitude to all our dedicated players and wonderful collaborators. Were interested in your thoughts; weve started a discussion on the Sentinel, where together we can work out the future of Clan Lord. 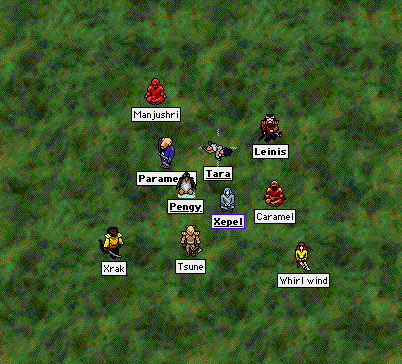 A chat tonight with Pengy 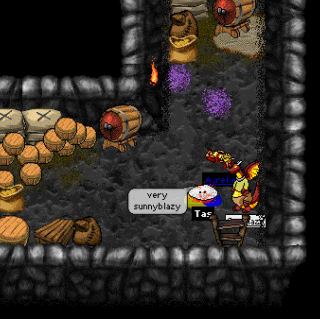 Taryn hunt in Village. But we were fighter 'lite' but healer heavy (like more than 4... maybe 6? I forget!) even hadda Mystic with us, a REAL one as Connie would have put it (Drabby). I had nice things to say to SunBlaze's custume! We died lots, and Taryn delegated and made me a rod! For a while that worked pretty well, except I can't rod more than 2 things at once and we got 3+ things sometimes . . . then it went to pieces . . . kinda. We got most folks out except those who needed to leave earlier.

Same hunt: waiting patiently to rescue... Chmee, Tas, and DC next to portal to Village in east town: 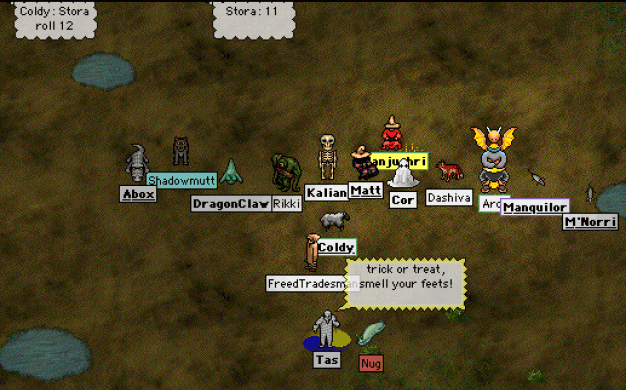 There was a notice of a raffle taking place during Zombie Nite. Here are some pics. I helped Coldy keep track of what he was giving away. I got a keg of black beer which I shared with everyone afterwards (and falling to it, of course). It worked out great; everyone got something. Just enough folks and stuff to give away. Ok ok, I'm not sure Shadowmutt got anything.... 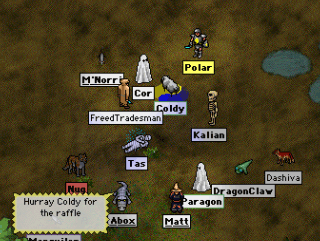 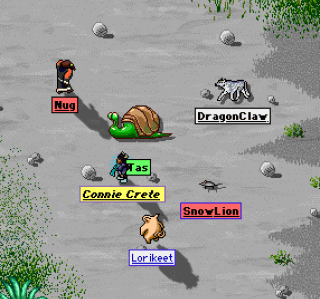 Lori, kinda, dared Connie to do a depart hunt cause Lori said to Connie, "I've never departed on your hunts.' So Connie took that as a dare. Yup, we departed by going to Ash Town. Then we went to Metz. And I found a new costume. Sorry no photos of departsville with Lori. SO i can't PROVE we did it . . . well, maybe in the logs . . . so this is us headed to Metz Forest. Two BBers, a ranger, Connie, and Lori and Tas. What could go wrong? We survived!