Chaos Storm #1219 has swept the Lok'Groton island chain. Please post any changes you have observed and wish to share with others in the comments.

Its hard to describe briefly what occurred today and lead up to it, but I will try my best. A few days ago, someone from the time of the Ancients reached out to speak with several exiles.

Whether she herself was an Ancient is unclear but she spoke of Tart'targ as her mother who was older still. She called herself Pelaegia and spoke of the ocean and the weirding waters in an ancient Citadel atop a mountain peak in the Eastern Mountains. Under these waters lay ruins, cracks in reality, gateways acting as glimpses to a shadowy plane.

Unfortunately, the time between speaking and meeting was short, but a group of exiles consisting of NNK, Stinkfist, Mehan, Salandra, Haffron, Phroon, Gorvin, Naferu, Pirate, Poplar, Garr, Arbitur, Aspasia, Kvynn, Gustave, and I battled our way into Shadowspring Citadel to meet her.

She said she cared for the Citadel and worked to repair the cracks and damage done to it but requested the help of lantern bearers and their companions to banish a threat to the machines.

She asked if we had not felt the disturbance? The way the world feels slightly unbalanced, uneasy, as if tilted and uneven. A barrier between us and the sun, a weakness, a frailty.

While we know this state of being to be a reality, it apparently was not always so. Moreover, Pelaegia stated that lantern bearers, children of the Sun, should be no weaker than a child of the Moon, nor a child of the Earth. She told us of a time when that was so. A time before our remembering.

Surprised at the revelation that Mystics had never known more strength, she told us how we may find and banish this leeching spirit. Described as a vast golden, horrible, hungry wyrm, it is drawn to the greatest concentrations of the sun's energy so it may consume whatever it can. It must be banished back to its realm by destroying the physical body it manifests in our world.

Once it is no longer able to consume the sun's energy can the lantern bearers re-right the imbalance it left behind. In the ways of the Ancients, in the language of magic the lantern bearers must stand on the plaza of the sun and redirect the Sun's energies back into the machines by invocation.

Upon completion of this task she said we will feel the sun as we should and its power return to us. She requested that we seek her out when we have defeated the wyrm and she will teach us how to make amulets of breath, which will allow us to breathe water once we have the power to work such magic.

Not sure we would find what we were looking for, we charged the machine fully to perhaps lure the creature to reveal itself and feed.

With great flashes of light, sun wyrms appeared between one blink and the next.

Swarmed, we fought them back. Suddenly a larger wyrm appeared and attacked as the bodies of the lesser wyrms dissolved into nothingness.

The fight was vicious but ultimately we prevailed. As it perished and returned to whatever plane it was from, we felt all the sun energy it had been directing toward itself gather around Salandra and I instead.

After consulting with Phroon, who with the help of Poplar, Fanan and others has studied the Ancient language extensively, we managed to translate the invocation.

Standing on the giant medallion engraved into the floor of Sunspire and lit by the sun, Salandra and I incanted "Sun join to Sun" in the words of the Ancients.

Light poured from our hands and bodies; the wind howled, and the machines groaned. A moment of electric energy raced across my skin and for a moment it felt as though sound had stopped, until a subtle shift in my mind snapped into place. A barrier I had not known existed, but once removed was unmistakably present, crumbled; Sound and light and *power* screamed back to life inside me.

The world itself shifted, askew no longer, but level as it had once been, as it should have been, settled comfortably back into being.

Every moment since I have felt a slow but steady flow of strength return to me emanating from the Sun's machines. Powerful as it is, I too feel chaos clouding its strength. What will occur once the growing chaos storm passes, I do not know.

But every day brings us closer to the Sun and I look forward to every moment.

Posted by Para at 11:37 PM
Phroon Advances to 7th Circle 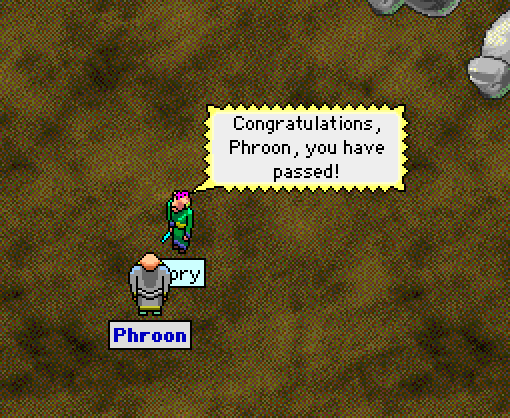