I came out of the library to see this assembly of dragons today.

Posted by Para at 07:49 PM
Sylvans at the Feast

Lundar and Anfyr have reports on the Feast of Tssrin on the ELF Blog.

A boar was found in Mai's Garden this morning.

Posted by Para at 08:46 AM
Undine Attack

Town is full of undine!

Posted by Para at 01:44 AM
Abyssal Hunters

Posted by Para at 10:10 PM
Costumes Are Available

The costume tent is northwest of Town Center.

"On Terrdi, day 36 of Winter, 556, a large group of healers gathered more or less by accident in response to a fallen or two at north farms. Led by Harper, we ended up on an impromptu healer hunt to Mid and South Pass, progressing fairly quickly from a mosey to a bit of a tight spot:

"and then to some wendie-bashing mayhem:

"All was well that ended well as several fighters and additional healers came to our rescue, and the healer rabble dispersed.

"Later that day, I got to make my first trip to Gungla Island with Clan Destine. I am still fairly new in the lands, and not very well travelled, especially when it comes to the other islands in our area. Led by Rhone and Sian, several of us (including myself, Sabine, Sim, Bakunan and Ootog) went exploring, eventually making our way to the GI Pit.

"The cave there was very, very busy:

"and our hunt/exploration turned into a gigantic rescue, with quite a few exiles joining the effort to clear the cave of cobras and other nasties and to heal the many fallens.

"In spite of all the falling (or maybe because of it?!?), a good time was had by all. Thanks to the many exiles who sailed over to help out. I really enjoyed seeing some new places and critters and earned good experience, too."

The Feast of Tssrin is coming.

Aravir reports in his most recent journal entries on crossbows, a new type of undine known as a curaitor, and a University of Puddleby trip to Dal'Noth with Lorikeet and Natas.

In his latest journal entry, Azriel reports on a pack of Midnight Wendeckas and on his discovery of a free range chicken.

Posted by Para at 05:42 PM
Lined Up Like Drakes in a Pond 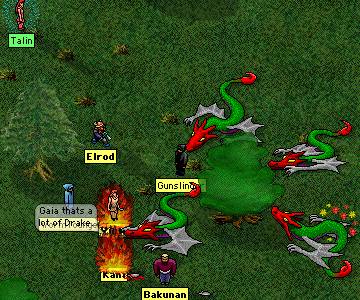 "Gunslinger alerted people to a single Forest Drake in Northwest Forest. I tagged along with him, Viola, Kani, Elrod, and Talin. The drake numbers were increasing faster than the others could take them out, often six at a time. The fight spilled east to North Forest. The last body count (by Kani) was 21 and rising. Several drakes had flown away, but more were showing up. I had to withdraw (i.e. run screaming away) during a calm moment, but the others (joined by Wormtongue and Cyrrhi) were headed back into the forest."

Posted by Para at 05:35 PM
Blaise Makes It to the Book 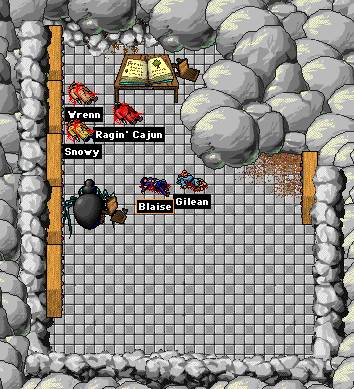 He also sent along the above image as proof that the Noids can get through the path.

Himitsu has published a guide to fishing at Eyes of Puddleby.

Xepel reports on his new xylo in the most recent entry on the ELF Blog.

Chaos Storm #360 has swept the Lok'Groton island chain. Please post any changes you have observed and wish to share with others in the comments. If you don't want to read possible spoilers, please do not read the comments.

Poesy reports in her latest journal entry on a bard challenge announced at the end of the recent bard concert. 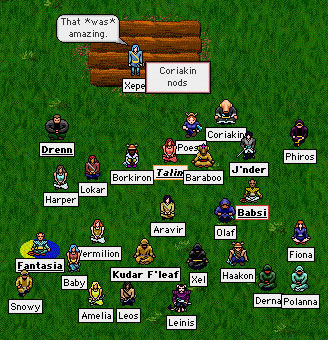 "I was lucky enough to be in town when a bards' concert was held in the Bards' Field.

It was excellent!, The highlight for me was Fantasia's performance of her own composition "Riding the Drake--Viola's song" accompanied by Phiros and Coriakin.

The concert was superbly MC'ed by Xepel; big thanks to all the performers!

They even played the duck song!" 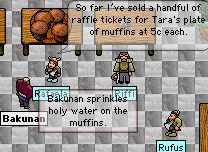 Poesy has moved her journal to a new format and location.

Posted by Para at 03:57 AM
Visiting the Foothills

Sielk reports on Sun Dragon Clan's trips to the Foothills in his most recent journal entry.

Posted by Para at 03:53 AM
Expedition to Hatreds Hollow

Check the University of Puddleby Class Schedule for more information.

Posted by Para at 11:18 PM
Portals and Foothills

Azriel has news of developments with the portals and in the Foothills in his most recent journal entry.

Drablak has written a new entry in his journal describing the chain of events that led to his role in helping with the exploration of the Foothills.

Anfyr and Kazik have posted meeting minutes for the October 3 and October 10 ELF meetings.

Feauial reports in his latest journal entry on a drake gathering near the Undine Hut.

Posted by Para at 11:06 AM
Chicken Hostage Situation

"Mreow! It seems someone is holding these chickens hostage, and despite valiant efforts of burning, we could not get the wall down. Super Chicken suggests a chickapult. If you have an idea for breaking down the wall and liberating the chickens, please post here. Bawk!

"Hobbes, vice-president of the Liberate the Chickens Disorganization"

Posted by Para at 10:28 AM
Silverback Wendecka

"I ran into this big sucker north of Midpass (where they throw rocks). It is called a Silverback Wendecka. I don't know if it is new or just extremely rare. It wasn't very hard to bring down, and I ended up skinning it for 17 coins."

Posted by Para at 10:16 AM
Malbec Promoted

"I am very happy to announce that some time ago Malbec was promoted to the rank of full mystic. Let us all congratulate him!"

An ex-rebel named Rimbaud wants to build a petting zoo. Read more in Azriel's journal and in Sielk's journal.

Chaos Storm #358 has swept the Lok'Groton island chain. Please post any changes you have observed and wish to share with others in the comments. If you don't want to read possible spoilers, please do not read the comments.

Posted by Kiriel at 03:21 PM
Rebels, Warlocks, and Pants

Azriel reports in his latest journal entry on the defeat of the rebel forces and on a trip to the Foothills.

Posted by Para at 12:23 AM
Rebels Defeated

"On behalf of the notorious anti-rebel group PTFF (Puddleby Task Force and Friends), I am glad to report that Phisney's Castle, formerly known as Tenebrion's Keep, has been rid of its rebellious squatters this day.

It has been several zodiacs now that rebels have been trying to hold and claim the whole island as their own. They even launched, with help from so-called Pirates, a quite ferocious assault on our town, which I heard was only repelled thanks to another cunning pirate trick.

I missed the event myself, but I was told that a rebel called Hari rebelled against the rebels and joined our side. Either from him or from hardy scouts, we learned that reinforcements would come with the approaching Chaos Storm, and that we would lose the island permanently if the keep was not reclaimed in time!
While this was not a very annoying threat, the prospect of more devastating invasions in Puddleby was quite worrying.

It seems that yesterday, a merry band led by the infamous Captain Stinkfist managed to make a dent in the rebels' defense before being blown apart (peaceful Flanders is put to blame, imagine that!).

When PTFF fighters jumped over the demesne's fence, they still found tough resistance and proceeded to wear the rebels down carefully. Mystic Raldin was called in to perform a few of soon-to-be-popular 'Flying Mystic Rescues.' Don't ask how they do that, but it's neat!

Eventually we were all able to stand in the yard outside the keep and fight down 3 of 4 dreaded Rebel Warlocks before yelling victory! From there we quickly scoured the keep, chasing rebels, stumbled up and down the tower and the basement, and checked the freezer and the zodiac maze. (Traveller's advisory: some guards who seem unreachable but should die of starvation soon are still lobbing boulders!).

Then we agreed to quickly tour the whole island, snell by snell, in search of the last rebels. A few were found, but they posed no real threat, and we left the island with the satisfaction to have done the most we could think of against rebels.

The island should now be safe (that is, normally dangerous) to enter from all sides, as well as the keep. All exiles are invited to keep the chase on so that there are really no rebels left to welcome reinforcements when the storm hits!

This sanitary task brought to you by Puddleby Task Force (and Friends)!"