ThoomCare Media Network
TMN: Thoom News You Can Use
Boats, Beer, and Bards 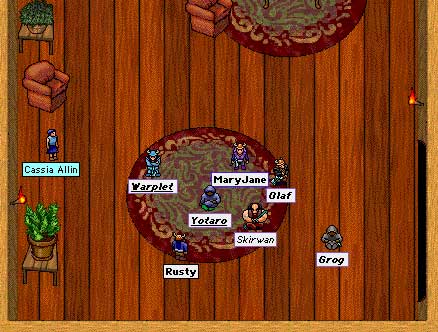 Dwarven Militia is sending out a reminder about our fabulous event called "Boats, Beer, and Bards." A fantastic boat race in the style of our old Volympic Days. The race will be followed by a party in the Bard Yard, where bards will be playing their submissions for the new DM drinking song. All the fun starts on Soldi, Day 55 of Summer 563 (OOC: July 30th, 2006 at 2PM PST).

Look below for map:

Posted by Para at 10:53 AM
Killer Kittens

The super-strong "killer kittens" made an appearance again today in Puddleby (Terrdi, day 31 of Summer, 563). I didn't witness any unusual activity, just a group of four of them stalking and killing rats and vermine. Yharren and I amused ourselves for a bit in luring prey for the kittens to kill, but after a while, they scattered.

The rest of the morning, I saw them moving all about town, sometimes singly and other times in groups of two or three.

Once again I wonder what this may portend!

Posted by Para at 09:05 AM
Captain Scabfoot 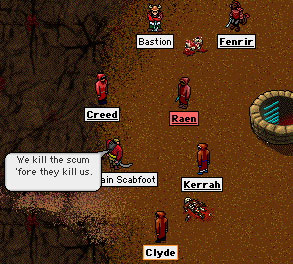 The other day, during our round of once-per-two-zodiacs Capture the Flag, we had an unexpected but friendly visitor from an island nearby join our match. Captain Scabfoot greeted us and understood our game within moments. Seeing as we had Kalian, Captain of the Navy around as well, we had our two Captains and a good pair of rounds to follow, Navy versus Darshak style.

Daimoth and the Captain made a wager of five kegs on the final round, which after a fulfilling flag-tagging session, Scabfoot won, in a pinch.

Before he could receive his victory beer, his crewmates saw him go to Puddleby Island. Misunderstanding the situation, they attacked Puddleby in a bid to kill the Captain. Several waves of Darshak stormed the beach. 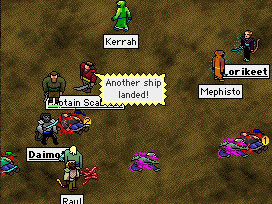 Puddleby's exiles successfully defended the town, as well as the now-exiled-himself Scabfoot. A Greater Death made an appearance as well, but with the Captain's help, it went down to defeat in Town Center. 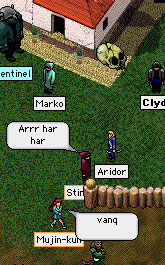 The Captain, while grateful, had no home to return to. The Pirate King and many others offered him several options, the most appealing of which appeared to be Balengil's land, up in the north. 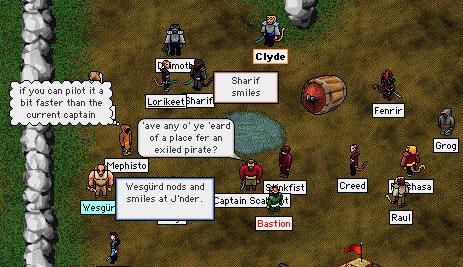 An escort of exiles brought the Captain to the grape farmer Gatsby. With a little persuading, the Captain was invited to stay for two zodiacs, so long as no trouble finds him. The Pirate King is encouraging others to make sure he feels welcome. Stop by the North Lake area and say hello. Best to be wary of any Darshak spies as well. If they find him out, they'll no doubt make every effort to ensure his demise. 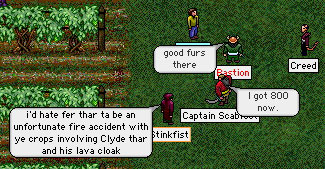 Posted by Para at 11:43 PM
More on Metzetli Island

I have, I believe, some of the very first sketches of Metzetli Islandthe new land that has appeared in the Northwestern Seas, south of Dal'Noth Isle. Soon after the recent chaos storm, I found myself with a large group of exiles exploring the new island, gasping in awe at some of the beautiful scenery as well as the incredible strength and power of new creatures.

These sketches were made on the run, so please forgive if they are a bit shaky. In them, you can see a large group of exiles surrounding one of the more fearsome new felines, called a Haremau. Also note the edge of some basalt rocks, which produce Basalt Greymyr, and a Gloaming Wendecka just at the edge of a snell.

Even though we had to depart, since at the time we didn't know the way off the island, the group had an excellent time, or at least I did! It's very exciting to have new snells to explore!

Posted by Para at 12:05 AM
Metzetli Island 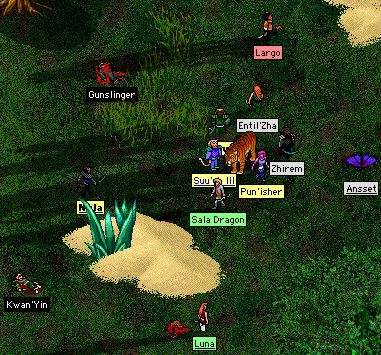 Raul reports in his most recent journal entry on the recently discovered Metzetli Island. 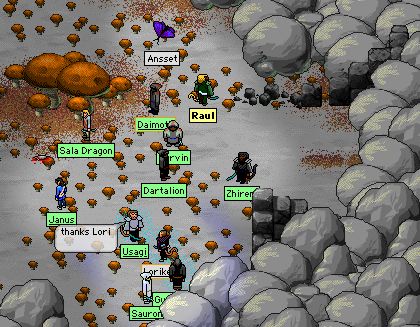 Just one of my random, possibly entertaining, possibly not sketches from Town Center: Satris was showing off his morphing skill to the mixed reactions of various exiles.

Chaos Storm #451 has swept the Lok'Groton island chain. Please post any changes you have observed and wish to share with others in the comments. If you don't want to read possible spoilers, please do not read the comments.

The upgrades and improvements to TMN are going to take a little longer than I originally planned. Besides that, this heat makes it hard for Thooms to concentrate. I'm going to return to normal postings here for now, and keep working on "TMN 2.0" behind the scenes on my test server.

I'm working on some possible upgrades to TMN at present. Updates may be a little less frequent than usual over the next few days. Thanks.

A few days ago in Town Center, Dinsdale, who was quoted by eyewitnesses as saying he was "just feeling silly," first gave away nearly every one of his possessionsthen attempted to set fire to the free library! Fortunately it wasn't flammablebut he created quite a spectacle just the same.

Eyewitnesses also said they believed the attempt was not particularly serious.

Posted by Para at 10:50 PM
Fireworks in Puddleby

A few days ago, the gods put on a mysterious light show in town, just north of the temple. As you can see by the attached sketches, the gods had quite a bit of fun at the exiles' expense!

I heard whispers that the lightning display had something to do with some sort of foreign holiday, an independence day perhapsbut there was not much more information to be gleaned.

It was fun to watch, however!

It seems like just about every exile in the lands was out of the library at some point for the great battle against an Abyss 2 incursion into our fair town.

Just in case someone managed to miss it, I offer these sketches that show the ethereal cloud as it encroached upon east town, filled with icy creatures from the Abyss.

A week ago we reached PC16 and found that the blue mushrooms dropped "azure spores". Two were found but we have yet to find any use for them. If you have any ideas, please let us know! The last time we reached the mushrooms nothing was found, so perhaps we have contaminated the 'shrooms and now they drop spores, or something like that.

More news as and when we find it.

Chaos Storm #449 has swept the Lok'Groton island chain. Please post any changes you have observed and wish to share with others in the comments. If you don't want to read possible spoilers, please do not read the comments.

Posted by Para at 07:20 AM
Daimoth the Dainty

Daimoth recently quit hunting lyfes for a few minutes to prance through the fields and smell the flowers.

You heard it from me first.

Posted by Para at 10:52 PM
Puddleby Under Assault by Noids

Puddleby was invaded today by a large and powerful force of Noids. Exiles repelled the invasion after a series of battles. 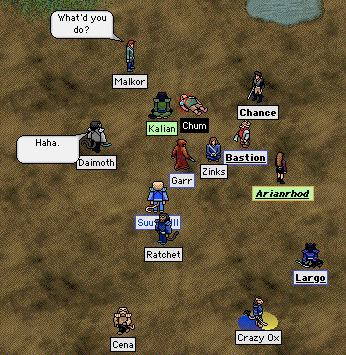 I made these sketches several days ago, now, but I thought they might still be amusing to some exiles! I was just pausing in Town Center recently when Kalian happened to walk into town . . . with Chum on his chain! 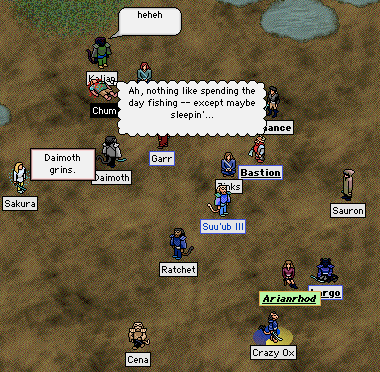 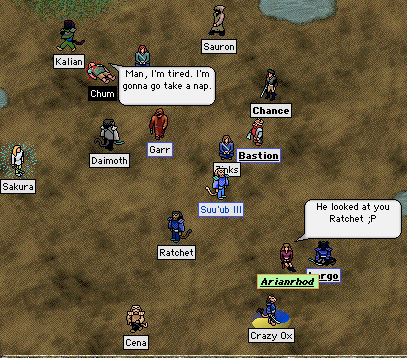 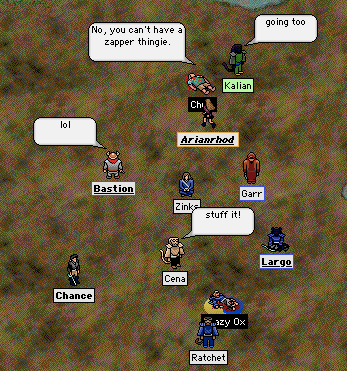 As you can see, Chum was mostly his usual oblivious self, except for one sharp comment about . . . a zapper thingie? I'm not sure what that was all about! Anyway, Kalian actually tried to get Chum's corpse stuffed, but as you can see it wasn't happening. 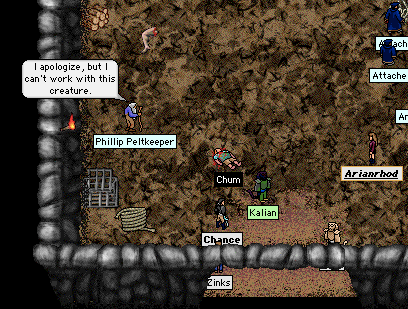 Unfortunately I don't know the end of the story. How did Chum get raised? Or did he? Does Kalian have him tucked away somewhere? Is he in Storoenna's cave? Inquiring minds want to know! 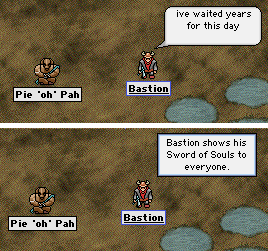 I thought I'd submit this bit of news on behalf of Bastion, who achieved a major goal recently.

Congratulations to Bastion on finally getting his Sword of Souls!

Posted by Para at 10:44 AM
Polerand Not On a Recent Valley Hunt 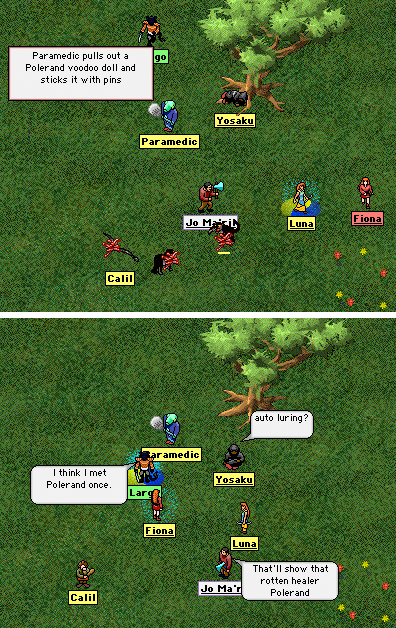 As seen above, Valley hunters noted the absence of Polerand in their party. 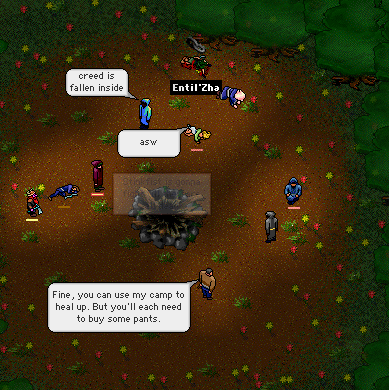 In an interesting twist, the blue pants merchant turned out to be an excellent tactical retreat location in a recent hubbub at the arachne cavern to the north of 'noids. However, there was a price to pay for its convenience.

The cause for this need was because of a summoning experience gone awry, in which apparently dozens of arachne muted into much stronger variants. I felt a dark presence deep in the cavern, where we found a Dark Recluse spider. The creature was very strong, and took several dozen exiles several puddlehours to whittle down, until it finally emerged from the cavern and a stable rod working in conjunction with strong fighters managed to fell the beast, with notable appearances made by Captain Stinkfist, Entil'Zha, and other members of the Pirate crew.

Regrettably, I did not take any snapshots of the monsters themselves, but my hours of work and excitement were enjoyed by a large group of exiles. Be wary of traveling alone in that area in the near future, lest you fall prey to their webs! 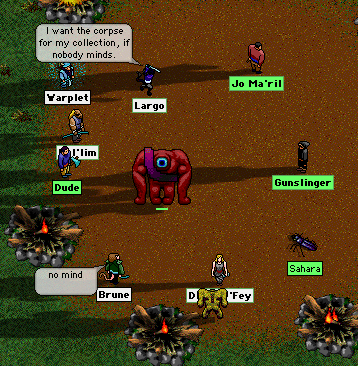 While engaging in a rescue in the Orga Camp, we came across the biggest orga I have ever seen! Largo hoped to make a trophy of it, but sadly he was unable to chain it.

After killing the creature, we learned it was a "Deathlock."

Curiously, the other orga in the camp seemed more powerful than usual, and I wonder if the Deathlock somehow boosted the strength of its kindred orgas.

Please beware that the Orga Camp may be more dangerous than usual these days! 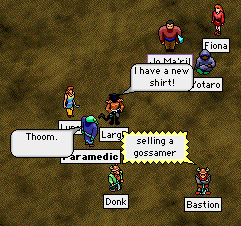