Lily Fren reports in her most recent journal entry on the Hel Tree Order's Inaugural Expedition.

And What A New Day It Was!

Posted by Para at 07:44 AM
Clanning Updated 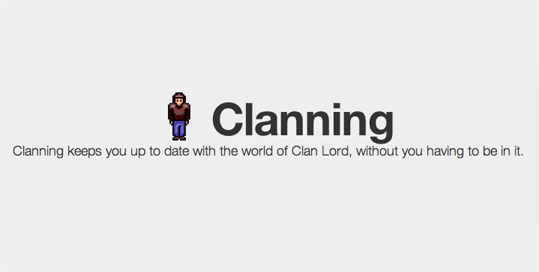 Clanning has been updated to version 1.1, and a simplified version is now available for Snow Leopard.

Lily Fren reports in her most recent journal entry on the founding of Hel Tree Order and the upcoming Inaugural Expedition.

(Lily has a great journal; my apologies for not linking to it earlier. If there are other resources out there that TMN is not covering adequately, please just let me know. I have added Lily's journal to the Favorites button array.) 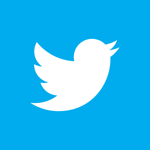 Posted by Para at 09:21 AM
Hel Tree Order Inaugural Hunt

Drablak sent TMN the following announcement of the first expedition of the Hel Tree Order:

If you're interested, we're doing an Inaugural Hunt: Sunday June 24, 6:00pm Eastern for the Hel Tree Order clan. Everyone welcome!

Posted by Para at 08:15 AM
Hel Tree Order: A New Clan in Puddleby

I hope you are well. An item of news for you: the Hel Tree Order clan was founded recently. I have a journal entry about the founding of the clan.

My scrolls have moved also, in the same area of the library. 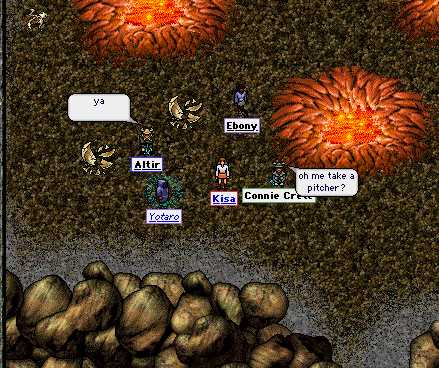 So we had a mosey tha other night. Me and Eb be tha regular FB folks, but Yot and Altir is comin sumtimes. Also Kisa were able ta make it which were great!

We started out with earthwurms and as there weren't so many o them ranneed out o critters after about 40 minutes. So we went ta Melly's house lookin fer a rock causn Altir wants tha ring and Kisa wants tha shieldstone necklace Hoggle says ya kin make with tha ruby necklace. Anyways, no joy there.

Then we pergressed on ta toks. I figgured we could play until sumbudy got kilt too daid, but Kisa and Yot has solid horus. We ended up makin it allway ta tha tok nest and gitn tha black viper one daid. I dont general take pitchers durin tha action causn Ima concentratin on not spillin beer.

Afterwards, we moseyed home and had a good evenin.

Clanning is a new OS X app that keeps you up to date with who's clanning, similiar to Skirwan's iClan.

Chaos Storm #759 has swept the Lok'Groton island chain. Please post any changes you have observed and wish to share with others in the comments. If you don't want to read possible spoilers, please do not read any further!

* No crashes in 555 days and counting. The record is 723 days.
* Youll have to explore to find the rest of this storms changes. 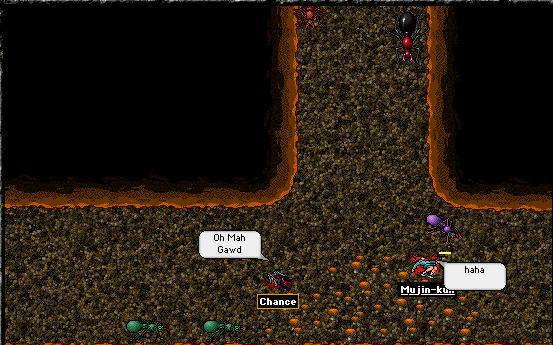 Paramedic, I have managed to capture a sketch that shows something few exiles have ever seen.

Posted by Para at 11:12 AM
Creed Reports on the Trip to Trillbane

I enjoyed reading the various reports about our recent trip to visit Master Trillbane, as well as our assault on Bartok's village and meeting with Bartok himself. It was all very interesting. I truly enjoyed getting to listen to Master Trillbane himself speak. We begged him to visit our town sometime, to make it easier on those who wish to study with him. He actually seemed to be at least considering it, asking a few questions about the state of our libraries.

He also told us that Bartok has been setting booby-traps for him, making it different for him to travel and to study his craft. Needless to say, this is troublesome to anyone who wishes to improve his or her study of Pathfinding! Being the rather . . . aggressive group that exiles are, we decided to bring the fight to Bartok as documented by your other correspondents.

Most of the sketches I made of the battle are similar to what you already have, but I wanted to share a few more from the battle's aftermath, when a few of us were unfortunately fallen and had to endure Bartok's taunting. I have to admit that, still in the heat of battle, I started a bit of a "war of words" with the evil creature. I told him I was ugly, but he retorted I was uglier, with soft fur instead of spikes. Bartok admired Ustral's horned helmet then made sure to taunt us about the fact he was still alive while we were dead. When he began threatening to cook us we took our leave.

But, in a final act of defiance, Bartok later sent an Orga right into town with a "submission" for the new publication, calling it a "Fazion Daylee" ... that fur is "owt," and spikes are in! And he delivered this article right while I stood there! Orga . . . brazen indeed . . .

Posted by Para at 10:33 AM
Shadowcats and Lowland Panthers

I'd like to share two items with you. One was a very small item of celebration. We all know how much fun the NNK clan has in trumpeting their numbers. Well, the other day, for a few minutes, the Order of the Mini outnumbered NNK in the lands! :-) We had a little bit of fun with it. 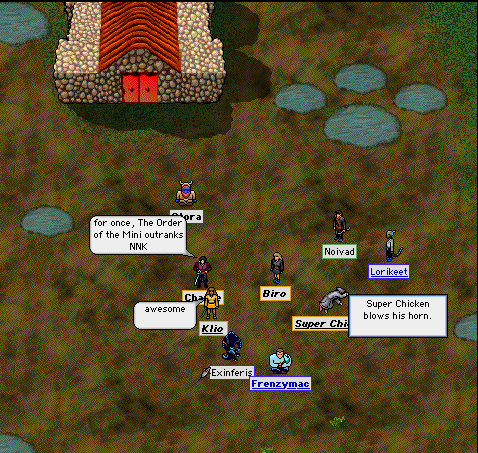 The second item is just a few sketches from the estuary, where I was able to join a hunt with Tabatha, Mujin-kun and several other exiles. We found ourselves battling Shadowcats, but then there were similar-looking cats that were much stronger. We were battling Shadowcat Prowlers, and then, a Shadowcat Warqueen appeared. At one point, when we killed one of her warriors, our own gods asked whether we were savages!

We learned that an even larger breed of black cat, the Lowland Panther, is devouring all of the food the Shadowcats usually eat. Although this is troubling, we felt we couldn't just stand back and let Lowland Panthers OR Shadowcats simply cut us down. Perhaps in time we will find the lair all of this trouble stems from. 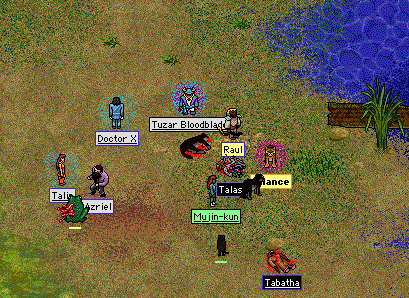 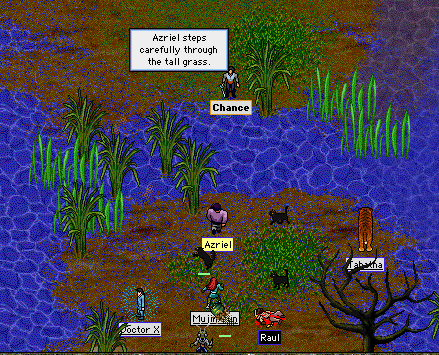 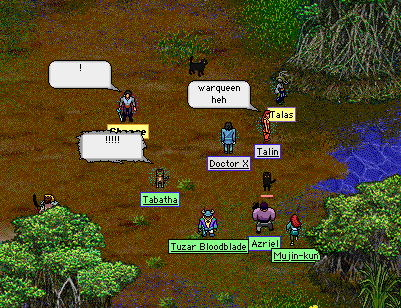 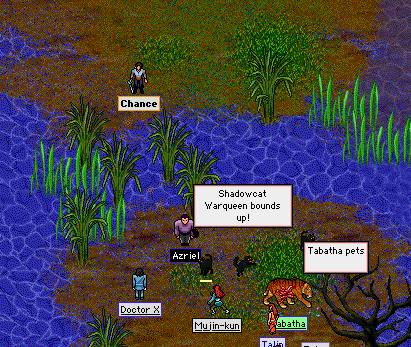 Posted by Para at 03:16 AM
The Return of Bartok 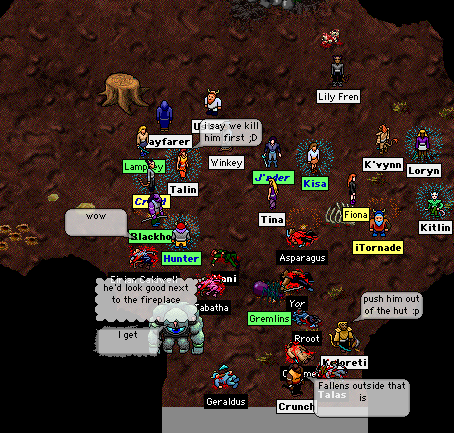 My aforementioned jaunt through the Orga Stronghold was indeed explosive. Our entry through what we call the Front Door was met with heavy resistance. After several retreats, we were able to push our way through to the next snell where we encountered an oddity. The Orga had arranged a circle of campfires where shamans were busy working with some kind of magic. Despite this suspicious activity, the remainder of our path towards Trillbane seemed normal and we advanced without much difficulty. 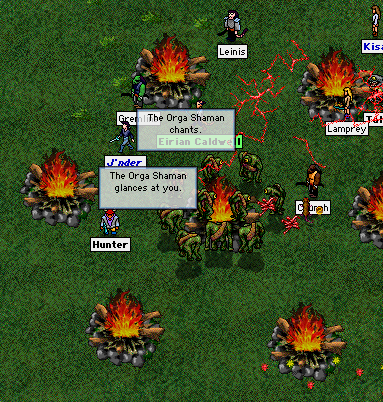 Trillbane greeted my merry band and was happy to have many new students. He was talkative, revealing that Giayl is more knowledgeable than him and hinting at an old relationship between them, though he doesn't know where she is now. He's kept busy collecting books and claimed that every book on the island had, at one time, been in his library. Some in the group tried to persuade him to return with us to Puddleby, but he again scoffed at our library. One of his tomes happened to fall into Rroot's pack and is being investigated by top men.

As we were about to leave, Trillbane warned us that the Orga had summoned a new god who had been setting traps and harassing him. Meet their new god, Bartok, same as their old god. This fellow simply refuses to retire peacefully. Either that or perhaps the Orga's book of baby names is somewhat limited. Just as Trillbane mentioned that Bartok spends all his time counting treasure, we, unrelated to that information, realized that we should get moving and hurried towards the heavily fortified region of the Stronghold. 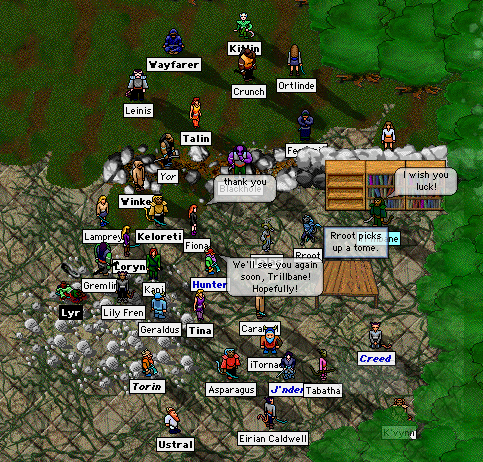 Upon entering, we found Bartok waiting for us atop a ridge behind spiked barricades. He toyed with us throughout the battle, slaying exiles with ease and laughing at our efforts. His minions, meanwhile, appeared to be quite concerned, at times surrounding him in protection. In the face of the Orga's fire and lightning barrage, we eventually cleared much of the fort and made our stand inside his massive skull-adorned hut. Although we severely wounded him, he skillfully picked our fighters off and left us too vulnerable to survive a retreat. 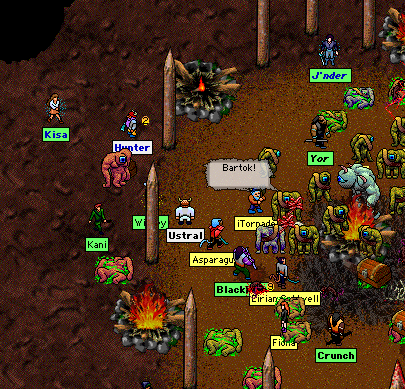 We returned home through Purgatory without any treasure, yet it was a glorious fight. Be alert, as Bartok's return could signal renewed hostilities with the Orga. Their activities should also be investigated further. As for future ventures into the Stronghold, soon we'll have more pathfinders hoping to reach Trillbane and we now have another catapult part to give to Katpus. So we will be back, seeking revenge and Bartok's head. 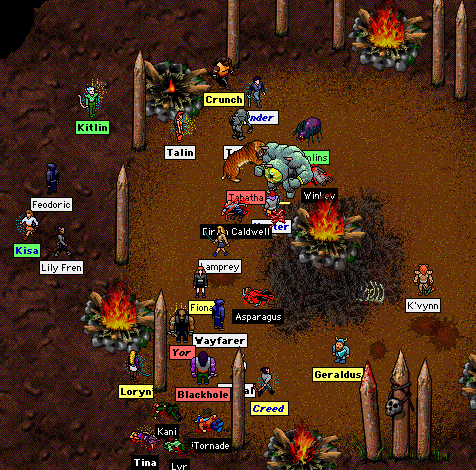 Ber, and congratulations on your decade of publications!