ThoomCare Media Network
TMN: Still Thoomin' After All These Years
Largo Reports on the Bard Concert 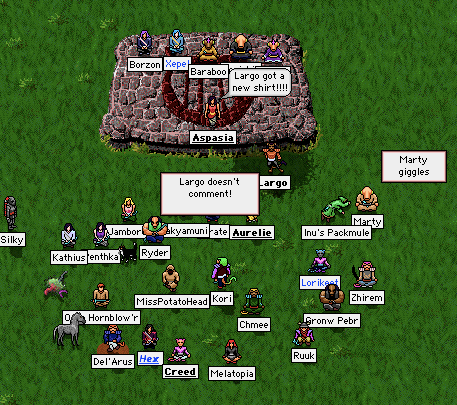 Another bard concert has come and gone!

Though the competition from Borzon, Xepel, Coriakin, and Nippy was fierce, Aspasia won Snacks composition contest with her excellent piece "Historical Importance, a chronicle of the fateful day 56 years ago that I got a new shirt.

Pirate has archived visionstones of the entire concert on The Puddleby Listener. 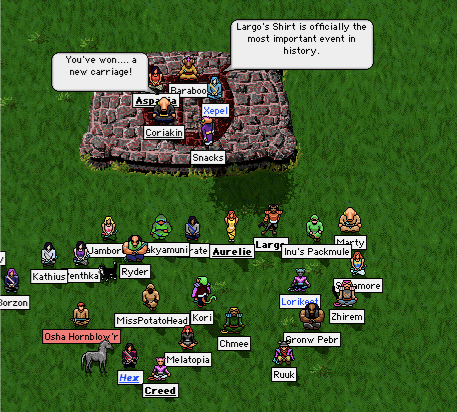 "Xepel is forced to admit the truth" Largo

As winner of Snacks competition, Aspasia will judge the next contest and has chosen its theme. Via Koppi: "Submissions must be a solo, duet, or trio inspired by the Feast of Tsrinn. Bonus points will be given for songs with lyrics!"

The next bard concert will be held at the Puddleby Playhouse in west town on OOC October 25 at 9PM Eastern; 6PM Pacific; 1AM GMT. Attendees are encouraged to wear a costume.

Posted by Para at 10:45 AM
Bard Concert Time

The next Bard Concert is scheduled for:

Posted by Para at 08:10 AM
Exiles Remembered 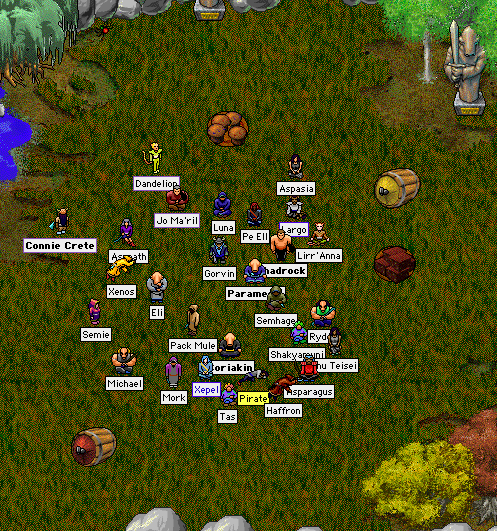 Exiles gather in memory of those who have passed

Thanks to Dandelion and Largo for organizing the Memorial Gathering.

Posted by Para at 09:10 AM
Memorial Garden Gathering

Tomorrow marks 15 years since Tyndall's passing. He was loved very much in life, and his memory is kept close and cherished by many.

The years have also taken at least four other beloved members of our community from us: Baffina/Baffette, the indomitable orga slayers; Tonoto, whose maps still guide us; Eyeball, who was kindhearted and funny; K'pyn, the warrior thoom without compare.

Dandelion has called for us to come together in the Memorial Garden to celebrate the lives of these departed friends and loved ones [OOC: on Wednesday, 9/23  8pm Mountain/7pm Pacific/10pm Eastern/2am GMT]. All are welcome. Please bring whiskey, cigars, beer, and logs for fires if you can.

If you knew or hunted with Tyndall, Baffina/Baffette, Tonoto, Eyeball, or K'pyn, you are strongly encouraged to attend and share your memories. If you are grieving someone from outside the lands, know that this is a space where you can hold that in community. If you would like to show love and friendship to exiles who have lost beloved people, know that your presence will do that.

We realize that this is coming together on very short notice. You can help by taking a moment to use the communication avenues available to you to reach out to folks who you think would be interested in coming but won't be reached by these posts because they are currently disengaged from Clan Lord and/or social media. Thank you!

Posted by Para at 05:47 PM
The Remudification of Puddleby Has Begun

image courtesy of Largo on Discord

Posted by Para at 10:00 PM
Coriakin on Music

Coriakin has created some resources for learning about music in Clan Lord.

Posted by Para at 07:27 AM
Orienting a Large Shipment of New Exiles

I am writing to report that an unusually large shipment of completely new exiles recently came in from the mainland. I had anticipated some of themRhapsody, Morgician, Stinker, Calaye, Rota, Radianne, Crysanthe, Camio Stolas, and Neemthrough the word of a contact I have at the docks. Also in attendance were HighSens and Smithers.

We set out with a very ambitious itinerary in hand to orient the baby exiles, taking them first to the Puddleby underground (where we became split up and joyously lost until Kvynn came and rescued us all with his mystic powers), then to the University to meet Boostus. At this point we ditched the ambitious itinerary and went straight to West Ash to fight Darshak in the horde and bell tower. After that, we landed in town to get drunk and help the babies choose their professionscongratulations to our newest healer, Rhapsody, and to our newest fightersNeem, Morgician, Stinker, Rota, and Radianne. After that, we continued to hunt and party for several hours.

Many of uswith apologies, too many to name in fullworked hard to help orient the new exiles on Puddlebean life. Special thanks go to Kvynn, for providing all the baby exiles with sunstones, to Dandelion and Lorikeet for serving as designated top-level shepherds for the whole ordeal, to Haffron for helping me plan, and to Snacks, Rakshasa, Xepel, and Coriakin for cooperating to provide music throughout.

Special thanks also to Pirate the Bloodmage, who took a visionstone of the whole endeavor and has posted it in the library for anyone who wants to enjoy it.

Readers of TMNif you see any of these new exiles in the lands (some of them have been back around), please take care to be extra friendly to them!

Posted by Para at 11:18 PM
They Paved Paradise?

Posted by Para at 09:50 PM
Largo's Resignation: The Fallout 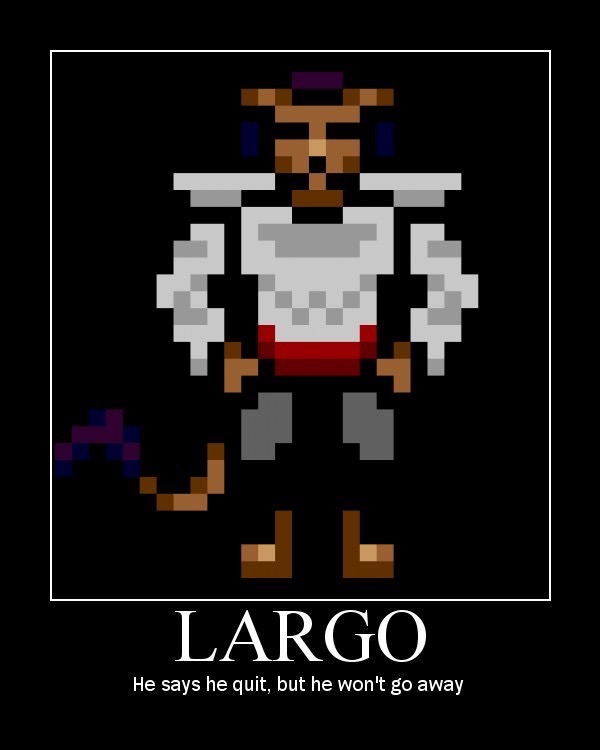 I've been investigating Largo's resignation and interviewing exiles about town about the future of the Fen Presidency. I will continue to monitor this situation as it develops, so please consider this piece the first in a limited series about the fen presidency.

As a non-partisan journalist, I recognize my obligation to serve as a watchdog over public affairs and government. I have endeavored to keep my reporting on this matter fair and accurate. I know that inexpensive widespread visionstone technology has made times tough for print media in the Lok'Groton, so I am willing to waive my fee in this instance.

As regular readers of ThoomCare already know, Former Fen President Largo recently resigned after a storied 49-year term to 'make way for new leadership'. In response to queries from ThoomCare, KPUN, and SNN reporters, Largo expressed his commitment to the peaceful transition of power, but declined to immediately name a successor candidate to represent the Largocratic party in the next election. Largo stated that he intended to remain in the lands "as a friend, not a leader," which sources on the scene described as 'gratuitous pandering'.

Immediately before his resignation, former Fen President Largo decreed that candidacy for the position of Fen President shall no longer be restricted to Fen'neko. While this decree implies that candidacy for the office of Fen President has heretofore been restricted to fen'neko, public record clearly indicates that this is not the case. While only fen'neko have ever been elected to the office, both Stylunk (a ghorak zo) and Phineas/Fen-eas (an ostensible human) have all made their way onto past ballots through legitimate means.

It is unclear at press time whether Largo's move was the result of ham-fisted misdirection, well-intentioned incompetence, or bad information from an advisor. 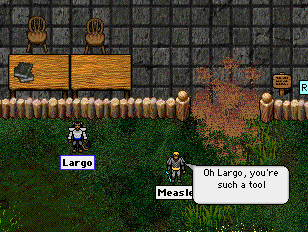 Largo's office did not respond to our request for comment, but this reporter was able to track Largo down in town center shortly before a recent Connie mosey. His hair was immaculate, and he was wearing a handsome but subdued maha pelt shirt. When pressed on the matter of his pointless and potentially obfuscatory decree, Largo flashed an angelic smile and made direct eye contact: "Sorry, I'm afraid I don't know what you're talking about Who do you work for, again? Are you with Skirwan?"

In this reporter's entirely subjective estimation, he probably did know what I was talking about.

Regardless of the reasoning behind the decree, many exiles  especially Largocratic loyalists  have cheered the move. Inu Teisei, an exile of both sylvan and fen'neko descent who ran against Largo during the election of 572 but claims to have voted for him anyway, was thrilled at the opportunity to extend her family's political influence: "I love it  I always wondered why it was limited to just fen, so I think it's about time. I have nominated Pun'isher (to no one)." Again, the Office of Fen President has never been restricted to fen'neko.

Kitlin, a fen'neko healer and long-term Puddleby resident, offered a diplomatic perspective on the matter, emphasizing the dual importance of inclusivity and of representing fen'neko cultural experiences in Puddleby's anarchic and occasionally oblique power structure. "While it is encouraging to open the candidacy to others, I do not see how one can be a fen president without being fen. [However,] good Mr. Kensington is a thoom raised by fen. I can imagine him qualifying for being a fen president though not being fen."

Representatives from the Orga Camp, of course, have responded to the power vacuum created by Largo's resignation with calls for a Bartok candidacy. Most of the exiles I've been able to interview about this matter have been unequivocally against such a candidacy. For her part, Inu Teisei says she 'would not' support Bartok in a bid for the fen presidency, on the grounds that 'orga are just plain mean.'

Pirate, a sylvan fighter and self-described 'ally to all fens' was initially lukewarm on the idea: "if he had everyone's interests in mind, fens forward, I think he would be good." When reminded that Bartok is the Orga general who once stole Puddleby's altar and is ascendant once again after being presumed dead for many years, Pirate furrowed his brown and changed his tune: "Oh! No, that sounds terrible."

If not Bartok, though, then who? For now, Largo's untimely resignation has elevated Relkin to the office of Fen President. Relkin, in good keeping with Presidential tradition, is currently MIA. Informal non-orga nominations for candidates in the upcoming election abound in the lands. Some names that this reporter has heard floated include Zhirem, Dandelion, Coldy, Pun'isher, and D'ead  an unusually friendly group of contenders, to be sure.

With the exception of Bartok, this may be the most amicable and least contentious race in Puddlebean history.

More as this story develops.

Chaos Storm #1188 has swept the Lok'Groton island chain. Please post any changes you have observed and wish to share with others in the comments.