ELF has announced the details of their upcoming skinning contest.

Thanks to Sasha for sending news of the announcement to TMN.

Puddleby is presently crippled by attacks from a vicious and powerful Greater Turkey. Victims are receiving help in the Temple.

Update: SnowLion struck the final blow and killed the Greater Turkey. Chef Haricot showed up and said the turkey will be prepared in two hours. He never showed up with the cooked bird though.

Posted by Para at 05:33 PM
Hunting at the Rocky Cavern

"I recently had a great hunt in the Rocky Cavern with Tayrn and company. We kudzued the sun wyrm into a corner, while we took care of the blood wyrms and grey wyrms, and then set about using fallens for a wall to trap the sun wyrm in a space so we could kill it. It was lots of work, but we had a great time, and thank goodness for lucky hits, because I got a vanquish on the sun wyrm!"

In her latest journal entry, Himitsu wonders about the number of full mystics who still routinely leave the library, takes a look back at the evolution of Eyes of Puddleby, and reports on her mind training. In the comments to this entry, Xepel has some interesting things to say about the Bard's Guild and the Bard Council.

Azriel reports on a daring adventure to the Pitch Cavern just before the onset of a chaos storm. He also confirms those reports that Crimson Noids have been entering the ruined library there.

J'nder sent this report to TMN:

"Champion items seem to be working. Viola tested her lava cloak in the vermine den and her stone girdle on Melabrion's Island. The lava cloak let off a burst of fire which toasted all the vermine surrounding Viola. Some died, many were injured.

"Mad Mark was turning to stone in town as well!"

Posted by Para at 10:27 AM
Fen President Polling Begins

It's once again time for exiles to cast their ballots for Fen President. As with the last election, the stakes will be high and the campaigning fierce for this ill-defined office with no clearly determined duties, obligations, or responsibilities. This year's nominees include:

Lorikeet (member of a clan that submitted a "Find the Exiles" picture to TMN and then failed to follow through with an answer; well regarded otherwise)

Manx (the leading candidate last year, until the mysterious Fen named "None of the above" swept in with a surprise victory)

Polerand (he's not dead, as long as we remember him)

Polling will open soon! As the Zo say, "Vote early, vote often, and hurt those who disagree with you!"

Fundin has announced the details of his next scheduled Foothills trip.

The region of town in the fairgrounds known as Agratis is now gone.

Chaos Storm #313 has swept the Lok'Groton island chain. Please post any changes you have observed and wish to share with others in the comments. If you don't want to read possible spoilers, please do not read the comments.

Posted by Kiriel at 10:55 AM
Healing Convention

TMN received this message from Shakyamuni:

"Here's a shot of the healer convention it took to raise Dani Diuberr after a rough trip to the Alchemist Folly. All this horus in one place, and it still took awhile to get her up."

Posted by Para at 06:28 PM
Shipwrecks and Circle Tests 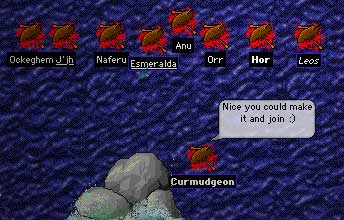 Hor reports in his latest journal entry on trouble at sea, action in the lily pond, and passing the 4th circle fighters' test. 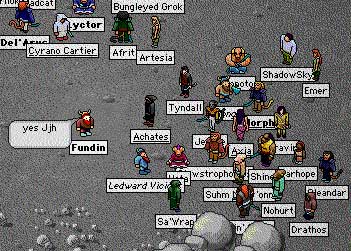 Now available: a report on the most recent Weekend Foothills trip organized by Fundin.

Fundin tells TMN that details on the next trip will be available soon.

Posted by Para at 11:51 AM
Norm Goes Rock Hunting

In his journal entry for 71 Spring 552 (11/22/03), Norm reports on traveling via the portals and on having some good luck while gathering ore.

Posted by Para at 11:39 AM
Aravir Advances

Aravir reports that he has passed the second circle fighters' test in his latest journal entry.

Posted by Para at 11:30 AM
Rising Claw Scrolls Moving

Odesseus reports that Rising Claw's scrolls (http://www.risingclaw.com) are moving and are temporarily down, but will be back up soon.

Posted by Para at 03:28 AM
Aravir Visits the Foothills

In his latest journal entry, Aravir reports on travelling to the Foothills with the recent expedition organized by Fundin.

From Azriel's latest journal entry: Newton has passed the fifth circle fighter's test, and various exiles have reported that an arachnoid was waiting for them in the Foothills library.

Farhope and the Winds of Dawn clan are organizing a Spring Farms Cleaning Hunt.

Says Farhope: "It's time to show again to the farmers that we support them ... and to the vermines that we will kill them all when they dare to invade our farms." 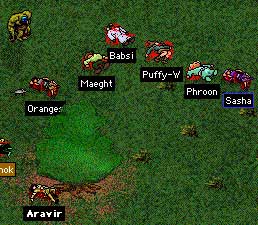 Aravir reports on exiles battling against an Orga invasion force in his latest journal entry. 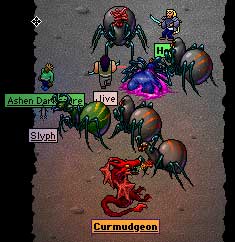 Hor reports on the recent feast of Tsrrin in his latest journal entry. 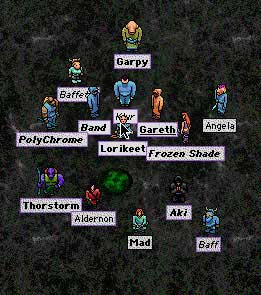 Anyone willing to hazard a guess where these exiles are?

Posted by Para at 08:01 AM
Clan Lord Sentinel

Don't forget: you can find some of the best Clan Lord conversations and debate at the Clan Lord Sentinel forum.

Drablak reports in his most recent journal entry on receiving a Portal Key from Lundar and a Pass Key from Neige.

Version 311 of the OpenGL Clan Lord Client is available for use. Please be aware that it is beta software, and that the user assumes all risk. Also, as with any volunteer effort, there's no guarantee it will always be available. Many clanners use it and are quite happy with it. If you have reports on using the OpenGL Clan Lord Client, feel free to leave them here in the Comments.

Posted by Para at 11:28 AM
Bawkmas Play Production

Himitsu has news about Super Chicken informing her of the upcoming Bawkmas play in her latest journal entry. Himitsu has also provided a report on the most recent chaos storm at Eyes of Puddleby.

Aravir's latest journal entry reports that Pel has spotted a path through the Voolcon's wall on Devil's Island.

Posted by Para at 10:55 AM
Azriel Meets Lavo Stonetailor

In his latest journal entry, Azriel reports on meeting Lavo Stonetailor, discovering an interesting trail covered with heavy underbrush, and finding some Darkite. 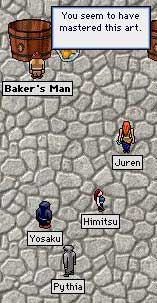 Super Chicken reports to TMN that the Vinery is open.

Chaos Storm #311 has swept the Lok'Groton island chain. Please post any changes you have observed and wish to share with others in the comments. If you don't want to read possible spoilers, please do not read the comments.

Posted by Kiriel at 11:27 AM
Feast Info and Drama Contemplation

Himitsu has put a new entry on the Feast of Tssrin at Eyes of Puddleby. In her most recent journal entry, she contemplates working on a play.

Posted by Para at 10:03 PM
Portals and Chains

Aravir reports in his latest journal entry on some unfortunate chain-breaking incidents while recently moving one of the portals. 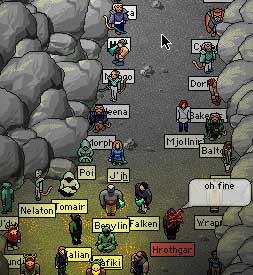 Hor has a report on Foothills Trip #3 and on a rescue in Melabrion's Mines in his latest journal entry.

"Elenis will be leading. It will take place on Sunday, November 16, 2003. We will meet in the town center 10 minutes beforehand, and we will leave as promptly as we can. This might change, so please hang around town until I sunstone an announcement. I don't know if we will port (mystic) or take the long route in yet.

Anyone with any tactical ideas please mail me; we're always open to suggestions!"

Posted by Para at 04:26 PM
Norm Reports on the Feast

Azriel's been hunting some "Big Red Critters." Read more about it in his latest journal entry.

I'm still here. There just hasn't been much news lately, and there have been few journal updates to post. It's usually quiet for a while after Tsrrin.

K'Pyn and HGM have had some interesting and well-reasoned discussions on the portals on USENET.

I've added info on the IRC chatroom: #Clanlord to the right-hand column. #Clanlord is a good place to check if you're having trouble reaching the Clan Lord server, as happened a few weeks back for most people.

Does anyone have any information on what happened to Iho and the Court Archives?

Tsrrin, of course, is over. Here's a couple more pictures I have handy: 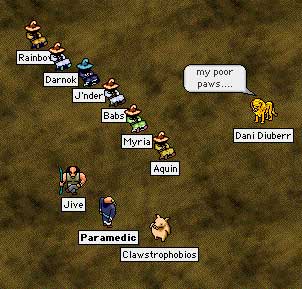 A sombrero-line and a maha with pooped paws 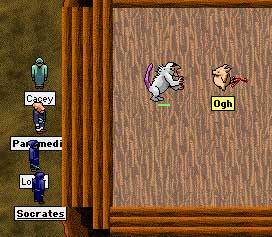 Pig vs. wendecka: an epic struggle

Eldon GM held a GM chat recently in the Fairgrounds. The transcripts I have come across have been too long and unwieldy to edit and post, unfortunately. He reported progress on some new areas he is working on, and he listened to an airing of views from various exiles regarding portals. Perhaps some other exiles might mention other highlights in the comments. On Clan Lord Sentinel, you can read about what Ann GM and Eldon GM are working on in this message thread.

Other recent topics on the Sentinel:
Dopplegangers in the Arena (an idea HGM mentioned on USENET that I find very interesting)
Monster AI (this came up in the Eldon GM chat, with regard to Rodan panthers)
Ann's World Library idea
Jury sizes
OS X text window problems (I have this problem with the client myself)

ELF is planning a skinning contest. More details will be forthcoming.

Finally, I'm working on setting up some sort of sideblog or forum to facilitate bringing together Clan Lord players who are interested in joining up to play Neverwinter Nights. I hope to announce something soon.

Posted by Para at 12:09 AM
Himitsu's Language Ledger

Himitsu tells of acquiring a language ledger in her most recent journal entry. 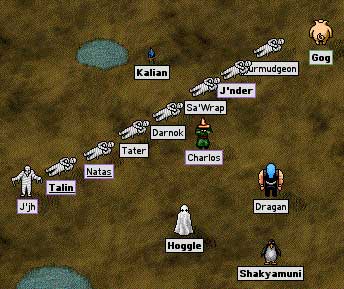 "Heya Para, Shakyamuni here . . . just wanted to submit some pictures of Algy in action helping to save the town from the death bunnies at North Gate. Also included is a mummy conga line, and a picture of the group trying to kill the two bunnies at the gate, and a picture of Algy, Pazuzu, and I asking if the pig costume makes our butts look fat. General Tsrrin mayhem and fun was had by all. What I unfortunately don't have pictures of is Sephi, Kryll, and Thwack being zombied and the insanity of trying to kill them without dying ourselves."

Azriel has a full report on the undine invasion associated with the Feast of Tsrrin, as well as on the new pathway discovered in Elendil's tree in the Meadow.

Himitsu tells of the feast days as well as her latest progress in training in her latest journal entry.

Philo has an extensive report on the Feast and the Death Bunny assault on Puddleby.

Mani reports on bunnies and undine in his most recent journal entry.