The Pirate King announces the Pirates of Lok'Groton are to "aggressively negotiate" with Penn Venables.

He calls upon all pirates and pirate friendly exiles to come help persuade Penn to see things his way.

Time: sometime around Lundi, the 61st Day of Summer 571, at midnight (OOC: July 9th). More details to come as they are available.

Place: Gather at the docks

P.S.:
Phroon was supposed to turn in a much better written article/announcement days ago so throw pies at him for his slow journalism skills. 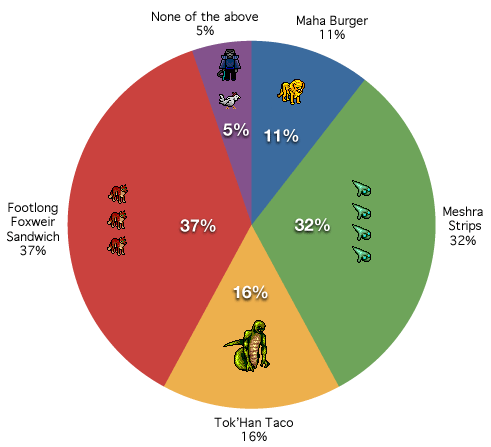 Posted by Para at 06:30 AM
Powerful Pony Protects Puddleby from Pirates 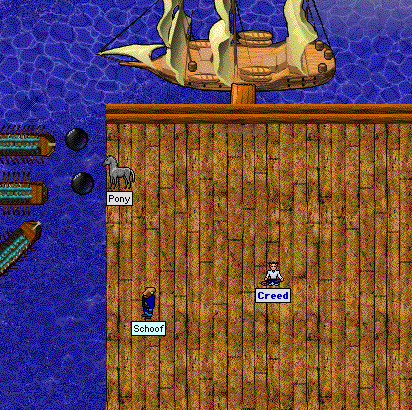 Breaking news: A brave pony is now stationed on the Puddleby docks, protecting our western shores from several Darshak ships. I've attached some sketches and a visionstone of this strong pony, who refused all attempts from me to heal him or tempt him away with grass or fresh water. 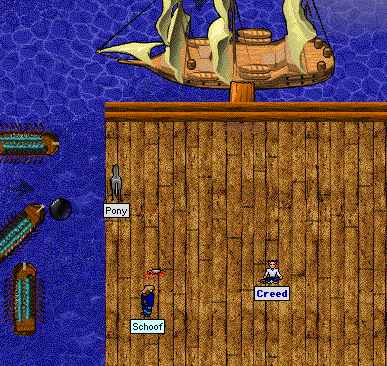 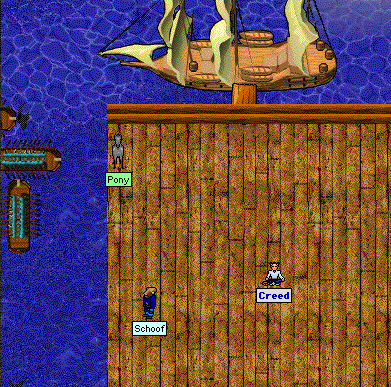 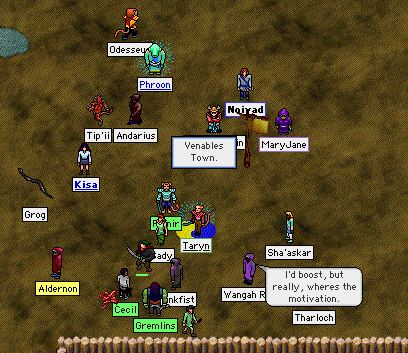 I'm writing to you live from the scene of a great triumph tonight as the Darshak have been defeated after overrunning town for over 12 hours. The scene was chaotic as wave after wave of Darshak invaded town lead by Darshak Admirals Rotbeard and Keelhaul.

Exiles fought bravely and were forced to use guerrilla tactics. Lead by Taryn and Natas, a band of about 20 exiles went through the underground to stage an assault from the hive into the northern part of town. For hours and hours, exiles fought and healed bravely in North Puddleby, with no let-up in sight.

With the leadership of myself, Phroon, the rodding of the brave Tharloch, too many fighters healers to mention, and bloodblades of Revlis, Aldernon, Andarius, and the boosting of Malbec, the citizens of Puddelby struck down Admiral Rotbeard. The tide quickly turned as Keelhaul came to the falling Admiral's aide. The Darshak rallied back behind Admiral Keelhaul and very briefly retook Puddleby.

The exiles retreated back to the hive but when they emerged, Prowl, back from a vacation on the island paradise of Metzetli, had begun their assault on the retitled Venables Town. Admiral Keelhaul called in reinforcements and retook town for mere minutes while the exiles rallied in the library and made one final push that took down Admiral Keelhaul, and dashed the villainous Darshak plans to make a third outpost out of our beloved Puddleby.

Exiles found a chest and a half-dozen or so beer kegs left behind on the dock. Everyone in town gathered on the dock to open the chest together. Kalypso tripped over the chest, opening it, to discover 5000 coins. Lorikeet, fen counting device in hand, counted heads present and divided the coins fairly to all present. Puddleby's citizens then gathered to see what could be done about the new sign in town that read "Venables Town." Since no one had a permit to take down the sign, it was left standing until such time as a proper teardown permit can be obtained. 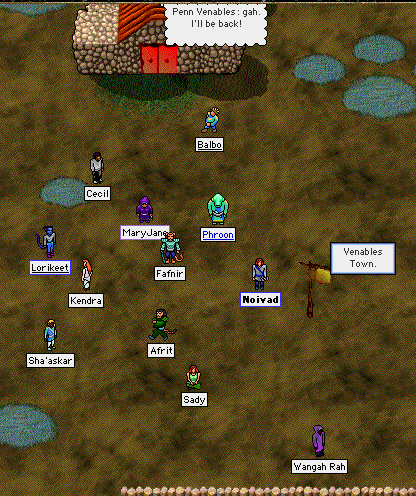 Posted by Para at 03:48 AM
Grefo Toppa Sells Again

I am writing in to report that that Grefo Toppa has started selling shirts once again. But he no longer appears to be making Forest Green shirts. He is now selling Muddy Forest shirts. I've included a sketch of these new shirts with this alert. As you can see, they are definitely not like any other standard shirt by means of color! I haven't had a chance to see what dyes would look like on it but if you catch me in the lands I'll be more than happy to report what I know about different colors.

Posted by Para at 07:36 AM
Return from Gloaming 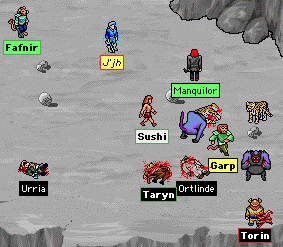 Torin reports at OWE News on an expedition to Metzetli Island and an attempt at a quick trip home through the Gloaming Caves.

Posted by Para at 12:22 AM
Local Thoom Advances

Posted by Para at 11:17 PM
Puddleby Votes on Wangah Rah

Wangah Rah as portrayed by Hoggle

Posted by Para at 10:52 PM
Exploring Gungla with Purple Haze 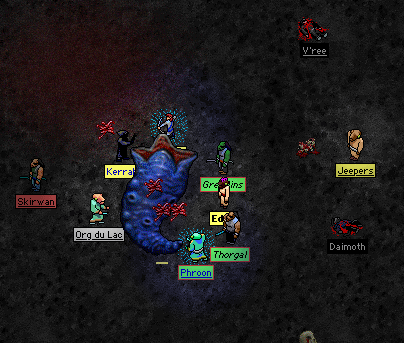 Warrior Thoom Eden reports in her most recent journal entry on an expedition to Gungla Island with Purple Haze.

Posted by Para at 05:27 AM
Torin Advances to 7th Circle

Torin reports at OWE News on his passing the 7th circle fighter's test.

Posted by Para at 05:12 AM
Waterfall Disaster 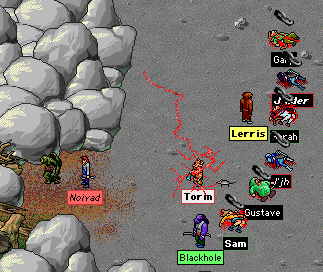 Torin reports at OWE News on a disaster and rescue at the waterfall snell.

Posted by Para at 05:07 AM
Blackhole, SpiderZo 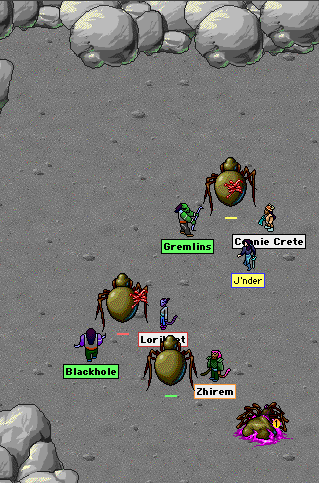 So Blackhole be huntin malachites. I know these is olives, but ya gits tha idea. Geo asked whyfer. Here be tha answer:

Be he strong? Listen bud
He's got webbers in his blood.
Can he swing from sum silk?
I dunno, it aint M***.
Hey there! There goes the Spiderzo.

With a chain and shieldstone,
At tha cave o the noids,
He rescues all alone,
By usin ranger spirit roids!

Posted by Para at 12:26 AM
Elaph Sismia and the Asklepian Staff 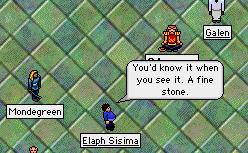 During a town incident having to do with an azurite noid and two gloaming wendies, a fellow named Elaph Sisima appeared in the Healer Hall foyer. This fellow claims to have a workshop behind the locked door in the Healer Hall.

It seems he and his cohort Rady Ann have been working on crafting a new healer staff, called an Asklepian Staff, that could potentially add to the healing craft. It uses a type of crystal Ive never heard of. He mentioned it would be called either sellenet or solumite, and is a purplish-blue crystal. Rady apparently has been trying to craft the new crystals, but several have exploded during testing, leaving only the one on Elaphs Asklepian Staff. He claims that a fellow named Chiron may have other crystals, or perhaps we can find them. He suggests Chiron might part with one, if he has it, for about 20,000 coins.

There may be a tenuous connection between the azurite noid and the gloaming wendies, as these made their appearance right after a reported moonstone disturbance. The disturbance may have occurred at the same time one of the crystals exploded in the workshop, sending shockwaves through the healers tools and alerting the creatures to the crystals existence.

Elaph claims the Asklepian Staff, when properly crafted and tuned, may be able to burst-heal several people at once, although hes says he not really sure it will do anything other than blow up.

Elaph says any crystals that are found should be given to him and Rady to craft. He says to contact him leave a note on the door. I am assuming this is the locked door in Healer hall off the foyer. I don't yet know how to leave this note. 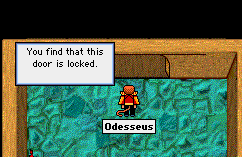 The creatures were banished, Elaph went back to his workshop, leaving a group of puzzled exiles in his wake.

Chaos Storm #551 has swept the Lok'Groton island chain. Please post any changes you have observed and wish to share with others in the comments. If you don't want to read possible spoilers, please do not read the comments.

Discussion of Chaos Storm #551 has been moved to the Clan Lord Sentinel.

The new ballot at the election hall is a follow-up to the previous What's Puddleby Eating:

e: None of the above

Posted by Para at 02:31 AM
Dandelion's Sketchbook

I've added Dandelion's Sketchbook to the TMN Favorites. Dandelion has assembled an impressive number of images from Puddleby over time, along with a useful keywording system.

Posted by Para at 12:01 AM
Kisa's Sketchbook 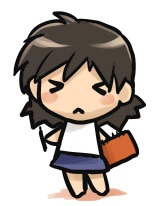 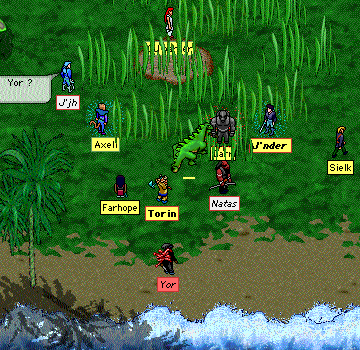 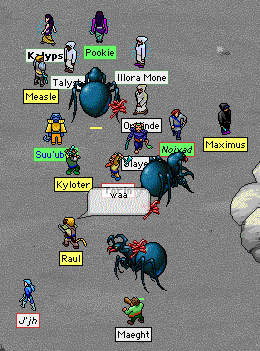 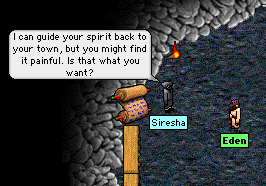 Eden reports in her most recent journal entry on an unfortunate choice she made in Lugubrion's Keep.

Skirwan has made available Stylunk 1.6. Click on Stylunk's enormous noggin to enter a world of fashion. 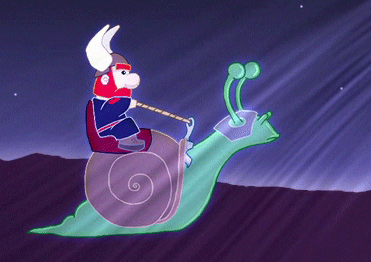 Posted by Para at 10:30 PM
Another Upcoming Trip to Pathfinding Book #1

Just wanted to remind everyone that we will be taking a trip to Book 1 on OOC: June 8 @ 2pm Eastern, 11am Pacific. It is scheduled to last 2.5 hours.

We really need some advanced healers/hitters out there for this one and an exile who knows the way! I am hoping we can get to Book 1 quickly (and without NUs or PNDs) so that those who have their stored ranks can start/finish all three chapters. If time permits, we also want to try for Book 2.

I want to hang out at Book 1 about 32 minutes, the minimum required to apply 21 ranks, so that anyone that has ranks stored and just started with Book 1, Chapter 1 can start Chapter 3. With any luck, we will spend about 15 or so minutes getting to Book 2 and anyone who has enough ranks still stored can start their training.

Posted by Para at 09:54 AM
"This Thoom For Hire" Available on Visionstone 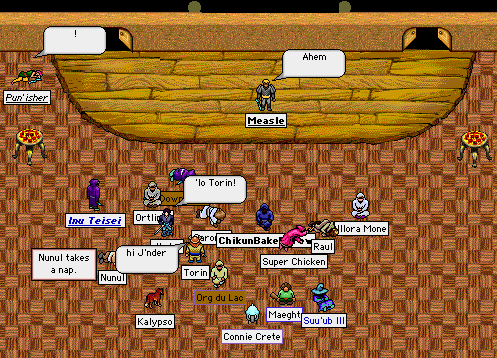 First off, the Puddleby Players would like to thank all the exiles who helped on the most recent production of "This Thoom For Hire". We were honored by the loaning of some rather valuable items for use in our production. Thank you to: Super Chicken, Jady, and Bleign. We also have to thank Starsword Eojek for his stunning contribution; the crowd really liked that (see below). 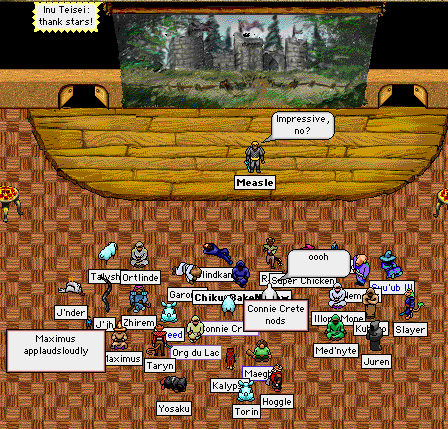 We also would love to thank all the exiles who came out to see the play. Your support keeps us going! We love putting on these plays for you.

So without much further ado, here is the link to the Visionstone on the LA site. 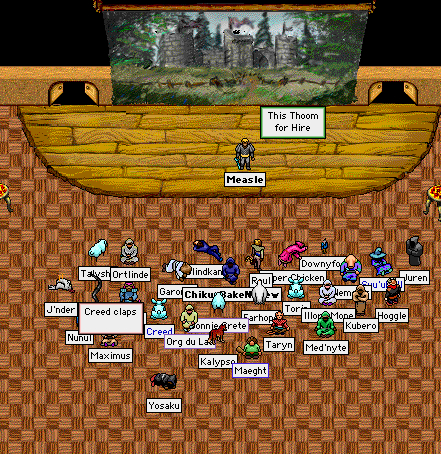 One last note, we would like to thank Measle who will be going on an extended study break and will return in time for Ts'rrin. He wrote an awesome script for this play. 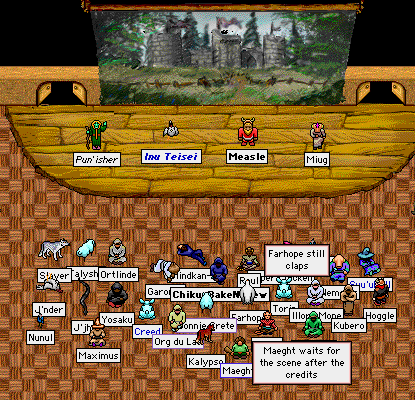 I just finished posting the interview I conducted with Measle right before he went on extended studies about the reviews of the latest Puddleby Players production of "This Thoom For Hire."

Posted by Para at 09:04 AM
Tonoto Memorial

A memorial to famous map-maker Tonoto is now in the Memorial Garden.

I thought your readers might enjoy a bit of humor in today's TMN.

A warning that these sketches contain some strong language that may be offensive to young children, thoom and alchemists.

Anyway, I happened to capture a few sketches the other day in TC when some of our favorite paint-makers had a good-natured squabble. I was hoping that by posting these, I could help generate some peer pressure on Hoggle to live up to his word and create a new Sticklord offering! 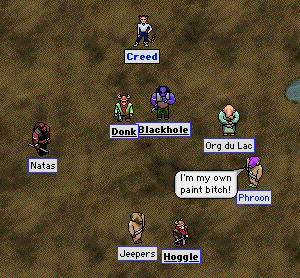 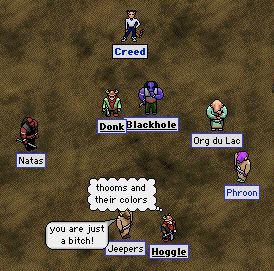 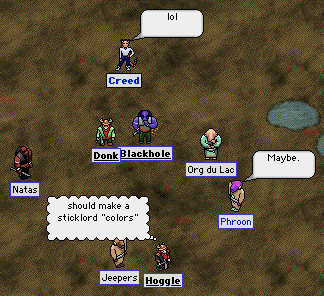 Posted by Para at 01:09 PM
Stuenora Stuck in the Shadows?

I'm a little worried about Stuenora. She has been acting strangely lately (yes, even more so than usual), and she seems unable to tune sunstones.

Has anyone else noticed this?