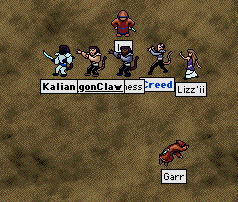 I hate to be an alarmist, but . . . you may want to post the attached sketch as a bit of a warning to your faithful readers about what starts to happen when there isn't enough news forthcoming . . .

Posted by Para at 10:30 PM
Measle Says the Word

Measle reports on saying the wrong word at the wrong time in his most recent journal entry.

Posted by Para at 10:15 PM
Abyss 2 EATen by the Exploration and Adventure Team 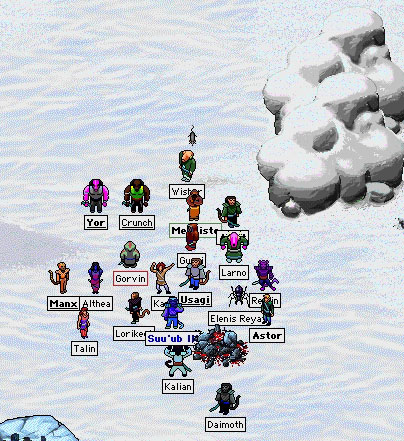 The Exploration and Adventure Team conquered the second plane of the Abyss today, and after scanning both with pathfinder and mystic, no third plane was found. While this is the first time that the second plane has been controlled and scanned, it doesn't mean that a third plane definitely does not exist. Those present for today's expedition are pictured above.

Posted by Para at 08:00 PM
Ansset Gets Another Strange Stone 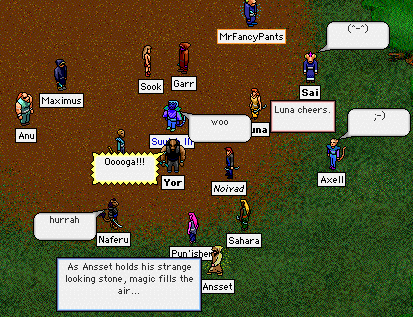 During the last Full Moon, Ansset assembled a small group in order to replace the Strange Stone that recently crumbled on him. Led by the fantastic rod points Bast, Suu'ub III, and the one-and-only Mr. Fancypants, the group plowed their way to OC4 very quickly. The Orga Magician was vanquished soon after and the Strange Stone was Ansset's! Ooooga!!! 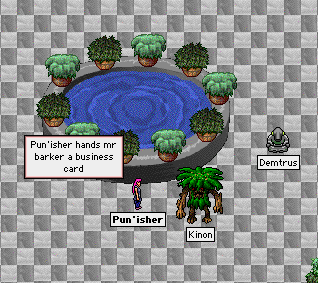 I have submitted a full report with the PPD, however, I left out the following evidence of the search for Kinon. As I was investigating, something told me to go to the theater. Upon entering I ran into a Mr. Barker and a Mr. Nice Thoom. They were very nice folks who answered all my questions. Here are some pictures of the exchange. 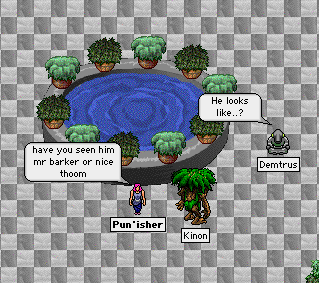 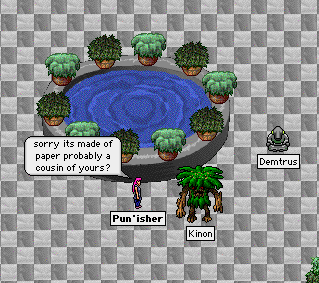 Posted by Para at 09:33 AM
Going-Away Party for Lassair 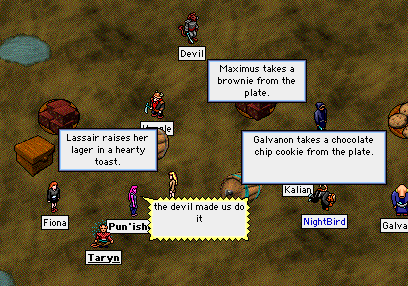 We had a nice going-away drink- and food-fest to say goodbye to Lassair, who intends to explore other lands. The party was quite successful; Lassair fell to stout/lager/beer at least three times. As you can see by the image, it wasn't our fault. There was another sinister force involved.

Posted by Para at 09:19 AM
Locust Problems 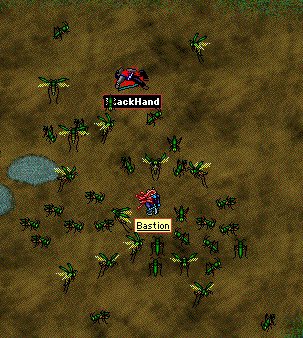 Puddleby has been suffering from a locust invasion. 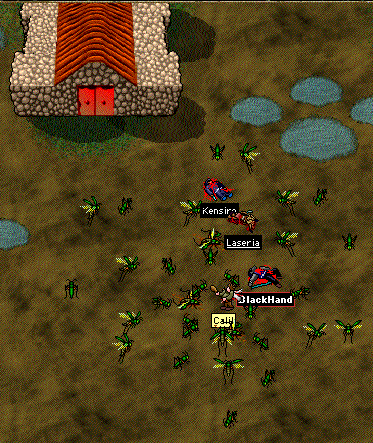 Although we wiped out the Locust invasion yesterday, we missed some of them. Apparently, some are invisible and invincible. Here are some pictures of the invasion, indicating what we are trying to do to get the invisible ones out! 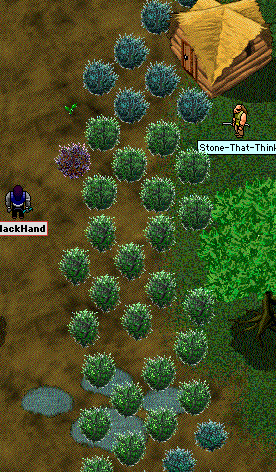 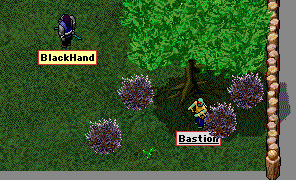 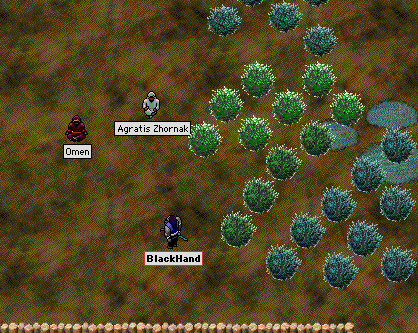 These horrible invisible creatures continue to roam around Puddleby, and we hope to remove them soon.

Posted by Para at 09:01 AM
PAG's Pitch Cave Breakthrough

Noivad sent the following report on PAG's recent progress in exploring the Pitch Caves. The following message may contain spoilers. If you don't want to read possible spoilers, please do not read the information below.

Last week, PAG (the Pitch Assault Group) made significant progress in its quest to explore the Pitch Caves. The group managed to make it past PC10 and into previously unexplored parts of the cave system that is located somewhere deep below the Orga Stronghold. There were several new discoveries including lava, a mysterious book, 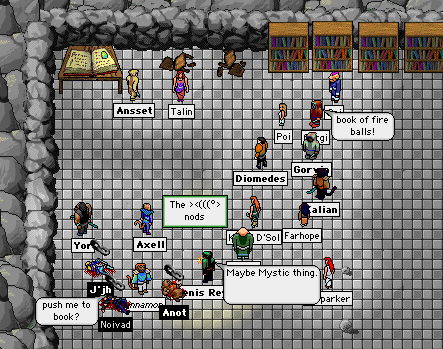 and a small pool with what looks like man-made walls. 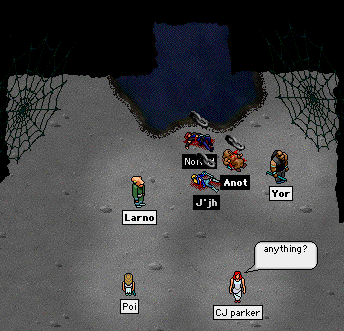 In yesterday's trip, PAG was able to examine these startlingly blue mushrooms for spores of any type, and to complete its mapping of the Pitch Caves. 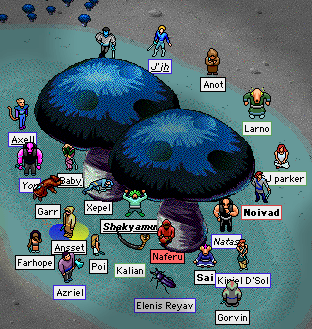 Missing from this picture are Talin and Sahara, who could not stay until the end. And the blue person hiding behind the 'shroom is Diomedes.

The significance of these items is currently unknown . . .

Chaos Storm #439 has swept the Lok'Groton island chain. Please post any changes you have observed and wish to share with others in the comments. If you don't want to read possible spoilers, please do not read the comments. 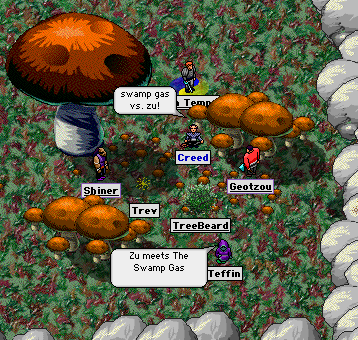 I thought I'd pass along an amusing sketch of a confrontation that I, for one, never thought I'd see . . .

Thanks to Rangers Trev and Treebeard, these two UN-natural enemies had a bit of a throwdown while a group of us waited to enter the Valley.

The bout ended in a draw. Perhaps one day we'll have to organize a rematch!

Posted by Para at 09:37 PM
Audition for Measle and Zaerion 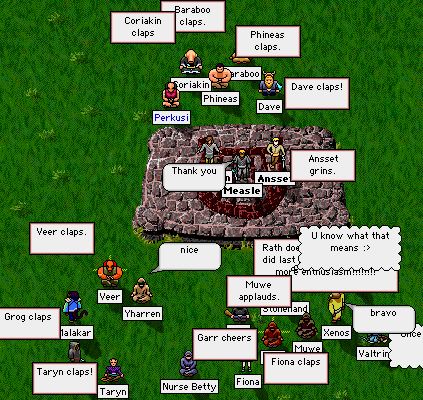 In his most recent journal entry, Measle reports on the Bard audition held for him and Zaerion.

In other Measle-related news, I have added Measle's journal to the list of Favorites in the right-hand column. 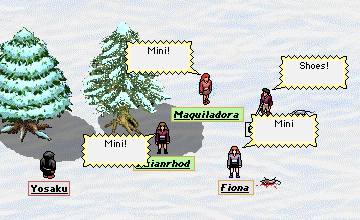 I don't know how newsworthy this is to anyone other than members of the Order of the Mini, but we were all very excited to see our sister Maquiladora come out of the library the other day after a very long bout of studying. It has been quite a while since four Minis were seen hunting together, so we posed for a sketch in the cold and snowy weather on the cloud. You can see Yosaku trying to get out of the sketch, but I thought he should be proud . . . he was a fortunate dorf indeed to be in such select company!

After the cloud hunt, we irrepressible four joined a Valley hunt. As you can see from the second sketch, this one didn't start out so well. But our luck did improve, and we ended up having a great hunt with many creatures skinned and much experience earned. I'm sure I speak for all my sisters in saying it was great to hunt together and especially with Maqui. Don't stay away so long this time, sis! 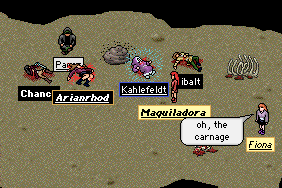 Unfortunately, no one has sent any news nor have there been any journal entries this past week. Not good . . .

Recent updates to the ELF Blog include:

Garr (pictured above in flames in Town Center) has announced a contest for musicians. Read more about the contest at the Clan Lord Sentinel.

Thought I would let you guys know that I finally passed the 6th circle fighter's test.

Chaos Storm #437 has swept the Lok'Groton island chain. Please post any changes you have observed and wish to share with others in the comments. If you don't want to read possible spoilers, please do not read the comments.

I witnessed an amusing incident in TC recently, and I managed to copy down a few quick sketches to share with fellow exiles.

I came on the scene a bit late, but evidently Baby had been up to her favorite trick and had thrown paint on Daimoth (and perhaps others). I believe someone had also thrown paint on Baby, but I'm not sure who. What I saw was Baby surrounded by sun zu, 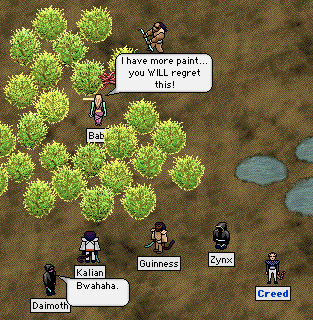 which was growing rapidly as she tried her best to cut it down. 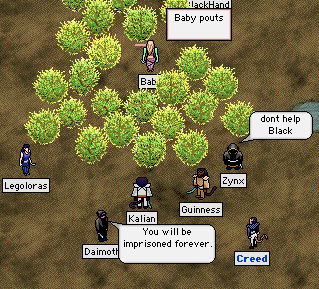 Baby finally realized that she could pendant out of the zu patch, 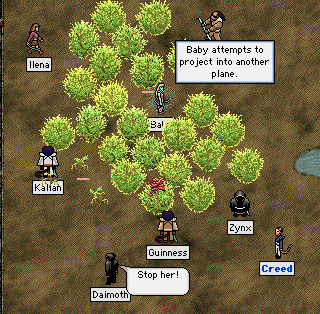 and the others were pretty much powerless to stop her. 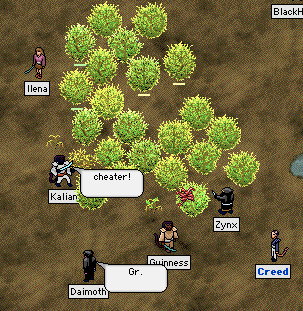 Daimoth, Kalian and his party harvested the zu, but Baby still managed to return and hit Kalian with her pink paint. This particular incident appears to have ended in a stalemate. 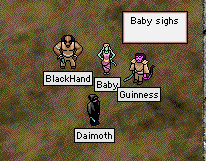 With a smile,
Creed

Posted by Para at 11:36 PM
A Strange Arrangement 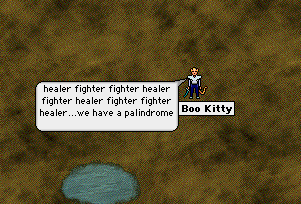 Boo Boo Kitty noticed a strange arrangement of healers and fighters in Puddleby:

There was a strange pattern of healers and fighters. By Jove! I discovered . . . a . . . palindrome! 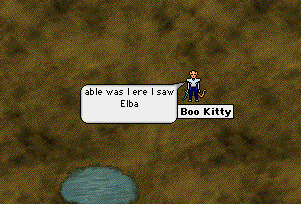 Posted by Para at 11:26 PM
Sometimes You Get the Flower, Sometimes the Flower Gets You 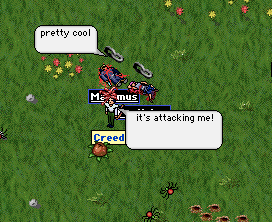 I have a couple of horticultural questions for the Puddleby community.

While I'm an expert at farming regular zu, I don't know a lot about some of the other flora of our fair island. For example, I was with a group on Gungla Island recently (OK, that's not our fair island), and we ran across a flower that actually seemed to attack us. I managed to make a sketch (see above), but I couldn't quite capture its fierce aspect as it reached out long tendrils or petals toward me to attack.

I would also like to ask about ku flowers. Connie Crete showed me one in north field the other day that she said was just sprouting (see below). 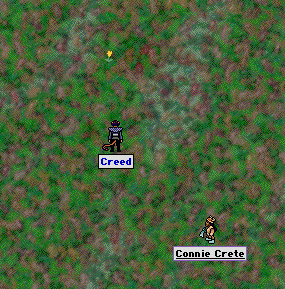 We watched it for quite a while and witnessed no growth or change. I could hardly tell it apart from a yellow poppy, actually. Can anyone comment on what to look for and how to harvest or cultivate a ku flower in the future? 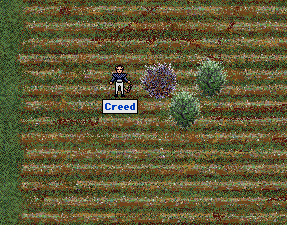 As you know, Chance and I are very active in the zu-farming business. One of the keys to the success of the Creed Cooperative is our constant research into the best methods and locations for farming zu.

Of course, I cannot share our best locations. But I thought I would save my fellow zu farmers a bit of heartache and a few seedlings by revealing a spot that is NOT fit for zu. The nicely tilled patch in south town near the entrance to the mystics' area used to be an excellent place to farm, but it now appears barren. As you can see by the attached sketch, my last attempt to farm there resulted in not a single seedling. 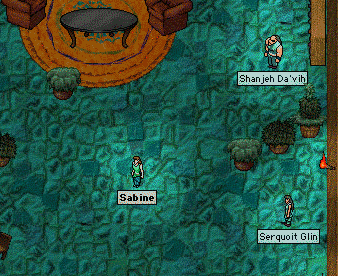 The members of Clan Destine are proud to report that our very own Sabine, the lovely Sylvan healer, has passed her fourth-circle test.

Posted by Para at 11:40 PM
Noids and Flowers

Azriel reports on a recent expedition to the Pitch Cave and the discovery of some Nightli flowers in his most recent journal entry.